Spain is one of the favorite tourist countries due to the many tourist places in Spain that draw attention from all countries of the world in which you find blue beaches and vibrant cities including Barcelona and Madrid and the wonderful night life and charming white villages in the interior of Andalusia in addition to a number of monuments that It dates back to before the Roman era and the medieval castles, as well as its many distinctive and varied restaurants and cafes. Spain is thus considered a mixture of enchanting cultural and natural landmarks and charming and distinctive service facilities.

Learn through this article on the most important tourist places in Spain and the most famous tourist attractions and tourist cities in Spain.
1- The town of Bessalo: 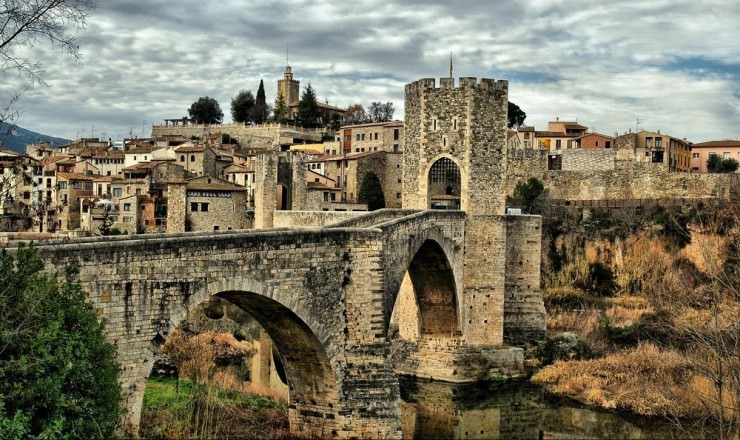 The municipality of Pisallo is a municipality located in the province of Girona of the Catalonia region in northeastern Spain and has an area of ​​4.9 square kilometers. The town was the main nucleus of the Middle Ages as this city made the architecture of the Middle Ages exceptional. It is rich in many churches dating back to antiquity, which are among the main attractions, the most famous of which is the Monastery of Saint-Pierre from the twelfth century, the Church of St. Vicenc, the Church of Saint Mary, the Church of the Old Hospital of Saint Julia, the memorial of the ancient wall, Jewish baths, and Many of the tourist places in Spain, which bear witness to the time when the Jewish and Christian communities lived in harmony without any conflicts, find Christian monuments mixed with the Jewish landmarks simply. The town of Pessalo is classified as one of the most beautiful and distinctive countries, with narrow streets belonging to the old Jewish Quarter and charming old buildings. All this made it a wonderful example that contains history and culture and attracts many visitors every year.
2- Frigiliana: 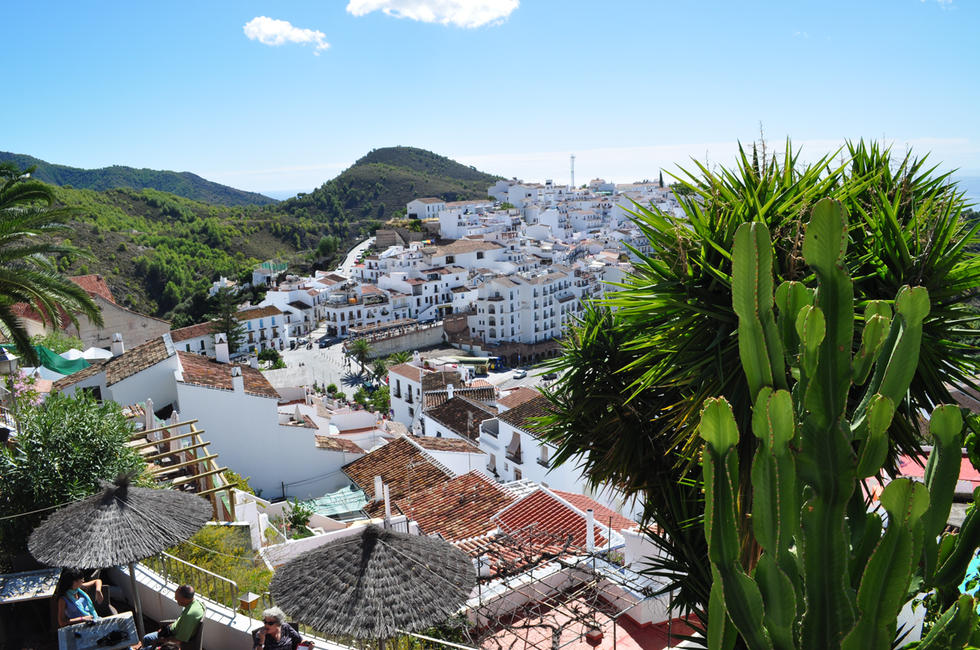 The municipality of Frigiliana is a municipality located in the province of Malaga, in the Andalusia region of southern Spain, with an area of ​​41 square kilometers. It was voted by the Spanish Tourism Authority to become the most beautiful village in Andalusia and it is constantly voted in addition to that it is a city with a wonderful historical background and is one of the most important tourist places in Spain. And what distinguishes it most is the village of Costa del Sol, located 6 km from Frigiliana and the village is an interlocking group of mazes where narrow cobbled streets with white houses lining the sides and iron balconies that contain the pots of plants, jasmine and lavender to be Do a magical scene captivating your breath.
Points of historical interest in Frigiliana include the ancient fountain, Fuente Vega, the San Antonio Church, the old silo, Real Expoceto, and the Church of Santo Cristo Lagana. It has many great spots for picnics, hiking, horse riding, and many excellent stores selling pottery and ceramics, including decorative paint shops with Arabic design. In addition to the many restaurants and pubs that are located on the roof to enjoy your meal amid the scenic nature of the valley and the village. 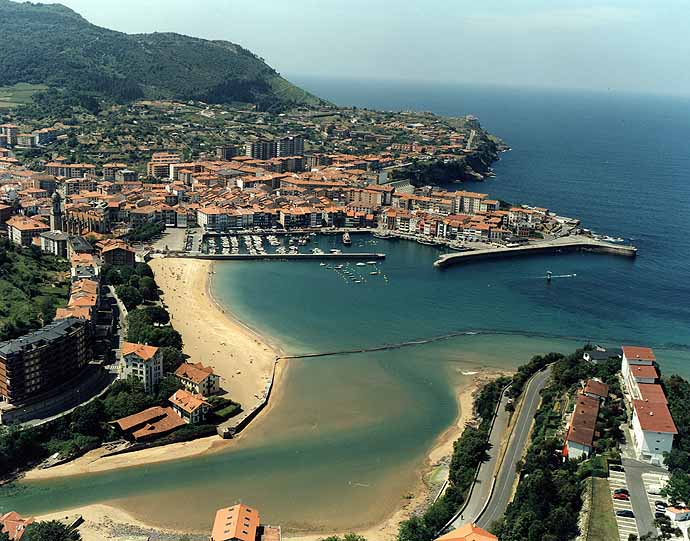 Likayitayo municipality is a municipality located in the province of Biscay, which is located in the Basque region in northern Spain and covers an area of ​​190 hectares. Originally it is a small fishing village and it has many tourist attractions, it contains many wonderful beaches, bars and restaurants that feature a variety of seafood delicacies, ancient churches and distinctive cafes. The streets of Likitayo give an opportunity for tourists to enjoy the abundant artistic and cultural heritage, including the 15th century Santa Maria Church and the island of San Nicholas, which can be reached on foot when the tide is low.
And the city is characterized in the summer in the mild climate, where many wonderful beaches and resorts that attract tourists to enjoy a summer vacation in a charming and pleasant atmosphere.
4- Ronda town: 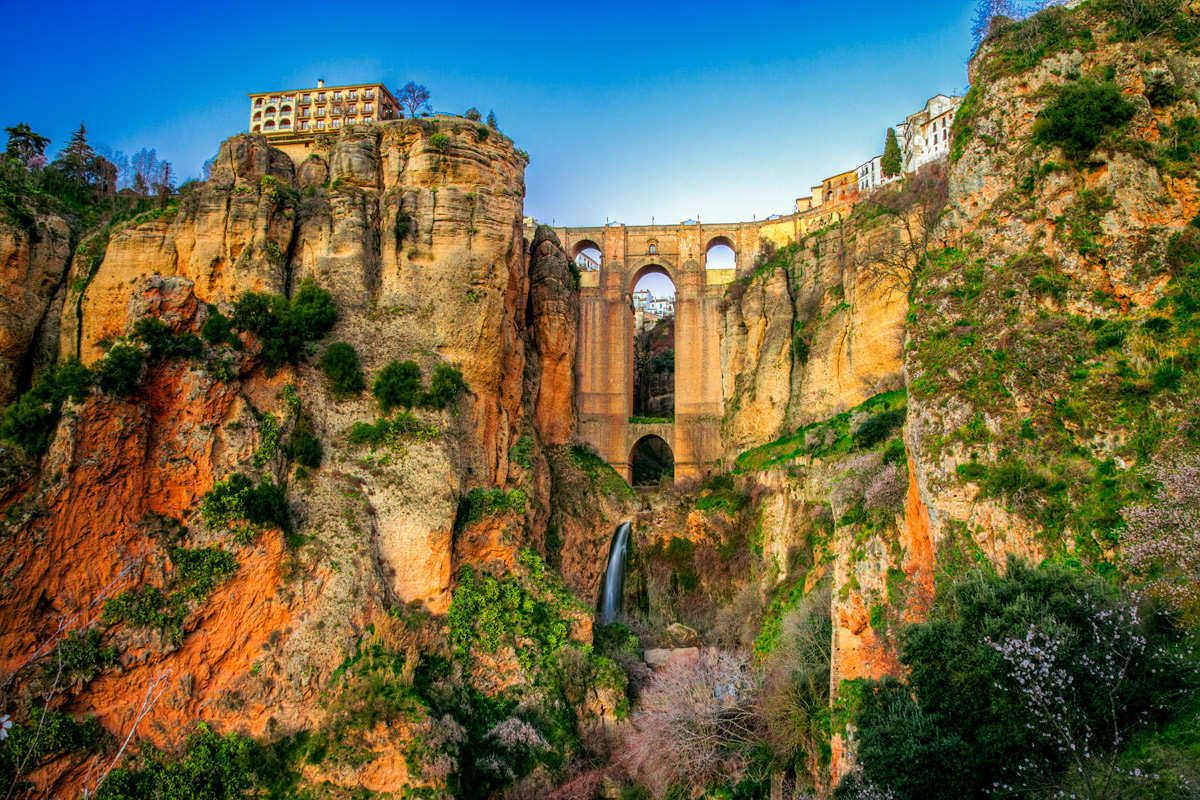 Randa municipality is a municipality located in the province of Malaga, in the region of Indonesia, in southern Spain, with an area of ​​481.3 square kilometers. It is located on a mountainous area about 750 meters above the ground and a river passes it into two halves, and it is the third most visited city in Andalusia. It was named after Tsar Julius.
The area is picturesque with its beauty because of its mountainous terrain and green valleys, where the city is surrounded by mountain areas full of Spanish fir trees in addition to many settlements dating back to prehistoric times, specifically for the Stone Age period including rock paintings in the cave “eva de la pileta And there are three bridges considered one of the most famous tourist places in Spain are the Roman Bridge and the old bridge, also known as the Arab Bridge and the new bridge that extends to the valley and is considered one of the longest bridges in it as it extends to a height of 120 meters over the bottom of the valley. And in Randa there is an arena for bullfighting and is the oldest in the history of Spain, where it was built in 1784 AD. Beneath the city there are strange baths dating back to the 13th and 14th centuries AD.
Among the most prominent tourist attractions that attract attention is the Church of Saint Mary, which was built on the ruins of the Grand Mosque after the departure of the Muslim Arabs from Spain. All this made it one of the most beautiful tourist cities in Spain, which tourists visit every year to see its wonderful and varied history. 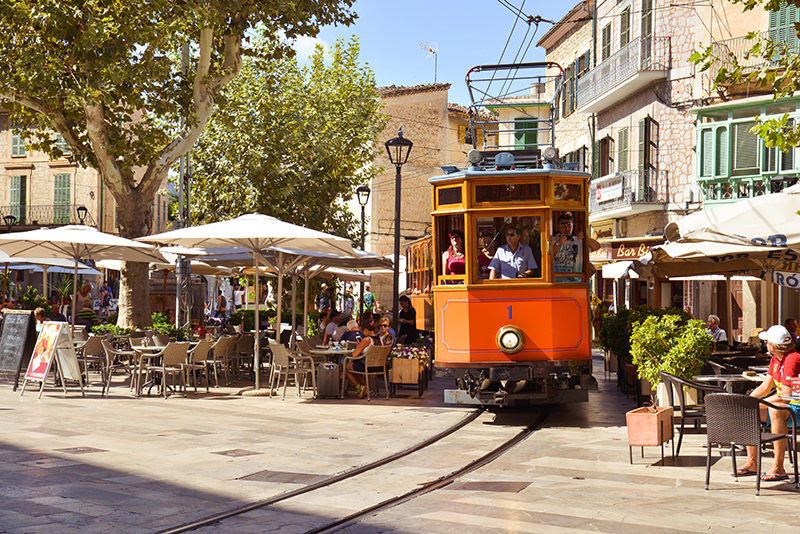 The municipality of Sóller is a municipality located in the Balearic Islands region in eastern Spain, with an area of ​​42.8 square kilometers. The city is located in the heart of the Orange Valley, where it is famous for its abundant citrus orchards, which is one of the main sources of income that depend on it. When you step into it, the place will attract you, as the city is characterized by a charming magical character, which you will find clearly in the charming old streets, historic houses dating back from the eighth century to the sixteenth century, and the nature of its tolerant people.
One of the distinctive tourist experiences is the antique wooden tram trip that extends 28 kilometers through 13 tunnels around the scenic landscape.
The main attractions are “St. Bartomeu” Church, the Balearic Museum of Natural Sciences and the Botanical Garden which includes many plant varieties and the covered market in addition to a number of bars, cafes, distinctive restaurants and shops that serve all your needs, making it a popular place for residents and tourists on Both.
There are many, many tourist places in Spain that you can enjoy while traveling and tourism in Spain. In the end, here we have gathered for you the most important tourist cities in Spain, which attract attention from all over the world.