A family tourist program in Spain for a period of 7 days .. You can not miss her visit with the family ..

A family tourist program in Spain … Dear tourist Spain is one of the most beautiful European countries, so you should visit it to spend an enjoyable trip with your family, and Arab travelers give you your tourist program so that you can visit the largest number of beautiful tourist attractions in it.

A family tourist program in Spain ..

Today “the first, the second and the third” .. Visiting Madrid .. 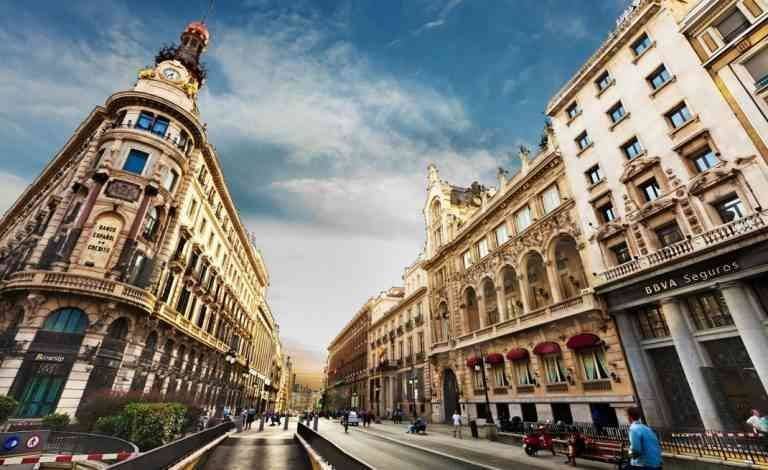 – Today, “the first, the second, and the third” .. Visiting the city of Madrid .. Dear tourist Madrid is the capital of Spain as it is one of the most beautiful and most important Spanish cities as it has a number of natural tourist places such as beautiful gardens and historical places such as museums and palaces, so we recommend the following. The first day. . 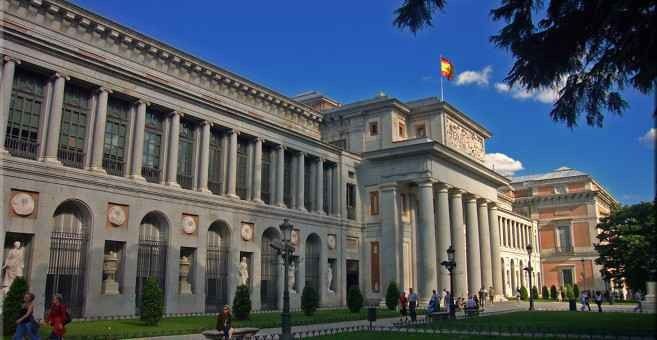 The Del Prado Museum “The Del Prado Museum” is a must go to, as it is the largest historical museum in Spain and it will help you and your family get to know artworks of the most famous artists like Peter Paul and other artists in addition to jewelry, gold artifacts and rare porcelain pieces. The museum also organizes exhibitions and activities that you will like , The museum starts working from ten in the morning until eight in the evening As for the entrance ticket, it costs 14 euros for a visitor and 23 euros with a guide. “The Reina Sofia Museum” is one of the most important tourist destinations in Madrid. Also, the first and second floors are dedicated to exhibitions that are held continuously. It is fun to attend and take souvenir photos with them. The museum operates seven days a week except on Tuesday from ten in the morning until nine in the evening and the entrance ticket is 6 euros per person. “Royal Palace in Madrid”, dear tourist, visiting this palace must be at the beginning of your tourist schedule due to its beauty and great importance, as it is the seat of the royal family in Spain, but it is currently used in times of official celebrations only, you will get to know civilization in Spain in the past through statues, luxury furniture and wonderful decorations Which covers the walls in addition to containing a museum that displays to visitors various weapons as an ancient arsenal, it is sure that it will impress your family and certainly take pictures of you in this wonderful place. The second day .. 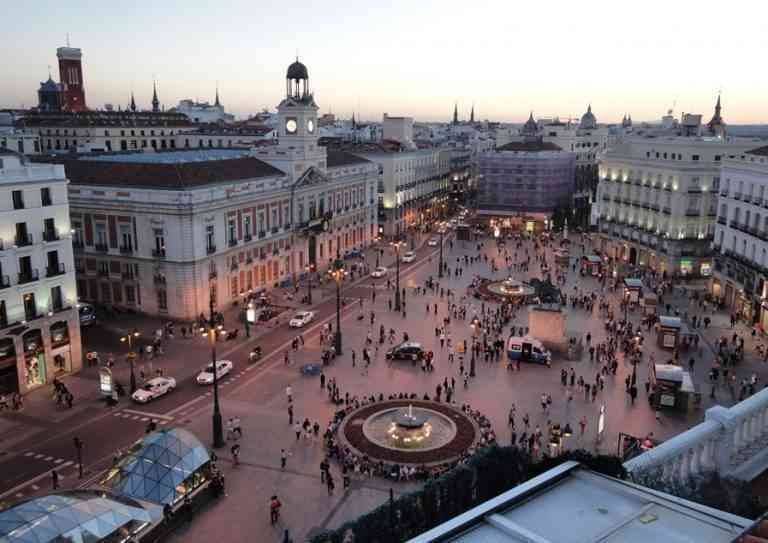 Puerta del Sol Square The second day, spend fun times with your family on a tour of the Madrid squares “Puerta del Sol Square” is located in the city center and it has a great pleasure to have a beautiful architectural design as there are a number of statues and shops, so you have to take a tour with my dear The tourist does not miss to take souvenir photos with it, it is necessary to take a free tour also in “Plaza Mayor of Madrid”, which is the most famous square in Madrid. As for the night, you should shop. Dear tourist, the pleasure of shopping in Madrid at night on the “Gran Via” street in the city center, it is the most famous streets you will find Many stores that offer different products Dressed up, bags, watches, antiques, etc. So buy souvenirs and your needs, you will find in the street a number of cinemas, you must enter one of them. The third day .. 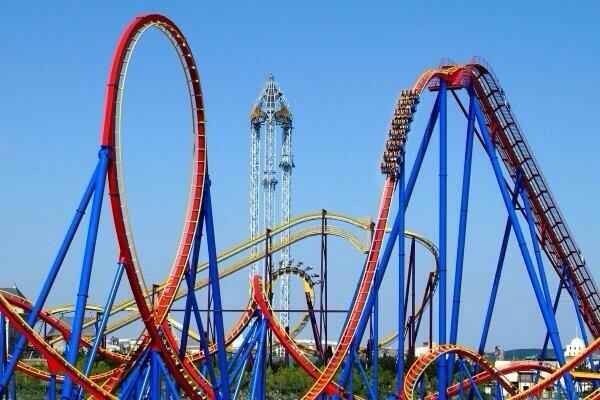 Warner Bros Theme Park Visiting “Warner Bros Theme Park” is one of the most beautiful entertainment cities in Madrid, when you visit it you will live an atmosphere of adventure and fun with your family where wonderful games such as the missile and the death train and the game of super man and the game of rotating chairs are best for your children as they will enjoy car rides Collision, swing, and water rafts, for more enjoyment you have to enter the cartoon characters area that offers shows for characters like Scooby-Doo. After spending an enjoyable time in the cabarets you should visit parks like Sabatini Park and Retiro Park and, at night, have a meal in one of the Restaurants After this day’s tour, we advise you to eat it in “Zahra” restaurant, which is a distinctive Arabic restaurant in Madrid that offers visitors the most delicious Moroccan dishes such as couscous, grills and appetizers, as well as Spanish cuisine. The “Pasha” restaurant is also one of the beautiful restaurants, which is a Syrian restaurant that offers its visitors a variety of dishes. Delicious oriental.

Today “the fourth and fifth” .. Visiting the city of Barcelona .. 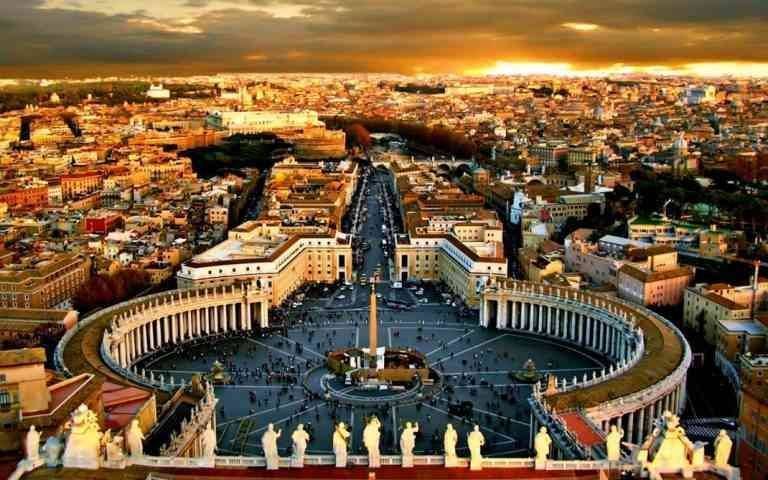 Today “the fourth and fifth” .. Visiting the city of Barcelona .. Barcelona is one of the most famous cities in Spain, as it is the capital of the Catalonia region and it is characterized by its views of the Mediterranean coast, as it is surrounded by the Coesrola Mountains, so you should visit it to see the various sights. the fourth day .. 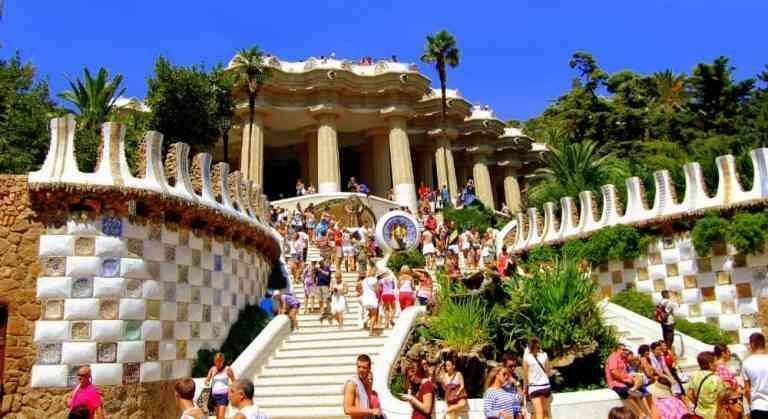 The Garden of Jewell “Museum of the History of Barcelona” explains to visitors the history of Barcelona from Roman times to the present, as it displays the history of Catalonia, the palace consists of 3 wonderful floors to include artifacts and excavations for thousands of years. ”Palace of Joel” This palace belongs to the family of Goel, who lived with it in the past and the palace is distinguished With its magnificent architecture and mixing between Spanish civilization and Gothic art, the palace includes a wonderful collection of collections that are worth seeing to take pictures of them, such as antiques, furniture, carpets and colorful lamps, the museum starts working from ten in the morning until five thirty in the evening The ticket price is 12 euros for the visitor. “Park of Jewel” It is the historical public park in Barcelona, ​​there is a neighborhood of Lasso in Gracia, you must take a tour with it with your family to enjoy seeing various animals and wild birds of different types, perhaps the most beautiful of which are parrot, eagle fingers and hummingbirds, the garden begins to work from eight in the morning until six in the evening. The entry ticket price is 8 euros for adults and children 7-12 years old, 5 euros. On the fifth day .. 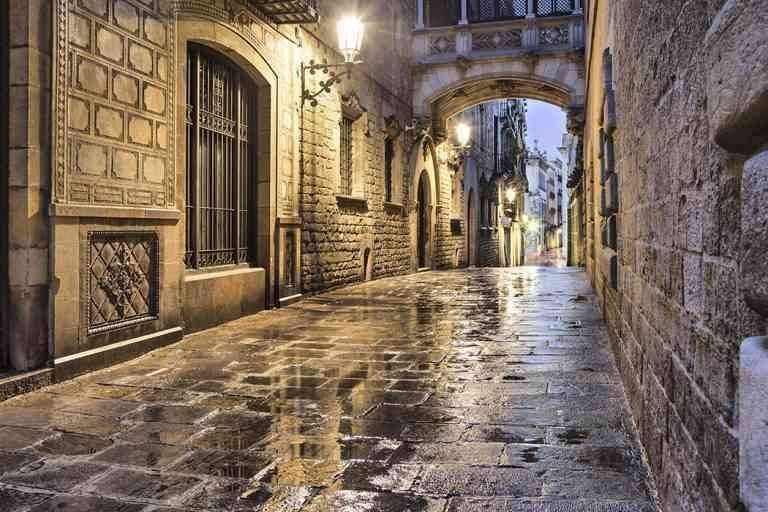 The Gothic Quarter in Barcelona “Plaza de Catalunya” is one of the most famous and most important squares in Catalonia. It has a special pleasure to own a number of wonderful fountains, and what distinguishes it is its proximity to beautiful tourist attractions such as the “Gothic Quarter in Barcelona”. When visiting Barcelona it is necessary to visit this neighborhood that dates back To the tenth century AD, where the beautiful architecture, antique walls and narrow alleys have a Picasso museum and shops on the sides of saliva selling wonderful souvenirs representing this neighborhood. After visiting the Gothic Quarter he went to visit the “Barcelona Zoo” established in 1892 AD and it is one of the most modern zoos in the world And for Be despite that, it includes large numbers of rare animals, such as the white gorillas, so that they have become one of the most visited parks in Spain. There is a garden for children, the garden begins to work from ten in the morning until five in the evening The ticket price is 19 euros for adults and 12 euros for young people until the age of 12 As for children under the age of 3 years, admission is free. You can take a stroll at night on this street, it comes to life, day and night. When you visit him, you will enjoy the joyful atmosphere of the Samar which continues until dawn. Your family will surely be able to take memorial photos next to people wearing distinctive clothes of their colors in addition to the shops that line up on both sides, if you want to have a meal in a restaurant You should go to the restaurant “Abu Khalil” where the most delicious dishes from the Lebanese cuisine.

Today, “the sixth and seventh” .. Visiting the city of Granada .. 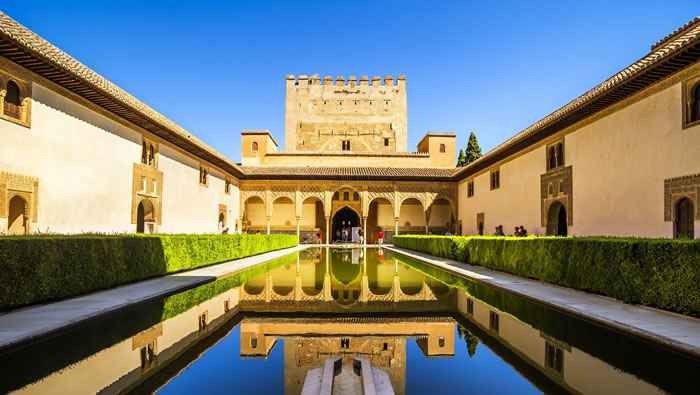 – The sixth and seventh day .. Visiting the city of Granada .. Dear tourists, spend two days in Granada to end your trip in Spain by visiting the most beautiful cities in which the great Andalusian civilization explains the beauty of Islamic architecture. * The sixth day .. 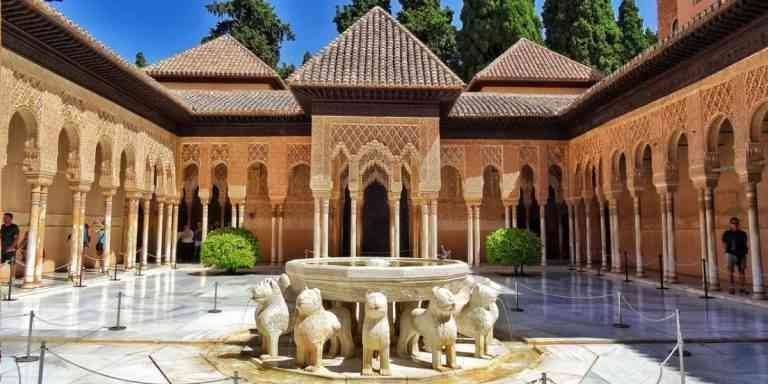 Al-Hamra Palace Al-Aziz, the first tourist attraction that you should visit in Granada is “Al-Hamra Palace”, it is the most beautiful Islamic landmark in Spain, it was established in 1238-1273 AD and more than 4 million tourists go to it annually when you visit it you will see wonderful fountains in the form of statues for a seven, we advise you By taking commemorative photos next to it, and you must enter the hall of the Kings decorated with motifs, generous Qur’anic verses and poems that illustrate the beauty of the Arabic language and Islamic art, the palace starts working from eight thirty in the morning until six in the evening every day, and the ticket price is 14 euros for adults and 8 euros for children. ”Paradise Corporal in Granada Its “is located between Al-Bayazin neighborhood and Al-Hamra Palace, and it is a group of wonderful gardens next to a wonderful palace in the middle of it is the palace of“ the corporal ”. The sultans were visiting it to relax and of course you will enjoy its wonderful colors and Quranic verses on its walls. It is one of the world heritage sites, it starts working from eight thirty to six in the evening and the ticket price is 9 euros. The seventh day. 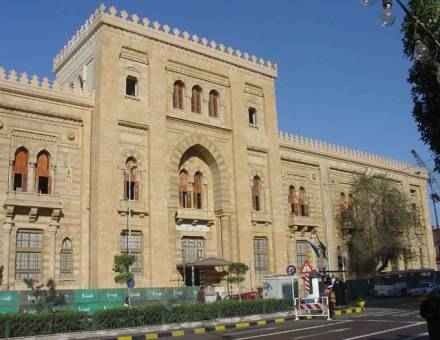 The Granada Archaeological Museum: Visiting the “Granada Archaeological Museum” includes wonderful and rare artifacts, there is an old palace dating back to the sixteenth century and the museum tells us about various civilizations, the most important of which is the Arab-Islamic civilization as well as the Roman and Phoenician civilization in the country. Dear tourist to spend fun times with your family playing In the middle of nature, you should visit “Sierra Nevada Park”, which is considered one of the most famous parks in Granada. It is a natural reserve because it has great views of lakes, rivers and mountains that are covered in snow and you can climb it as beautiful mountain animals live in it so take pictures of it, do not miss the experience of surfing Z ice it.