Learn about Neuschwanstein Castle in Germany

Hamdi Istanbul is one of the recommended Istanbul restaurants

The fame enjoyed by the tourist cities may be a blessing and a curse. The city has all the ingredients that make it a first-class tourist region that helps revive the economic situation and improve the conditions of its residents, but at the same time it causes it to turn into a hotspot with crowded tourists, its resources wasted.

From Venice and Barcelona to the Taj Mahal and Bhutan, we are reviewing a group of famous tourist cities that have become unsafe as before, as they have become very crowded, so you should avoid visiting and searching for other alternatives. 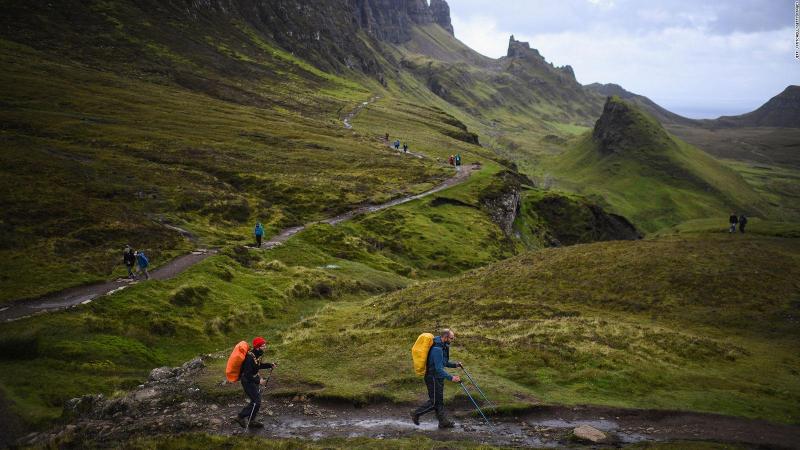 In 2017, the infrastructure of Scotland’s largest island came under a lot of pressure, after cars and buses carrying thousands of tourists passed through narrow corridors, causing extensive damage to the island’s infrastructure.
Many tourists and visitors to the island complain of excessive noise and overcrowding, which makes some visitors sometimes have to urinate in public places.
The police advised visitors not to visit the island unless they had already booked accommodations.
If you very much like to visit the island, it will be better to avoid visiting it in the summer. Wait for the number of tourists to decrease until you can explore it without suffering from the overcrowding of visitors. 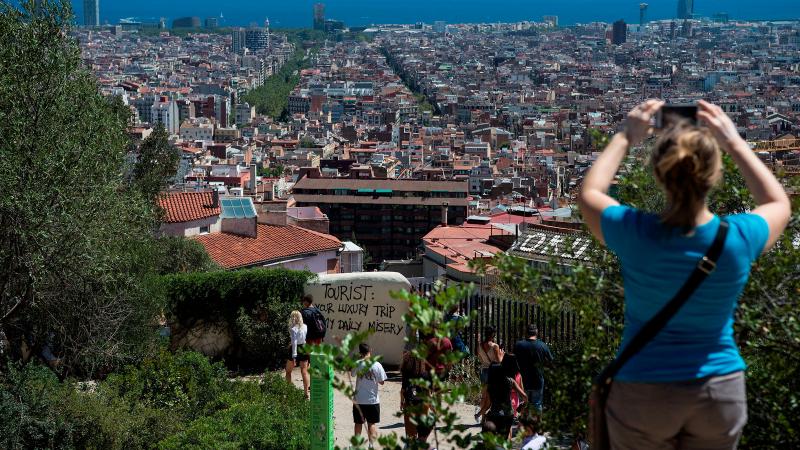 In 2016, the number of tourists in the Catalan capital reached 34 million, angering the local population and this anger was reflected in the graffiti drawings they painted on the walls throughout the city; protesters stormed the beaches in Barcelona in August 2017, and they carried out many violent actions and acts.
But if you have to go there remember that you will have a great time walking along Las Ramblas. Instead, head to Valencia for an enjoyable holiday full of culture and art, and you will enjoy delicious cuisine. 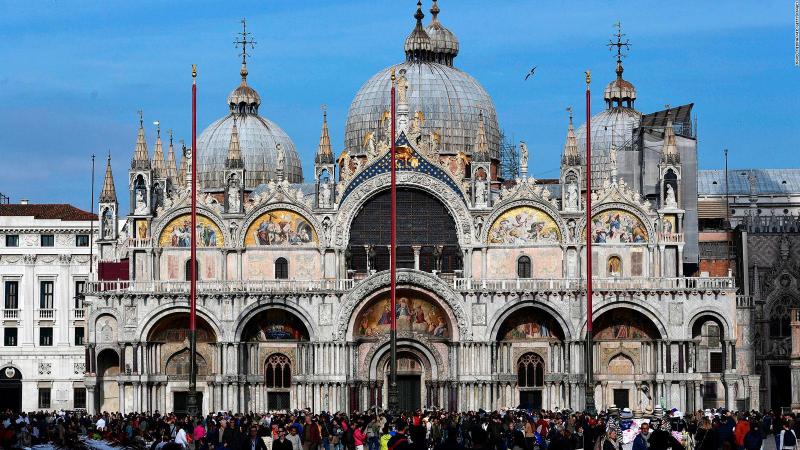 Tired of people who never stop taking selfies on the Rialto Bridge and taking a lot of cruises through the Judica canal, the Venetians took to the streets in 2017 to vent their frustration and anger.
The city’s population decreased to 55,000 in response to the increasing number of tourists, especially since more than about 30 million people travel there every year, and the government decided to prevent the sailing of giant ships (more than 96,000 tons) as of November 1, 2014, according to a statement issued in The conclusion of a meeting in which the relevant ministries and local authorities participated, and the ferries were prevented from sailing on the Judica Canal, which will reduce traffic operations in front of St. Mark’s Square by 25 percent and pollutant emissions by 50 percent, according to the government.
If you have to go there, stop using the selfie stick, and try to explore the city quietly. Also try to eat in local restaurants instead of going to the main tourist areas.
And you can exchange your trip to Venice with another to France, as the French region of Annecy is home to a network of wonderful canals and seas, and also features buildings with amazing architecture. 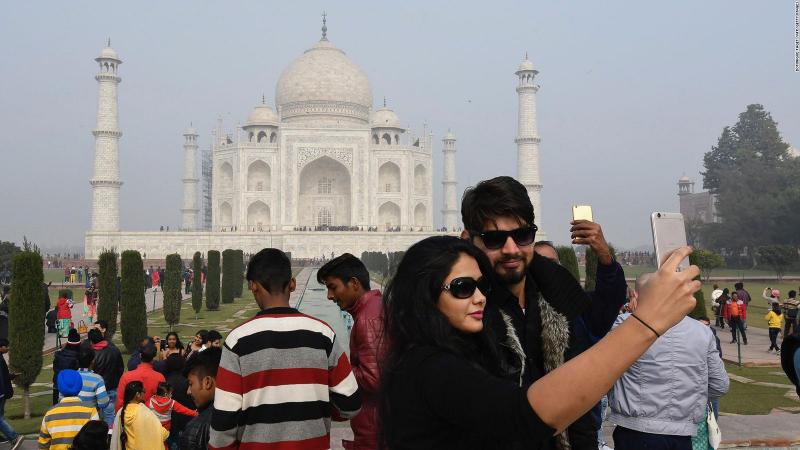 Read:For lovers of cherry blossoms … Tourist destinations will do the trick

More than 8 million tourists go to visit this amazing tourist building every year, which makes visitors experience a difficult and very chaotic experience given the large crowds that are all trying to enjoy visiting one of the most important tourist attractions in India and the world.
There is also a big difference between the prices of local tickets, which amount to 40 rupees, equivalent to 60 cents, compared to paying tourists and foreigners 1000 rupees, equivalent to 15 US dollars.
If you really want to go, wake up at dawn, and go to the Taj Mahal Palace at six in the morning, the area is quieter and less crowded at this time. Instead of going there, you can visit Humayun’s tomb, which may not be just as important, but the crowds gathered around it are not as large as in the case of the Taj Mahal. 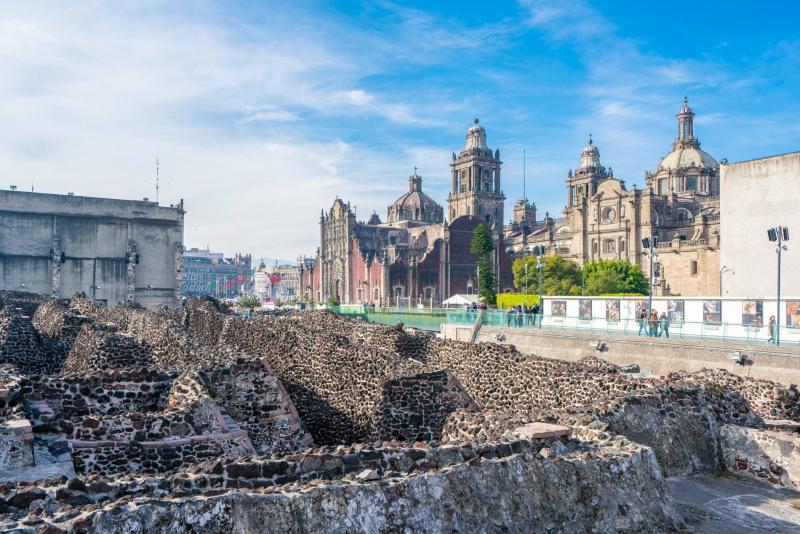 Bhutan tries to reduce the impact of tourism and its overcrowding with tourists by imposing daily fees paid by travelers, and its policy is to require visitors to pay 200 or 250 dollars per day depending on time of year, with an additional cost of $ 40 for groups of two people or individual travelers.
Local residents have expressed concerns about the impact of crowding and the large number of tourists on the fragile ecosystem.
If you want to go there you have to respect the country’s Buddhist traditions and avoid dumping garbage. Alternatively, you can visit the neighboring Indian state of Arunachal Pradesh full of ancient Buddhist monasteries and the amazing mountains that you can explore without paying the same huge daily fees.

Read:Learn the most prominent trends of Gulf residents when traveling during the current summer season

With Moscow threatening to withdraw its place from the World Heritage List due to severe overcrowding, Dubrovnik decided to take strict measures and measures to reduce the number of tourists.
The city limits the number of people who can climb its fences in the fifteenth century at an average of 4,000 people per day, and 10,388 did so in one day in August 2016. The city’s mayor also planned to cut the number of cruise ships entering the old port.
If you want to go there, you have to travel independently, and take a cruise affiliated with local companies in order not to spend more money, and you can stay in the nearby Cavtat, which includes a wonderful old town and beaches that are not crowded with tourists.

There are very few places in this world that have wonderful sunset views like Santorini, but the small island is about to collapse. In 2017, nearly two million people visited the island, and 850,000 people made cruises.
The island’s mayor has decided to set a certain number that will allow him to visit the island, so that Santorini does not lose its fascinating charm.
If you really want to go there, you should stay in a local place and avoid riding donkeys, which take tourists up and down to the port.

The most unusual hotel experience in the world

The 6 best activities at the Viking Ship Museum in Oslo

Not just theories … travel makes you a better person and these reasons!

Report on the advantages and disadvantages of Jumeirah Mina Al Salam

The 3 best apartments for rent in Fujairah Recommended 2022