By Bernard Gagnon – Own work, CC BY-SA 3.0, https://commons.wikimedia.org/w/index.php?curid=6231801
Those wishing to travel to the city of Shahara and visit the ancient landmarks of Yemen will find the road very bumpy, but the masterpieces of the unique tourist places, which are usually only seen by adventurers, such as the Shahara Bridge, the Fort of Nazareth, the city’s gates, and its ancient monuments. The city is located between the mountains of Al-Ahnum in Amran governorate, northwest of Yemen, at an altitude of 3 thousand meters above sea level.

The most important landmarks in the city of Shahar

The Shahara Bridge is one of the most famous and important tourist attractions in Yemen, but it is one of its symbols and icons that are known around the world, and the bridge was built between two very high mountains to connect them to shorten the time and effort that was required to land under the deep valley and climb again, and the matter was It is almost impossible for people to travel all that distance, especially if it comes to transporting goods and livestock.
The bridge, which is also called a “contract of shabara”, links the mountains of Fiche and the Prince’s fame, which are the names of two regions in the city itself, where there is a narrow and very deep groove between them and a steep slope. Yemeni to face the difficulty of moving between places
The bridge was built between the years 1905 and 1908 AD by the architect Saleh Abdullah Al-Soudi, who chose that particular area because the distance is close between the two mountains and the knot can be linked in a way that ensures the survival of the bridge, which is 20 meters long and 30 meters wide. 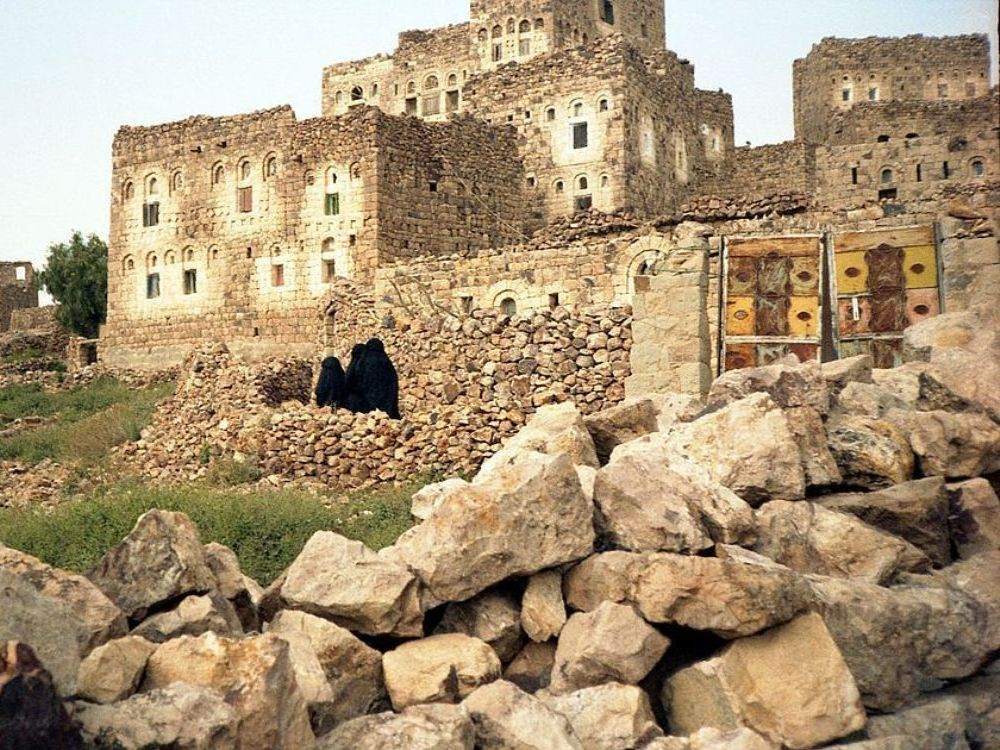 It is the most famous fortress in the city and it is also called Dar Nazareth, which is an Ottoman building located on a high hill on the western side of the city (Shahar Al Amir). Its construction date back to the tenth century AH and overlooks the mountains of Al-Ahnum from the south. The fort consists of the main wall and the gate that includes rooms for the guards, and inside it there is the main building consisting of four floors, in addition to a small mosque and a large water pool called the shipment and a number of towers and buildings.

The city of Shaharat al-Amir includes only two roads to enter it and the third road is the one that connects it with the al-Faysh al-Fayshah through the Shaharah Bridge. Therefore, the city was well protected by a number of defensive fortifications, and there are gates in its entrances that were established by the imams who ruled the city.
The four doors are each in the door to victory in the west of the city, the door to slaughter in the south side, the door to the cypress in the southeast, and the door to the fame of the fiche that leads to the road to the bridge, and while most of the thick wooden doors and their defensive towers and their walls remain to this day, the door of victory has been removed To make way for cars in place.

The city is mostly historical and archaeological buildings, so you will have an archaeological museum open to nature that takes you to discover the amazing Yemeni architecture, but the most important features are in a group of important buildings such as the Imam Al-Qasim Mosque which dates back to the year 1025 AH and a number of other mosques and historical schools Known as the tag.
Learn more about the city of Shahara and its famous bridge in this video: