Dubai recently identified 10 per cent of the emirate’s area as a natural reserve for local and migratory plants, animals and birds under the name “Al Marmoum Reserve”; to be the largest tourist environmental destination jointly implemented by 9 government agencies and implementing more than 20 vital projects and aiming to attract one million visitors annually.

Al-Marmoum Reserve is the first non-walled desert reserve in the country that is open to the public, its area has nearly tripled, and embraces the largest nursery of plant life in the Emirates on an area of ​​40 hectares and will include more than a million seedlings of various types of local plants in order to preserve the biological diversity in Dubai.

The reserve includes more than 20 environmental, entertainment, cultural and sports projects that are jointly implemented by 9 government agencies, including 10 platforms for observing wild animals and birds, observing the stars and sunsets, practicing yoga and an external theater that hosts performances from around the world and can accommodate 350 people, in addition to the Mohammed bin Rashid Al Complex Maktoum Solar is the largest of its kind in one location in the world with a capacity of 5000 megawatts by the year 2030, as it hosts more than 20 championships and sports events throughout the year with the participation of more than 20 thousand people.

Al-Marmoum Reserve is the largest sustainable environmental, tourism and recreational project in the country that aims to shed light on one of the most important desert reserves in the Emirates and the region that embraces wildlife is among the richest and most diverse and provides a haven for a large variety of animals and birds threatened with extinction in addition to hosting many programs Environmental and innovative and diversified tourism projects targeting various

The segments of society are formed by a pioneering project of its kind that adopts the concept of environmental entertainment in many fields and interests and translates it through vital projects that combine environmental education and awareness and between tourism and entertainment.

The project comes to reflect a development vision that is at the heart of the planning policies adopted by Dubai, which is to preserve the local environment and the components of the Emirati desert nature, enhance its aesthetic privacy, and provide natural habitats for wildlife threatened through natural reserves.

The “Marmum Reserve” is one of the largest protected areas in Dubai, covering about 10% of the total area of ​​Dubai and is home to about 204 species of birds, as well as 26 species of reptiles in addition to 9 types of mammals.

The reserve includes 39 species of plants, and the sanctuary provides sanctuary for 19 species of animals and birds threatened with extinction, and has the highest concentration of large flamingos, “Flinter-Flamingo” in a desert region of the country.

The largest renewable energy project in the region

The Al-Marmum Reserve is home to one of the largest renewable energy projects in the region using solar energy, and the archaeological site “Iron Crackers” dating back to the Iron Age more than three thousand years ago.

The reserve will host more than 20 projects, facilities, and programs and environmental, recreational, sports, tourism and education, which will be open to people throughout the year, so that they together constitute a unique and distinct experience that attracts an audience of various interests.

Among these projects are more than ten platforms for observing wild animals and birds, observing the stars and observing the sunset, as well as for practicing yoga, in addition to setting up an open theater that hosts various cultural, artistic and recreational shows, along with the establishment of the Al Marmum Center for the Biosphere and the Al-Marmum Scout Project directed to the youth, in addition to launching various sports projects and programs And others.

Among the most important projects and facilities that will be included in the Al-Marmum Reserve are “Animal and Bird Watching Platforms” and upon its completion the reserve will include more than ten platforms distributed in different sites devoted to monitoring nature with its various elements and vocabulary among them, a platform for observing the Arabian Oryx herds that have been installed at the highest slope in the reserve to provide a field Wider view.

The exterior of the platform was designed in the form of the head of the Arabian oryx, and there is a platform for watching wild animals that was designed in harmony with the surrounding environment, where the plants in the vicinity form a natural shade for the pioneers of the platform, allowing them to monitor the animals without approaching them and disturbing them.

There are several platforms to monitor different types of birds, including the “bird’s nest” platform, which is designed in the form of a bird’s nest through the random formation of wood sticks that form the nest structure, which provides a visual barrier between birds and visitors, which allows the observer to follow the view without interruption and without causing confusion to the birds. “Bird’s Nest” is on the edge of the reserve’s water bodies, providing bird watching and taking pictures of beautiful scenery.

There is a platform “interlocking tapes” for bird watching in its innovative design in the form of interlocking tapes with holes in irregular shapes that reflect the random formation of the surrounding environment in addition to the “cocoon platform” with a unique engineering design, in which the holes are distributed in the form of rhombic beautiful and harmonious.

Through the two platforms, visitors can observe birds from all angles without disturbing them, as well as take beautiful pictures of the place.

A space for meditation and relaxation

Among the platforms that will be a “space for meditation and relaxation” and enjoying the captivating nature scenery is yoga and observing the sunrise and sunset.

The area of ​​the building is 1500 square meters and its design was inspired by the sand dunes forms in the area and it consists of an indoor yoga hall and two utility services covered by a sand dunes umbrella that provides shade for outdoor yoga practitioners and places to watch the sunrise and sunset.

The yoga hall will be air-conditioned and with a scenic view of the desert extension with its captivating scenes. In addition to the inner hall, there is a main hall extending on an external platform with multiple levels, allowing those wishing to practice yoga outdoors amid the desert nature with its various terrain, where the pioneers of the platform can monitor the sunrise and sunset from their site Distinguished in an experiment that delights the eyes and the soul, and cultivates tranquility in the heart.

Among the platforms that will constitute a kiss for astronomers is the “star observation platform”. The project was designed in the form of five main platforms in an arrangement inspired by the pattern of the solar system. The platform aims to be a magnet for star-watching air and is characterized by its unique location in the depth of the desert, where the clear sky enables clear visibility of the stars as the site is distinguished from the city noise and its proximity to the services at the same time.

The Marmum Reserve will be the incubator for the largest nursery of its kind for plant life in the Emirates, “Emirates Plant Nursery”, which extends over an area of ​​40 hectares, to include various types of plants found in the country in addition to some fruit trees.

The nursery aims to contribute to achieving the strategic goals of the Emirate of Dubai to expand the green area in the emirate and preserve the local plant species and protect them from extinction and document them as part of preserving the national heritage and expanding the production of local environment trees for use in horticulture and tree planting as well as the production of local fruit trees and preserving their characteristics Characteristic and contribute to reducing the costs of implementing gardening and afforestation projects by relying on relatively low-cost nursery plants.

The nursery will serve as a training and qualification center for school and university students and researchers and academics in this field.

A series of sporting events

Al-Marmoum Reserve will host a series of sporting events within a continuous program throughout the year, and the program includes more than 20 championships and sports events that are expected to attract more than 20 thousand people, among these activities are running and bicycle races.

The reserve also includes the longest desert cycle paths for bicycles in total length of more than 100 km.

The sports season at Al Marmoum also includes the Dubai International Bicycle Tour, which is organized by the Dubai Sports Council and the Sandstorm Handicap Competition, which includes a series of exciting and challenging challenges that require high physical capabilities.

The design of the “outdoor theater” is in harmony with the vocabulary of the desert nature in the reserve, as it is inspired by the formation of desert bushes over the dunes.

It consists of a performance and artistic performance platform with a display that spans the entire platform in addition to service rooms and terraces at various levels to give various view angles to the audience and topped with an open dome design also inspired by sand dunes lends a desert dye to the design and provides silhouette space for the audience.

The theater – which seats 350 people – will host a variety of artistic and lyrical performances from across the region and the world within an art and entertainment schedule that will continue throughout the year.

Marmoom Center for the Biosphere

The “Al Marmoom Biosphere Center” – which is located in the heart of the Al Marmoum Reserve – is concerned with studying sustainable development and managing the policies of protected areas in the Emirate of Dubai and will be a center for sustainable environmental tourism and aims to be the main source of specialized ecosystem management practices in the UAE and the region and the development and provision of specialized expertise in the field The environment as a reliable reference for best practices in preserving the environment.

As for the “Al-Marmoum Protected Scout” project, it is the fruit of cooperation between the Dubai Knowledge and Human Development Authority and the Dubai Scout Commission and the Emirates Scout Association, where it aims to develop the capabilities and skills of young generations physically and culturally, and stimulate the spirit of originality, connection with the land and positive communication with the natural environment through a diverse package of activities The various areas that were designed for the Al-Marmoum Reserve to enhance the concepts of environmental protection and the rich wild and desert life that characterizes the reserve and live the experience of learning by doing, planting positive values, exploring oneself, taking challenges and developing the ability to solve problems.

As part of the “Al Marmoum Reserve” project, the Mohammed bin Rashid Solar Complex will be connected to the reserve, where it will be provided with clean energy to conserve the environment and promote sustainable development.

Clean energy will be produced on the Al Marmum Protected Facilities through the Dubai Sun initiative to install solar photovoltaic systems, in addition to installing “green charger” stations in the park for electric cars, to encourage people to use environmentally friendly cars.

The latest smart meter technology will also be provided in the park, which features advanced features that contribute to promoting a smart and environmentally friendly lifestyle, in addition to installing the smart “Manarti” column in the park with innovative features and applications that include charging electric cars, interactive screens, internet service and smart sensor systems that measure the surrounding environmental factors.

It remains to point out that Al-Marmoum protectorate projects are involved in the implementation of nine entities in Dubai: Dubai Municipality, Dubai Sports Council, Dubai Water and Electricity Authority, Roads and Transport Authority, Media Office, Tourism and Commercial Marketing Department, Knowledge and Human Development Authority and the Mohammed bin Rashid Foundation to support small and medium enterprises and Miras. 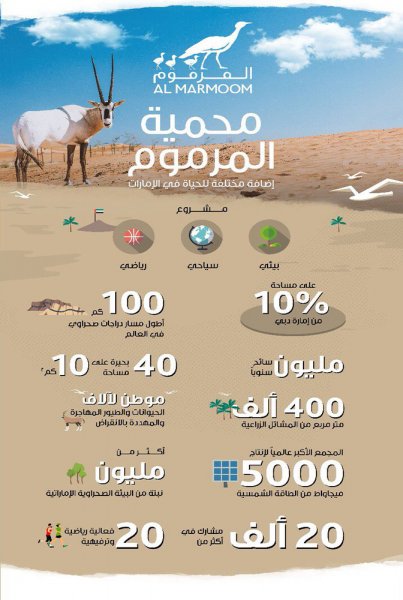 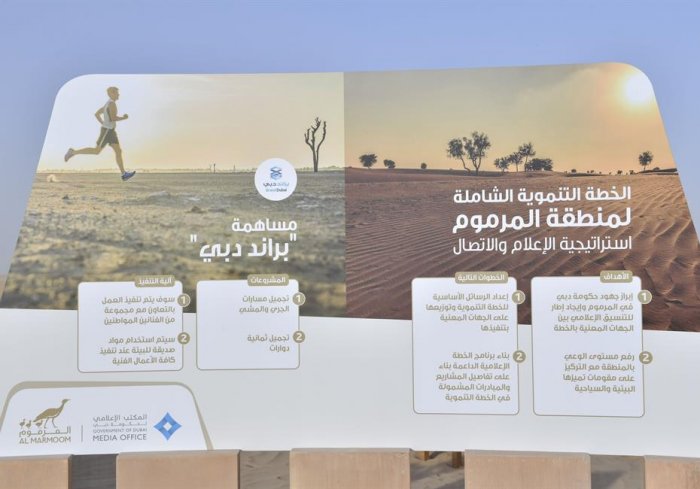 Al Marmoom .. a nature reserve for migratory plants, animals and birds in Dubai