Cafés in Tunis .. Find out the best cafes in Tunis

Cafes in Tunis .. Dear tourist, Tunis has a group of cafes that are considered one of the most important tourist attractions of the city and Arab travelers give you the best ..

Dear tourist, Tunis, the capital, is the first city in tourism for green Tunisia, and by it we assure you that you will spend the most beautiful times among its beautiful streets, comfortable colors and authenticity represented in its beautiful heritage, it has many tourist attractions that appeal to all who see it and one of the most important tourist attractions in the city is The cafes that spread there, which provide a wonderful atmosphere that fascinates visitors in terms of design, beautiful artistic inspiration, colors and longevity, you should visit them and take memorial photos with them to remember those wonderful moments.

“Sidi Shaaban Café” .. the most famous café in Tunis 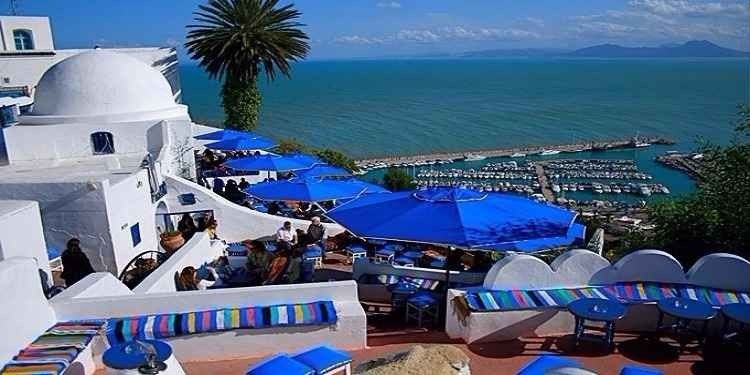 “Sidi Shaaban Café” .. Sidi Shaaban Café is considered one of the most beautiful cafes in Tunis, dear tourist, so tourists from all over it go to spend the best times in it, there is the café in Sidi Bou Said region, which is famous for being an important tourist area in the capital Tunis because of the presence of different tourist attractions in it And distinguished by its atmosphere and its beautiful traditional character and the most important features of this café built from ancient stones and the furnishings in it are traditional and indicate the beautiful Tunisian heritage, it is a mat and kilim and of course it is taken care of cleanliness and change annually, this cafe gets wide Arab fame And abroad too A number of important artistic personalities visited him, such as French artist Patrick Royal, and he photographed his song “Café des délices” in this wonderful café, as Abdel Halim Hafez visited, and pictures of clips from one of his films were visited, as well as Kazem El Saher and Angham. Do not miss it, visit it and take souvenir photos with it. 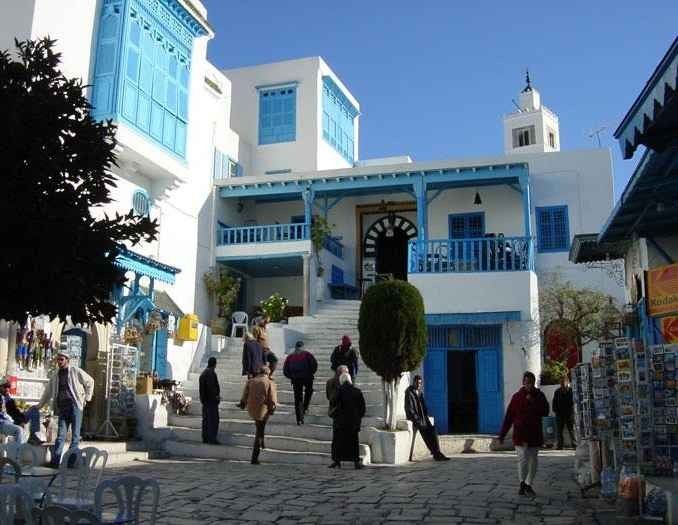 “High coffee” .. located near the cafe Sidi Shaaban, and it is considered one of the oldest and most important cafes in Tunis, and this cafe was restricted in the past in the era of the albatas to the upper class of the rich and notables of the country and is now open to the public with all its layers, the cafe is distinguished by its style Beautiful that combines the Arab and Andalusian character and is also distinguished by its high staircase, the cafe is known as the Dokan shop in Tunis, and it is distinguished by its furnishings of mats of various colors handcrafted from the cichlids, it is also decorated in red and green as the shrines of the righteous saints of God in the country and on its walls oil paintings are hung For the most famous painters He is a Tunisian painter who was a friend of the family of Ben Said, who has owned the café since its inception in the mid-19th century. Of course, you have to try sitting in the courtyard at the last amphitheater and also spend time on the balcony that overlooks the sea and the city. The moments. 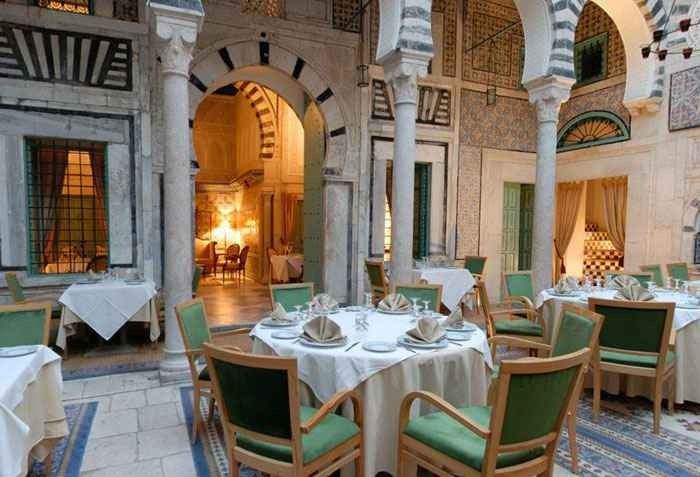 “Hammouda Pasha House” .. It is considered one of the most important cafes in Tunis and this is due to its history as it was established in the nineteenth century at the hands of Sultan “Hamouda Pasha” and he is a darling lover of calm because entry to it through a corridor after him two winding sheds to prevent the entry of noise to find after That marble floor, beautiful doors and windows, some accounts say that the Sultan built it to live in his lover, and the other saying is that he created it to house his wife, Princess Azizah Othman. 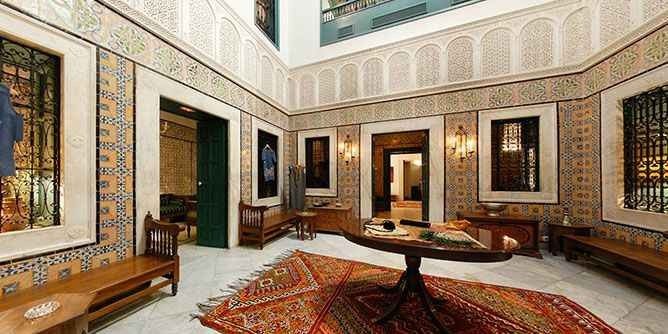 “Dar Al-Jalah Cafe” .. is one of the best cafes in Tunis and there is the Nahj al-Jalah region in Tunis and it was modified in 1987 AD so it placed bulbs for poor lighting in each shed and the furniture indicates the Tunisian traditions at that time as neighborhoods of different carpentry techniques such as turning, Refinement and drawing, and the place has another indirect entrance to a beautiful and quiet hall, of course, you will love to sit in it. As for the patio, it is characterized by Italian marble and ceramic tiles. The place is also characterized by its pleasant climate, where the light is dim, while the eating room is distinguished by its distinctive carpets and wonderful natural flowers so I take pictures of them. 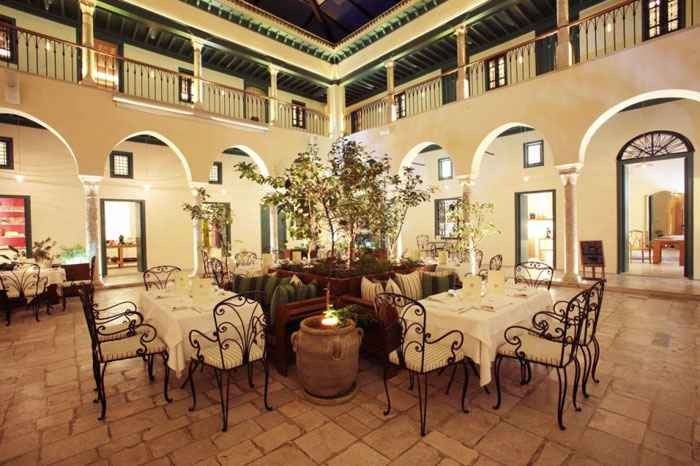 “Al-Attarin Café” .. It is located inside the Al-Attarin Hotel, and it is characterized by its large square. You should buy souvenirs from the offered products such as traditional furnishings, boutique cages and jewelry. The hotel is located in the Attarin market. 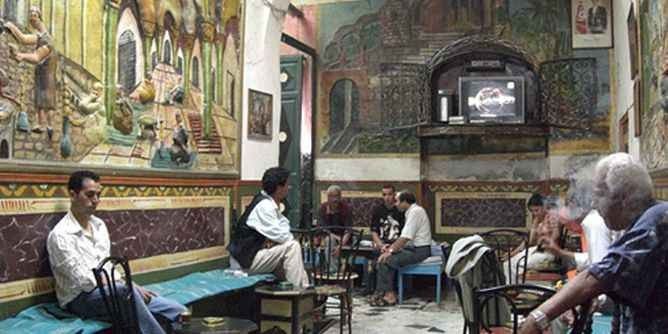 “Al-Shawashin Café” .. It is one of the oldest cafes in Tunis, and one of the most vibrant ones. In the past, it was preferable to sit in the upper class to listen to authentic Tunisian music. Sufi chants were also attended by the sheikhs, especially during the nights of Ramadan, and until now these sessions have been held. In the month of Ramadan, if you were in the Tunisian capital at that time, do not miss to go to it, because you will spend the most beautiful nights of Ramadan that you will not forget, and cultural seminars will also be held in the café related to the authentic Tunisian heritage to revive it. 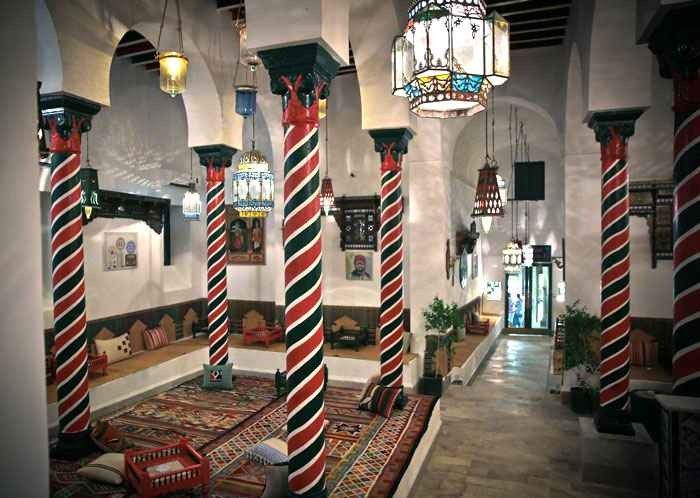 “Al-Murabit Cafe” .. From cafes in Tunis, and there is Al-Murabit Café in the Turk market, which is one of the most famous Tunisian markets. There are also near the Zaytouna Mosque, the most important and most famous tourist attraction in Tunis, and there is also near it the cloth market and the Attarin market, so you cannot miss it. And spend beautiful times in it, the café is characterized by its original Tunisian mattress, as the café is furnished with mats made of chatters and its center is “yellow” and it is a place dedicated to the bands. The cafe is of great importance to Dr. To the Turks, you should go to him for a drink and also listen to one of the bands that offer beautiful art. 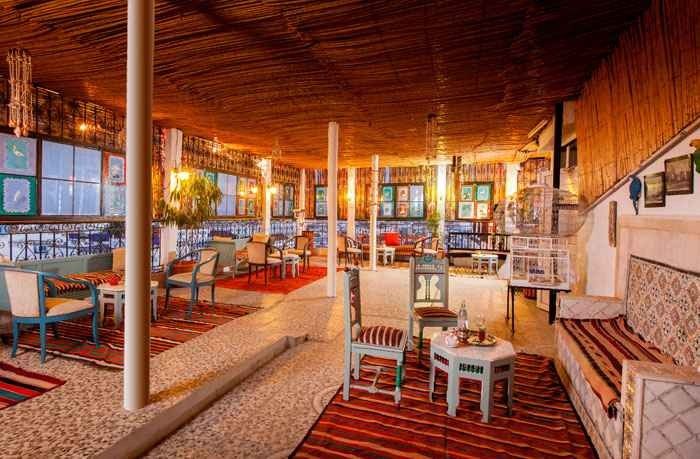 “Saraya Palace” .. It is considered a café and restaurant at the same time and it is distinguished by serving a group of delicious Tunisian cuisine, especially traditional meals, along with different types of spices in addition to the most beautiful Tunisian drinks. We advise you to buy souvenirs from the shops and halls located next to it. In Tunis, it is distinguished by its beautiful architecture.

One of the most beautiful cafes in Tunis 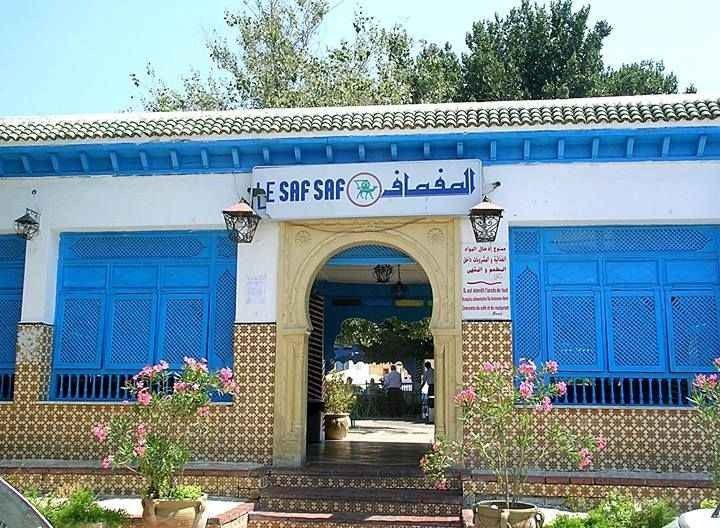 “Willow Café” .. Dear tourist, Willow Café is one of the best cafes in the city, dating back more than 100 years and there is the northern suburb of the capital, it is considered one of the most beautiful cafes and is characterized by a wonderful natural atmosphere that attracts the admiration of everyone who visits it like the existing natural water eye Inside it and the water is extracted by a waterwalk and managed by the camel, if you go to the cafe in the spring and summer you will enjoy the fruitful trees and listen to the beautiful Tunisian music, but in the winter you have to sit in the interior part, it is closed and the cafe is also distinguished by its three levels as there is a theater It offers Moussa performances Yeh special offers distinctive religious chants that offer particularly in the holy month of Ramadan and also offers Layali willow organizes every year.

Tourist places in Tiberias Palestine .. that you must visit

Tbilisi cafes .. Learn about a group of the most famous cafes in Tbilisi …