Dishes vary in the Malaysian cuisine according to each sect. One class has several ways of making it all more delicious than others and there are dishes that are distinguished by each group. To learn about the famous foods in Malaysia, follow us in this article.

Malaysian cuisine uses meat of all kinds, whether it is poultry, beef, lamb and goat meat, and non-Muslims in Malaysia use pork, which is sold in places designated for it, as seafood is included in many Malaysian dishes, most notably snails, shrimps, sea squid, octopus and fresh fish of all kinds. My master is on rice of all kinds, then pasta, noodles and bread, especially western bread, for breakfast, as the Malaysian cuisine derives its meals from the Indian and Chinese cuisine, and the demand for vegetables and fruits that increases in price increases due to Low yield.

Malaysian sati is the most famous Malaysian cuisine, and is adhered to by large and indigenous families in Malaysia, which is beef or chicken meat roasted over the fire and added to them Malaysian spices derived from the tropical environment, which gives them a unique and delicious taste. The meat used in sati is prepared by putting it in the seasoning before a period of grilling, and it is served with it to eat vegetables, rice, and peanut butter, and we advise you not to leave Malaysia before it melts. 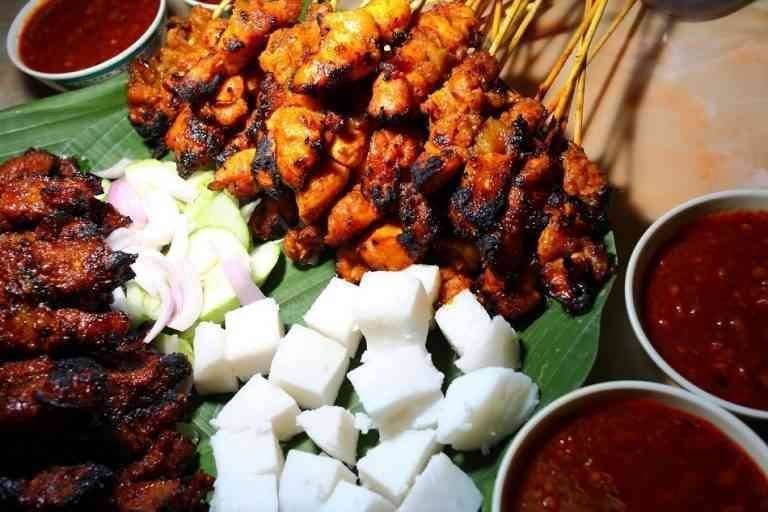 Sati – the most popular cuisine in Malaysia

Sang Har noodles are one of the unique and distinctive dishes in Malaysia, and the most famous Malaysian seafood is fresh shrimps mixed with pasta and eggs, and it is considered one of the best meals in Malaysia because it serves fresh as it comes to you directly from the sea.

The Popper Lambuk dish consists of a mixture of meat, shrimp, rice, natural herbs and potato pieces, and is one of the light dishes spread during the holy month of Ramadan in Malaysia, as it is distributed to the worshipers in bags at the time of the Maghrib ears for Iftar. The companies sponsor festivals preparing the Popur Lamboc dish as one of the types of propaganda in Crowded areas, especially in the Malaysian capital, Kuala Lumpur.

The Nazi Kandar dish is one of the most popular dishes in Malaysia, especially the North. It is a steamed rice, and delicious curry is added to it and chicken and meat are served with it after they are also steamed.

Popia is a famous Malaysian food and it is a type of appetizer and it consists of spring roll stuffed with eggs and beans radish and decorated with sweet sauce when applying.

It is a rice pasta cooked with fish broth and mackerel pieces, add shrimp sauce, onion, cucumber, red pepper, ginger and pineapple, and decorate the dish with mint leaves. 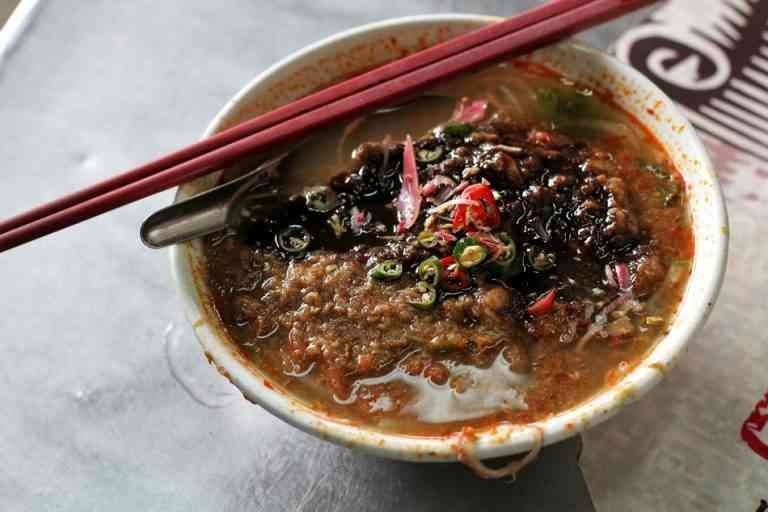 Bisang Grange consists of crunchy bread stuffed with fried banana fingers, a snack favored by the locals so don’t forget to taste it.

Hawken Me is the main dish in the Malaysian capital, Kuala Lumpur, and it consists of thick yellow noodles cooked over low heat in soy sauce with squids, lettuce, cabbage and fish cake. It is known that Hawke Me is served at any time of the day. 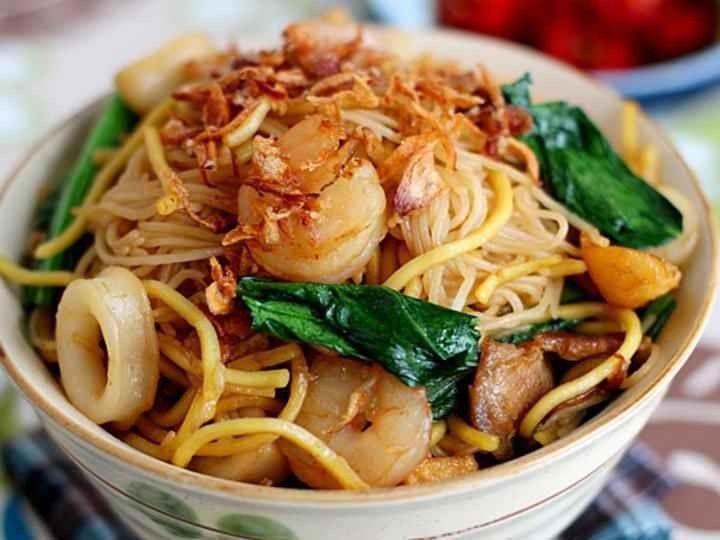 Many coastal Malaysian states, especially the East Coast, are famous for the Kerobok Liqueur dish. It consists of fried fish sausages served with hot sauce and preferably eat crunchy, and is the simplest Malaysian food.

The Nasi Babrik platter has its origins in southern Thailand and is made up of rice alongside chicken. Ican Pakar, Ican Pakar dish is charcoal grilled fish and served with hot sauce.

The Al Nassi Limak dish is an authentic Malaysian dish made of brown rice cooked with the famous coconut milk sauce or cream and served with eggs and the famous sambal dough in red pepper or with anchovy along with toasted Sudanese cucumber.

It is considered one of the dishes similar to the Nasi Limak dish, but Kelantan State is characterized by its cooking, and it consists of coconut milk and brown rice and they are mixed with curry fish and pickles and boiled eggs. 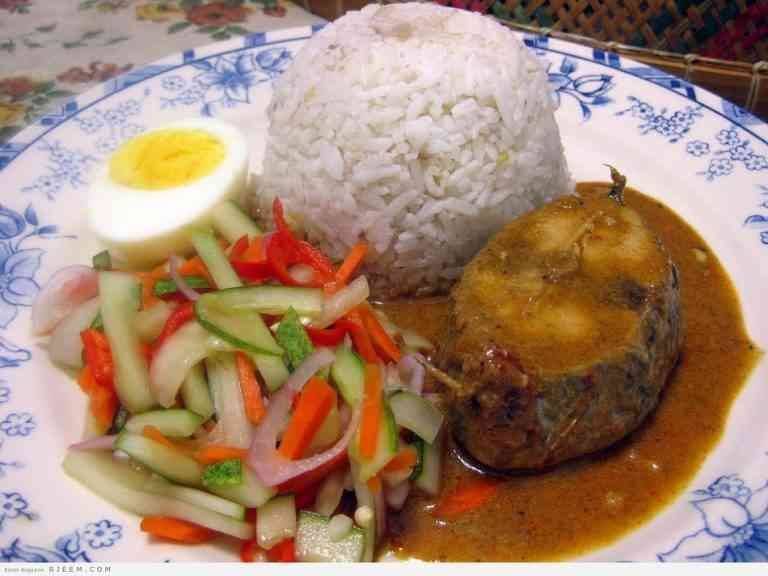 The rotary backar dish, also called iron; is one of the most famous light Malaysian dishes, as it is served as breakfast or during the middle of the day, along with tea with milk, barley, or hot chocolate, which is toast baked with butter.

Kelantan residents dye the rice in blue, resulting in a Nasi Kerabu dish.

One of the fried spinach is the Kangkung Pelakan dish, served with hot pepper and shrimp paste.

Pancake or Abam Balik is one of the most famous bakery in Malaysia and it consists of crisp and thin dough stuffed with coconut, sugar and peanuts.

Indian food in Malaysia is similar to the food found in its original homeland and does not have many differences. Among the most prominent Indian dishes spread in Malaysia; the dessert consisting of rice, lentils and rice with banana leaves, and the most popular type of pie made from rice and black lentils, and the famous biryani. Hindi in Malaysia, we find Bhutto Mayam, which is made from coconut and rice noodles, and we find in Malaysia the famous pizza bread, as Indian curry is included in many Malaysian meals.

Banana leaf dish is one of the traditional dishes in Malaysia and taken from the Indian cuisine, as it is necessary to serve white rice, vegetables, meat or fish on banana tree paper, and to them a papadam crunch is added to them. Malaysians eat the dish with their hands without the use of tableware, and sometimes they do not use meat Or fish since the dish is originally vegetarian. 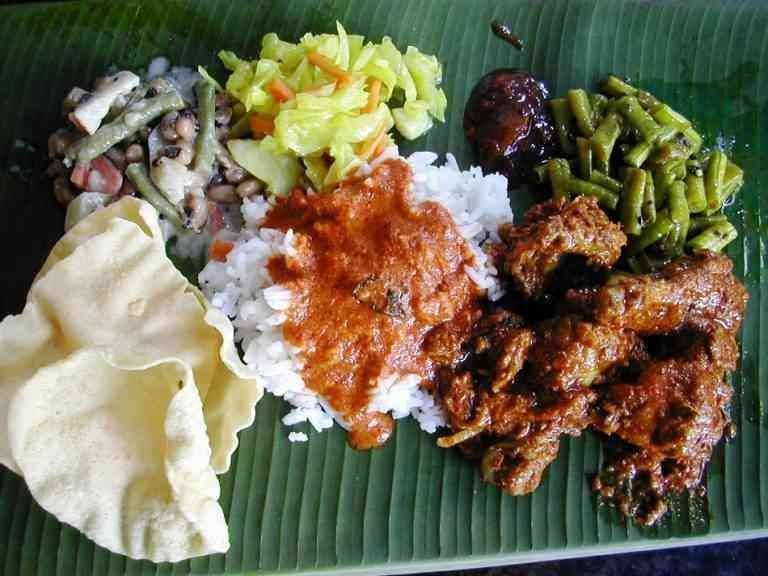 Rojak Booh is considered a cocktail of local Malaysian fruits, vegetables and plants such as bean sprouts and jasmine Eugenia, and it is added to the cocktail crushed pistachios and decorated with shrimp sauce, and eaten with bamboo sticks made for eating. This dish is similar to the one found in its original habitat except that it depends on the local ingredients in its manufacture.