Things you should know before traveling to Africa

For decades, these parks have received millions of visitors every year, the film and television industry has produced hundreds of films and documentaries on wildlife in Africa, which were often filmed inside parks and reserves in South Africa, all of the above was well done to promote South Africa where you can do Touring in a comfortable SUV in the midst of abundant wild and exotic life, to be able to watch predators safely while eating their food in their prey, to observe large cats in tall grass or to follow the migration of herbivores.

South Africa has long been the most popular fishing destination in Africa especially as a safari destination for fishing for the first time, visiting more than 6000 international fishermen annually to play the game of plains and big fishing in more than 9000 registered farms in South Africa, the fishing area ranges from a few thousand to more than 250,000 acres Where fishermen can discover a country and its wildlife that are among the most beautiful and richest things that Africa has to offer, safaris are available on private animal farms and within the fishing areas subject to control in some of the natural reserves for local fishing, and most of the operations in South Africa are done on a closed private land. 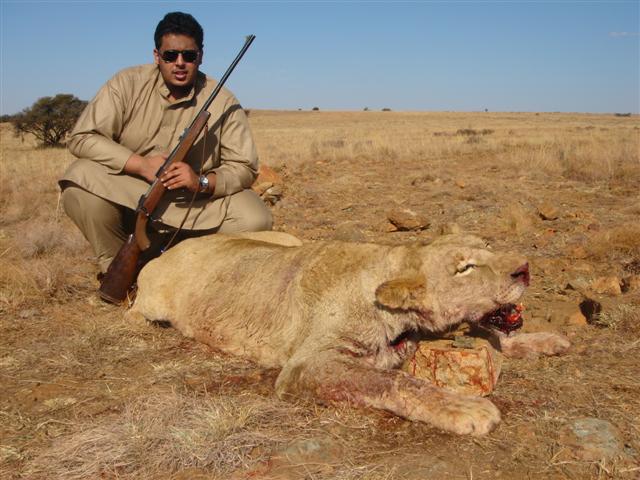 While hunting in South Africa, one can take the Big Five: lion, cheetah, buffalo, elephant and rhinoceros, the top five species are spread all over South Africa where most of them are harvested in a few provinces, about 60% of all leopards are taken in a county Limpopo with another 25% being hunted in the northwestern province, about 65% of all buffalo is harvested in Gauteng province, and an additional 20% is taken in the provinces of KwaZulu Natal and Free State combined, and the lion is taken by an overwhelming majority, 70%, in the northwestern province With 20% taken in Limpopo Province.

While more than half of all elephants are harvested in Limpopo and an additional 30% are taken in the Northwestern Province, approximately 70% of white rhino are hunted in KwaZulu-Natal and Northwest Territories, where the two provinces enjoy equal productivity, and Mpumalanga Province produces 90% of the mares River covered in South Africa if you are interested in fishing for the Big Six.

Johannesburg and the surrounding highlands have a pleasant, dry and sunny climate all year round. Between October and April, the region can experience heavy thunderstorms in the afternoon with heavy rain that disappears as soon as they arrive, and the winter days are a little cooler than the average summer temperatures. But it can get cold on winter nights, Cape Town, on the Cape Peninsula, has a Mediterranean climate with dry summers and wet winters.

Read:Theme parks in Cape Town: the 6 best theme parks for families and individuals

In the winter between May and August, a series of cold fronts crossing the peninsula from the Atlantic Ocean are affected. Winter is characterized by heavy rain, especially on mountain slopes, strong winds in the northwest and low temperatures. In summer, the weather in Cape Town is warm and dry, But the ideal sunny weather is often punctuated by strong southeasterly winds, along the coast of South Cape, rain can fall during both seasons.

South African fishing season and when fishing is permitted

Fishing Season – January 1 to December 31 (all year round)
Hunting is permitted throughout the year, but some species may be restricted in some provinces during certain times of the year, also due to the summer heat and rain, most fishing is done between March and October, and June, July and August are the most popular fishing safaris.
There are no regulations governing the number of days for a fishing safari trip, if a minimum number of days is required, it will be appointed by the hunting commander.
Fishing from a vehicle is permitted in some governorates

Species that can be caught in South Africa

South Africa offers the largest variety of species available for hunting from any other country in Africa, with more than 70 species for hunting, including many exotic non-native species in South Africa or Africa, hunters can also hunt the Big Five consisting of elephant, and rhino The most common type of fishing in South Africa is Lion, Leopard, Buffalo, Buffalo, where the tops are Impala, Warthog, Kudu, Spring Book, Facebook, Jimbo and Blue Wild Best.

Here is my brother, the tourist, the most prominent tourist attractions in Saotome

Learn about the best parks in Zimbabwe

Where is the city of Thuwal located?

The best time to travel to South Africa