Geneva popular market Where to find the cheapest prices and the best goods in Switzerland?

Not only are the goods on the Geneva market popular for farmers to offer fresh vegetables and fruits, but there are also many other exhibits such as bread, dairy products, meat and animal products of various kinds in addition to many other things.

The village Plainpalais is the largest and most important of the popular Geneva markets and it is held three times a week. The market can be visited on Sunday, Tuesday and Thursday in the Plaine de Plainpalais region from nine in the morning until three and sometimes five in the evening on Sundays and before that on Tuesday. As for Saturday, it will be held in The same market place is another market for selling used items.

The Eaux-Vives Village Marketplace is held in the Boulevard Helvétique ~ 30, where cars and vehicles are completely prohibited throughout the sale and purchase period. The Eaux-Vives Village Market is characterized by the presence of a wide variety of local goods and the production of village farms at the lowest prices. Naturally produced nutritional products without hormonal additives or toxic substances. The market is held only twice a week during Wednesday and Saturday from morning until two in the afternoon. 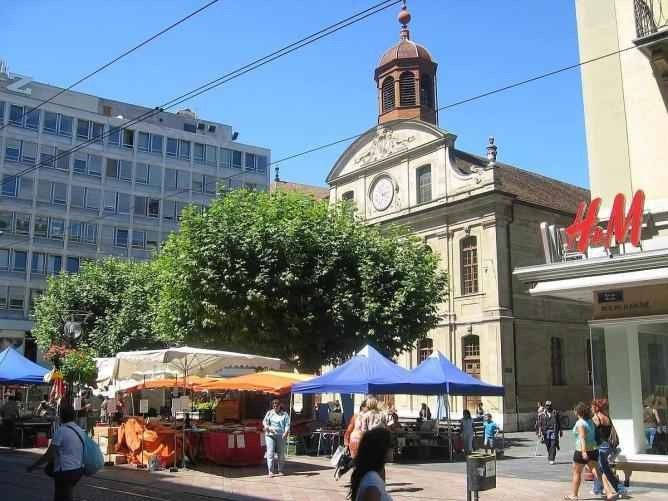 From the small popular Geneva market, in which vegetables, fruits, roses, etc. are sold, the Place de la Fusterie is distinguished from the others by the fact that it is held almost in the heart of the city at the end of the famous shopping street in the capital known as Rue du Marché. The market is dedicated on Saturday and Wednesday to sell food items such as Vegetables, fruits, food, local cheeses and dairy products. On Thursday, it turns into a place for selling handicrafts and women’s home-made products such as candles, dolls, clothes, etc. Read also: The most popular tourist place in Geneva The Place de la Fusterie market on Tuesday and Friday turns into a big yard for fans C With books and publications in general, if you happen to be in Geneva in December, you will be able to attend the shopping festival that takes place until Christmas and offer free gifts every day.

It is one of the local markets in Geneva where it offers many items such as food and drinks. It is located in the suburb of Pâquis, near the lake shores and the railway station, where some of the best wonderful restaurants are spread. 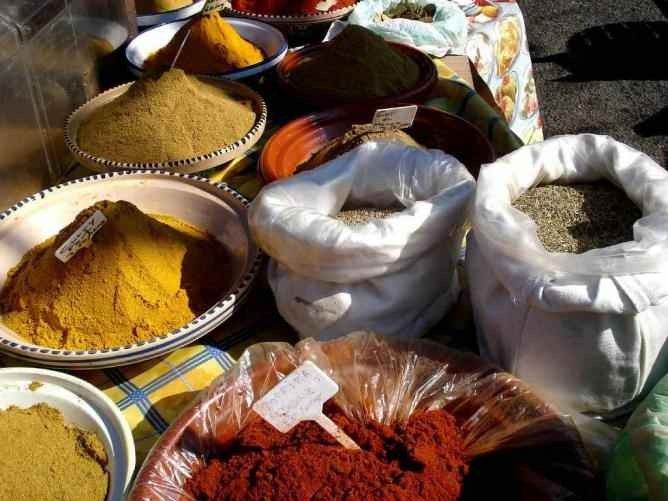 The (Carouge) market is held weekly on Saturday and Wednesday from morning to noon. There are many cheap goods in the “Krug” market such as fresh honey, fruits, various different types of handmade cheese in addition to meat, bread and vegetables.

The Puces de Nyon market differs from the rest of the popular Geneva market in that it is held once a month, on the last Sunday of every month as the merchandise display tables extend to more than a kilometer in the charming Lake Geneva region. There are different price segments in the market due to the presence of a large number of sellers and goods But in general, they are very cheap prices compared to the rest of the market. The Puces de Nyon market mainly offers used goods such as toys, clothes, accessories, etc. But this does not prevent the presence of new goods from well-known brands, especially in the areas of home furniture and clothing. A popular outing for many tourists and residents The locals, especially with places to sell hot food and drinks. Read also: The most famous Arab halal restaurant in Geneva 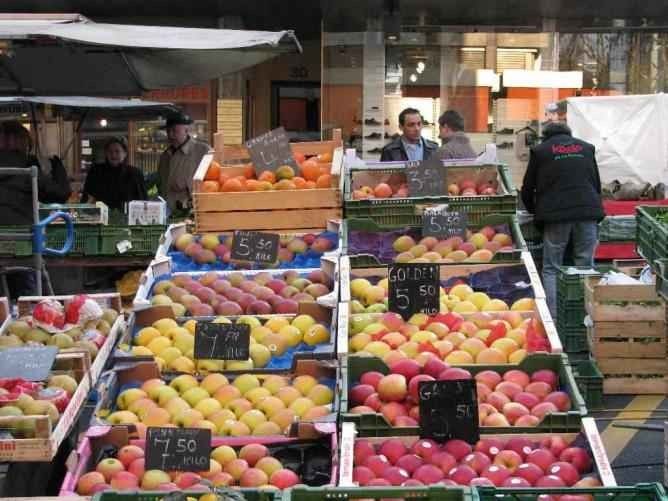 One of Geneva’s largest popular markets is the sale of healthy food and non-GM crops, but it also offers local products to farmers such as honey and dairy products.

It is located near the Boulevard Helvétique, but it lasts six days a week and sells different types of food. Also read: The outlet is in Zurich and the cheapest prices

Popular markets in Geneva on Wednesday

Onex Cité-Nouvelle market for all merchandise from eight in the morning until one in the afternoon in the suburb of 27 Avenue des Grandes-Communes.

Popular markets in Geneva on Thursday

The Geneva natural products market takes place between the (De-Gallatin and the Chemin François-Furet) road, in which different types of food, such as meat, vegetables and fruits, are sold.

Popular markets in Geneva on Friday

Chênes-Bougeries Market for all products is held from eight in the morning until two in the afternoon.

Popular markets in Geneva on Saturday

Onex Cité-Nouvelle market for all products from eight in the morning until one in the afternoon and is held on the (des Grandes-Communes).

Your travel guide to Iran (Part 2)

Geneva cheap markets How to escape the high cost of shopping in Switzerland?