Here is the most beautiful and charming natural places in Iceland

The slopes of Latrabjarg 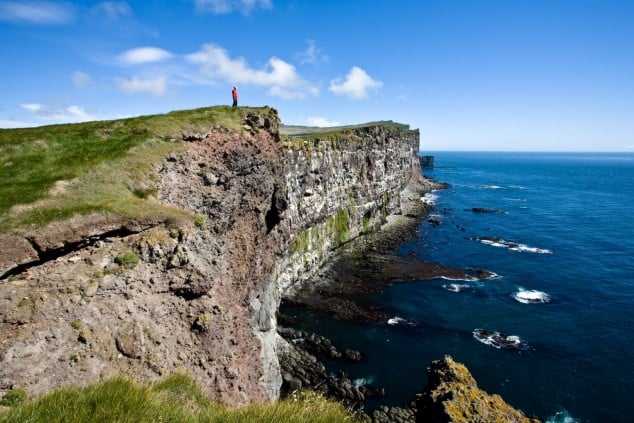 Iceland’s exotic Westfjords are home to the huge cliffs of Latrabjarg, the largest cliff where birds gather in the world. The diversity and vast number of birds that can be seen there at one time are amazing and represents a wonderful example of nature in Iceland.
The slope is called the majestic slope and is located in the harshest point in Aruba and hosts the largest number of seabirds in Iceland, and tourists come from all over the world to see birds and take pictures.
The most common species found there are gannets, guillemots, razorbills, white-tailed eagles, red-throated loons, arcic, redshanks sea hooks, snipes, auks, murres, kittiwakes, fulmars, buntings and plovers plands. 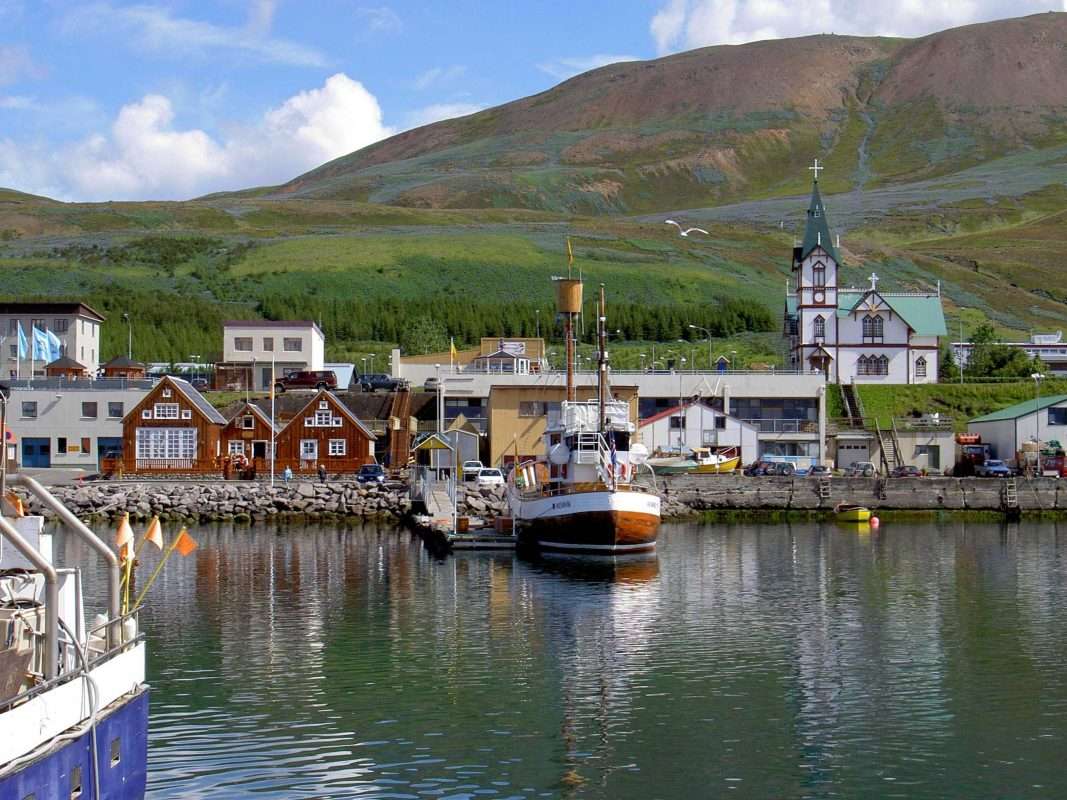 Lake Myvatn is a beautiful region in northern Iceland, famous for its spectacular volcanic activity and fertile ground for birds where there are more types of ducks than anywhere else in Europe.
The most common types of birds are legendary ducks, Eurasian species, sparrow ducks, baroque gold, scraps, halal ducks, flameles, and golden birds. We may also see birds of prey such as an owl.
Do not miss the opportunity to visit the Sigurgeir Bird Museum on the Neslandatangi Peninsula near the lake, and within an hour’s drive you will find on the north shore a large number of purple sandpross birds reproduce. 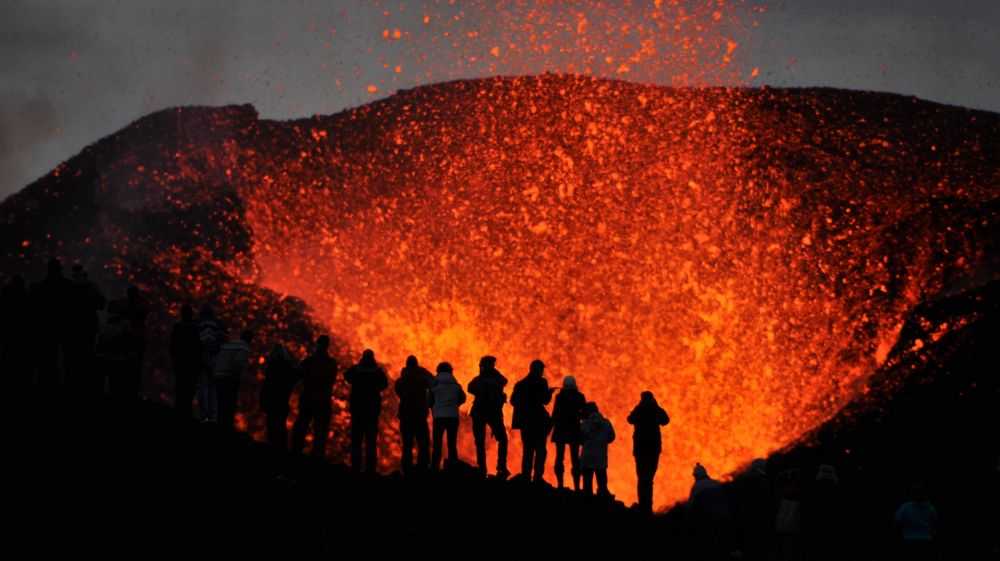 In Iceland, nature is known for volcanoes, Iceland is the largest volcanic island in the world, and the depth of volcanoes underground reaches more than two layers.
Volcanoes there consist of a combination of two ground plates together the North American plate and Eurasian plates, and they met together causing deflection of the plates and the formation of gaps that are filled with lava and magma.
When the earth’s plates move towards each other, the gaps become smaller and magma explodes to the surface of the earth, causing a volcanic eruption in a very complex process. On average there is a volcanic eruption every 5 years over Iceland.
The most famous volcanoes are the Eyjafjallajökull volcano. There are also many other volcanoes such as Askja Katla, Surtsey, Heimaey, Krafla, Grimsvötn, Hekla and Bardarbunga.
Bardabunga volcanoes erupted in 2014 and after a few weeks settled and subsided again, many volcanic tours are organized that can lead you to reach the lava hole, but you should only visit it with an expert guide. 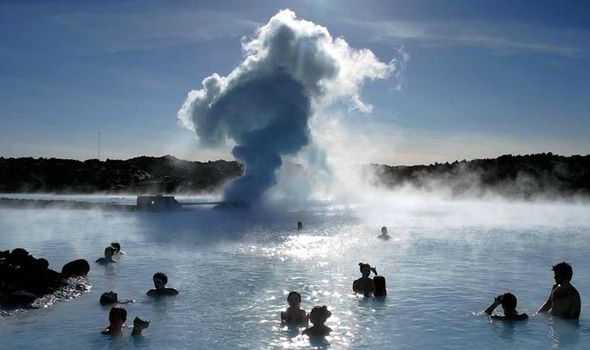 Among the most famous nature scenes in Iceland are geysers and hot springs. The springs contain hot sparkling water that fountains fountains in the air at regular or irregular intervals sometimes. This is called “puffing” by eruptions and can occur in any time period ranging from a few minutes to several months, When it erupts, the fountain can reach hundreds of meters.
For anyone who wants to visit the heaters and hot springs in Iceland to visit the Hawkadallur valley and called it the “golden circle”, there you will find many wonderful thermal springs, when you approach the spring you will notice the smell of sulfur that comes out of it, which can be very severe depending on the weather.
Hot springs are surrounded by a rope to set security limits and ensure the safety of visitors. If you ignore these ropes and come close to the springs, your feet will burn quickly because the surrounding ground is extremely hot. 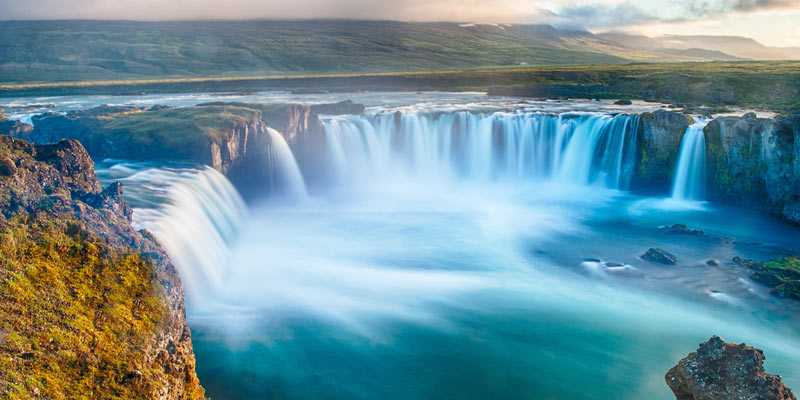 Iceland’s nature is characterized by its charming waterfalls, which are formed by the melting of glaciers

Gullfoss Waterfall: It is the most popular and the most attractive, the waterfall consists of two levels which creates a beautiful flow of water, and is considered the most famous tourist site in Iceland, and many films have been filmed there
Dettifoss Waterfall: In northeastern Iceland it is the largest waterfall in Iceland, and the movie “Promothehe” was filmed there as it appeared in some scenes.
Selfoss Waterfall: This waterfall is located above Detifoss where the water runs at an altitude of 10 meters, then after one kilometer the water appears over Dettifoss which is 45 meters high and then the water flows at an altitude of 27 meters in Havrajelfsfoss through the Jokulsargur National Park and finally through the Osprey Valley.
Seljalandsfoss Waterfall: This waterfall has a very unique feature where you can pass through it and discover beyond the waterfall. 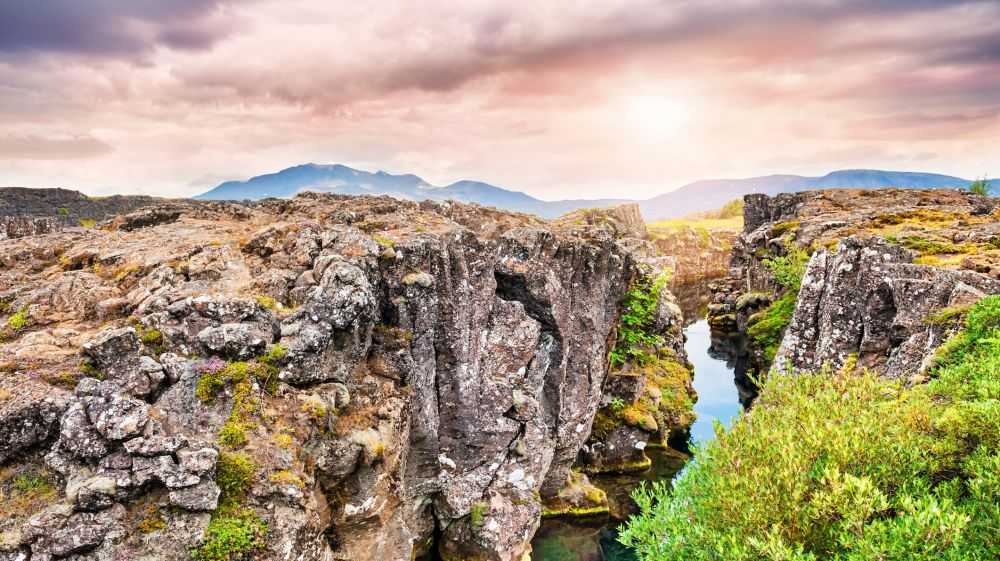 It is a favorite stop for travelers along the Golden Circle Road, it has been a national park in Iceland since 1928, and it has been designated a World Heritage Site by UNESCO in 2004.
When the Viking settlers reached the tenth century, the Montazah site was the place they chose to be the meeting place for the Althing the first parliament in the world.
The place has geological and historical significance represented in the high rock wall of Loughberg (Law Rock), which was engraved on the laws of that land in the past.
Here, the tectonic plates of North America and Eurasia meet and disintegrate at a rate of 2 cm (approximately an inch) per year.
On the western side of the plain you can see the eastern edge of the North American tectonic plate immersed in the Atlantic Ocean, on the eastern side at the Heidargja Strait you will see the western end of the Eurasian plate.
There is much to explore in the park including the 20-meter (66-foot) Oxara Waterfall and the Gorgege Gorge Strait known as Peningagja Money Gorge because it is customary to throw coins and sometimes credit cards in cold water and wish for security.
Thingvellir is also home to Lake Thingvallavatn, an unusual diving site where you can swim intercontinental in clear ice water.