Holy places in Medina .. The beloved of the Messenger of God and the second holiest city in Islam

There are holy places in Medina that are unparalleled and sacred. Medina is the second holiest city
In Islam after Makkah Al-Mukarramah, and that is because it contains the Prophet’s Mosque, peace and blessings be upon him, and it is the place that is
Our honorable Messenger was buried in it. Thousands of visitors from all over the world come to it from all over the world to visit the Prophet’s Mosque and the Sharif.
The honor of being in Thebes, the beloved of the Messenger of God, and they go to the other attractions of Medina, which we will all mention
In some detail in our next article, follow up with us so that “Arab Travelers” will guide you during your next visit to Medina.

The most famous 10 holy places in Medina

The Noble Mosque is the most important 10 holy places in Medina and is considered the second most important holy site in the world
The entire mosque is where people from all over the country come to visit and pray on the pilgrimage and Umrah trips. The mosque was originally built by the Holy Prophet himself next to his house that he settled in after migrating to Medina in the year
622 AH, originally built from palm trees and mud, and had three main gates: the door of mercy from the south and the door of Gabriel from
West and Bab al-Nasa in the east. Now, after the many recent updates and expansion, the mosque has become 100 times larger than the mosque built by the Prophet
May God’s prayers and peace be upon him at the beginning, and it now contains 24 dome and umbrellas affixed to its pillars to cover the entire square, which open at peak hours to protect the Muslims from the sun. In full
Of white marble; the green dome that rises between the sea of ​​white domes is the place under which the tomb of the Prophet Muhammad lies, and Abu Bakr Al-Siddiq and Omar bin Al-Khattab were buried in a neighboring area, and there are specific times daily where the visit to Al-Rawdah opens. 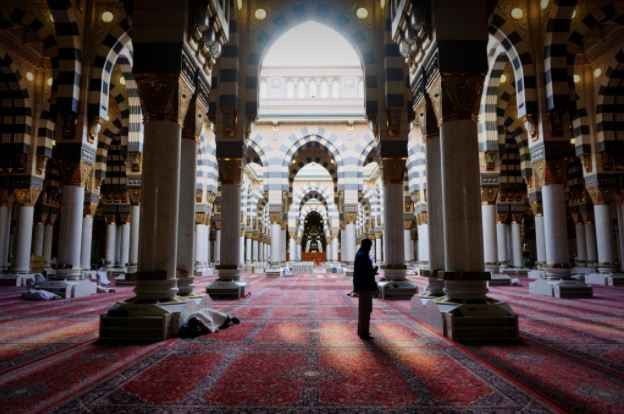 The Prophet’s Mosque Read also: Malls of Medina near the Haram .. The best opportunity to shop without missing prayer times

Quba Mosque is one of the most famous and most visited sites in Medina after the Holy Prophet’s Mosque, due to its sanctity
Until it is the first mosque built in Islam, and the Prophet, may God bless him and grant him peace, laid the foundation stone for the mosque during his stay there. The Quba Mosque is about three kilometers south of the Holy Prophet’s Mosque and it is known that one prayer in the Quba Mosque is equivalent to
Performing Umrah, which indicates its importance, sanctity, and great virtue. Also, the museum is an exceptional masterpiece of architecture and distinctive design, and outside the mosque there is a large market that is shopping
People from him to buy gifts. 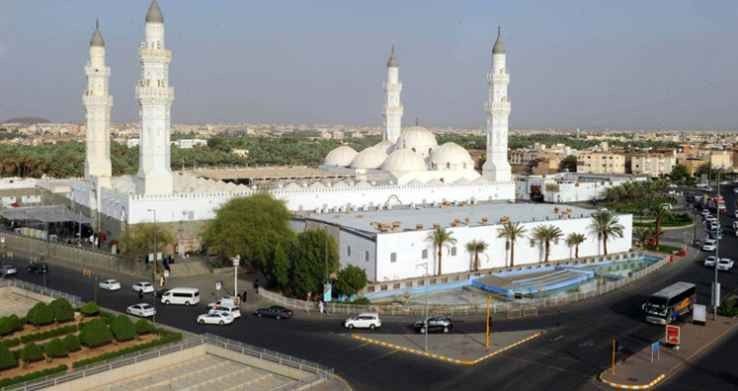 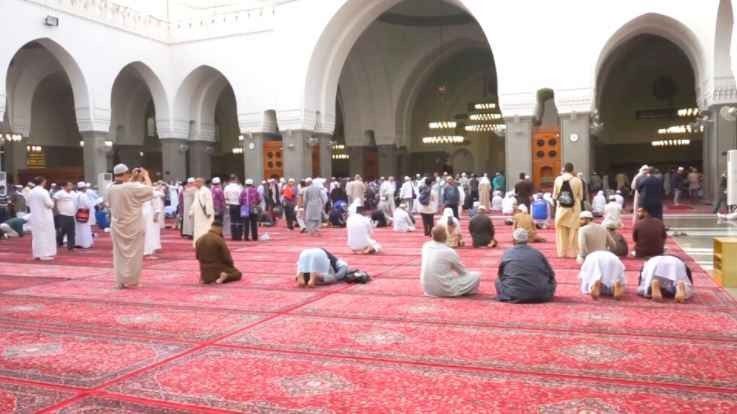 Mount Uhud is one of the holy places in Medina, and the large number of tourists going to visit it; and a messenger said
God, peace and blessings of God be upon him, on the mountain of Uhud is “a mountain that loves us and loves us.” The battle of Uhud took place at the foot of the mountain in the year
The third is from immigration. It is also known as the mountain that was shaken when the noble Messenger stood on it, and therefore it has a special place in the hearts of Muslims.
Where he witnessed great events in the history of Islam; it also contains the cemetery of Uhud’s martyrs, which is one of the most important
The city is visited by Hamza, the Prophet’s uncle, and many martyrs and companions. The cemetery is surrounded by high walls and people can see it through windows found in these walls or walls. 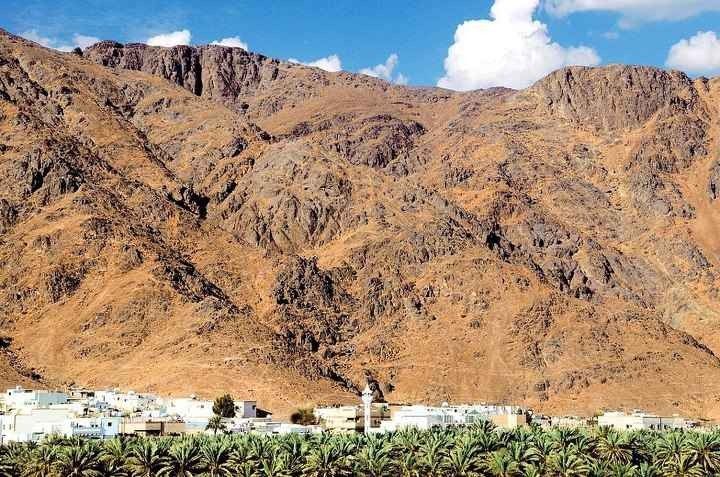 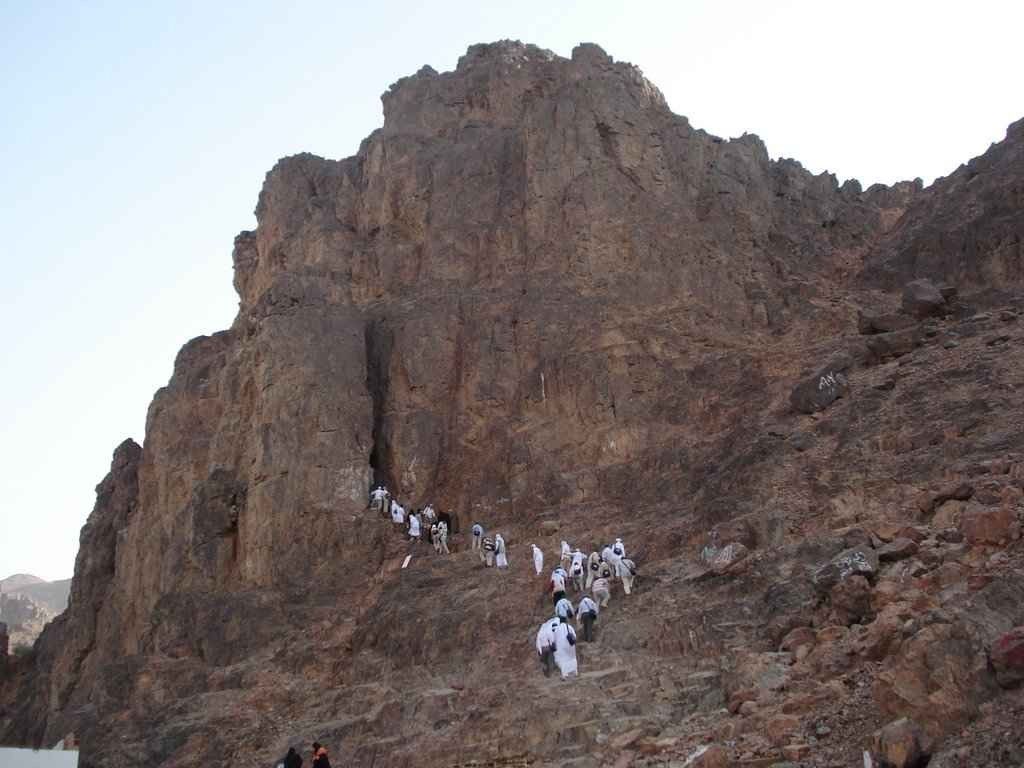 Mount Uhud Read also: The museums in Medina .. A tour between the museums to get to know the history of Thebes and its ancient heritage

The Qiblatayn Mosque is one of the ten most beautiful places in the holy city of Medina, it is very beautiful from the inside and outside
It is characterized by a unique design as it consists of two completely identical halves; and it has a beautiful prayer hall designed with large windows
It is decorated and colored, so the light passes through it, gaining its colors in an amazing scene.
To the Sacred Mosque; the mosque still maintains the place of the qibla facing the Al-Aqsa Mosque to this day; and from here
His name came (with two kisses). 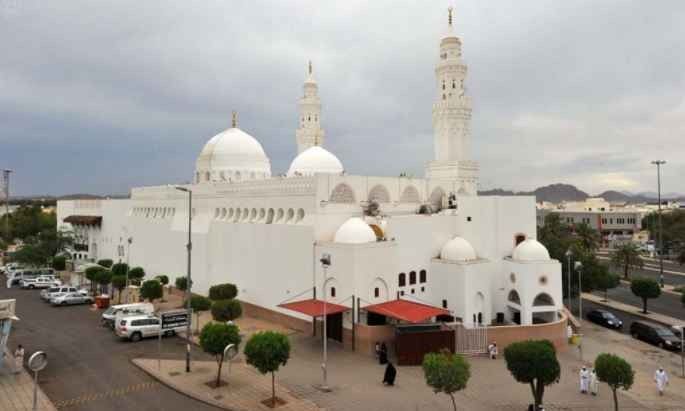 Friday Mosque is located very close to the Medina and the Holy Prophet, may God bless him and grant him peace, has come to him after
He moved from Quba to Medina, and it was at the time of the Messenger’s arrival and passing through this site at the time of Friday prayers, so they set up Friday prayers
In this place, and then the mosque was built in the same spot in which the Friday prayer was held at the time, and that was also the reason for its name, which is
It is located south of the Prophet’s Mosque. 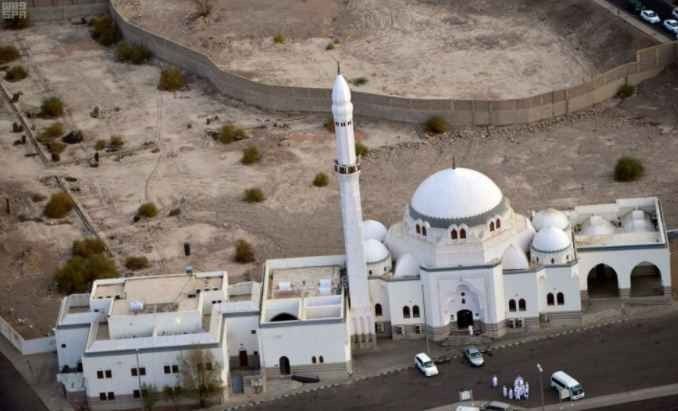 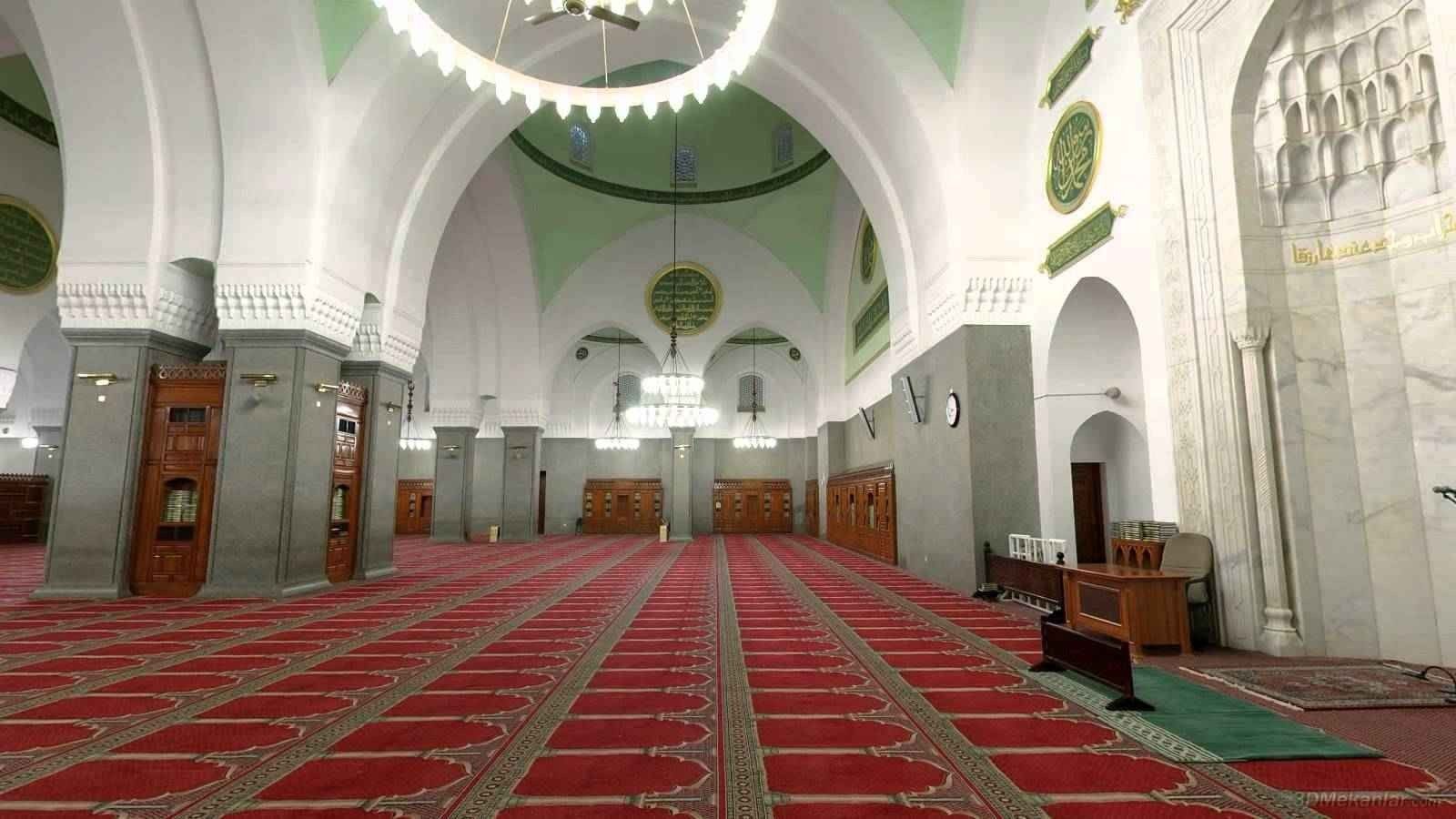 Dhul Halifa Mosque was built twelve kilometers outside the city of Medina and it is one of the primary times of Ihram
It was determined by the Messenger for pilgrims and pilgrims, who is known as Abyaar Ali. All buses and trips to Mecca
Stop at Abyar Ali or the Dhul-Alliifa Mosque for Ihram before heading to spend the rituals of Hajj or Umrah. 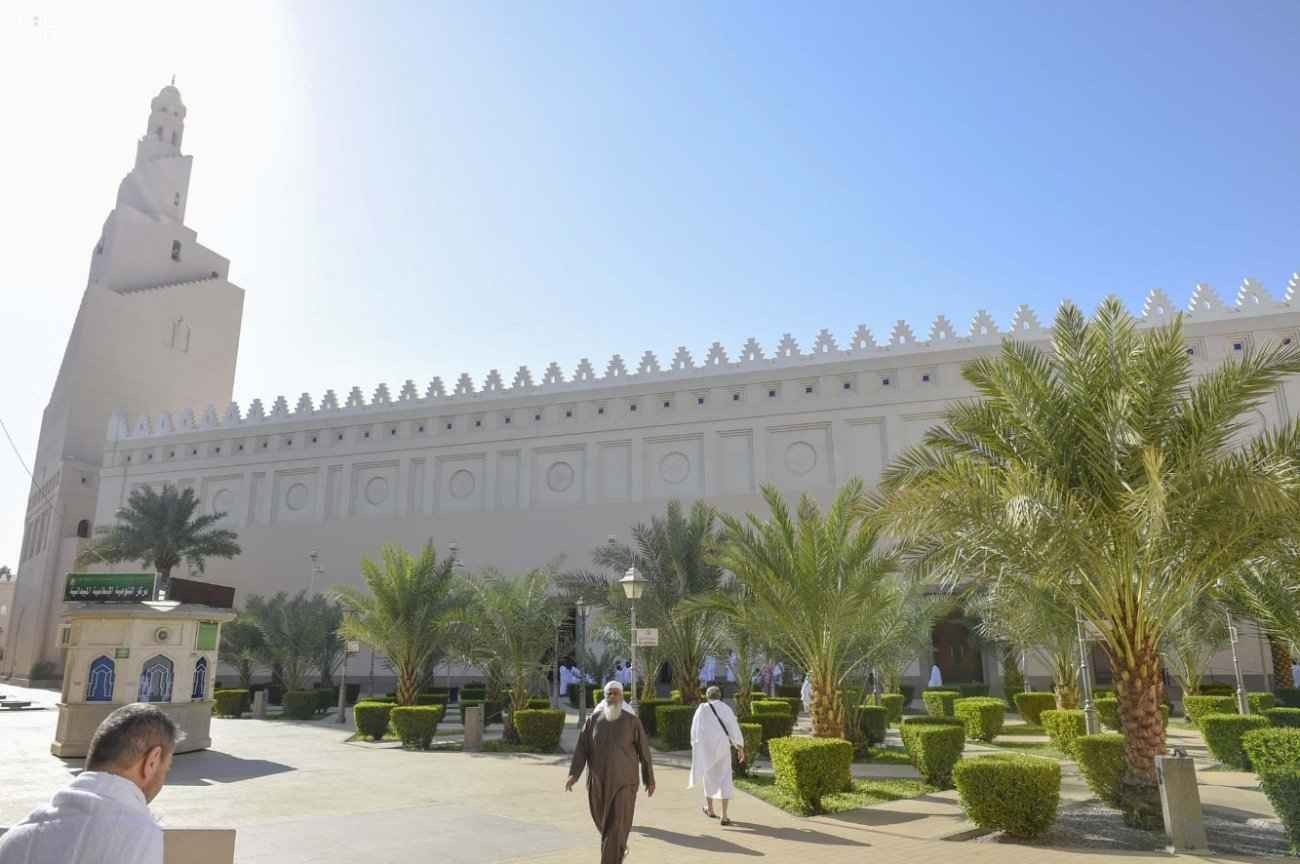 Ze Al Halefah Mosque, parks in Medina .. the most beautiful parks and picturesque gardens in the arms of the Prophet’s city

Al-Ghamamah Mosque is located very close to the south of the Holy Prophet’s Mosque, which is the mosque where the Prophet prayed
The Holy, may God bless him and grant him peace, prayers for rain, in order to rain. He is also known as the Eid Mosque, because the Messenger, may God bless him and grant him peace, and his companions used to pray Eid prayers with him and people would go.
To visit him because he is one of several holy places in Medina from among and due to his proximity to the Prophet’s Mosque, but
The most sought after are the Iranians. 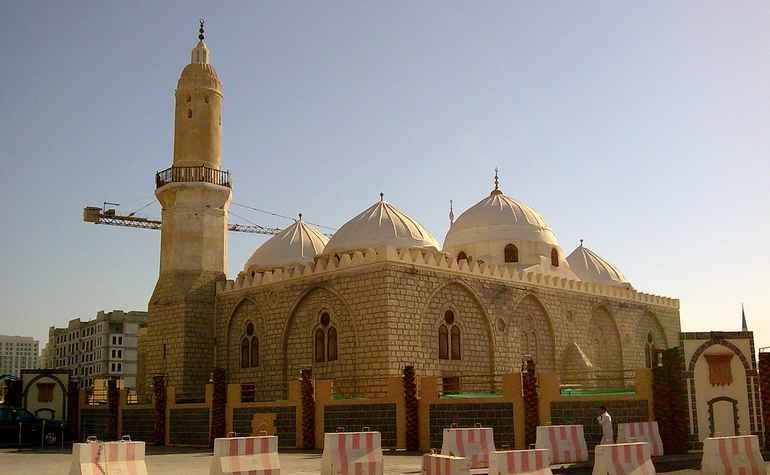 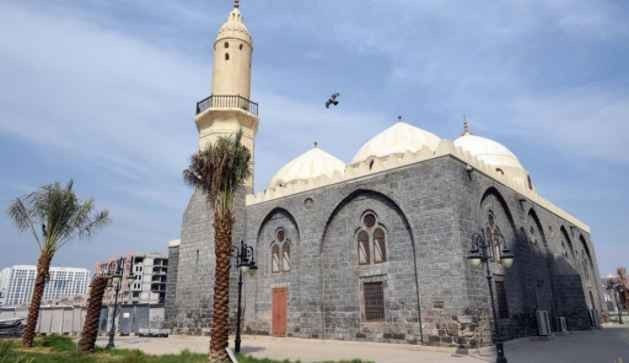