Konya is one of the largest tourism cities in Turkey and the capital of a province bearing the same name. It is one of the oldest cities known for its architectural style dating back to the Seljuk era and among the buildings that still retain this style is the Aladdin Mosque with exquisite wood engravings and the Mevlana Museum.
Discover the dazzling nature, historical monuments and attractions when you travel to Konya, but before you plan to travel you should read the following lines so that your guide is to find out where Konya is located on the map? How far is Konya from Istanbul and from the most important cities of Turkey and the means of transportation available between each of them, all this and more in the next report. 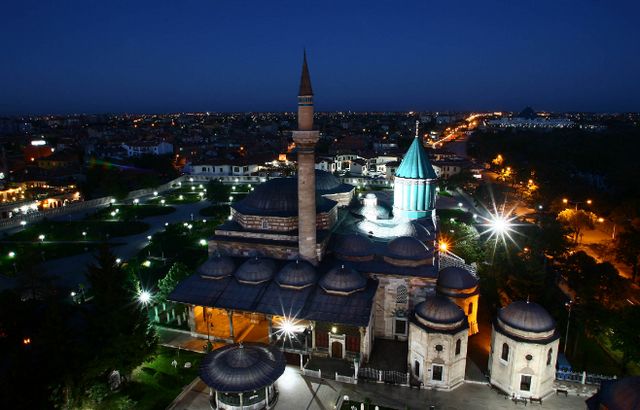 Where is Konya located?

Before knowing how far away Konya is from Istanbul, let us know a little bit more about the location of Konya.
Konya is located in the center of south Anatolia, bordered by Ankara to the north, and to the south by the city of Karaman, while from the west it is bordered by Aq Saray, from the eastern side of Isparta, and to the northwest by Eski Shahr and Mersin to the south.
Below is a map showing where exactly Konya is located in Turkey.

How far is Konya from Istanbul

One of the most common questions among Konya’s visitors is how far Konya is from Istanbul. Here we answer this question.
The distance from Konya and Istanbul is approximately 635 km, which is approximately 7 hours and 40 minutes, by driving. It is possible to reach faster by flying from Konya Airport and the distance is covered in only an hour and 10 minutes, attach a map to see and learn more.

Where is the city of Konya located in Antalya

The city of Konya is about 304 km from Antalya, according to Google estimates, which equals 4 hours and 5 minutes by car, to find the fastest route you can see the attached map below.

Where is Konya located from Izmir?

The distance between the two cities in kilometers is about 560 km, which is approximately 6 hours 48 minutes. Travel by car via your fastest route shown on the map. You can reach faster via flights via Turkish Airlines Pegasus.

Konya is far from Ankara

The distance from Konya to Ankara is estimated at 263 km, which is approximately 2 hours and 53 minutes. Travel using the fastest route is shown in the map attached below.

Where is Konya located on Bursa?

The distance from Konya to Bursa is measured at about 486 km, which is approximately 5 hours and 57 minutes by car, and it is possible to reach faster flights by flying from Konya Airport to reach within an hour and ten minutes only.

Where is Konya located in Fethiye?

The distance from the city of Konya to Fethiye is calculated at about 475 km, which equates to approximately 6 hours and 40 minutes. Travel by car. You can cut your trip in the least time by flight to reach within 4 hours and 5 minutes. You can use the attached map to know the exact route.

How far is Konya from Adana

According to Google’s estimates, the distance from Konya to Adana amounted to about 360 km, which is approximately 6 hours and 39 minutes traveling by car, and for the fastest route, you can see the attached map below.

Where is Konya located on Trabzon?

The distance from Konya to Trabzon is about 916 km, which is approximately 10 hours and 53 minutes by driving, and you can travel the distance in a maximum time of 3 hours and 40 minutes by flying from Trabzon Airport and to know the fastest route you can see the attached map.

After we got to know how far away Konya is from Istanbul, let us give a brief introduction to Konya. Where is Konya located
Tourist destinations in Konya vary between parks, rain gardens and historical monuments such as the Karatai Museum, the Japanese Garden in Konya, Maram Orchards, Azizia Mosque, and other places and activities that you can learn about by visiting the following link .. Read more

6 of the best Turkish opium hotels recommended by 2020