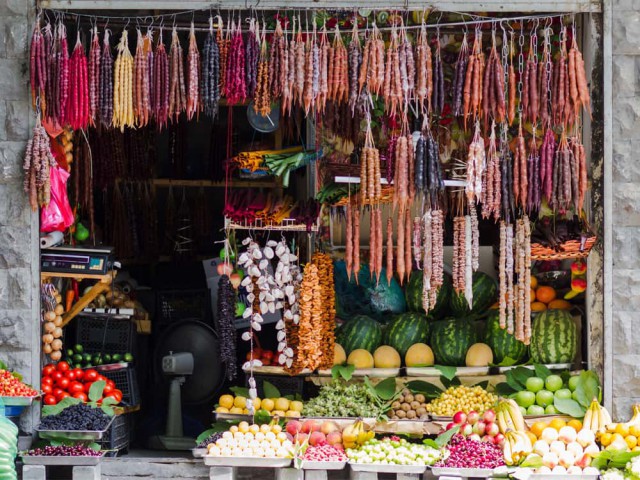 One unknown information about Georgia is that it has its own writing system, used in the three Georgian languages: Nuskhori, Asumtavrole, Mahdalhi. This writing system originally consisted of 38 characters, but today it is composed of 33 letters. One of these attributes is the Georgian alphabet, which was overshadowed by the influence of Greek and Persian letters but was formulated towards its distinctive Georgian form. The language shows the Greek influence in the arrangement of letters, while the Persian influence can be seen in writing letters.

2- The World’s Deepest Cave: The Krubera Cave in Georgia

If you are so enthusiastic about the idea of ​​going deep into a steep vertical cave, the Kropera Cave is the place to look. Hidden in the mountainous region, Krubera Cave is the deepest cave on the planet with a depth of 2.19 km, where it takes approximately 27 days to reach its hall.

3- The sites inscribed on the UNESCO World Heritage List – Mtskheta

One of the most important historical facts about Georgia, along with stunning views, hidden caves and medieval churches, are the sites included in the UNESCO World Heritage List. Where the ancient capital includes Mtskheta, the huge church complex of Bagrati, Gelati and the Svaneti mountain region.

Oshgouli includes a wide range of ancient villages located in the mountainous region of Svante. This region is known as the highest inhabited region in Europe, it is located at an altitude of 2,100 meters above the surface of the earth, and it also has stunning views, delicious meals, indigenous traditions, hospitality, Svaneti and the destination of Europe that you must visit.

5- Georgia, the country with the largest environmental diversity in the world.

With so many diverse climatic regions stretching from the Alps, subtropical and semi-desert mountains, Georgia is known to be one of the most diverse countries in terms of climate in the world. A few wonderful animals, such as bears, tigers, and lions, were also found in the country’s dense forests.

From trekking, climbing, bird watching, horse riding, exploring natural beauty, to discovering the art of wine making, Georgia has everything to make you as a tourist happy. Enjoy skiing at the cheapest ski resorts in Europe, explore the ancient cave cities, learn about some of the world’s finest medieval buildings, or just relax in world-class beach resorts. Georgia has everything for everyone.

Georgian Jews in the Caucasus are one of the oldest societies in the world and they are divided into two parts, Georgian Jews: they date back to 2,600 years, while Ashkenazi Jews came to the country in the 19th century. There are approximately 3,000 Jews living in Georgia today.

8- Georgia is the premier destination for skiing and snowboarding

One of the fun facts about Georgia-Europe is that it is one of the best options for skiing and snowboarding enthusiasts. With snow rising up to 10 meters each year and being home to the 2014 Winter Olympics, this popular spot is considered the best ski destination in the world.

Tourism in the city of Gabes .. in the most beautiful green cities of Tunisia