The most important guide Istanbul tourist attractions with pictures Which is one of the best and most famous tourist period in Turkey, Istanbul is known since ancient times as Constantinople, and it is known that it has the largest tourist cities, and is considered the second largest country in the world in terms of population, with a population of about 13 million people, and today we will start with you, On a trip to see its most important tourist attractions, where historical Istanbul landmarks were added to the list of the UNESCO World Organization in 1985, and the state of Istanbul was chosen as the common capital of European culture for the year 210, come with me to get to know the most important tourist attractions in Istanbul.

The most important tourist attractions in Istanbul with pictures:

The city of Turkey is the most important country for all who wish to tourism, especially Istanbul, and this may be due to the state’s historical value and its names changed from Byzantium to Constantinople to Astana to Islambul until it settled for the current name Istanbul, and Istanbul is the economic, cultural and commercial capital of Turkey, along with It has the most important and famous tourist areas in Turkey, and its area is about 1825 square kilometers, and its population is 14983000 people, and we will start with the most important public monuments in Istanbul, including: 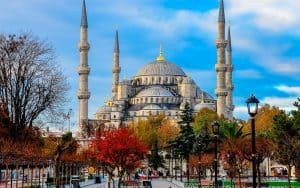 Where Sultan Ahmed, during his assumption of power, built this ancient mosque in 1916, and it is one of the most important tourist attractions in the whole world and not only Istanbul, which the visitor is keen to visit on a continuous basis, due to the very impressive designs owned by the mosque, and its designation is due to the Blue Mosque for its inner lining It is predominantly blue and its entry is free and available 7 days a week. 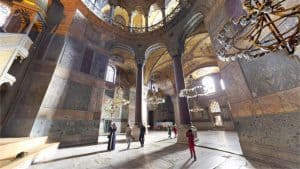 The Hagia Sophia Museum is one of the second tourist attractions in Turkey and Istanbul, it is an ancient museum located in the sanctuaries of the Sultan Ahmed Mosque, and it was built in 359 AD, and that museum was the central church of the Orthodox, and then it was converted to a mosque during the era of Ottoman control, except That the new Turkish Republic has established a museum in the year 1934 AD, and until now it has become the most important tourist museum in Turkey, and the entrance ticket price is 15 liras, and on Monday it is its holiday, and it is opened in the regular days from nine thirty in the morning until five in the evening. 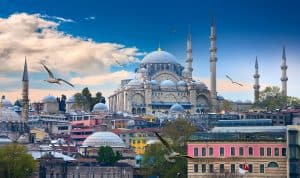 It is considered one of the third tourist areas in Istanbul, and the mosque was built 1558 AD with the permission of Sultan Suleiman the Magnificent of the famous Ottoman engineer of Amar Sinan, and that mosque is located in the middle of a group of architectural works which are shops, schools, hotels and bathrooms, and is located specifically in the Sulaymaniyah region of Al Fateh Admission is free and available 7 days a week. 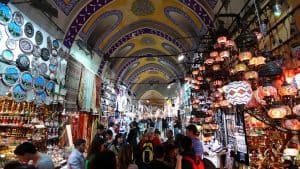 The covered market, which was built for the year 1461, has an area of ​​more than 30,000 square meters, and is considered one of the largest and oldest covered markets in the world, and in the tourist seasons it receives more than half a million people on a daily basis, which is a market for selling clothes, gifts and gold, and the market closes Its doors are from eight o’clock in the evening. 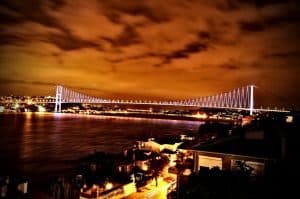 The Bosphorus Bridge has been completed since 1973 AD and is considered one of the two bridges that link Europe with Asia, and its length is 1,510 meters, and its width is 39 meters. This bridge won the fourth place between the lengths of the bridges that relate to the world, and was one of the longest bridges outside the United States, As for the current time, it is located in the sixteenth place between bridges. 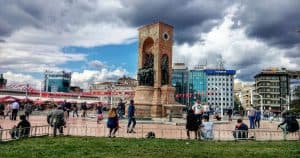 Taksim Square is considered one of the most important vital centers in Istanbul, and it is striking for many tourists throughout the year. It is also one of the most vital centers crowded throughout the year, especially Istiklal Street, which is not without tourists and residents of the state, except at late at night, The region has many important hotels, which are often the first thing that a foreign and Arab tourist descends to, and the tourist should not enter Istanbul without visiting the field.

The city includes hundreds of hotels and apartments that differ and vary, in terms of its luxury, which is characterized by the level of service that is more than wonderful, even its prices are distinct, among the most famous being the Siar Hagia Sophia Hotel, Fior Seasons Hotel Istanbul, Eresin Crown Hotel, Dosso Dossi Downtown Hotel, Golden Hon Sultan Hotel Ahmed and other hotels.

The most important tourist areas in Istanbul:

There is in the city of Yalova and that waterfall is located 8 km from the village of Uezpinar, which is characterized by its rare natural beauty, and the waterfall extends to the sides of the road that leads to many roads in the magnificence, and is used as a road and a walk for tourists and city residents

It is located in the city of Yalova, about five hours from Bursa, about two hours, and away from Istanbul by a distance of 280 km, surrounded by bush from the mountains, and the road that extends to it is characterized by dense trees such as pine tree and others, and fir in the form of forests and charming and attractive gardens.

The most important tourist attractions in Riyadh