Ellis Island, in the upper reaches of New York Bay, which was the gateway to more than 12 million immigrants to the United States from 1892 until 1954. 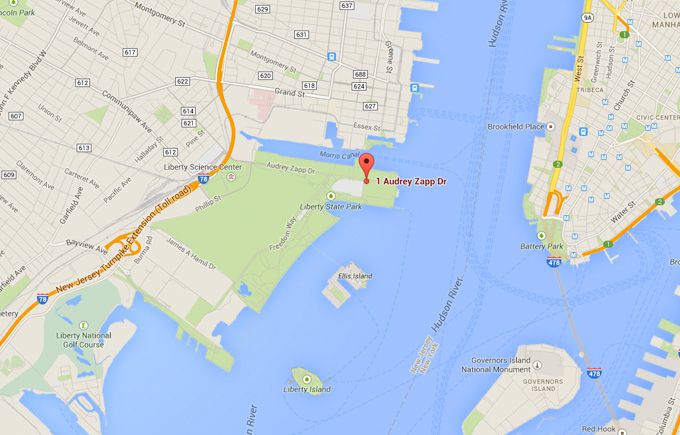 The island was greatly expanded with land reclamation between 1892 and 1934. Before that, it was much smaller than the original island. The island brought to the national memorial part of the Statue of Liberty in 1965, and hosted the Immigration Museum.
Ellis Island was opened in 1892 as a federal immigration station more than 60 years ago (closed in 1954). This island attracted millions of newly arrived immigrants, including about 40 percent of all current American citizens.
When Ellis Island opened, a major change occurred in immigration to the United States from northern and western Europe, Germany, Ireland, Britain and the Scandinavian countries, with more and more migrants flocking from southern and eastern Europe. Among this new generation of Jews fleeing political and economic persecution in Tsarist Russia and Eastern Europe (some 484,000 arrived in 1910 alone) and there are Italians fleeing poverty in their country. There are also Poles, Hungarians, Czechs, Serbs, Slovaks and Greeks, along with non-Europeans from Syria, Turkey and Armenia.
The reasons that attracted immigrants, and made them leave their homes in the ancient world because of war, drought, famine and religious persecution, include hope for greater opportunity in the new world. 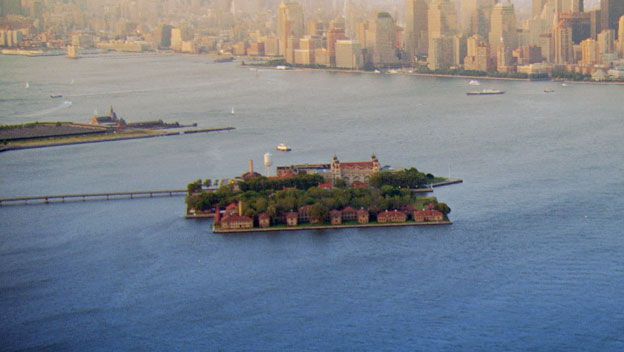 Ellis Island opened to the public in 1976. While the situation is different now, it is open to the public to tour the Ellis Island Immigration Museum from coming to the main hall to track their ancestors through millions of records. In this way, Ellis Island remains a central destination for millions of Americans who seek to learn the history of their country and, in many cases, to learn the stories of their families.
Geography
Ellis Island is located in the upper part of New York Bay, east of the State of Freedom Park and north of Liberty Island, in Jersey City, New Jersey, with a small section of New York City. Created largely through land reclamation, the island covers an area of ​​27.5 acres (11.1 hectares), most of which is part of New Jersey. It includes 2.74 acres (1.11 hectares) of the natural island with contiguous regions extending about 3.3 acres (1.3 hectares) and is part of New York. 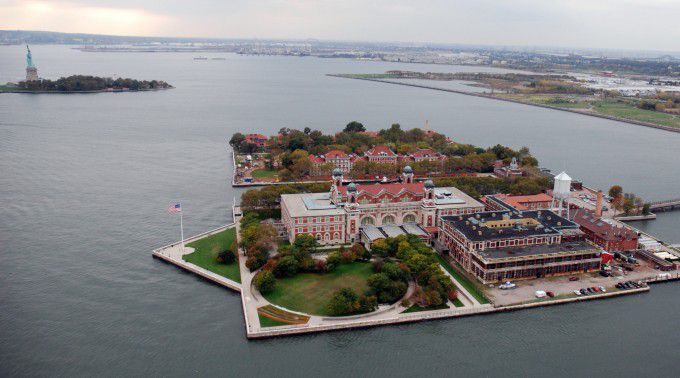 The whole island may be owned by the US federal government that has run it since 1808, and has been in operation by the National Park Service since 1965.
Much of the island, including the entire southern side, has been closed to the public since 1954. It has an area of ​​refurbishment on the north side and was closed again to the public after Hurricane Sandy in October 2012. The island was reopened to the public and the museum was partially re-opened on October 28, 2013, after major renovations.
timetable
1630-1770
Ellis Island contained much sand in the Hudson River, which is located just south of Manhattan. Megan Indians lived on the nearby beaches of Kioshk Island, or Gull Island.
1775-1865
Around the time of the Revolutionary War, merchant Samuel Ellis purchased the island, and built the pub on it to meet the needs of local fishermen. Ellis died in 1794, and in 1808 he bought New York State for the island from his family for $ 10,000. While the US Department of War paid the state to obtain the right to use Ellis Island to build military fortifications and stored ammunition, during the War of 1812.
1865-1892
After the Civil War, Ellis Island was vacant, until the government decided to replace the New York immigration station in Castle Park 1890. Immigration Control to the Federal Government, allocated $ 75,000 to build the first federal immigration station on Ellis Island. Artesian wells were dug, and the island doubled in size to more than six acres.
1892
The island officially opened the first stop of the Ellis Island immigration station on January 1, 1892, and it also received three large ships.
1893-1902
On June 15, 1897, it received 200 immigrants on the island, while a fire broke out in one of the towers in the main building and the roof collapsed, while no one was killed.
1911-1919
World War I began in 1914, and immigration to the United States slowed dramatically. Which led to a decrease in the numbers of waste people across Ellis Island: from 178,416 in 1915 to 28867 in 1918.
1920-1935
President Warren Harding signed the Immigration Quotas Act into law in 1921, after the post-war immigration results boomed in 590,971 people across Ellis Island. According to the new law, and the annual immigration of any country, it cannot exceed 3 percent of the total number of immigrants from a country in which the United States lives in 1910.
1950-1954
By 1949, the U.S. Coast Guard had taken over most of Ellis Island, using it for office space and storage. An Internal Security Act 1950 was passed, with the exception of migrants arriving with previous links to communist and fascist organizations. Nevertheless, Ellis Island witnessed a brief return in activity. Renovations and reforms were made in an attempt to accommodate the detainees, who numbered about 1,500 at a time.
The 1952 Immigration and Nationality Act, along with the liberalized detention policy, caused numbers to drop below 30.
All structures were officially closed on Ellis Island in November 1954.
1965-1976
In 1965, President Lyndon Johnson issued Proclamation 3656, which placed Ellis Island within the jurisdiction of the National Park Service as part of the Statue of Liberty for the National Monument. Ellis Island opened to the public in 1976, and included long tours. During this year, more than 50,000 people visited the island.
Also in 1965, President Johnson signed the new Immigration and Naturalization Act, and the Hart Cellar Act, which abolished the quota system earlier on the basis of national origin and laid the foundations for the modern U.S. Immigration Act.
1998
In 1998, the United States Supreme Court announced that New Jersey had authority on the southern side of Ellis Island.
2008
Plans to expand the Ellis Island Immigration Museum were announced, until it was completed in 2011. As the museum explored on Ellis Island (1892-1954) it would be expanded to include the entire experience of American immigration to this day.