Learn about Neuschwanstein Castle in Germany

Neuschwanstein Castle is located kilometers from the Austrian-German border in one of the highest hills in the high Bavarian Alps where this magnificent architectural monument attracts approximately 1.5 million tourists annually who come from all parts of the world to discover its unique architecture and halls that collect stories and tales, most of which were inspired by works The operatic author, musician and playwright Richard Wagner. Through this article, we will learn more about it and who was behind it!

The history of Neuschwanstein Castle 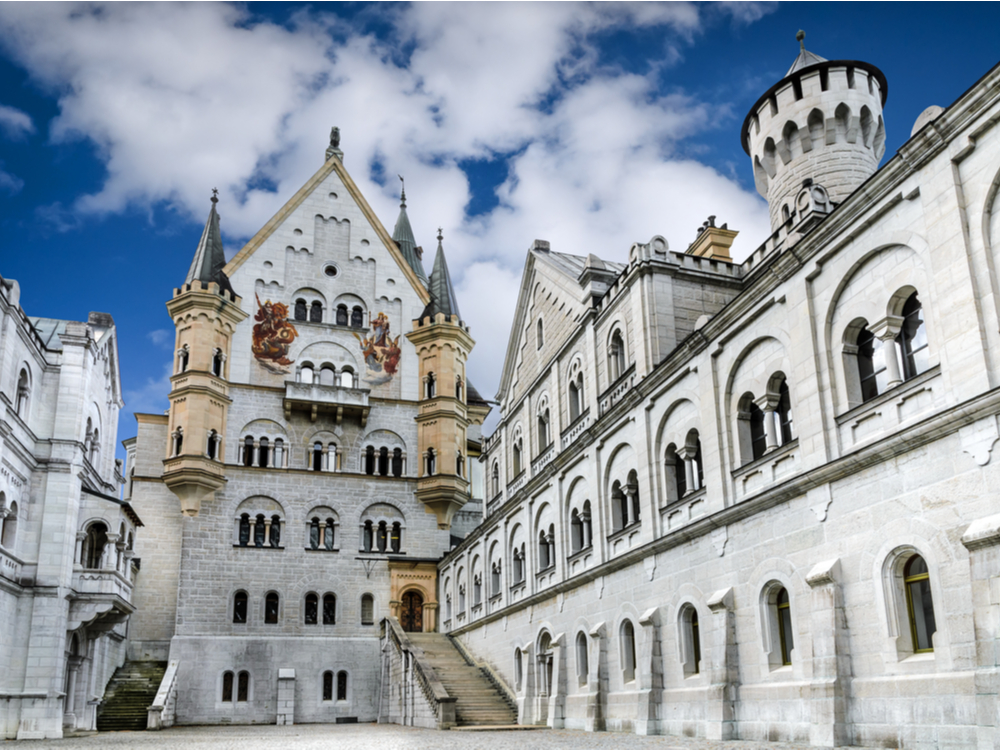 Ludwig II loved the tales and stories and wanted to represent them in this wonderful palace
King Ludwig II assumed the rule of Bavaria when he was 18 years old and he lacked experience and knowledge in political affairs, as he could not control the matters, as he found himself after two years under the rule of Prussia, and he could not bear the situation and fled to build this palace and hide in it along with two other palaces, namely Linderhof and Hirinchemsey. This magnificent architectural design was inspired by the castle he grew up in, which resembled medieval architecture, which made him one of the most famous palaces in Europe, especially after he wrote around him many legendary stories and was adopted by Walt Disney Company to film its films as “Sleeping Princess”.

Architecture of the palace 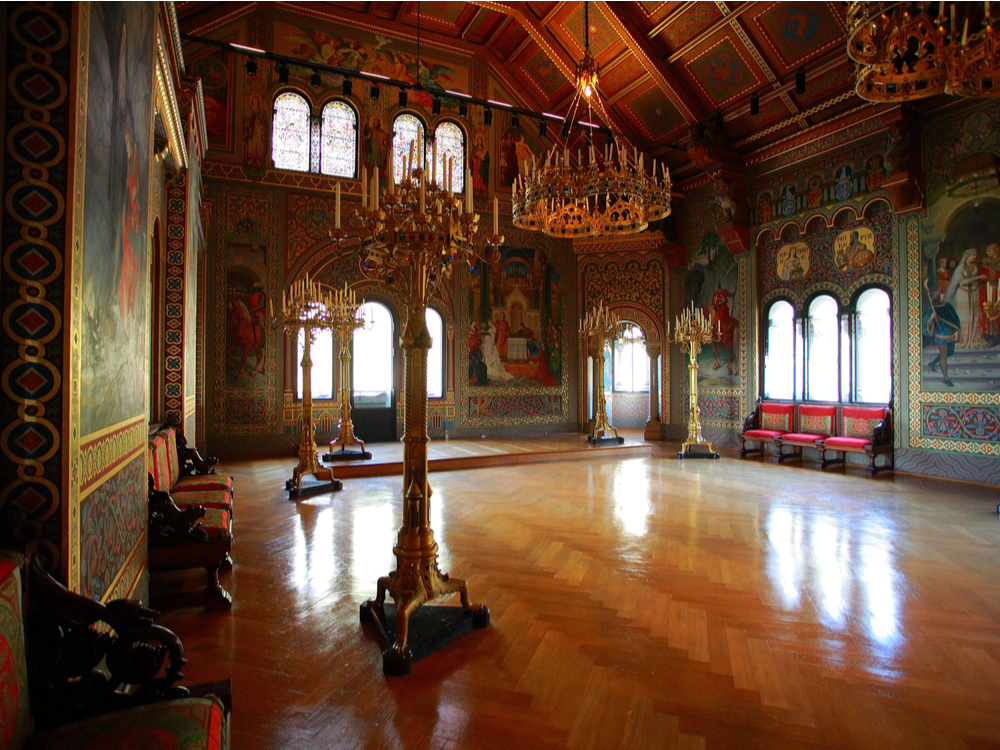 Each hall in the Neuschwanstein Castle tells a play that was taking place at Wagner’s Opera
The architect Christian Yanck was commissioned to design the palace by order of King Ludwig, as he wanted this palace to include the largest number of German theatrical stories that took place in Wagner’s Opera, where the palace has many spacious halls and caves decorated with different colors that reflect some of the sense of strangeness that was in Wagner’s works, and sound effects have been added inside to allow all visitors to enjoy this beautiful and strange establishment at the same time that the Byzantine character of the domes gave it a charming look.
The largest halls in the palace are the singing hall, which is the embodiment of the author of Lohringrin and Parvsal, which was envisioned by Wager. The king wanted to hold all the important ceremonies in this amazing hall, but the king died before any ceremony was held there, and he could not finish building 14 rooms instead of 200 rooms That he plans to build and furnish. 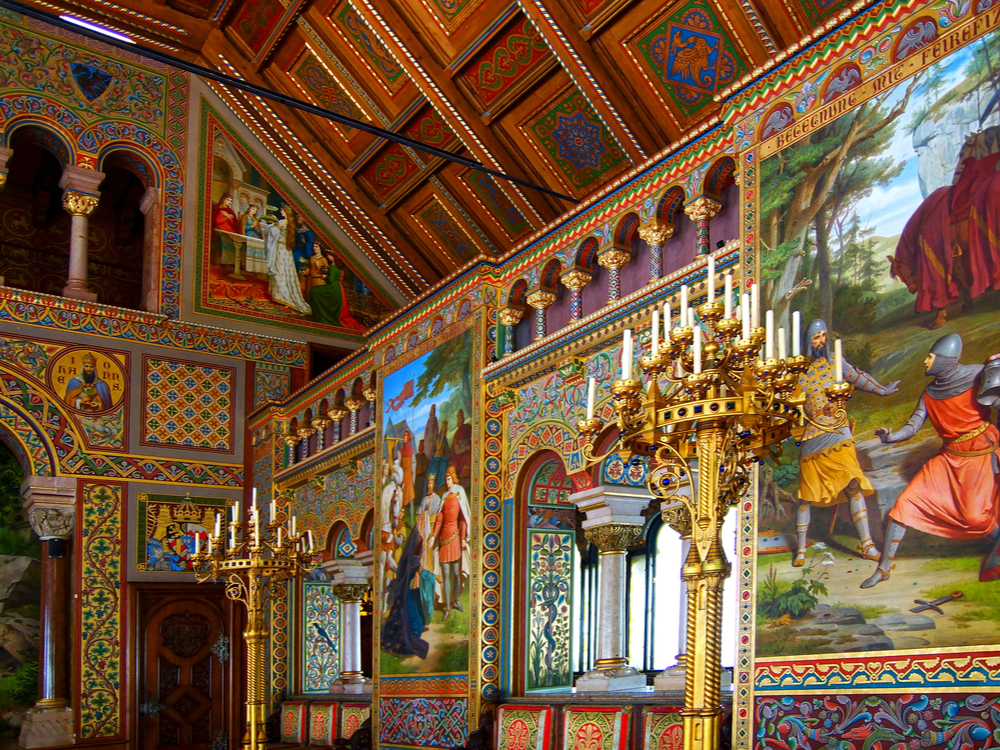 The romance hall is one of the most beautiful halls in the Neuschwanstein Palace, where workers worked for 4 years
The paintings in the halls contain many epics that were envisioned by music composer and playwright Richard Wagner in his operatic works. Among the most prominent of these halls is the romantic hall that represents one of the most famous medieval tales that workers worked on workers day and night over a period of four years to complete them, but it did not He writes to the king about her vision as he was arrested before that and he is said to have gone crazy before people found him dead by the valley in mysterious circumstances.
After his death, this palace was classified from historical medieval palaces due to its ancient architecture, which resembles ancient Byzantine architecture, but it is not so, as the palace in its entirety is the embodiment of fantasies and stories that took place in the imagination of Wagner only.
Discover the best travel deals for Germany with Arab travelers! 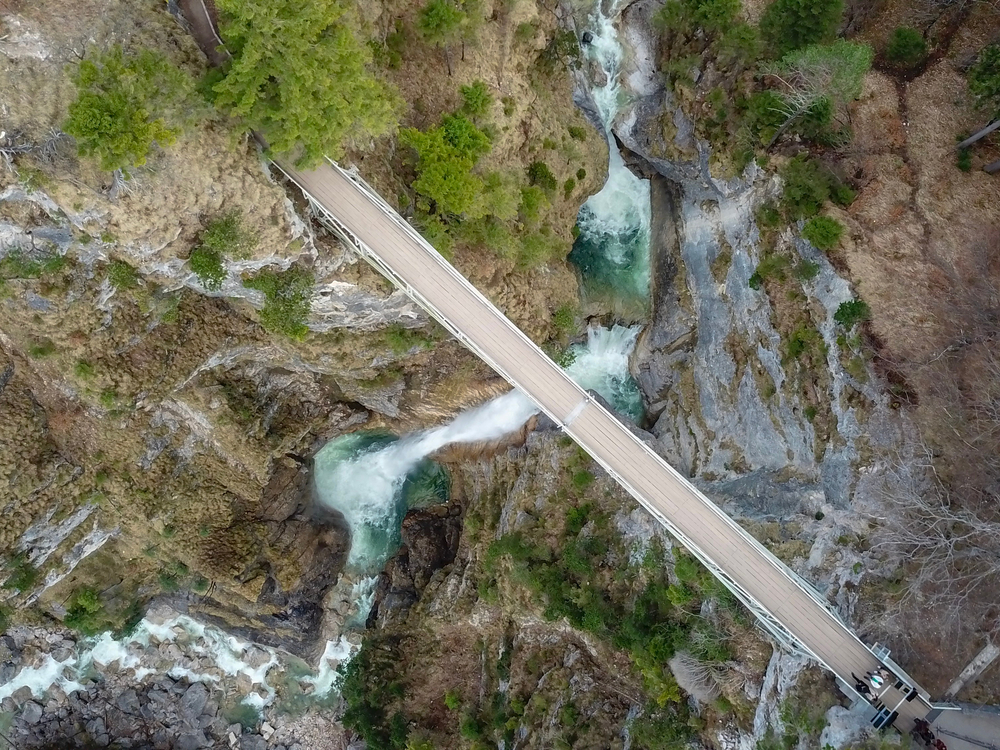 Tourists come to Marie Bridge to take pictures of Neuschwanstein Castle
The Mary Bridge has a charming view of the palace, about ten minutes away from it, and tourists usually go to take great pictures of the palace. The story of this bridge dates back to 1840, when King Maximilian II ordered the construction of this bridge to enjoy watching his palace from afar, and he chose to name it after his wife Marie. The bridge was built of wood before being replaced by steel in 1886.
Tourists can immediately enjoy the view of the palace from far away, as well as go on a trip between the wonderful trees and the beautiful mountains surrounding the palace, which takes a whole 45 minutes. 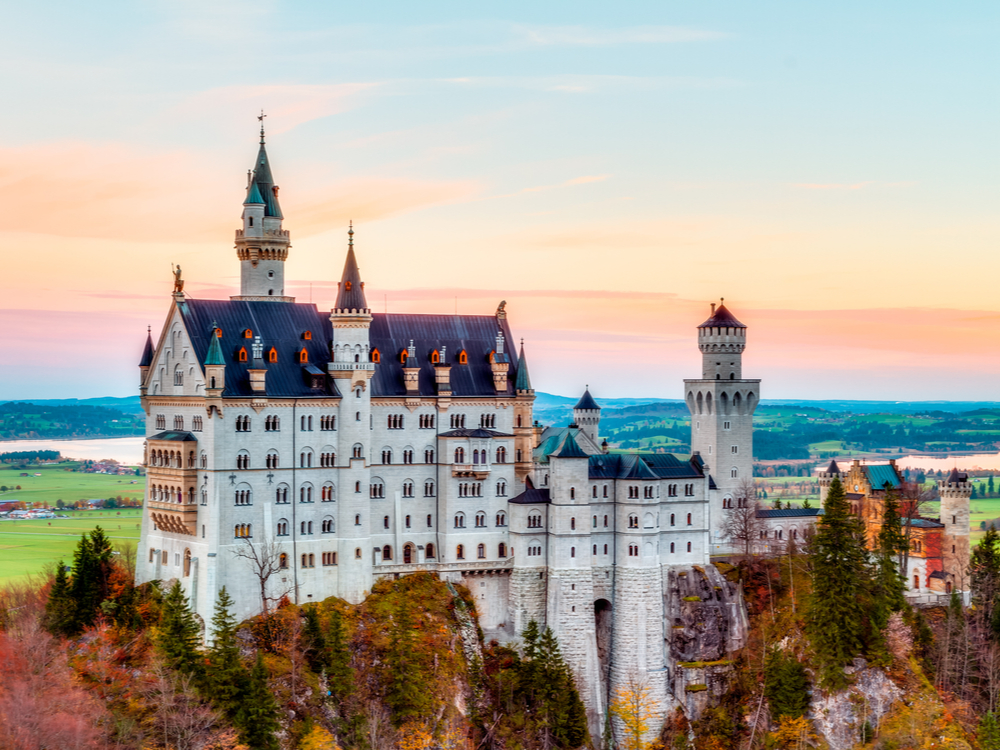 You can not enter the palace on your own, but you must reserve in advance in the list of tours that are held there, especially in the summer, when the turnout is heavy. For adults, the price of an entry ticket is 39.75 euros, and for children the price is 22.75 euros.

Where is the city of Venice?

What is the most beautiful city in the world