Learn about the best famous food in Lebanon

It is not possible to prepare any Lebanese daily trip without Fattoush, as some believe that the dish was a popular authority in the old days in Lebanon, Palestine and Syria, and its vegetables varied according to the diversity of the country.

In Palestine, this dish that includes multiple vegetables is called the name “Bou Mleih”. In southern Lebanon and the Bekaa, the vegetables and marinade were different, as the salad included margarine and capsicum.
Fattoush ingredients include no less than 5 varieties of vegetables. Fattoush is also prepared through the use of lettuce, tomatoes, cucumbers, radishes, onions, peppers, olives, mint, white cabbage, green thyme, parsley, cows, sumac, along with lemon juice. Sour, olive oil, apple cider vinegar or white grape, bread, salt and pomegranate molasses
The Fattoush dish includes about 110 calories per 6 tablespoons of food, which can be increased when crumbs are placed.

Tabbouleh from Lebanon to South America

Among the most famous and famous food in Lebanon: Tabouleh, which is a popular Mediterranean authority and is one of the varieties of mezza, the tabb is known in Lebanon, and it was found in abundance among the rest of the Mediterranean basin countries.

Tabbouleh consists of parsley, tomatoes and bulgur, and olive oil, lemon, and salt are added to it, as some see that tabbouleh was from the well-known Mediterranean authorities and the Lebanese modernized it, while others see it as returning to the Chaldeans and Assyrians despite the lack of historical references.
Lebanon threw the largest tabbouleh dish in the world for many years, as some believe that the introduction of bulgur into the tabbouleh mixture occurred in Lebanon during the Mamluk era, especially in the Lebanese Bekaa Governorate due to the widespread cultivation of wheat in it and for tabbouleh to be one of the most important heritage foods in the twentieth century. Also known in Brazil due to the presence of Lebanese immigrants, it is known as tipili.
Tabbouleh contains 1000 calories for every 6 tablespoons.

Fattah is one of the popular foods in Lebanon, Syria and Egypt, and it is called in Lebanon with two names: Fattah (in the case of adding meat to the dish or the legs of sheep), and watering it (without meat).

This dish is eaten on a daily basis in Lebanon, and it is considered one of the popular dishes among those fasting at breakfast during the month of Ramadan.
Fattah can be prepared from boiled and garlic well boiled, which covers a thick layer of croutons or fried bread, and placed above salted yogurt.
For decorating, fried pine nuts and crumbs are placed on the face of milk, and dazzling minced meat with sweet and fried spices can also be applied.
Fattah includes 93 calories for every 4 tablespoons.

Of the famous food in Lebanon, the name of this food is attributed to a priest who lived in the first century AD in Lebanon and was loved by his pupils and his flock called “Baba Ghanouj”. One day, one of his pupils prepared a special meal consisting of eggplant and vegetables, but the priest refused to eat it alone and distributed it to individuals, so people called this food in the name of “Baba Ghanouj” and this name still exists. 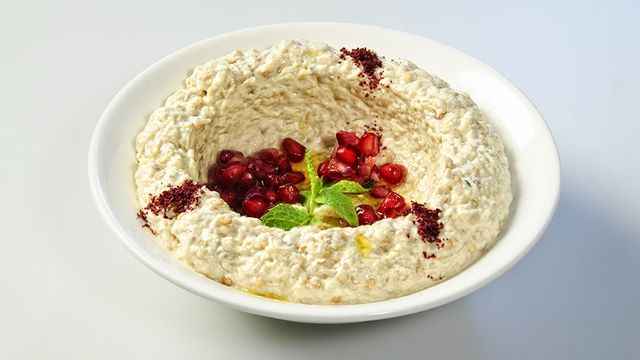 Pope Ghanouj is mainly made of eggplant and mixed with tahini, spices and various other restaurants, including garlic. Sometimes, the eggplant is roasted over an open fire before peeling, until it takes a smoky taste.
Baba Ghanouj includes 52 calories for every 5 tablespoons.

The origin of this meal dates back to the Ottoman Empire in Turkey, and moved from it to the countries of the Middle East and the countries of the Caucasus, Balkans, Iraq, Egypt, Algeria and the Levant and possesses several names including ylangi, telegram, sarma, dolma, arish paper, varicose leaf and stuffed leaf grape. 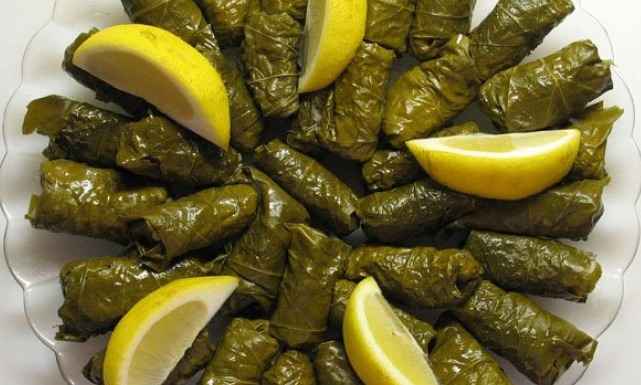 Grape leaves are prepared by wrapping them with minced meat, rice and vegetables, and spices and flavors are placed on it, and sometimes they are not stuffed with meat, so the food is called (grape leaves with oil), which is the meal that the Lebanese had made, and it is similar to the chard paper stuffed with rice, chickpeas, parsley, tomatoes and spices, and it is called boil paper With oil.

Famous food in Lebanon, this meal is one of the old meals that exist in Lebanon, especially in the southern Lebanese regions and the Bekaa, where the agricultural societies that have more kitchens and grains. 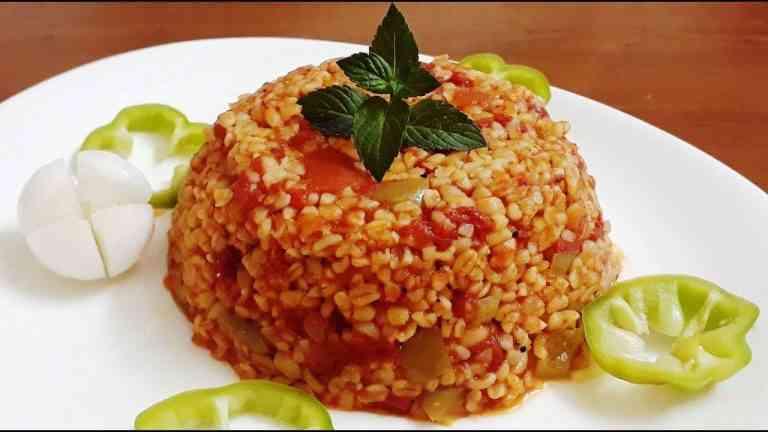 And this simple meal is prepared from bulgur and cooked tomatoes together, and it can be eaten with green onions or land, and some like to eat it with yoghurt. 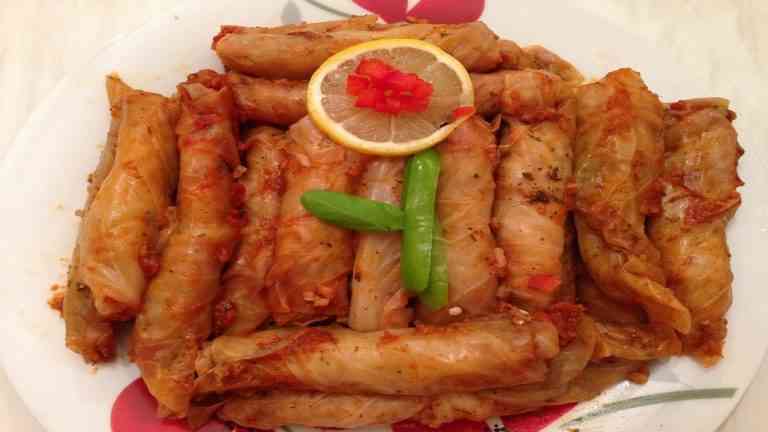 Vegetables, whether zucchini, eggplant, squash, pepper or potatoes, are clicked, and the pulp is emptied, and it is stuffed with a mixture of rice and minced meat, so that the stuffed vegetable pieces are placed in an organized and organized manner in the cooking pot.
And add to it pieces of tomatoes, tomato pods or sour sour juice, and then put on top of a cylindrical piece of pottery to deal with the flood of stuffed pieces during cooking, and cooked collectively.

It is called the Frike and Freekeh in Lebanon or Al-Qarah-Khurman (in northern Iraq). It is a grain of green wheat before it dries or green barley harvesting its spikes while it is green and is placed on a fire to roast, then crushed to become like bulgur, and cooks as the bulgur cooks on Water from meat or chicken, the top of which is added large pieces of meat, and is usually eaten with milk.

Chickpea meal with tahini is one of the old foods that humans knew about, and it is difficult to determine which country started preparing this meal, due to the claim of many countries to start preparing it. But what is known to him is that the first people to prepare chickpeas are the inhabitants of Palestine, Lebanon and the ancient Syrian people, so that the chickpeas has ripened in their lands for thousands of years.

On October 24, 2009, Lebanon joined the Guinness Book of Records as the largest hummus dish with tahini worldwide.
Chickpeas are prepared by grinding the chickpea grains and mixing them with tahini, olive and sour oil, and the chickpeas are placed on the fire to cook a suitable boil until they are cooked well, then mashed and put to boiled chickpeas a little bit of sesame flour and its oil (tahini), salt and some lemon juice, but some put Ground garlic, can also be placed on chickpeas meat, pine, vegetable oil and salt.

It is one of the famous foods in Lebanon, Syria, Jordan, Palestine and Iraq, and it may differ slightly from country to country in terms of form and taste, methods of preparation, preparation and presentation.
Stuffed and fried kebabs are one of the important foods in the Lebanese and Syrian travels, and with the Ottoman occupation of the countries of the region, the Turks came with them with a recipe for cooking with milk, and the Lebanese and Shami put the cooked milk for their food. 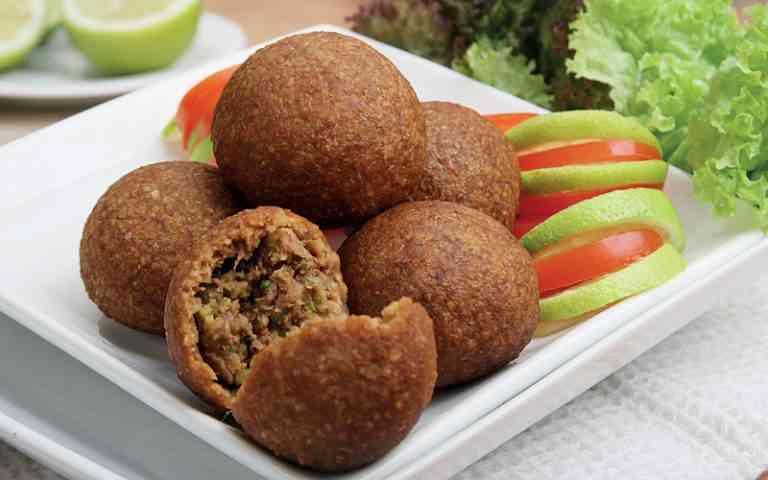 The kibbeh is made from raw, washed and filtered bulgur, raw ground ground meat and mixed well to be like dough, then pelleted and stuffed with minced lamb, fried and mixed with nuts (pine nuts or almonds) and then fried.

Almajdara is one of the famous Arab cuisine in Syria, Lebanon, Jordan, Palestine and Iraq, and it mainly consists of lentils, rice and onions.

Learn about the most famous foods in Bangladesh