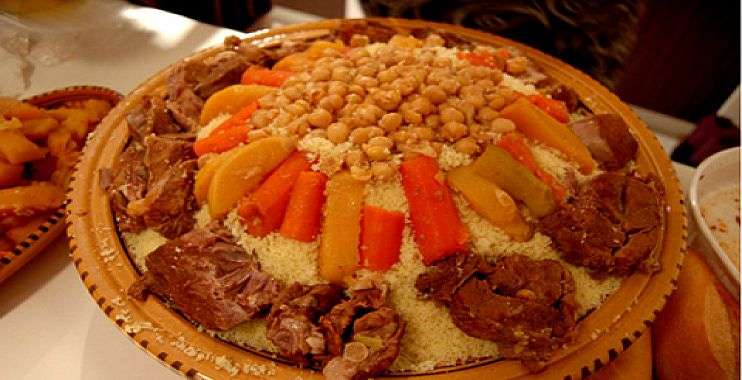 Algeria’s national dish is couscous and steamed wheat with lamb or chicken, cooked vegetables and broth. Common flavors include onions, turnips, raisins, chickpeas, and red pepper, as well as salt, pepper, cumin and coriander. Moreover sweet couscous can be served with honey, cinnamon or almond flavor.
Other common foods are hot soup. Dolma, and burek, which is one of the Algerian food items that consists of minced meat with onions and fried eggs
The traditional Berber meal popular among the poor is a cake made of mixed grains and a drink mixed together with goat’s cheese, dates and water.
Strong black coffee and sweetened mint tea is a very popular drink in Algeria

It is celebrated annually by the Algerians for a period of ten days after the birth of the Prophet, and it is a tradition inherited from one generation to another, where the celebration lasts for a week, in which camels are slaughtered, and lunch and dinner banquets are organized for three days for the people of the city and the children of the path, as well as local folklore parades and a mix of drums and folklore.

Celebration of the Prophet’s birthday

What the residents of the area consider as the night when people do not sleep until the beginning of dawn, where they are usually held in mosques and homes, and praise continues until late at night.

Celebration of the season of Sidi Mohamed Al-Mukhtar

On October 10 of every year.

– The traditional outfit is a white wool cloak, called gandoura, with a long cotton shirt.
Sometimes the headwear, called “Bernos”, extends to the shoulders; it is made of linen for the summer and wool for the winter. The gown may be simple and sometimes it will be embroidered to appear luxurious, indicating affluence.
Roads dating back to the Roman era are still used in pottery production by women from the mountains of the Aures tribes where pottery, jewelry, and woven works are very popular in the markets.

The traditional headdress is a red peep wrapped in a white cloth.

As for women’s clothes, they are similar, although they are completely covered by silk as they are wrapped from head to foot, and are worn over loose pants all the way to the ankle.
The Tuareg men can be distinguished by the length of the indigo fabric they wear and wrapped around the head in a turban as it extends over their robes, covering them completely except for their eyes.

Marriages are usually arranged in Algeria by either the parents of the couple or by the matchmaker. Despite its spread, the use of a matchmaker in Algeria, where the influx of Western culture has had little impact in this area, the majority of marriages are still arranged. Marriage is not only the union of two people, but also the union of two families.

The traditions of the Algerian wedding

The two families can decide to hold two parties, each one organizing one; or they share the responsibilities of organizing one big party.
Before the wedding day, the groom buys gifts to his bride and her mother to show respect to them and their families.
On the wedding day, in the morning the bride goes to the Turkish bath, with the closest women to her family. Where these rituals symbolize purity and prosperity. Women help her and sing to her.
After that, the bride goes to her parents’ house, wears a traditional green dress and is ready to decorate her hands and feet with henna as she goes to the hairdresser with women from her family.
The traditional Algerian dress takes a lot of time to be ready, handcrafted and usually made. Seven different dresses are prepared, including those that represent the region to which the bride’s family belongs. Each dress is accompanied by a quantity of heavy jewelry 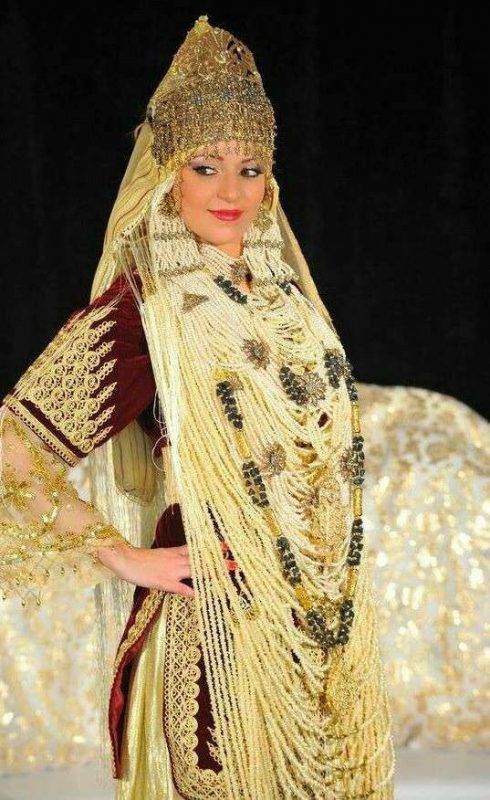 Pigeon Day: It is the first step of the ceremony, and you must go to the bathroom, and it is believed that leaving it brings bad luck to the bride in her marital life

Henna Al Habib Day: It is a celebration for women, in which henna is drawn in the form of flowers and decorations that mean bringing good luck and increasing fertility, and the bride must not do housework until the henna is gone

Henna Day: The day before the wedding, and the bride sends the export in the morning, which are curtains, carpets, clothes, and others to her future home. In the afternoon, the groom sends gifts and henna to his future bride with the women of the family who dance and sing all the way from the groom’s house to The bride’s house 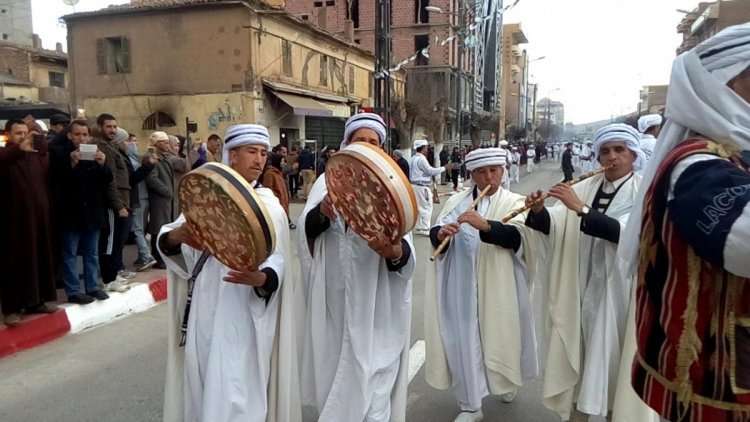 Arab music is associated with traditions of storytelling, and it often tells stories of love, honor and family.
The most famous Algerian music abroad is the rai, which is an elaborate composition of folk music.
Hospitality is part of the culture of Algeria as it is in the rest of the Arab world. The Algerians are known for their hospitality. The visits are the mainstay of social life, most of which are within the extended family circle. Where the host provided tea or coffee and sweets.

Find out all distances between cities of Albania

All you need to know about the Asian country of Laos