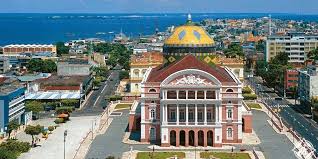 The city’s most famous building is the Italian Opera House, which was built in the Renaissance style and opened in 1896, and is now one of the national monuments that made Manaus a center of civilization and culture.
Teatro Amazonas was built from materials imported from Europe including the Italian marble used in the entrance, the English wrought iron made from the stairs, the 198 chandeliers from Venetian Murano glass, the dome built in the 20th century from 36 thousand German stone, in addition to the materials That was brought from France.
2- Contro das Aguas
A visit to Manaus is not complete without seeing the region of Contro das Aguas, which is one of the natural wonders of the world. It is located at 20 km to the southeast of the city where the dark colored waters of the Rio Negro meet with the muddy waters of the Rio Sulemois to form a mix of the two rivers together which extends along 6 kilometers without mixing, and this is clear from the air during flights.
The reason that the two rivers do not mix is ​​due to the difference in density and temperature, and boat trips in this place are the most popular in Manaus, as it is a way to see the three different areas that are crossed by a complex network of rivers, canals and lakes, namely the Rio Negro region, the Solimos region and the Amazon.
3- Anavilhanas Islands 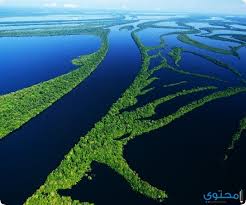 This archipelago, which is located in Rio Negro between Manaus and Novo Erao, consists of 400 islands and covers an area of ​​350 thousand hectares, and contains hundreds of lakes, water channels and submerged forests that extend for a distance of 90 kilometers, when it is high between November and April, the islands are flooded Only 180 islands, most inhabited by squirrels, monkeys, and various groups of reptiles and birds.
4- Mercado Adolfo Lisbon Market
This building is one of the most important sights in Manaus in addition to being a national landmark, located on the bank of the Rio Negro River, and it features an impressive design with stained glass windows and iron frame made in Gustave Eiffel workshop in Paris.
Aside from architecture, the market highlights the bustling life of the city and provides a glimpse into the everyday life of the locals, and houses a mixture of stalls selling everything from fresh fish and tropical fruits to shirts and handicrafts.
5- Ecologico January 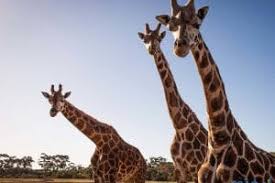 Covering 688 hectares, this eco garden is about 45 minutes by boat from Manaus, and includes a variety of ecosystems including hard land, alluvial plains and submerged forests.
The best way to explore the park is by steamboats that cross the narrow waterways between plants and giant kapok trees, and one of the most beautiful monuments in Ecologico Januari Lake Victoria amazon covered with floating leaves up to two meters in diameter.
6- Rio Negro Palace
This impressive palace was built in 1903 to be the residence of German rubber dealer Valdemar Scholes, and later it became the seat of the Amazon state government, and eventually it became a cultural center in 1997, and visitors can wander around the main house and art gallery next door.
7- The North Man Museum
This ethnographic museum houses wide collections of exhibits that highlight regional culture and folk traditions such as folklore, religion, festivals, arts and crafts, as well as archaeological finds and regional products including rubber, cashew and wood.
8- India Museum
This unique museum offers over 3000 pieces illustrating the way of life of indigenous peoples living along the Rio Negro summit, and provides a close look at the culture and traditions of some tribes, the best known of which are the Salesian Sisters and Mato Grosso.

If you are a fan of adventure, try visiting Takupan volcano in Indonesia