The casein is prepared by boiling the barley flour in a small amount of water with continuous stirring until it ripens and then it is formed in the form of a pyramid in the pot (preferably not soft in moisture).

And it is placed soup (cook), which includes a potato cooked, fava beans or soup of meat and boiled eggs, and is eaten alongside green pepper and lemon. 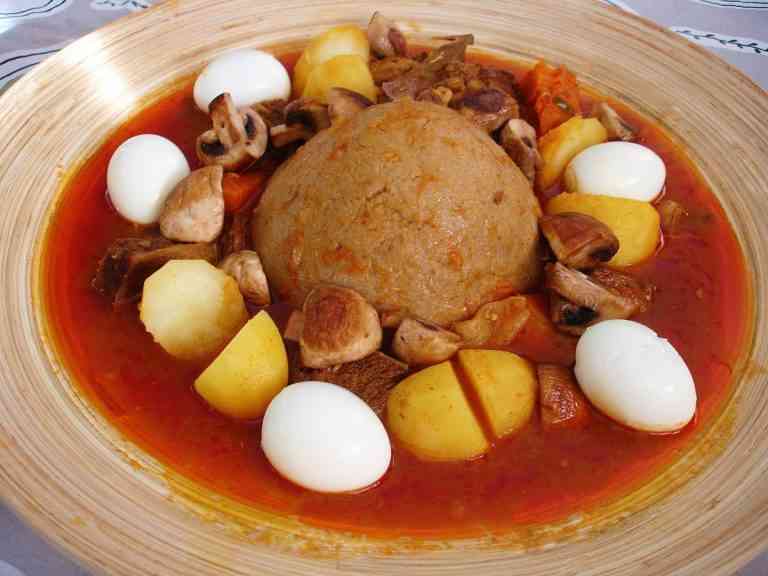 Couscous, like bazin, is one of the main daily foods, especially in the Tripoli region. It is eaten on various occasions and it consists of wheat semolina or barley and is cooked by water vapor or cooking vapor. There are more than one of the most famous couscous.
* Couscous with different vegetables
* Couscous onion (cooked with onion slices, chickpeas and meat) 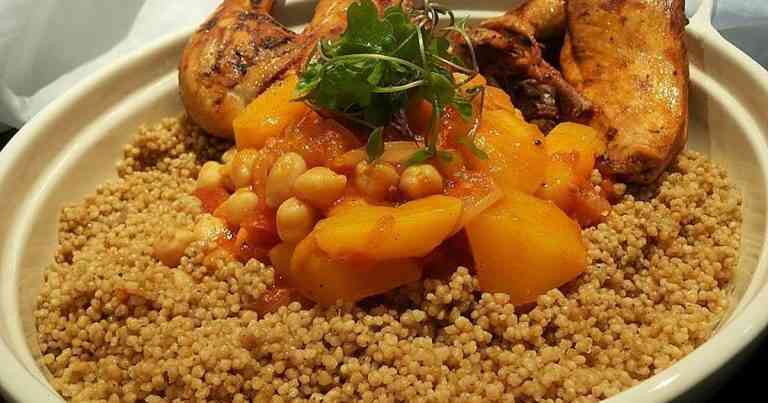 Al-Rashda is one of the famous foods in Libya in the city of Tripoli and its environs, and they are of two types:
The rationality of the twirl.
Rushdat Kaskas.
* The first is presented as a main food for the family, while the second is covered in occasions and some joys. 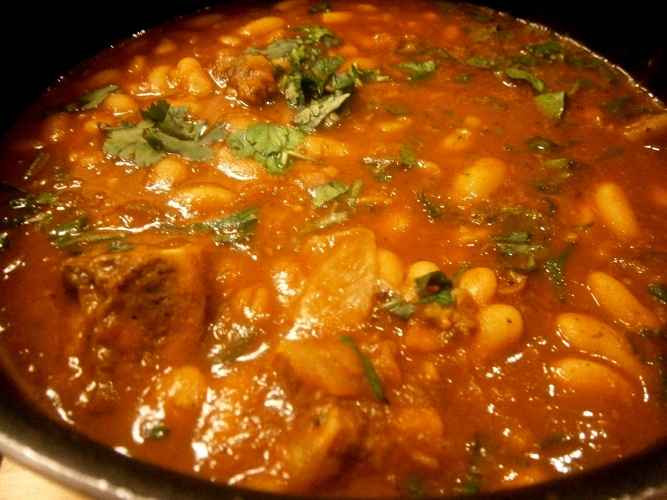 Rushdah Al-Burma:
Perforation rosette consists of white flour (varina) and is prepared by placing some water into the flour to make a medium-moist dough with uninterrupted kneading for a period of no less than 10 minutes. The dough is cut into small portions and spread out in a rectangular shape and then divided into small fish fillets and placed To cook during boiling.
This cooking may include multiple legumes, including lentils, chickpeas, and beans, or it includes some vegetables such as carrots, potatoes, cabbage, peas, and others. A sedimentary grease may be placed on them to give a wonderful taste and be eaten hot and not eaten on occasions.
The rush of couscous:
As for the rosette of couscous, it also consists of white wheat flour (varina) and is prepared by putting some water into the flour to prepare the dough, with continuous kneading (continuous scrubs), then cut into small parts and each piece takes a rectangular shape in the form of a thin layer and then fragmented into pieces Very thin.
Then it is cooked with water vapor with continuous melting, then it is emptied of couscous and individually spread well and left to cool.
At the same time, its cooking is composed of sliced ​​onions (onion), chickpeas, lamb, and then the rationalization is returned to the couscous again to complete cooking on the steam of her cooking. After finishing cooking, pour it into a huge dish and put a quantity of her cook on it with continuous stirring and then put Onion with some spices and served for eating.

The main types of pasta are of two types:

Macaroni pasta .. It is one of the popular dishes in Libya and it is found extensively, and it is eaten at dinner or food and not served on occasions

– How to prepare :
The pasta is prepared by adding pasta to the cook while boiling it. The cook contains various types of vegetables or without vegetables. The cook may contain bacon (qarqosh) and eaten hot.

Onion pasta preparation method:
The pasta is boiled in water until ripe, then boiling water is poured and washed with water, then the onion cooker is put on it as it was prepared in couscous and the onion cook can include lamb, poultry, beef or minced meat, and complementary foods are served with it including mixed salad or pickles Variety and tea is eaten after eating it. 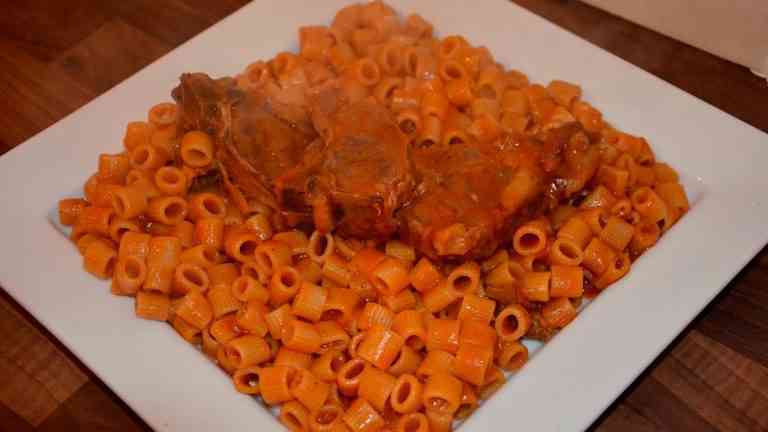 Rice (rice) .. the Libyan way is one of the famous foods in Libya 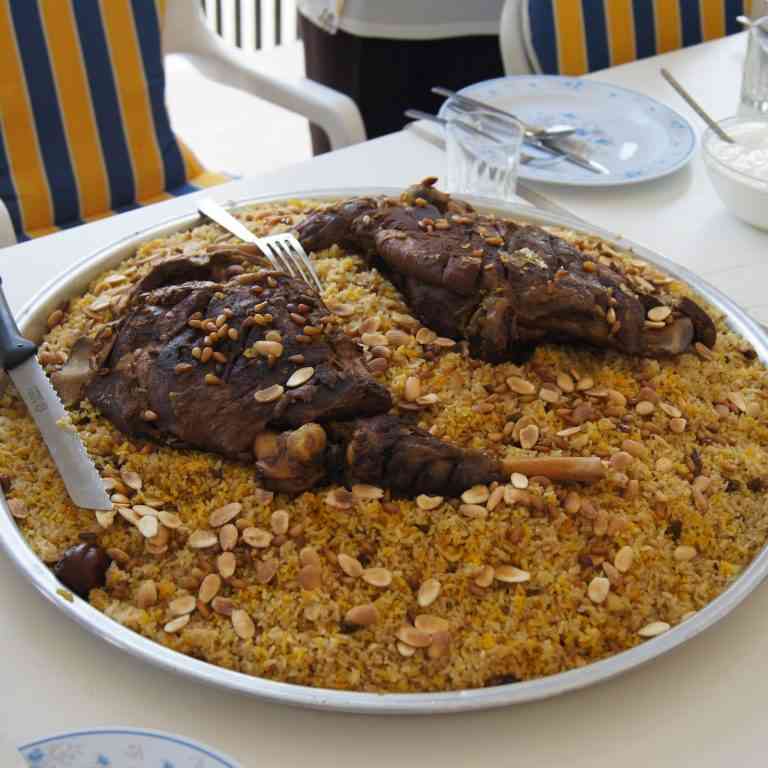 Crumbs … are one of the popular foods in Libya

Crumbs are a popular cuisine in Libya and are found extensively in the southern regions of the Jamahiriya and some areas of the western mountain, and there has been a difference in nomenclature and methods of preparation relatively. This meal is prepared from bread flakes consisting of wheat flour and may be mixed with a small percentage of Farina flour and use the oven Folk (enlightenment) or enthusiasm to ripen food.
The cooking accompanies the crumbs from a mixture of some vegetables that are in the area, along with some legumes, especially chickpeas, with some varieties of meat, especially lamb and sometimes with poultry meat.
And the cooking is placed gradually and in the form of alternating or successive layers where the first layer of cooking is added at the bottom of the dish followed by a layer of bread flakes (crumbs) and so on .. and in the super layer are put vegetables, including onions, legumes, etc. .. along with the meat. 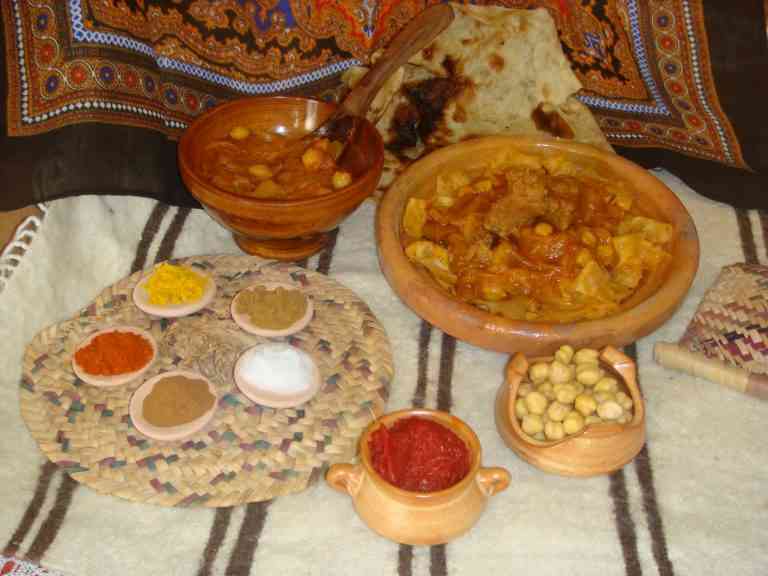 In addition to the previous basic foods – stuffed foods such as:

1- Kofta 2- Padded
3- The Gangs 4- Globalization
1- Kofta
Kofta consists of minced meat, minerals – onions – spices – hot pepper – garlic – cumin whale – tomato paste – salt – eggs – dry baking powder, a small amount of flour and oil for frying.
Kofta is one of the popular foods rich in fats, protein, carbohydrates, vitamins and salts.
2- The padded
Includes ground meat – minerals – onions, spices, chili pepper, tomato paste – salt, eggs, and ghee – dry baking powder.
– How to prepare :
The mixture is one of the previously mentioned contents, and a thick piece of potato is obtained. Two slices of it are prepared that are not separated from each other. Part of the mixture is added between them and put in the egg solution, then the flour and fried in oil.
The padded is a food rich in proteins, vitamins, carbohydrates and salts, but the fat percentage is large.
3- The Gangs 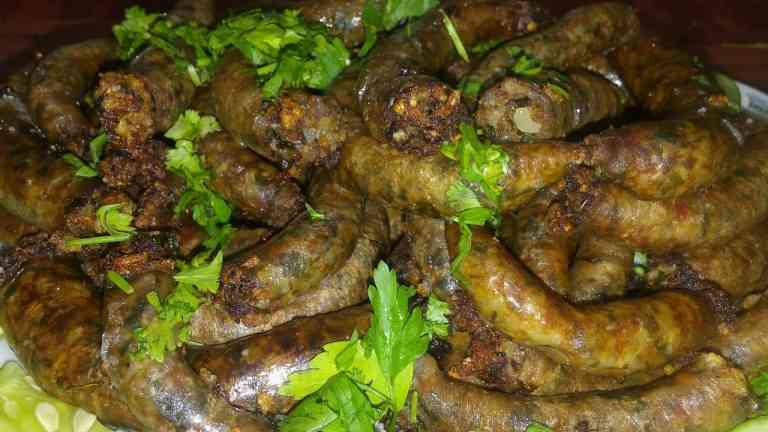 The mixture of juices consists of small portions of liver, kidney, meat and heart, in addition to green onions, minerals, coriander, dill, tomato paste, spices, and a little oil and rice.
– How to prepare :
The intestine (lamb or bowel intestine) is prepared and thoroughly cleaned and then stuffed with the mixture. The tripe is thoroughly cleaned and washed and divided into suitable pieces. These parts are stuffed with the mixture, then the tripe is closed with needle and thread and the noodles are cooked in a cooker.
4- Globalization
The globalization mix includes meat – minerals – onions – mint – tomato paste – ghee – salt – spices – rice.
– How to prepare :
And this mixture is stuffed with many varieties of vegetables, including white pumpkin filling, grape leaves, lettuce salad, tomatoes, onions, potatoes, sweet pepper, cabbage, and wire

How to obtain a visa to enter Indonesia

Find out the best places to shop in Denmark