Tourism in Cebu, the Philippines … and 15 most beautiful tourist destinations

What is the capital of the Republic of Georgia

Home ⁄ Turkey ⁄ Mosques of Turkey Istanbul .. Learn about the largest mosques in the world in the city of “minarets” ..
Share on
Facebook TwitterWhatsapp

6 of the best Turkish opium hotels recommended by 2022

Information of interest to every tourist about Motiongate Dubai

Mosques of Turkey Istanbul .. Turkey includes the largest number of mosques in the world, as it includes the largest, and its most famous city is called “Istanbul” the minaret city, and Arab travelers provide you with a guide to learn about its mosques ..

Turkey is the “country of mosques” .. Learn about the most famous and largest mosques in the world .. 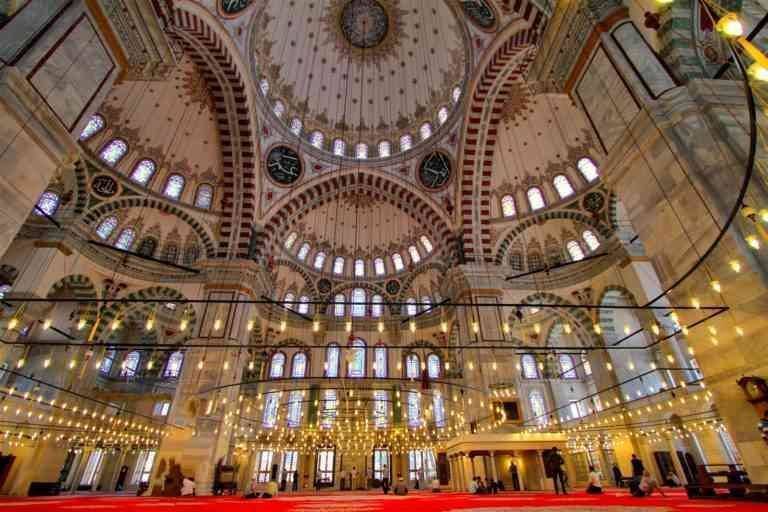 Turkey is “the country of mosques” .. Learn about the most famous and largest mosques in the world .. Turkey has the advantage of including the largest number of historical mosques, and the mosques of Turkey from the inside enjoy the wonderful design and charming Ottoman architecture, as it includes the largest mosque in the world which is the “Shamlija Mosque” “In Istanbul, with an area of ​​15 thousand square meters, we offer you, dear tourist, the mosques of Turkey Istanbul and their names: Sultan Ahmed Mosque, Al-Fatih Mosque, Sulaymaniyah Mosque, Kocatepe Mosque, Central Mosque, Bursa Grand Mosque, New Mosque, Ortakoy Mosque, Bayezid Mosque, Hagia Sophia Mosque, Rustem Pasha Mosque, Selimiye Mosque, Aladdin Mosque, Miss Dr. Al-Azizia, Grand Mosque, here are the most famous mosques in detail and also miss Zaartha..aqro: Museums Turkey Islamic .. know the most famous museums Turkey

Read:The most beautiful beaches of Istanbul .. Each of them has its own charm .. Get to know it for the best summer vacation … 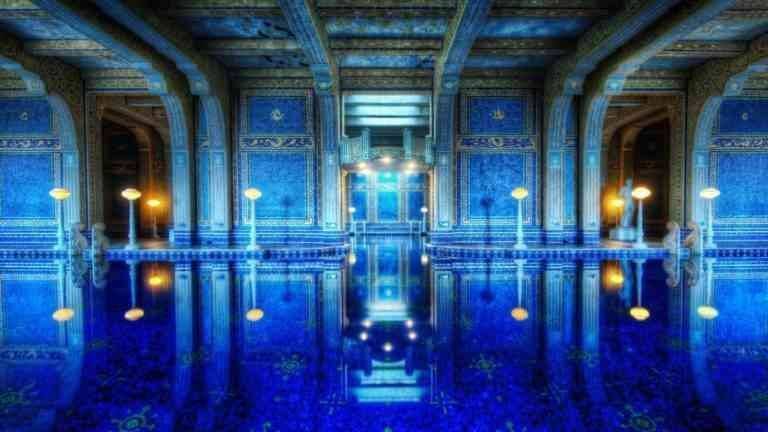 1- Sultan Ahmed Mosque: The Sultan Ahmed Mosque, or as it is known as the Blue Mosque, has the advantage of being the most famous historical religious landmark of the city of Istanbul. The magnificent interior and its dazzling architecture, due to its construction in 1616 AD, and we do not exaggerate by saying that it is one of the most important archaeological architectural masterpieces in the world and the most important mosques of Turkey Istanbul at all. 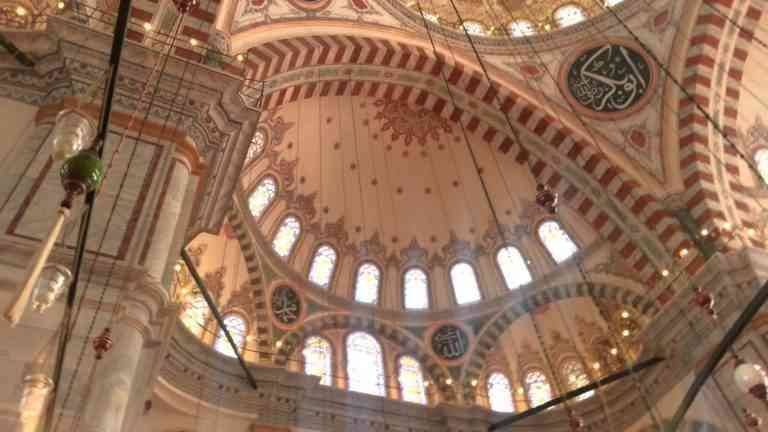 2- Al-Fateh Mosque Istanbul: It is one of the oldest and most beautiful museums in the city of Istanbul, and the best testimony to the elegance and splendor of Islamic architecture in ancient times, and its construction dates back to the eighth era between 1463 and 1470 AD, and the reason for its designation of this name is due to Sultan Muhammad Al-Fateh who ordered its construction as He opened the city of Constantinople in 1453 AD. With this architectural masterpiece, which is one of the most beautiful mosques in Turkey Istanbul, you can take the most beautiful memorial photos of the mosque building, which appears in the form of a square and has a central dome in the center surrounded by four small domes, and the pulpit of the mosque is characterized by preserving the Baroque character and adorning the most beautiful Motifs Linear and that fills all parts of the mosque and the oracle appended to it.

Read:How far is Izmir from Istanbul

The most important thing is its large area that accommodates more than 20 thousand worshipers, and it is the largest mosque in Ankara and is considered a village from the city of Istanbul, and is characterized by its design according to an architectural model of Ottoman very beautiful, and its construction was completed in 1987, and it occupies a great position and importance among tourists from inside and outside Turkey. Also: Cheap markets in Istanbul .. The 5 most popular markets sell goods at cheap prices 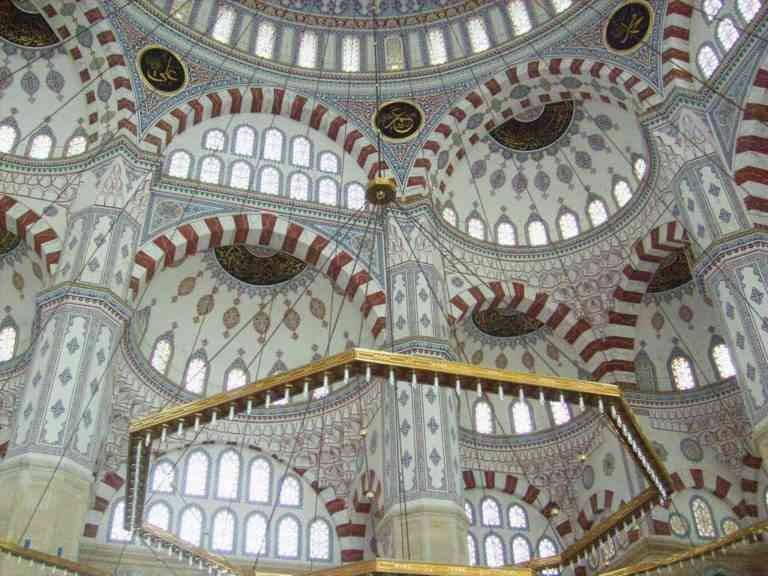 Central Mosque: The central mosque, “Sabanci”, is one of the largest mosques in the Middle East, located in southern Turkey in Adana, and it has 6 minarets elegantly and elegantly designed that resemble the minarets of the Sultan Ahmed Mosque in Istanbul. The mosque has a wonderful view of the quiet Sihan River and is surrounded by a garden Spacious, suitable for family outings. 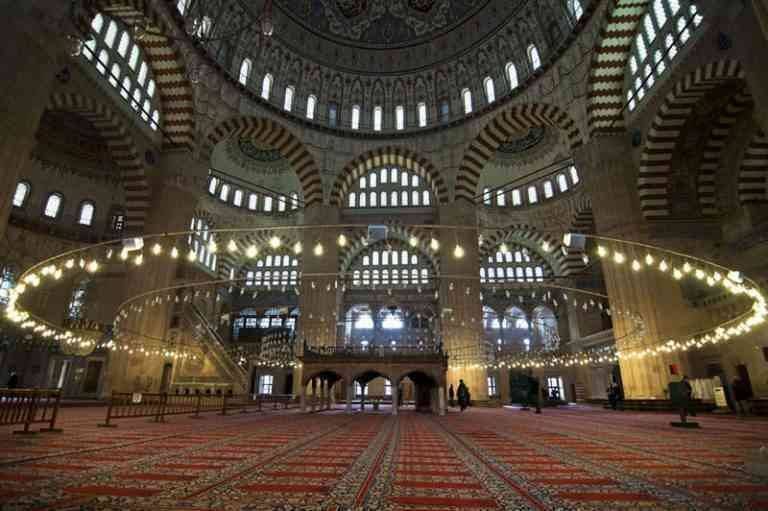 5- Selimiye Mosque: It can be considered the most beautiful mosque in Turkey, and is located inside the city of Edirne and indeed deserves the title of the most beautiful, it is an architectural masterpiece and its construction dates back to the year 1575, and it is the most attractive to tourists in the city and is very close to the city of Istanbul.

Read:Tourist program in Trabzon for 7 days 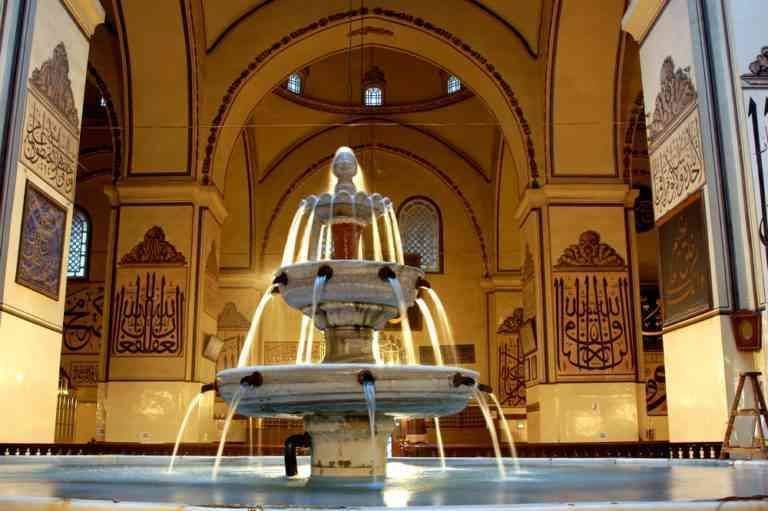 6- Grand Bursa Mosque: It is one of the oldest and most beautiful Turkish mosques, and its construction dates back to 1400, and it is the largest mosque in Bursa, and it includes about 20 dome, and it is decorated with a fountain inside it and called it “Al-Shazrawan” and the worshipers depend on it to perform ablution and is also close to Istanbul. 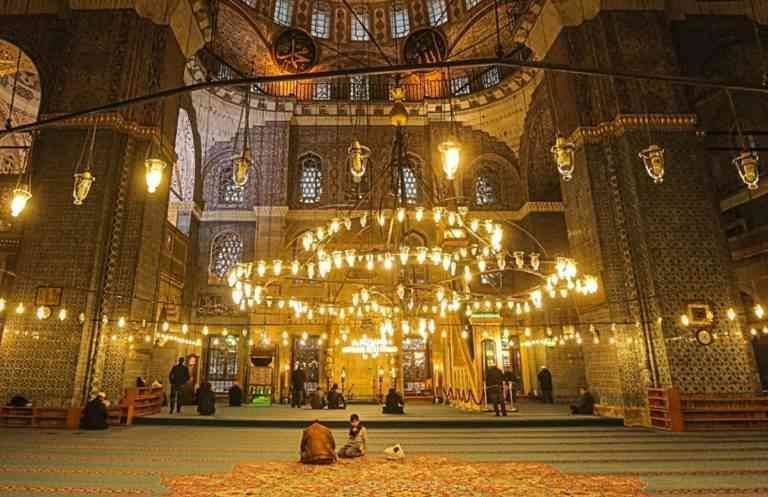 7- The new mosque “Yeni Jammeh”: it is distinguished for its construction according to the style of a high Ottoman architectural style. It is considered one of the most beautiful mosques decorated with masterpieces of architecture. It is located in the center of “Eminonu Square” in Istanbul, overlooking the Golden Horn, and its construction dates back to 1665. 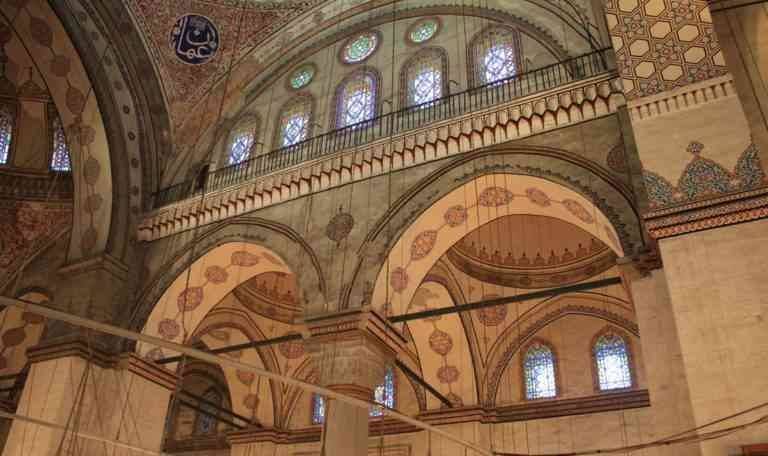 8- Bayezid Mosque: It was named after Sultan Bayezid II who ordered the construction of Bayezid Mosque in 1506, and the mosque is located in Beyazit Square in Istanbul, close to the Grand Bazaar, and it is characterized by its wonderful design and its inclusion of a huge dome and surrounded by a group of small domes. 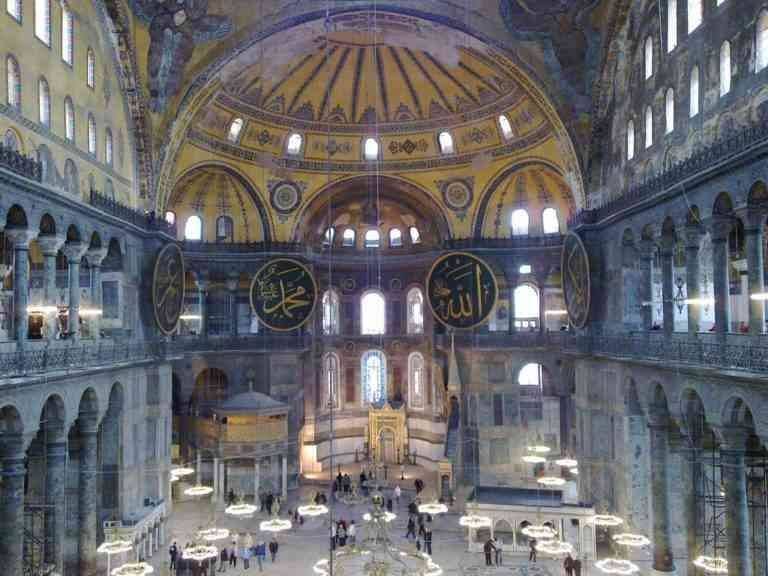 9 – Hagia Sophia Mosque: Its construction dates back to 537 BC, and it is strange that it was like an Eastern Orthodox cathedral, and it transformed between the years 1204 and 1261 into a Catholic cathedral, and then from 1453 to 1931 it was converted to an Ottoman mosque and in February of 1935 ended up being an Islamic museum, and this mosque is famous for its huge dome indicating the ancientity of Byzantine architecture.

It was named for its location in the Besiktas area of ​​Istanbul in the port of Ortakoy, with a beautiful view of the Bosphorus.

It is one of the most beautiful Ottoman mosques, it is located in the Fatih district of Istanbul, its construction dates back to the sixteenth century, and was in honor of Rustem Pasha, the husband of Sultan Suleiman’s daughter. Read also: Cheap and wonderful 3 and 4 star hotels in Istanbul 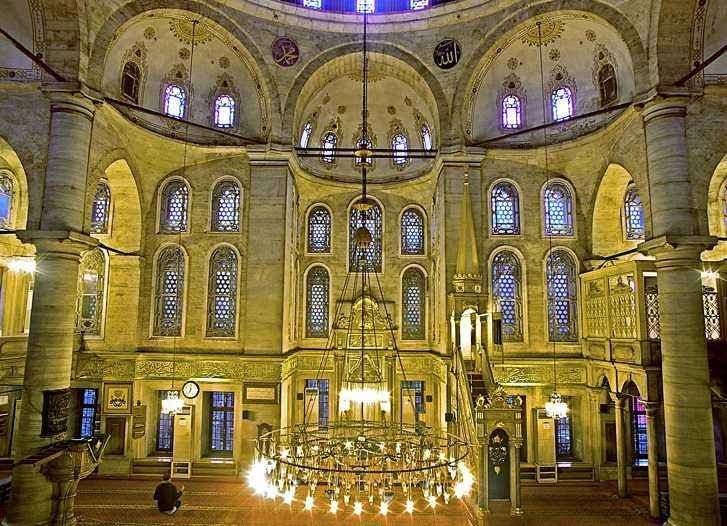 12- Mosque of Ayoub Sultan: Its construction dates back to the Ottomans, and is located in the European section of Istanbul in the region of Ayoub and was buried by the companion Abi Ayoub Al-Ansari, who was martyred in the battle of the conquest of Constantinople in 52 AH, and he used to receive students in the past as it includes a restaurant for the poor, a traditional hammam and a beautiful tree mediating The mosque, in addition to the most beautiful water fountains decorated with Islamic inscriptions and inscriptions.

“Shamlija” in Istanbul .. the largest mosque in Turkey .. with an area of ​​15 thousand square meters .. 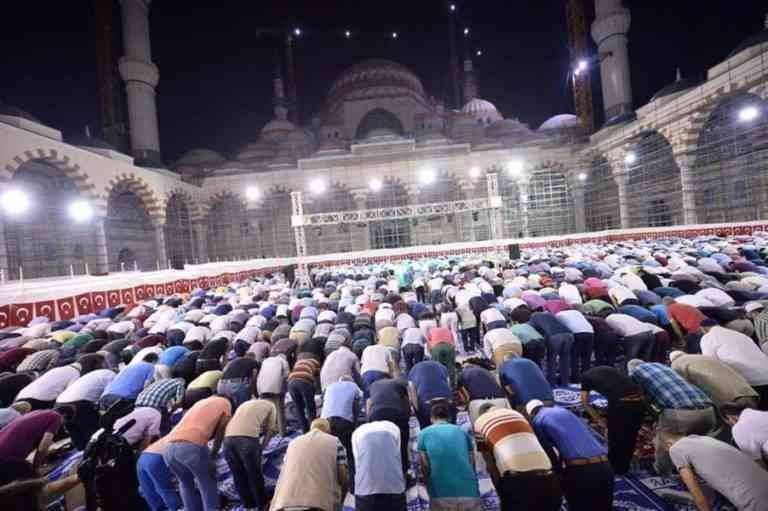 “Shamlija” in Istanbul .. the largest mosque in Turkey .. with an area of ​​15 thousand square meters.. Turkey includes the largest mosque in the world, and it was called the “Shamlija” mosque, which reaches its minarets to the sky of Istanbul at a height of 107 meters per minaret, which is higher than the minaret of Medina, They number six minarets, and this giant mosque was built on an area of ​​15 thousand square meters, and despite its stirring up a lot of controversy, it was built in the fastest time and to the fullest extent, and the mosque is located in the green “Shamliga” petal, in Istanbul, and the mosque can accommodate more Of the ninety thousand worshipers, and is distinguished by the ancient Islamic architectural style, and it is not limited to being a prayer square only, but it includes Huge clerks and a special lecture halls, a museum of Islamic arts, Turkish as well as some technical concerns.

The number of mosques in Istanbul … the Turkish city of “minarets” .. 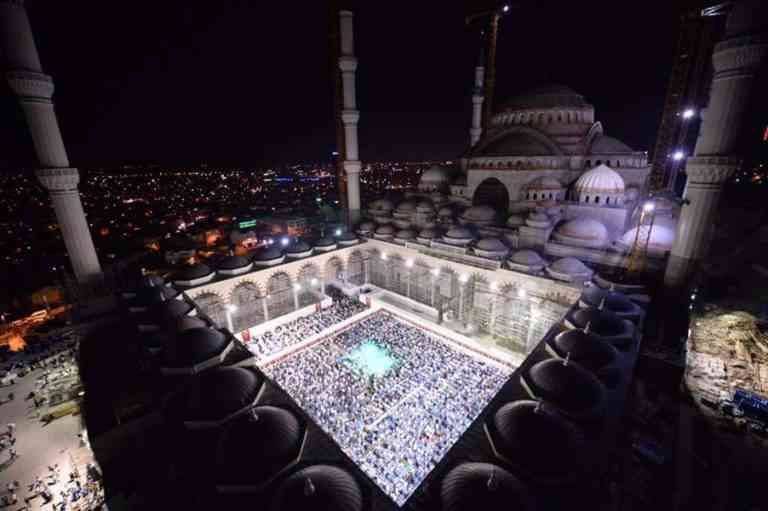 The costs of tourism in Paris .. the capital of “beauty” and your guide to spend a special trip at the lowest cost ..

Istanbul European Gardens .. Get to know her for the most beautiful vacation with your family …

The most important 10 questions and answers about traveling to Italy

The 6 best activities in the Najran Fountain in Saudi Arabia

Find out what Finland is famous for

The most beautiful beaches of Portugal

Report on the House of Roses, Shifa, in Taif