On National Day 88: get to know the most important Saudi regions registered in UNESCO

The most important Saudi regions registered in UNESCO

The authority works on registering heritage and archeological sites in the list of urban heritage within the program of the Custodian of the Two Holy Mosques to care for cultural heritage, which includes many programs and projects to develop these national heritage sites and to identify and preserve their history, which are five sites

Madain Saleh is the first site to be registered in the list of World Heritage sites. Madain Saleh, which was formerly known as the city of Al-Hijr, is located in the northwest of the Kingdom of Saudi Arabia, specifically in the Al-Ula governorate of the Madinah region. Among the Islamic monuments, which are represented in a number of castles and remains of the Hejaz railway.

The neighborhood is one of the most important political and geographical sites in Saudi Arabia since the first Saudi state, and the neighborhood is located in the Durya region northwest of Riyadh, as it is considered the capital of the Al Saud family, and the neighborhood was founded in the fifteenth century AD and characterized by buildings with the Najdi architectural approach that is unique in the middle of the peninsula In Arabia, the neighborhood includes ruins of many palaces, as well as a city built on the banks of the Diriyah Oasis. The Al-Turaif site, in the historic Diriyah district, was registered as a UNESCO World Heritage List in 2010

The sites of Jubbat, Rata and Al-Manjour (Al-Shuwaimis) in the region of Hail are considered to be one of the most important and largest archaeological sites in the Kingdom dating back more than 10 thousand years BC. Sunman in the city of Jubba and “Ratt and Al-Manjour” in Shuwaimis, where the “Jabal Umm Senman” area was a lake in the past and its inhabitants left many inscriptions about their lives, while “Ratt and Al-Manjour” were valleys and the inscriptions show drawings of humans and animals dating back ten thousand years.

Al-Ahsa Oasis is characterized by containing more than 3 million palm trees that produce the finest types of dates, in addition to the important geographical and historical location that is distinguished by them, and Al-Ahsa Oasis has become a list of the fifth Saudi human heritage site (UNESCO) registered by the General Authority for Tourism and National Heritage in the list, and that On the 29th of June 2020. 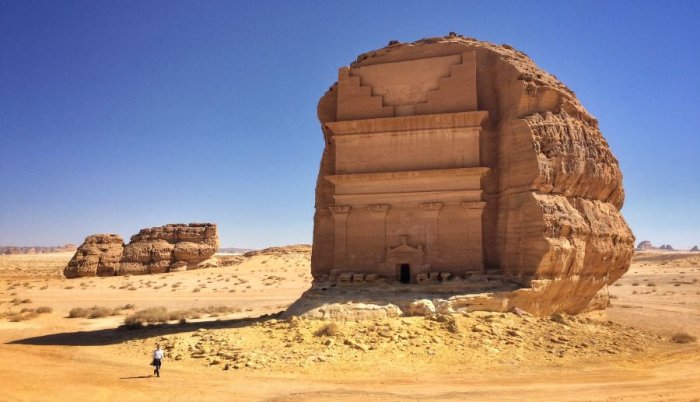 Under the patronage of “He” .. “Abu Dhabi International Boat Show” opens its doors to the global marine entertainment community