Popular cuisine popular in Palestine and the best 10 Palestinian cuisine

The kitchen in Palestine is distinguished by the fact that it contains a luxurious collection of traditional and modern cuisine, which makes it has a distinctive identity that highlights it between the Middle East and all over the world, and every Palestinian governorate differs from other provinces in its own methods and cooking secrets, but remains The quality of food in Palestine is high throughout, no matter the recipes differ. Here are some of the popular dishes in Palestine and the top 10 Palestinian dishes.

– Popular folk food in Palestine and the top 10 Palestinian cuisine:

Kubba is known in Palestine as the “cousin of falafel” and some call it meatballs. Kubba was originally a Syrian milky food, but it was famous in the Levant and its eating became national in Lebanon and Palestine as well. Kibbeh consists of a group of various meats such as beef and Lamb meat, to which Arabic spices, onions and ground wheat are added. Kibbeh is formed in small balls, cooked in oil or served grilled, and sometimes some people prefer it as it is without cooking. The kibbeh in Nablus may differ from the rest of Palestine as it is wrapped from the outside with a layer Of wheat. Kibbeh is served with yogurt and lemon, and it is considered by some regions in Palestine as a beja appetizer The main meal. 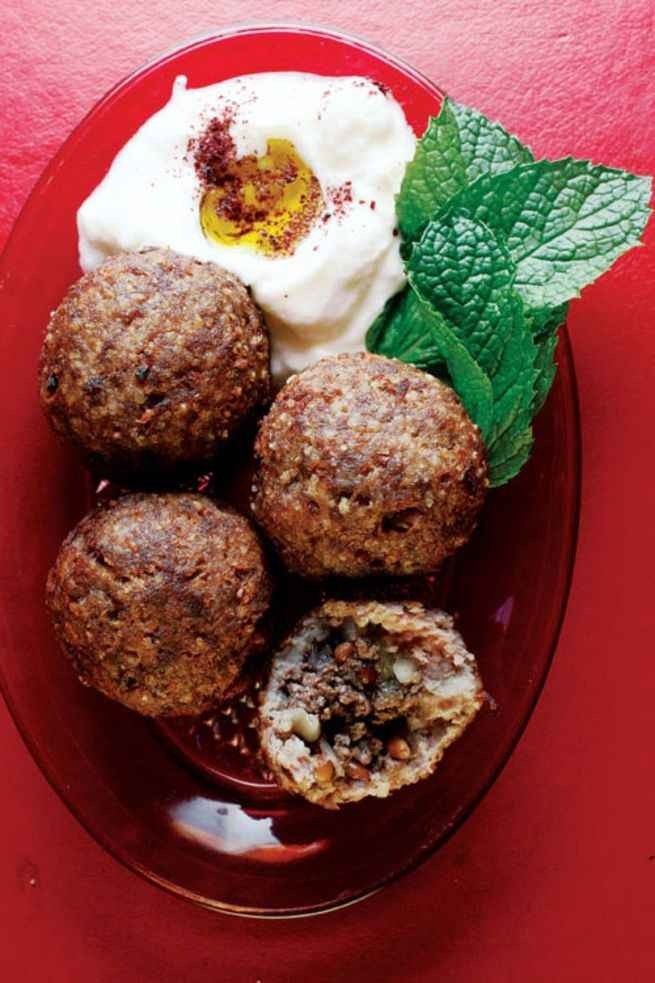 One of the popular dishes in Palestine

Al-Manqoush is considered a popular breakfast meal all over Palestine, and some call it popular pizza. The Al-Manqoush consists of a flat dough, put salt cheese or thyme with olive oil, and is baked in the Palestinian oven, oven. Some bakeries make the manqoush with unconventional additions such as meat Or tuna, but remains the largest demand for traditional Man’oushe. The Man’oucheh is characterized by being cheap and delicious, as well as being available in all parts of Palestine through small bread stalls or large bakeries. 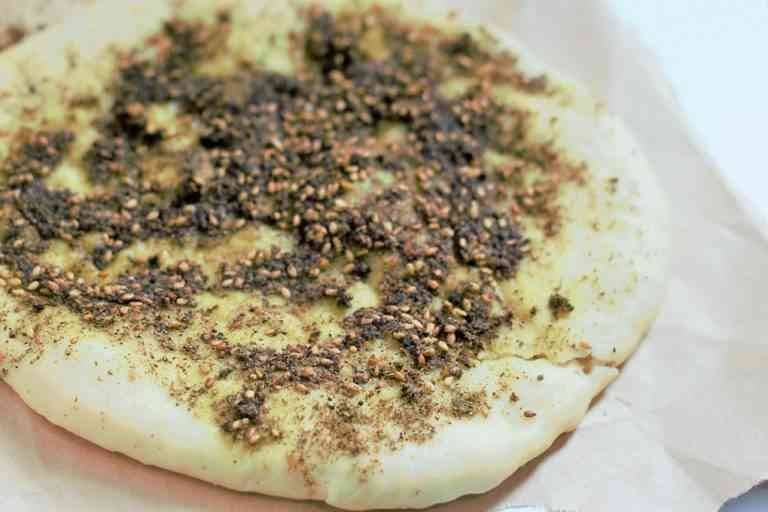 If you want a snack in the middle of your day, you should go to sweet corn carts in Palestine. Sweet corn carts are spread all over Palestine, and all the time throughout the day, making it a first choice for employees at rest times. Sweet sweet corn is served hot in cups, And add to it butter and flavored spices. Sweet corn can be served as one piece roasted or boiled, as preferred by some. Some prefer eating sweet corn as entertainment during tourist trips, or going out for walks. Sweet corn is characterized by being a saturated, and inexpensive meal, which makes it popular with it Severe at all times. 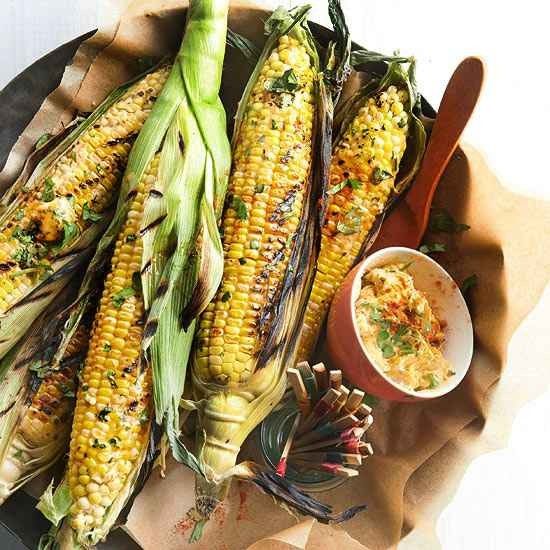 The cakes are the first favorite breakfast for the Palestinians, who prefer walking and walking in the morning. Popular Palestinian cakes come in the form of round or rectangular baked goods, plus olive oil and thyme. Cakes are often consumed with tea as a traditional and holy breakfast in the West Bank. Cakes are often consumed on public holidays and holidays, due to the large number of people going out on the streets and hiking. 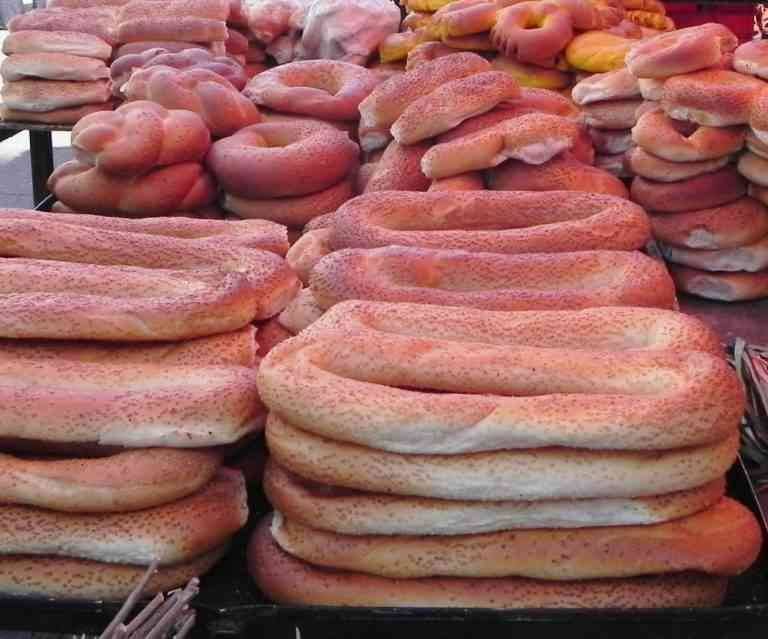 Falafel in the Palestinian way is a popular tourist food in all parts of the world, and tourists cannot stop eating it after tasting it for the first time. Palestinian falafel is also distinguished by being a vegetarian food that does not contain meat, it consists of chickpeas and leafy vegetables such as parsley in addition to spices. In sandwiches with the addition of tahini salad, and other additions are available from the authorities or pickles as desired. Falafel is considered a relatively cheap food, and it is also available in all parts and streets of Palestine. 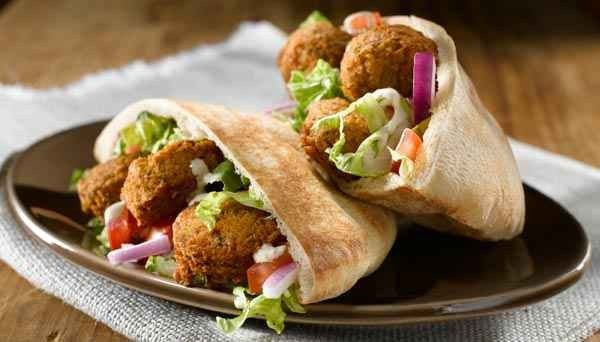 The plate is one of the popular folk dishes in Palestine, which is classified as a category of pies. The plate is famous for its multiple flavors due to the different filling inside and its diversity among spinach, chicken meat, vegetables and cheese. The plate is served with yogurt milk, and it is considered a light lunch. In Palestine, the plate is added in some restaurants as a delicious appetizer next to the main meal. Some people prefer eating the plate as a breakfast or a snack between the main meals with tea, often a cheese plate. 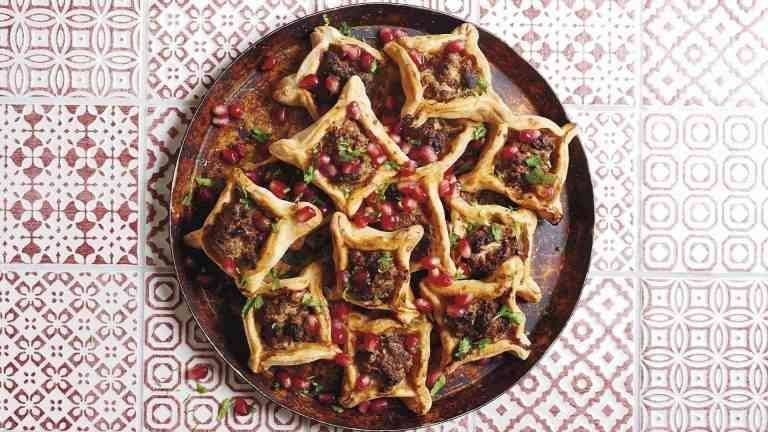 Qatayef is one of the popular dishes popular in Palestine, and in some areas it is called Qatif. The Qatayef dessert is made from dough of Qatayef stuffed with sweet cheese, or nuts and sugar, and is served fried with sweet syrup. Qatayef is often spread all over Palestine during Ramadan Blessed, and Muslims prefer to break their fast and break the fast there. You can get katayf outside the holy month in some areas of Palestine, such as Nazareth and Bethlehem, where there are places designated to serve them throughout the year. 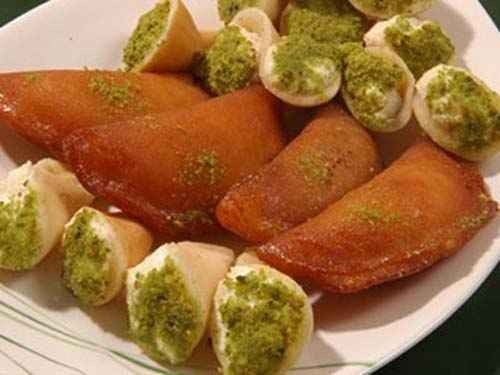 The Maqlouba is one of the best-known popular dishes in Palestine, and one of the most popular dishes among residents and tourists. The Maqlouba consists of several layers, a layer of vegetables, a layer of rice, and another of meat or chicken. Presenting her heart upside down, so that rice becomes in the bottom layer, then vegetables and meat. Usually served upside down with yogurt, but some prefer eating it with curry sauce. Upside down is one of the foods that are presented in wedding parties and occasions, and it is not preferred to serve it on weddings or Luxurious parties. 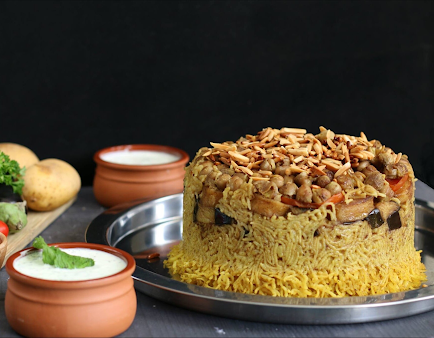 Chicken and Freeke Salad is one of the best popular appetizers in Palestine. Chicken and Freeke Salad relies on grains like frick and bulgur as an essential component of its components, in addition to chicken and vegetables. The salad is made by cooking chicken and adding it to vegetables, then roasting the grains and mixing them with chicken and Vegetables well. Season the chicken and frica salad with olive oil and lemon as essential elements in its taste. Some restaurants offer chicken and frica salad as a separate meal on the lunch or dinner menu, as it is a full and nutritious meal with nutrients. Vegetarian people can dispense with adding chicken to enjoy the salad From h Bob and vegetables are useful and tasty. 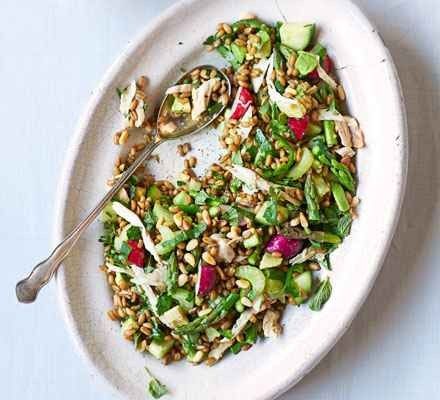 The best popular dishes in Palestine from sweets

The Nablusi Konafa is the best and most famous Palestinian dessert ever, and it is called the Nablusi Konafa for its start in the city of Nablus. The Nablus Konafa is prepared from the kunafa bristles, or coarse semolina, and they are mixed with butter, added to them cheese, and cooked over a quiet fire Served with sweet drink and pistachios, which gives it a distinctive taste with the melting of cheese, it becomes a mixture of sweet and relatively salty. Nabulsi Konafa is spread all over Palestine and its streets, and it is always a strong demand from citizens and tourists. 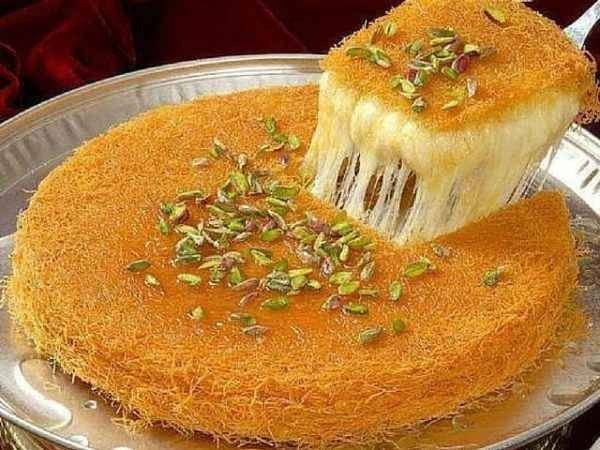 Famous food in Sudan .. Learn about the most famous Sudanese foods and sweets

Tourism in the Georgian city of Mtskheta: 5 activities and attractions