Ramadan atmosphere around the world

In pictures, get to know the atmosphere of Ramadan around the world and the different customs and traditions, where all the funful people in the world celebrate the holy month of Ramadan, the holy month of Ramadan, except that the traditions and customs to receive and celebrate the month of Ramadan differ from one country to another, but the Muslims of the whole world gather them with a warm welcome this month in an atmosphere of joy. The joy and family members gathering at the iftar table, and the month of Ramadan has its own rituals that his fans are keen to practice, such as making a lot of good deeds, giving alms and making lots of acts of worship, as people frequently visit mosques and read the Qur’an, as well as foods, drinks and traditions that distinguish all A Muslim country celebrates this blessed month, and here is the atmosphere for Muslims celebrating this blessed month on the website of Arab travelers.

Ramadan atmosphere around the world

The rituals that Muslims live to celebrate the month of Ramadan differ, as they differ from one people to another, but the link between them is radiating joy and joy this month, especially since Muslims are waiting for it in full swing. Ramadan is not only a religious season, but rather it gives Muslim societies the meanings of solidarity, unity and cohesion And it breathes calm, reassurance and peace of mind. 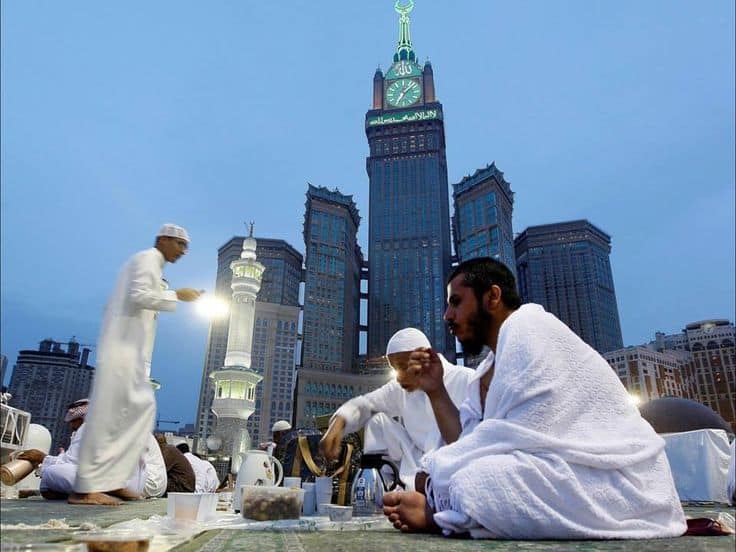 Ramadan in the Kingdom of Saudi Arabia has a special taste, especially in the city of Mecca and Medina, so it has special spirituals and rituals that are unparalleled to increase the number of pilgrims and visitors to the House of God, except that in general the people of the Kingdom celebrate certain rituals, which are breakfast on water, wet and dates, and this is what they call jaws of saliva And then they perform the Maghrib prayer, and after that the breakfast is consumed, and the bean dish is always topped with olive oil or municipal butter breakfast tables in Saudi Arabia, as well as dough stuffed with meat and Tamesmus bread and samosa and soup, and then they are eating the distinctive red tea they have, and then launching for the evening prayer And Tarawih, and one of the traditions common to the Saudis is to allocate breakfast every day in the month of Ramadan at one of the family members periodically, and this is considered to have a traditional method followed by the Saudis for rapprochement between the parents during this holy month. 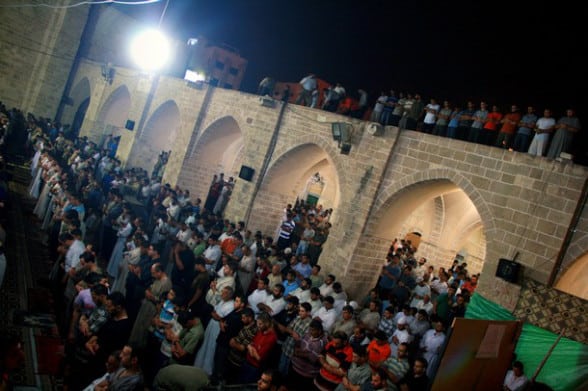 Palestine has its special characteristic in the month of Ramadan, which has its rituals that are practiced whatever the events and circumstances, so that the voices of prayers and supplications in mosques rise, and the visits between families, friends and families, and the exit of children carrying their lanterns while they repeat some traditional songs. Ramadan The head of the family or the person on whose behalf he visits all members of the family, presenting them with gifts on the occasion of the advent of Ramadan. As for the Palestinian table during this month, it includes the delicious and delicious food items alongside pickles, soups and spices. Dates and syrup are considered. Carob, moon, licorice, and hibiscus are essential drinks on Palestinian tables in Ramadan. As for sweets, all types, types, mushrooms, and crabs are the desserts that are loved by the Palestinians. 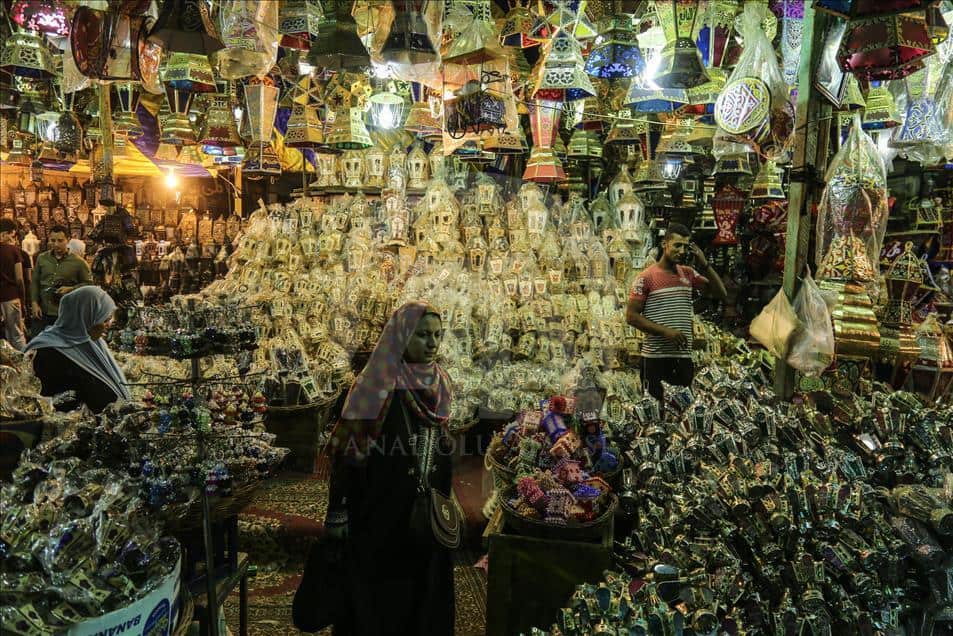 The month of Ramadan in Egypt has its own glow, as the Egyptians are keen in Ramadan since the announcement of seeing Ramadan, so the Egyptian streets begin declaring their joy and joy in this month, so the decorations obscure the streets sky in Egypt and hang luminescent lanterns in front of the shops and porches of houses to appear as stars falling from the sky on the ground, in addition to the smile Which Egyptians draw on their faces, exchanging warm and congratulating peace, and Ramadan in Egypt has its own rituals, where sellers of inherited Ramadan drinks such as sobia, dates, and carob and licorice are spread, as well as Almshrati and family visits, as for the table in Ramadan, it is filled with Varieties and types of Egyptian delicacies varied alongside Ramadan drinks. As for the streets of Egypt during this month, they are filled with the tables of the Most Gracious to break the diaspora and the needy. After breakfast, celebrations, carnivals, Tarawih prayers and remembrance tables begin. 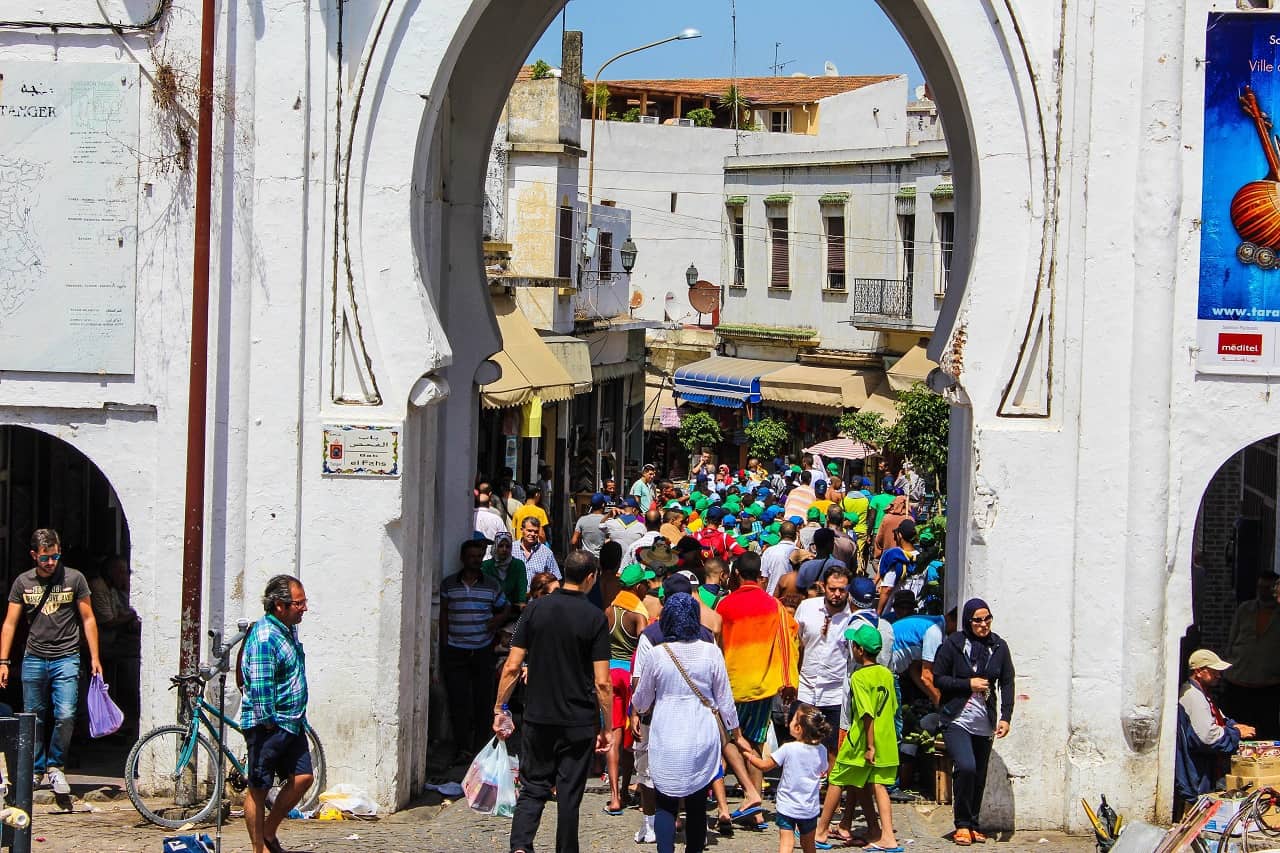 The Arab Maghreb countries have their rituals full of this month, as they are among the Islamic peoples who are fond of this holy month, so the voices of Sufi music, which are the most important features of Moroccans, are raised. Spiritual music, in which Sufi bands celebrate their evening in the mosques of cities and villages, and in it are presented various styles of spiritual music that enhance the cultural scene in Tunisia.
As for the state of Morocco, the Moroccan people are keen on exchanging congratulations this month, chanting the phrase “Awsaf al-Mabrouka,” and they welcome the coming of this month by listening to the Grand Mufti on the television, after which they start beating their drums on the streets. Residents and visitors to sell such meals.
While in Algeria, children soar in the public squares and streets while they hold each other’s hand to perform a folk dance, chanting songs of welcoming Ramadan, and before breakfast time, the trumpet is trumpet towards the population gatherings to inform them that breakfast is approaching. As for breakfast, they start with dates and milk together, then eat calories and teem with the table Algerian meat dishes and vegetables, and then the Tarawih prayer. 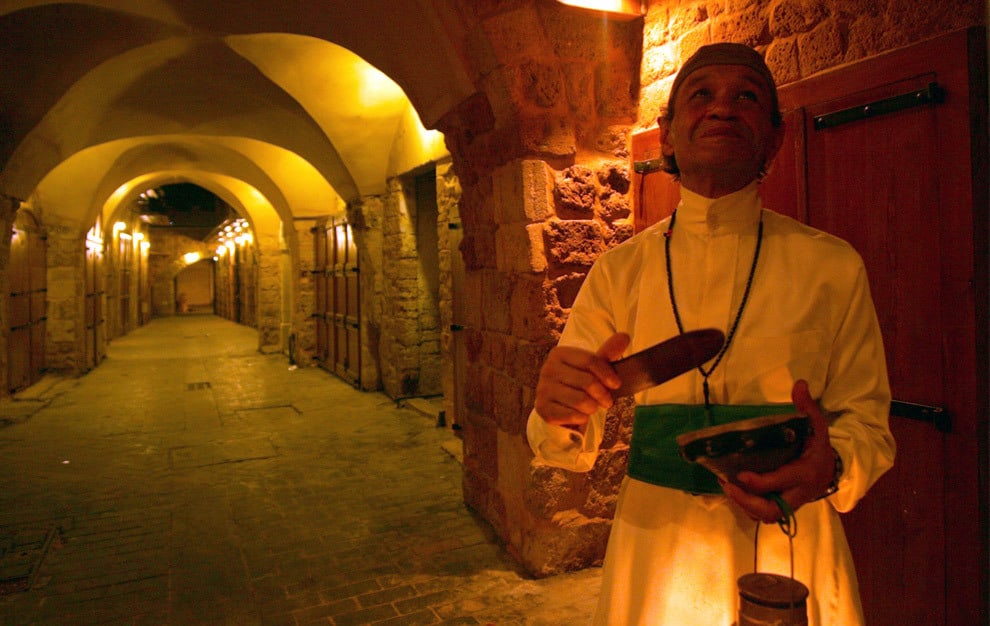 Despite the various religious sects in Lebanon, the month of Ramadan has its special status in their hearts, where all sects meet side by side with the advent of Ramadan, and among the most famous rituals they have in Lebanon is what is known as the Sabianah of Ramadan, which is an old tradition that they still follow until now, where they take a stroll on the beach And eating drinks, food and certain types of sweets on the last day of the month of Sha`ban. As for the Lebanese table in Ramadan, it is distinguished by offering soups of all kinds and types, chickpeas, tahini, fattoush, fried kibbeh, and molokhia, paper beside chicken, and during the night hours, my magicians roam the streets to wake people up. 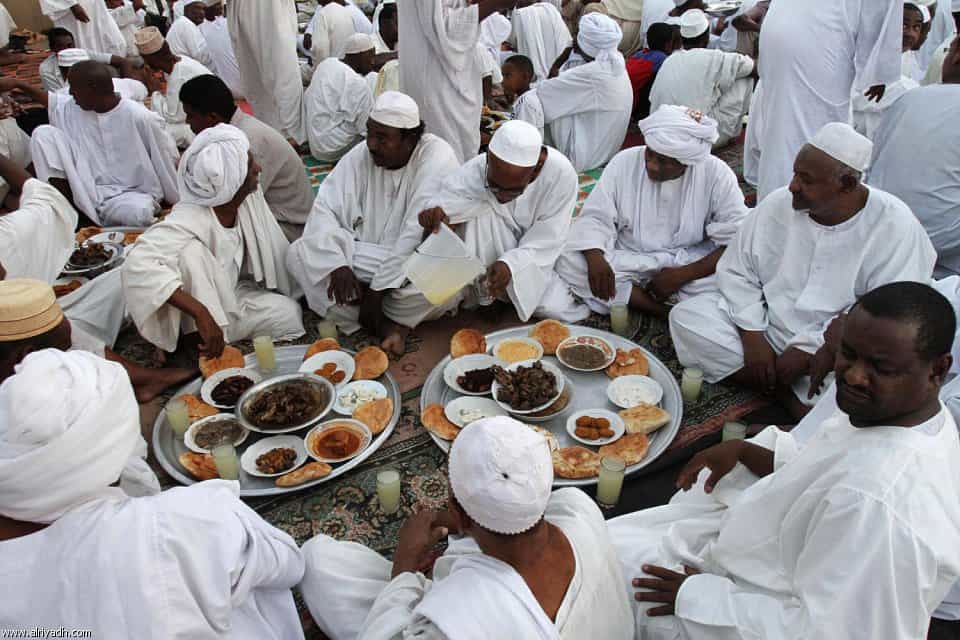 Sudan is the only country to receive Ramadan with a military wedding, led by a number of Sufi men, then young people and citizens, and circling the streets of cities to announce the beginning of Ramadan. Mosques illuminate their colorful lights on fences and minarets. As for the Sudanese table, it is the best example of simplicity and symbolism, so it is a rug made From palm fronds in the shape of a rectangle, the fasting people sit in front of each other and share food, and exchange conversations during iftar. As for the famous food items they have in Ramadan, they are dates, Sudanese nights, and a cup of lemon juice in case of high temperature, while in winter Eat soups, and are considered Aloueckh salts and yoghurt and porridge months dishes Ramadan, characterized by the streets in Sudan during Ramadan, the establishment of collective breakfast. 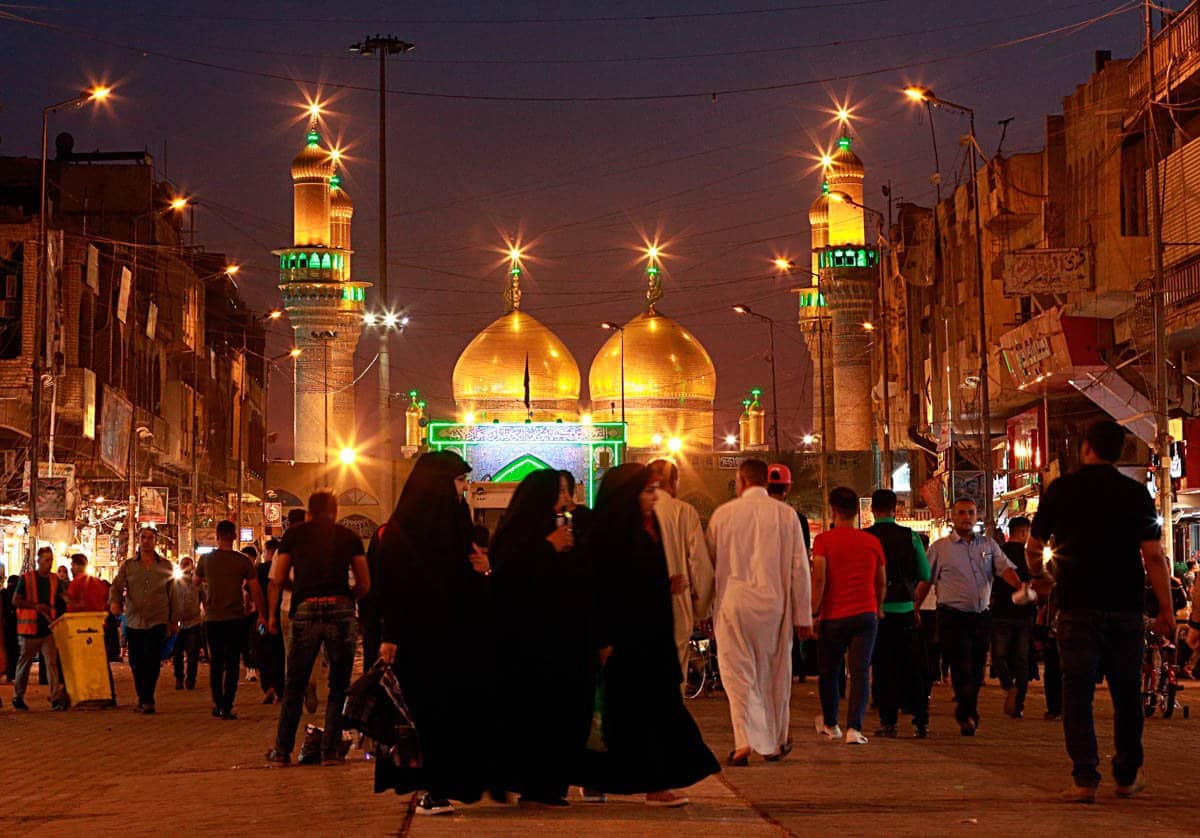 Iraqis follow a number of rituals to celebrate Ramadan, which is shopping from the Shorja market before the time for Iftar, and during breakfast all family members gather at the table to savor delicious Iraqi delicacies such as cardamom, Iraqi mush, and Hanina al-Baghdadi next to the kebbeh of Aleppo and Mahashi, and Iraqi sweets in particular, dumplings and baklava. 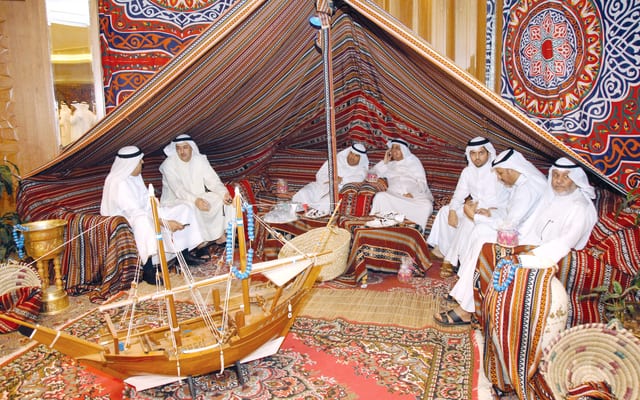 Children celebrate the public squares and streets, and the people of Kuwait spend most of the time in mosques where i’tikaaf and night prayers are, and one of their most prominent rituals in Ramadan is the holding of festivals and banquets throughout Ramadan, and the Kuwaiti mash dish is the main dish on the Kuwaiti table throughout the month of Ramadan and the food of impregnation. 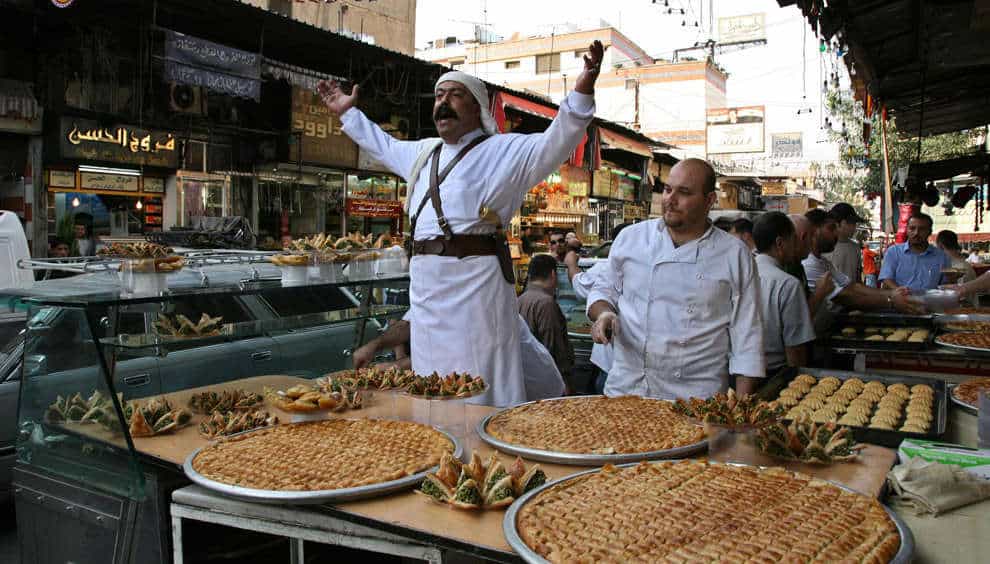 The Syrian people decorate the façades of houses, mosques light up their lights and stimulate movement in the streets, while markets and shops do not close their doors until late hours, and all members of the family meet while eating the fence and breakfast and the neighbors and relatives look to the meals, visits and determination, and after the Maghrib call, milk and dates are the address of their breakfast, And after that, the Maghrib prayer will be performed, and then he will eat the various delicious Syrian foods, and the people of Syria will be keen during this month to increase their obedience and wombs. 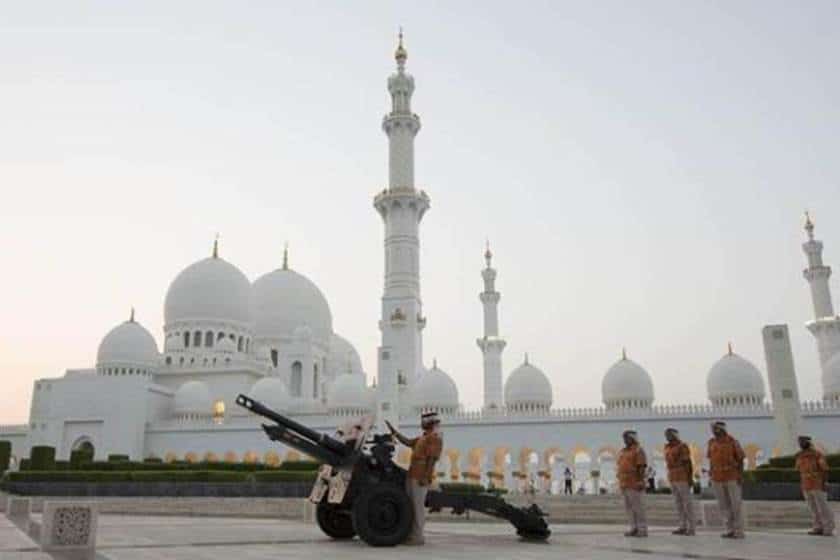 After the advent of Ramadan, the Iftar tables are spread in the Emirates, so the residents of the neighborhood gather to eat breakfast together, where the women of the neighborhood prepare food together and everyone participates according to his ability, after which Tarawih prayers and visits to relatives and a lot of obedience and good words, then the magic comes to alert people to the dates of the Suhoor meal, and during this month The councils known as Diwaniyah and Meles are famous. 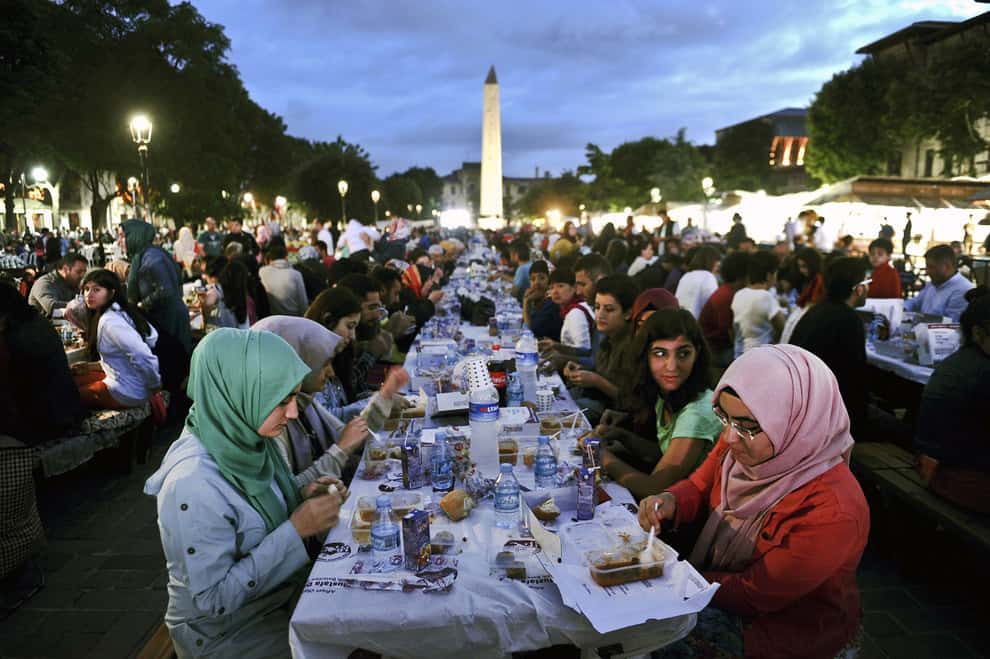 Muslims in these countries strive to adhere to the Ramadan traditions as much as they can, where they exchange congratulations and go to mosques and Islamic centers to meet with them and prepare prayer and worship programs and perform Tarawih, distribute brochures and booklets, and often Muslim neighbors and relatives are keen to meet on one Ramadan table, as if breakfast every day is In a certain house, as an attempt to revive the family rituals they miss in their country. 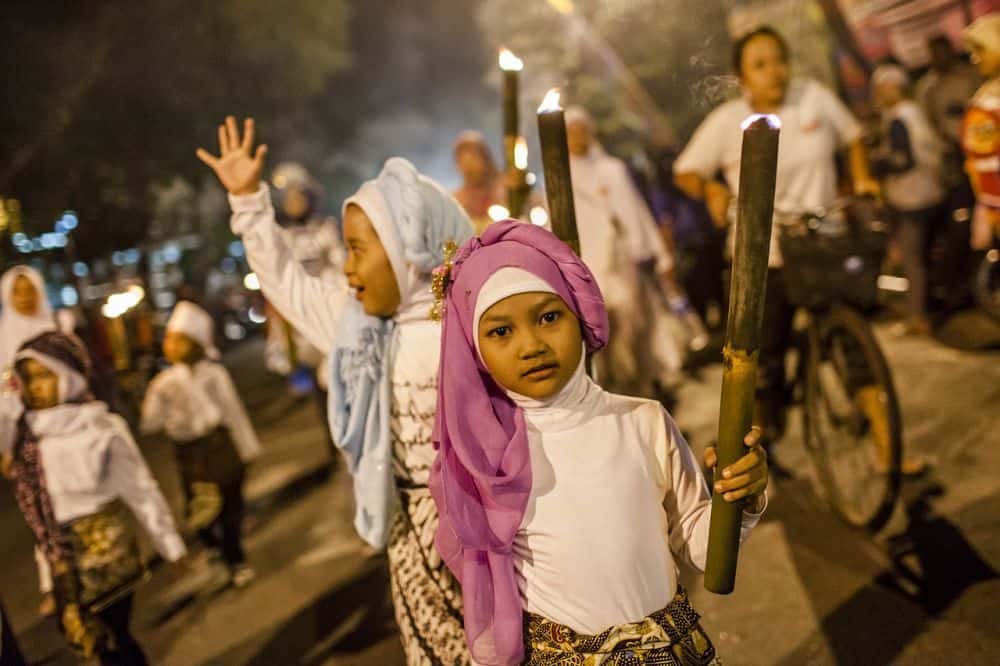 It is considered one of the largest Islamic countries in terms of the number of Muslims who are in it. With the advent of Ramadan, children in all cities carry out the torches, so they are happy with the advent of Ramadan. Pumping on drums is considered one of the Ramadan rituals of the Indonesians, and they spend most of their time in large male episodes and study the Qur’an, and the people Indonesian before breakfast, transporting food to mosques and sitting next to each other for breakfast. 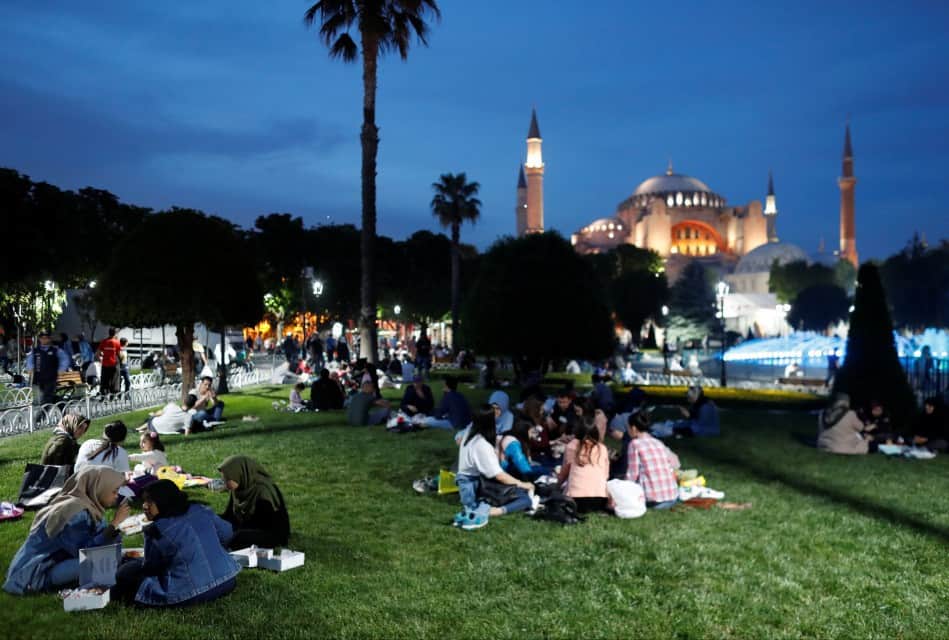 The Turks receive the month of Ramadan with zagharid, and they spread perfumes on the doorstep after hearing the vision, and the streets of Turkey are filled with Rahman tables and mass breakfast parties, and the Turks are keen to have the bread available on the Ramadan table and sausage, pastrami and soup as well as fresh pancakes and delicious Turkish dishes and varied sweets such as kunafa And Ashura, Sutlag and Baklava, in addition to the activity of movement in the streets, the people going to pray Taraweeh and their eagerness to do it, and the passage of Al-Masrati time at Suhoor to alert people. 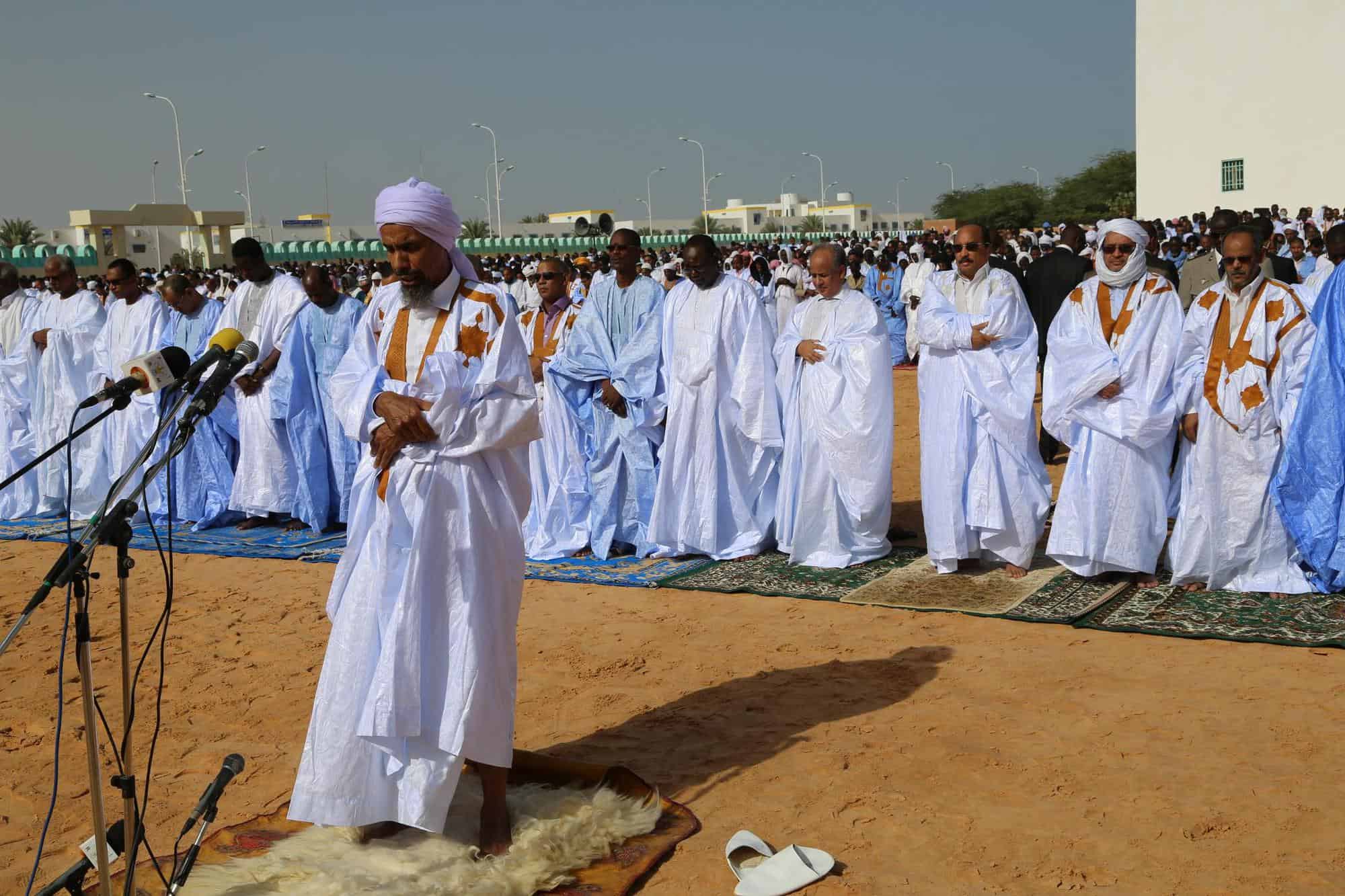 They celebrate Ramadan on their way, as men shave their heads or thin hair.

They play a strange game, which is the boiled egg war, whereby the contestant grabs a boiled egg in his hand to hit the egg that the competitor has in his hand. Once, a wedding ceremony for a fasting child for the first time, as the child wears clothes similar to the clothes of the adult groom and decorates his head with a golden cap.

The most beautiful tourist facilities in Tetouan, Morocco

Tourism in South Korea with pictures