The airport is located in the resort area overlooking the Red Sea coast, Sharm El Sheikh, with a total capacity of 25311480 square meters, which accommodates the parking of 46 aircraft at the same moment, with 3 huge passenger lounges that include many services and entertainment facilities and modern electronic devices to complete the travel procedures and procedures quickly and easily.

To find out more about the location of Sharm El Sheikh International Airport and the most important services it provides for travelers through it, as well as the best and closest hotels in Sharm El Sheikh, you can follow the article.

Location of Sharm El Sheikh International Airport on the map

Sharm El Sheikh Airport is located on the highway known as Al Salam Street, which is the street leading to the entertainment areas and tourist resorts overlooking the Red Sea coast, 18 km northeast of Sharm El Sheikh, South Sinai.

To learn more details about the location of Sharm El-Sheikh International Airport on the map, you can see the following form through Google Maps:

Transportation to and from Sharm El Sheikh Airport

Sharm El-Sheikh International Airport provides a good and easy network for both departing and expatriate travelers to move between it and the various accommodations in the city, in addition to safe parking, and perhaps one of the best and most important means of transportation available to and from Sharm El Sheikh Airport:

If you are a resident of Sharm El-Sheikh or the cities near it in the South Sinai Governorate, you can go to the airport with your own car in only 7-15 minutes by taking the main Salam Street towards the northeast of the city where you can see the airport buildings clearly on your way, with access to its gate after 18 km From driving, Sharm El Sheikh International Airport also provides secure parking in front of Terminal 1, where you can park your car for a short or long period until you return to the city again.

The airport provides an integrated parking lot for luxury taxis that operate around the clock next to Terminal 1, and you can also book the car in advance by phone by calling 122 as the date of arrival and the fees determined for transfer to the hotel, the intended resort or the residential neighborhood of the city are determined, knowing The fare fee includes luggage.

Rented cars are one of the best means of transportation during your vacation in Sharm El Sheikh and the most comfortable and private one starting from your arrival point at the airport. The city provides offices and branches for several prominent international car rental companies inside and outside the airport, most notably: Europe Car, Avis, Sixt, Hertz.

One of the best mobile phone applications to obtain a transportation means that connects you wherever you are and goes with you wherever you want, with advance information and fees that are not negotiable, such as traditional taxis.

Sharm El Sheikh Airport provides mini private buses next to Terminal 1 for passenger transport only without luggage, and the bus stops upon the request of the passenger upon his arrival at his point of departure.

Sharm El Sheikh Airport and the surrounding areas host offices and branches of dozens of local and international car rental agencies that have received praise and recommendation from customers during their visit to the city. You can communicate and book a car and get the best offers and prices through the website Rental cars Famous by determining the date and place of receipt of the car and its re-delivery and the identification of the car specifications and the duration of the rental and its value.

Perhaps one of the best car rental companies in or near Sharm El Sheikh Airport:

SixtOne of the leading international car rental companies that owns several branches in Egypt and the Middle East, one in Sharm El Sheikh with a rating of 7: 8/10 from previous clients, thanks to the cleanliness of the car, the staff, commitment to the delivery date of the car, and you can view the most important details through Their website from Here

AvisOne of the most famous car rental companies around the world, including the Middle East. The American company has a local office in Sharm El Sheikh. You can contact and book through the website of its main branch by visiting the link by clicking Here

ThriftyIt is one of the prominent car rental companies at the local level in the United States, and globally in Europe, Asia and the Middle East, which has a branch inside Sharm El Sheikh Airport, and you can view more details via the link by clicking Here

Sharm El Sheikh International Airport includes 3 passenger terminals, the most recent of which dates back to the year 2012, and can move between them and enjoy its services via buses provided by Sharm El Sheikh Airport for its travelers. Each of the airport lounges serves specific and different categories of departing or arriving travelers as follows:

It consists of two floors with a total area of ​​10330 square meters to serve the international travelers or departures on international flights at an average rate of 1800 passengers / hour. The hall includes 40 counters to receive bags and bank branches and is located next to the bus station and taxi or private cars.

It works to serve international travelers or departures on domestic flights within the Arab Republic of Egypt with a total area of ​​44 thousand square meters at an average rate of 2500 passengers / hour, in addition to 20 counters to receive bags and a number of high-quality entertainment facilities such as restaurants and cafes, including the famous fast food restaurants, phones to conduct International calls, shopping areas and car rental offices, VIP halls and administrative offices.

The most important airlines in Sharm El Sheikh Airport

Egypt Air Company: It is the official national carrier of the Arab Republic of Egypt, and it directs its flights to 80 destinations around the world.

EasyJet: the UK’s largest private airlines in the field of low-cost aviation, directs flights to 106 destinations in the United Kingdom, North Africa and Europe.

Jazeera Airways: It is a Kuwaiti private airline that launches low-cost flights to 18 destinations in the Middle East, Europe, South and West Asia.

Saudi Arabian Airlines: It is the official air carrier of the Kingdom of Saudi Arabia and directs its flights to more than 95 destinations in Asia, Africa, Europe and North America with the Middle East region.

Air Berlin: It is the second largest German airline that directs low-cost flights to 123 destinations in Europe and North Africa, on the Mediterranean coast and the Canary Islands.

Transavia Airlines France: It is a new low-cost airline that belongs to Air France administratively, while Transavia Netherlands is in its logo, operation and website, and it directs its flights to 56 destinations in Europe, Asia and Africa.

Aero Flute Company: It is the official air carrier of Russia and the countries of the former Soviet Union and one of the oldest and largest airlines in the world, directing flights to more than 95 destinations in 49 countries around the world.

Austrian Airlines: It is the official air carrier of the State of Austria, yet it follows German Lufthansa Airlines, and it directs its flights to 130 destinations in North America, Europe, Asia and Africa.

Edelweiss Airlines: It is a Swiss-owned airline that flies to 65 destinations around the world.

Sharm El Sheikh International Airport provides regular internal and external trips to Cairo and several major cities in the Middle East and Europe, in addition to joint and seasonal trips from East and West Europe and the group of Scandinavia and Baltic countries and the countries of the former Soviet Union, and perhaps the most important and most prominent destinations from / to Sharm Airport Sheikh:

Trips from Sharm El Sheikh to Moscow and vice versa

Trips from Sharm El Sheikh to London and back

Trips from Sharm El Sheikh to Manchester and vice versa

• Sharm El-Sheikh airport obliges its international travelers to be present three hours to one hour before their flight as a maximum to register their names, complete their travel procedures and give them a boarding pass through the airport check-in ports for different destinations.

• International travelers, whether before they leave the airport halls to reach the departing plane or during their return and before entering the Egyptian territory, are subject to careful customs supervision and examination, mandatory control of the passport, the extent of its validity, the seals of departure and the arrival of the destination country on it, please cooperate with airport staff to complete a faster and easier procedure.

• In the event that assistance services are needed, as is the case with sick or elderly travelers or people with special needs, coordination must first occur with the airline or airport at least 48 hours before the flight date to provide the required assistance.

Finally, we must adhere to the rules of carrying the luggage imposed by the airline that manages the flight and not to carry luggage that would affect the safety and safety of passengers such as weapons and sharp machines, batteries of batteries and additional computers and dry ice and liquids in ampoules of more than 100 mm wrapped in a transparent plastic cover that can be opened and closed, with commitment Also not to smoke in places other than those authorized.

Things you can do inside Sharm El Sheikh Airport

During your stay at Sharm El-Sheikh International Airport, you can do some entertaining activities until the flight, or immediately upon your arrival and before you leave the airport grounds, such as:

The airport provides lounges for arriving or departing passengers, in addition to lounges for senior visitors, which include comfortable seats and recreational facilities where you can relax and unwind until the completion of the procedures or the date of travel.

The airport provides paid phones in the passenger lounges for international communication with friends and family, in addition to free wireless internet (Wi-Fi) to browse the internet and social networks, follow the news, entertainment content or start business.

The passenger halls and the customs area include several restaurants and cafes that offer a variety of varieties of traditional Egyptian cuisine and European and international foods, including fast food, where you can satisfy your hunger before the trip with a delicious selection of your favorite or favorite drink.

The passenger lounges at Sharm El-Sheikh Airport include a large number of valuable Egyptian souvenirs and bazaars with retail stores, in addition to the duty-free zone at the Customs Department, which offers duty-free goods such as tobacco, food, gifts, perfumes, and other varieties of fine and varied commodities.

Where you can convert your foreign currency to the local Egyptian currency through exchange shops or banks spread in Terminal 1 at Sharm El Sheikh Airport, and withdrawals and deposits can also be made through some ATMs that operate around the clock.

Sharm el-Sheikh International Airport is located within walking distance of entertainment areas and dozens of high-end coastal hotels and resorts in the city.

In this section, we offer you the best 4 hotels near Sharm El Sheikh Airport based on reviews of their previous guests.

The hotel is rated excellent thanks to its cleanliness, comfort, facilities, location, free internet, value for money. 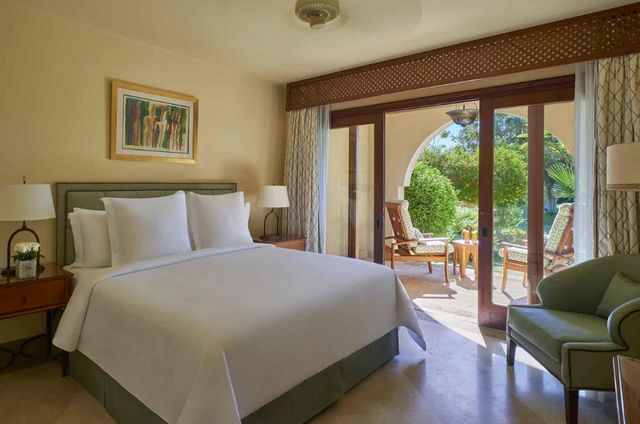 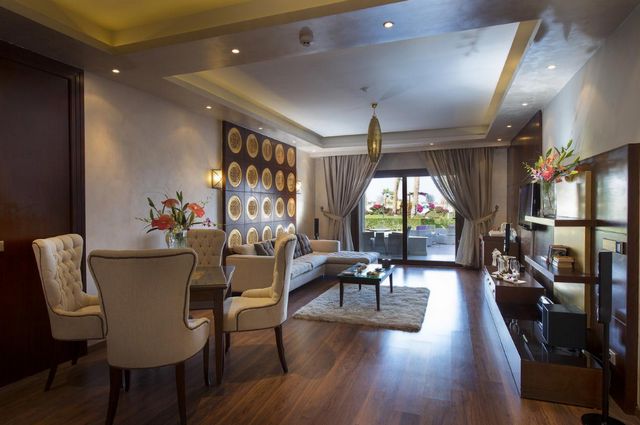 The hotel got a very good rating thanks to the location, comfort, cleanliness, facilities, reasonable price for services provided, free internet. 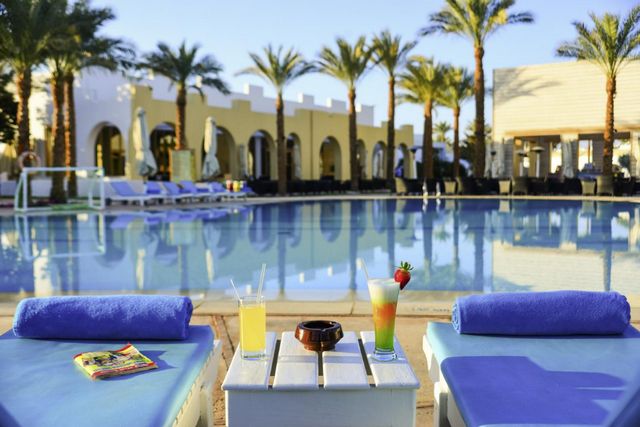 One of Egypt’s best 5-star hotels in Sharm El Sheikh, 11.4 km away from the airport, equivalent to 12 minutes of driving.

The hotel got a good rating thanks to the location, comfort, cleanliness, facilities, price, good for the services provided, while internet services got the lowest rating. 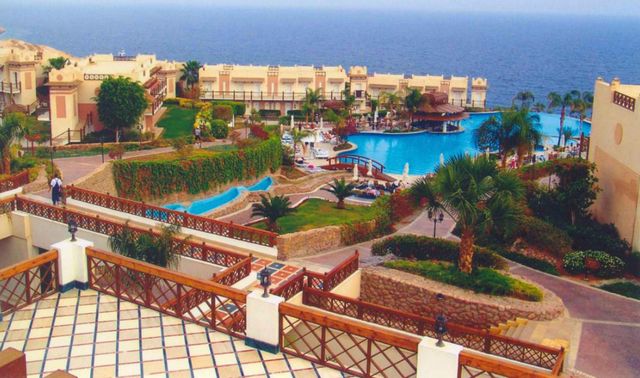