Jordan is located on the east bank of the Jordan River, bordered by Saudi Arabia in the south, Iraq and Syria in the north, and Palestine in the west, overlooking the Red Sea to the south.
Subsequently, the country fell under the rule of the Nabataean Kingdom, the Roman Empire, and the Islamic State, and then and for several centuries under the rule of the Ottoman Empire.
The tourism sector in Jordan is distinguished by its permanent development due to the continuous increase in the number of tourists, due to the variety of sites it deserves to visit.
And between its ancient and modern, several monuments in Jordan stand out among the tourist attractions, distributed in most of the country’s cities.

Between the south and the north, Jordan hosts a large group of the best hotels of excellence, which we collected for you in the guide to the best hotels in Jordan .. Read more 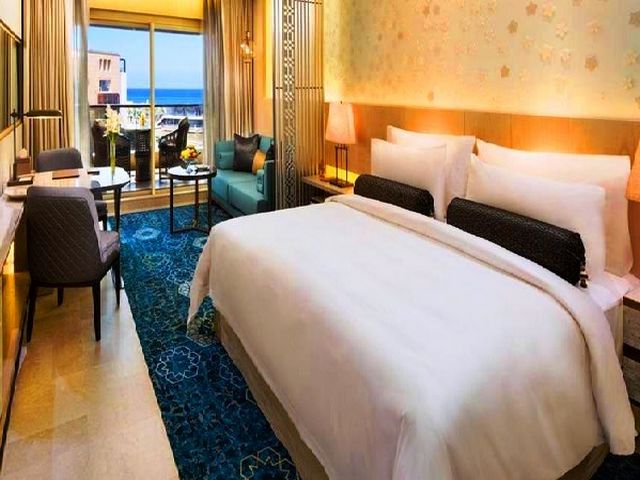 The best monuments in Jordan

Jordan is famous for its antiquities dating back to several notable historical periods, from the stone ages, through the Middle Ages, to the Ottoman Empire.
In our next few lines, we will provide you with some of the best monuments in Jordan that are worth a visit, and have won approval from visitors inside and outside the country.

We will start our journey from Petra, nicknamed the Pink City, which is one of the Seven Wonders of the World, and from the ancient sites in Jordan that are worth a visit.
The city, which is included in the list of World Heritage sites, includes many monuments such as the Siq, the Treasury, and the Obelisk Tomb .. Read more

The Temple of Hercules is located within the collection of the ruins of Jabal Al Qalaa, one of Amman’s most visited tourist places, and the most important Roman building dating back to the 2nd century AD .. Read more

Aqaba Castle is considered one of the most prominent and most visited tourist places in Aqaba, and one of the most important archaeological sites in Jordan overlooking the sea.
The castle was originally built by the Crusaders in the 12th century CE, and then destroyed after the city fell to Saladin.
The castle was rebuilt in the early 16th century AD during the Mamluk rule, then it became a theater for the victory of the Arab Revolution in the year 1916 AD.

Umrah Palace is one of the archaeological sites in Jordan within the eastern region, and one of the desert castles that highlight the first Islamic architecture .. Read more

Remains of a Byzantine church were discovered in the formulation of the summit of Mount Nebo, and six ancient tombs beneath the church’s floor that feature mosaic drawings .. Read more

The way of the nymphs

The Sabil of Nymphs is a partially preserved Roman public fountain, and is one of several monuments in Jordan located in the vibrant city of Amman.
These fountains were very popular in Roman times, and this fountain specifically was built in the 2nd century AD according to the opinions of archaeologists.
It is believed that the Fountain of the Nymphs nymphs contained a huge swimming pool with an area of ​​about 600 square meters and a depth of three meters.

The Archaeological Park of Madaba is one of several archaeological sites in Jordan, which is located within the charming city of Madaba, and which is worth a visit.
The park includes remains of many ruins and relics dating back to several eras, such as Byzantine churches, mosaic paintings of the Church of the Assumption, and the Hippolytus Hall.
Among the most important monuments in Jordan included in the park, in addition to the above, the Umayyad Medal, the Church of the Martyrs, the Palace of the Holocaust.

The Roman Amphitheater is located in the archaeological area of ​​Jabal Al-Qalaa. It is a huge theater with a capacity for about 6000 people. It is considered among the many monuments in Jordan that are currently used for national parties and festivals .. Read more

Ajloun Castle is considered one of the 12th century Islamic castles, and it is among several monuments in Jordan worth visiting in the north of the country.
The castle is located at the top of Mount Auf, and it was guarding three valleys that descended towards the Jordan Valley, built by the Ayyubids, and then expanded by the Mamluks.
Inside the square castle there is a museum that includes artifacts for different time periods, and it contains 6 towers, two of which overlook Palestine.

Jerash is considered one of the archeological sites in Jordan, which includes several unique places in Jordan, and it is worth a visit.
The city of Jerash is abundant with many diverse monuments dating back to several historical periods, which gave it an aesthetic diversity that cannot be repeated.
Among the most prominent landmarks of the city are the columns of Cardo Street, the southern and northern Roman theater, the way of the nymphs, the Hadrian’s Arch, the Temple of Artemis, the cathedral, the seminar square and others.