Istria Croatia is the largest peninsula in the Adriatic Sea, located between the Gulf of Trieste and the Bay of Kvarnier, and shared by Croatia, Slovenia and Italy, and the largest part of it, which makes up 89% of its area, represents the Croatian province of Istria, and the geographical features of the island include mountain chains and many rivers, The Croatian part of it has a continental climate.
The coast of Istria Croatia is 445 km long, and its terrain consists of a limestone plateau, which lacks water due to its karst components, and the northeastern part of it is an extension of the Alps, and includes the most famous geological attractions, and the province as a whole is a prominent tourism destination in Croatia.

Organized tourism in Istria dates back to the Roman era when Emperor Vespasian at that time built the Paula Amphitheater, and made great efforts after the Second World War to develop the region’s tourism infrastructure to emphasize its importance, and in conjunction with natural beauty, rich history and cultural heritage, efforts resulted in improved services Extremely.
We have dedicated this article to talk about the Croatian Istria, and the most important tourist sites worth visiting, from natural, historical and recreational places.

The city of Rovinj

Among the most beautiful landmarks of Istria Croatia lies the city of Rovinj in the north of the Adriatic Sea and on the western coast of the Istria peninsula, which is a famous tourist resort city, and an active fishing port in the region, and one of nine settlements officially designated in Istria County Croatia as a city, and has a humid subtropical climate .
The city has a long history as it includes many historical and natural tourism sites, and there is a daily ferry from which you depart to the center of Venice and St. Catherine Island, and the old city is one of its most famous attractions.

The Offrachian Church is located in the town of Porec, also called the Basilica of Mary. It is a bishopric and baptist complex, and it includes a bell tower that is a wonderful example of early Byzantine architecture in the Mediterranean region, and the church has preserved in most of its original form, but accidents, fires and earthquakes have changed Some details are out.
The church is also the Roman Catholic diocese of Porec Pola, and, due to its exceptional value, it is listed as a UNESCO World Heritage Site.

The spectacular Primora Peninsula extends until it ends at the head of Kamenjak Bay, 5 km south, and the area surrounding Ras Al Khaleej is a distinctive nature reserve for cycling lovers. The region includes ten main beaches that embrace a number of diving centers and beach clubs that provide all water sports needs.
The bay’s west coast is very rugged, and close to the bay as a whole there are many nearby islands.

Motovun is a village located in the center of Istria Croatia, on a hill that reaches 270 meters above sea level, and includes many medieval monuments, where the village originated on the site of an ancient city called Castelliere, along with two tombstones of the Roman population To the 1st century AD, the St. Stephen’s Church was built in the late Renaissance.
The Myrna River flows down the hill, and on its side lies the famous Motovun Forest, and an international film festival for independent avant-garde films is held in the village.

St. Mary’s Church on the scarves

Saint Mary Church is located on the scarves in the town of Biram. It is a gothic church with a balcony, an umbrella, and a wooden table on its forehead. It includes many wonderful inscriptions, statues and motifs, including the painting of the dance of the dead, which is the most famous mural in Istria, which was completed It was engraved in AD 1474, along with some Latin inscriptions on the southern wall.
All the church walls and walls also contain many statues and other frescoes depicting the life of the Virgin Mary and Jesus, peace be upon them.

The Gamma Grotta Barden cave is one of the geomorphological monuments of nature, and the first tourist cave in Istria Croatia has been open to visitors since 1995 AD, it is located in the western part of the region, 6 km northeast of the city of Porec, and includes a wonderful lake.
The cave is composed of five naturally decorated rooms that are very beautiful, and some amphibian species, such as European cave salamander, live in them.

The Lim Valley is a special geographical feature located on the western coast of Istria, with a length of 35 km around the Pazinitsa River, which is a permanent waterway and the longest river bank in the region, then the valley turns into the Limsky Zalgiv Gulf or the fjord, which is a narrow estuary, length of 10 Kilometers flow into the waters of the Adriatic Sea, and due to its geological history this estuary is one of the most examples of the hydrological development of limestone.
The Limsky Canal region is fertile land for many fish and shellfish breeds, and as such has been designated as a private reserve under the conservation order.

Australia Aquapark is a water park located in Istria Croatia within the municipality of Bertonegla, about 5 km from the Adriatic Sea. It was opened in June 2014, and it is the first Croatian water park, and is characterized by a pool of 2500 square meters, and it is the largest in the Mediterranean basin .
The park includes 20 water slides with a total length of 1.2 km, and has ranked fifth among 300 water parks in Europe. 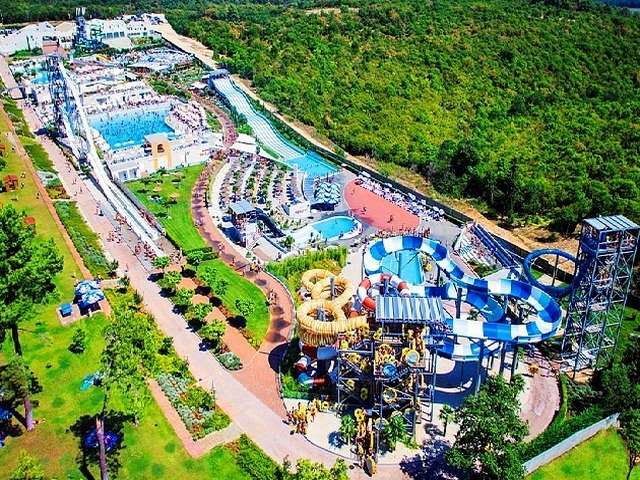 Mini Croatia Park was established in 2003 on an area of ​​5500 square meters, and it is located on the west coast of Istria, where the most important landmarks of Croatia in various regions can be seen through a walking tour within an open display square in a picturesque nature. The park includes small figures of many churches and cities Famous country, along with landscapes, rivers, mountains and islands.
The offer includes more than 300 model regional stations for the country, as well as a gift shop selling souvenir items for the country’s heritage.