The Ancient Theater, or Bodrum Roman Archaeological Amphitheater, is located on a hill overlooking the port city of Bodrum and its famous castle.
The amphitheater is considered one of the most beautiful tourist attractions in Bodrum, Turkey, which narrates the ancient history of the city, and dates back to the 4th century BC.
The amphitheater was the meeting place of kings with the people during the reign of King Musoulos, ruler of Halicarnassus, and was developed for its present situation in the 2nd century BC.
As in ancient Roman theaters, the amphitheater has three main parts: the theater, the orchestra, and the audience’s stone benches.
The amphitheater can accommodate approximately 13,000 people. The amphitheater has become an open museum after excavations in 1973 and is currently used for festivals and musical performances. 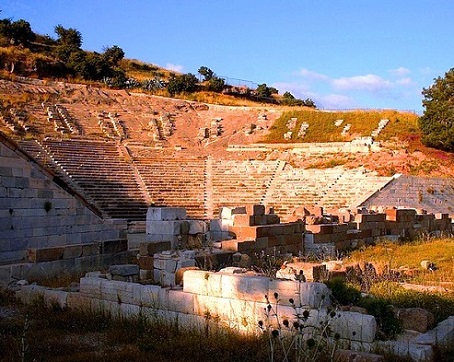 • You can walk around the stage of the semi-oval amphitheater, and take pictures of the Roman columns of scattered throughout, and the places where the audience sits in the amphitheater.
You can also take some pictures of the theater while you are sitting in the seats of the runway, and there is no harm in roaming around it for beautiful pictures. 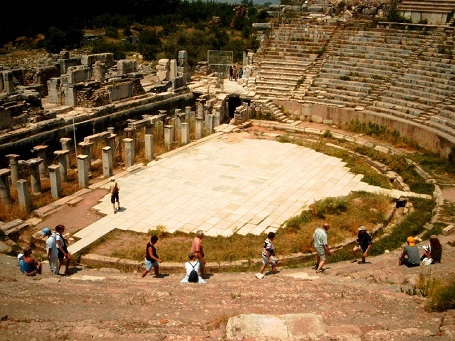 • Do not forget to reach the highest point in the runway to be able to take the most beautiful panoramic pictures of Bodrum port, and the ancient castle that overlooks the runway. 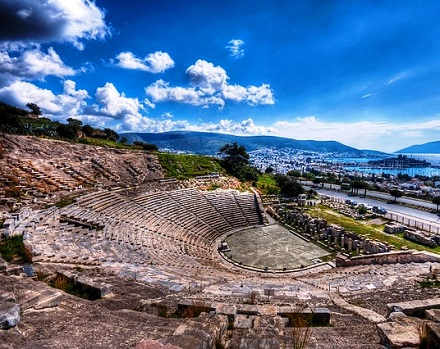 Ambrosia is a 4-star hotel in Bodrum, Turkey, with good reviews, and it is 2.3 miles from the ancient amphitheater of Bodrum.
Summary of Arab visitor ratings
The location is excellent, overlooking the beach, friendly staff, delicious food.

Club Shark Hotel is a 5-star Bodrum hotel with good ratings, and is 1.8 kilometers from the old amphitheater of Bodrum
Summary of Arab visitor ratings
The location is excellent, services are good, some visitors have complained that the beds are uncomfortable and the food is not diverse.

The site of the ancient amphitheater in Bodrum

Articles you may also be interested in in Bodrum:

The most important 5 tourist places in Bodrum

The most famous 7 places to shop in Bodrum