The 6 best activities in Heydar Aliyev Center in Baku Azerbaijan

Heydar Aliyev Center is one of the world-famous cultural centers of Baku and one of the most important tourist attractions in Azerbaijan
Heydar Aliyev Cultural Center in Baku is a spirit of culture and creativity in the city, a section of it on the roof and there is a small section under the ground. 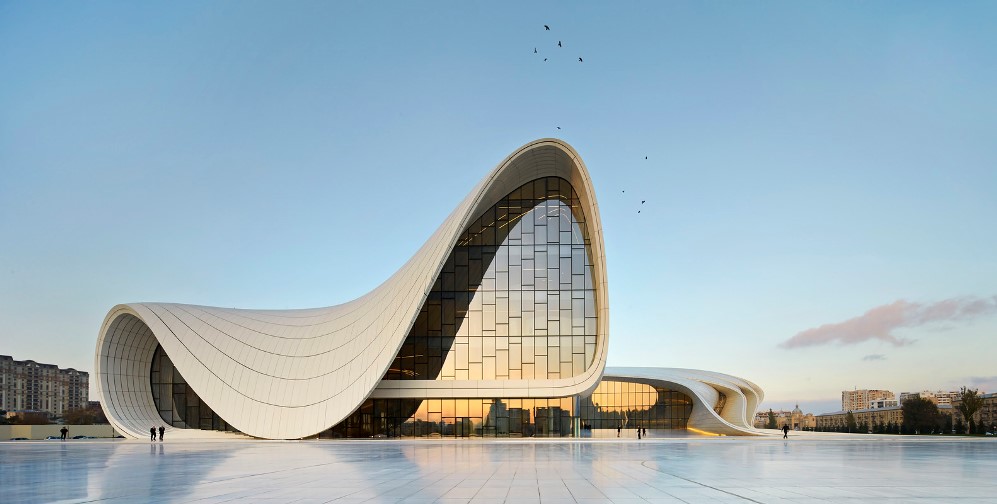 The Iraqi designer Zaha Hadid was distinguished by the unique design of the building in the form of curves somewhat similar to the high waves of the sea, which come in succession to give amazing flow from the square outside the construction, and ending with the building roof.
Zaha Hadid won the 2014 London Design Museum Award for this center, as it gives a civilized image of the country, especially as it bears the name of former Azerbaijan President Heydar Aliyev. 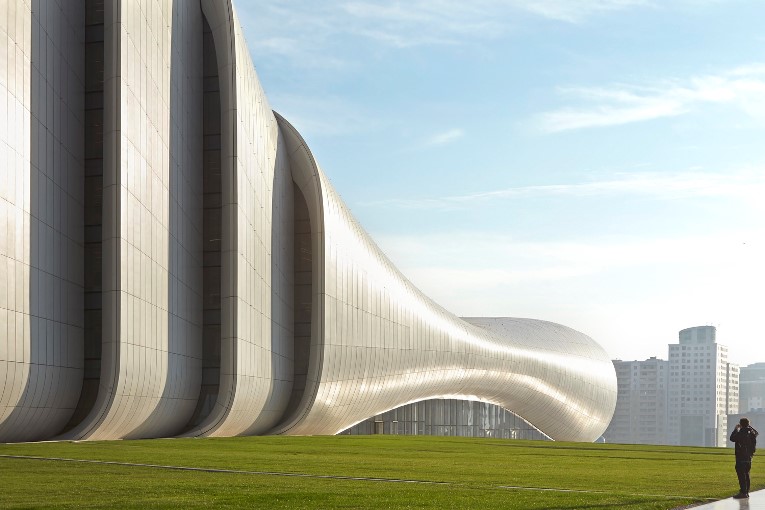 The center was opened in 2013 after the construction and building work lasted for about seven years. The total area of ​​the center is about 57,000 square meters and a height of 80 meters.
It contains a huge four-storey car park, in addition to its oversight of distinct natural areas, an industrial waterfall falls on one of its walls to give a kind of tranquility to visitors, inside it there is a group of swimming pools, a conference center and a large library, all of which overlap within an open space and no internal Something gets in the way. 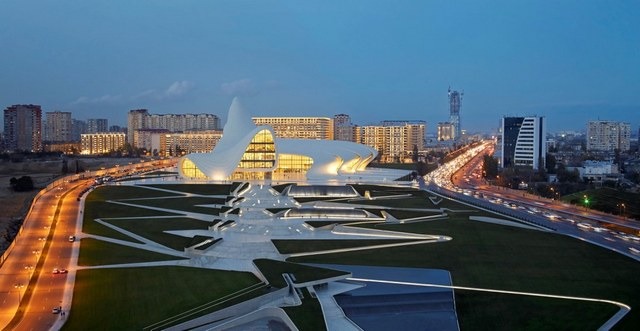 • Take a tour of the place and see the splendor of its design from the outside, and it is enjoying wandering between its sections and its exhibits from the inside. It is considered one of the most prominent tourist places in Baku and a contemporary historical cultural edifice. 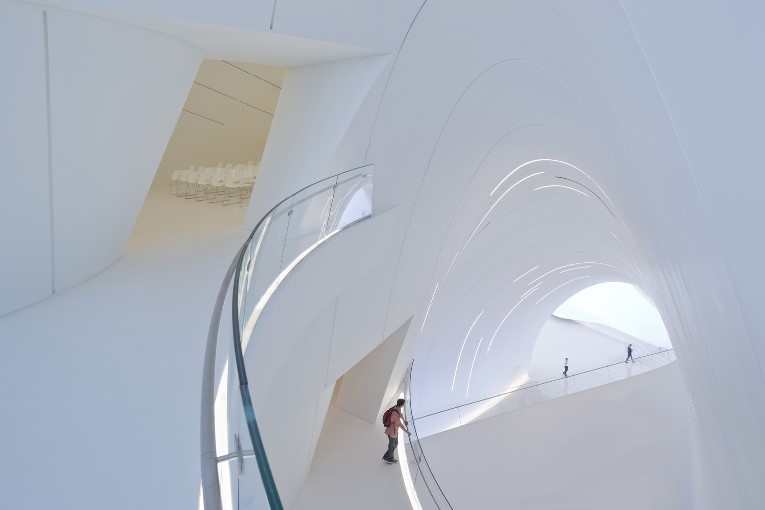 • Learn about the history and culture of the country, as it displays ancient archaeological exhibits from the Stone Ages and other modern and contemporary period of Heydar Aliyev’s rule.
The center offers a cultural heritage exhibition that displays all periods of the history of Azerbaijan and unique examples of ancient crafts, especially in the carpet weaving of which Azerbaijan is famous. 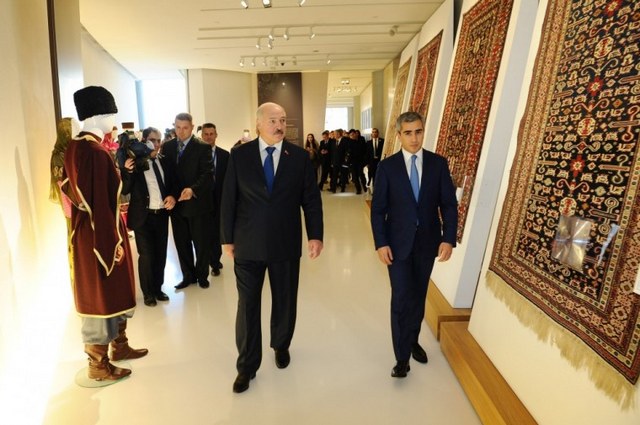 • You can also check out an exhibition of rare old cars that have been produced since the end of the nineteenth century to the sixties of the twentieth century inside it in a special hall. 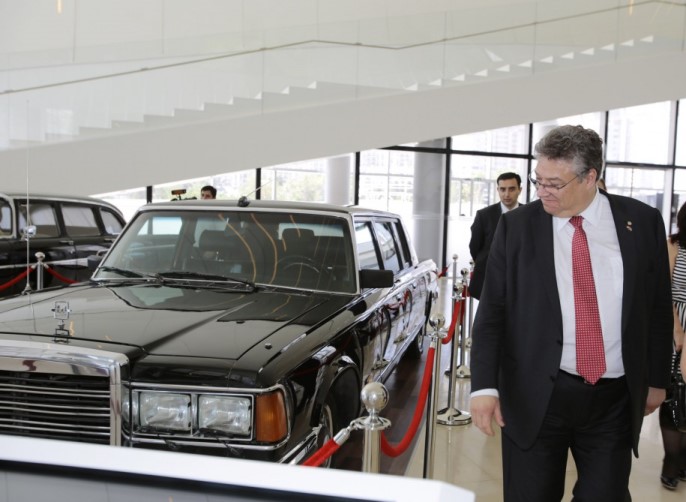 • One of the things that distinguishes the center’s exhibits is that it contains about 39 artworks by the famous British sculptor Richard Al Shammai, in addition to small artworks of wood, metal and ceramics for many artists. 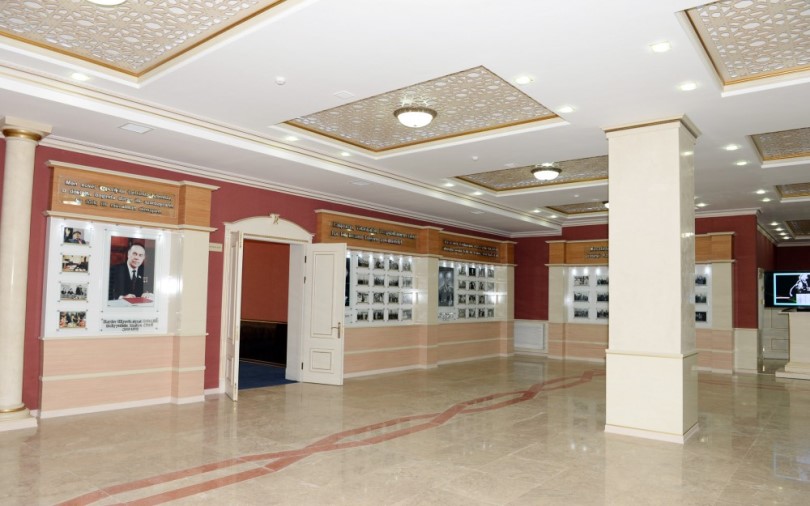 • Within this wonderful architectural and engineering masterpiece and a streamlined design, you will not stop taking dozens of photos in the corner of the center where one visit to the center will make you search for beauty features everywhere. 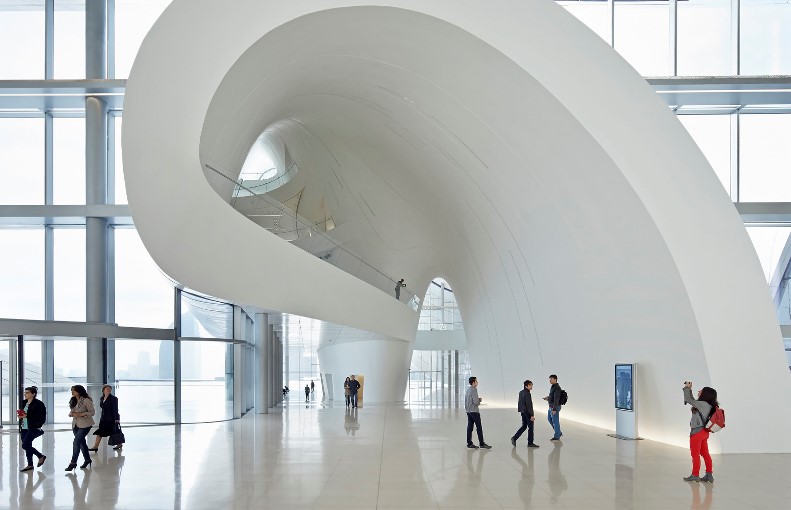 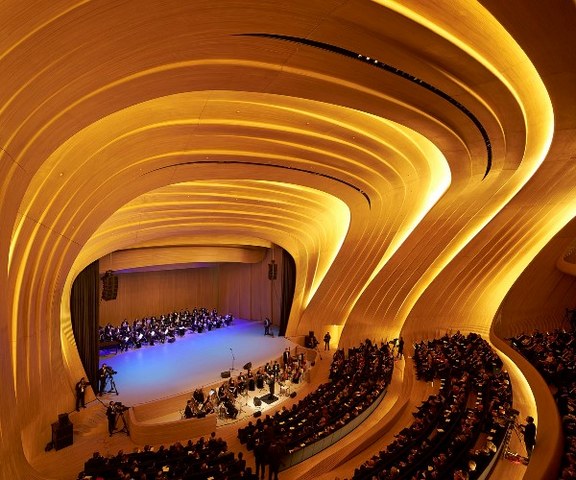 Mondays are closed. As for the rest of the week, the museum is available for visiting from 11:00 AM until 18:00 PM.
To view the prices of entry or reservation cards through the Internet, you can visit the official website of the Haydar Center ..from here

Excelsior Baku Hotel & Spa is one of the best hotels in Azerbaijan 5 stars 0.5 km from Heydar Aliyev Center in Azerbaijan
Summary of Arab visitor ratings
The hotel got very good reviews for the location, cleanliness, staff.

Opera Hotel is one of the best 4-star hotels in Baku, 0.8 km from Heydar Aliyev Center in Baku Azerbaijan
Summary of Arab visitor ratings
The hotel got very good reviews for the location, cleanliness, staff, comfort. Some guests complained that there was no assistant to carry the bags.

The best activities in the Grand Canal in Venice, Italy

The 6 best activities in Virgo in Baku Azerbaijan