The Bouanania School, founded by Sultan Abu Annan al-Faris, was built in 751 AH as the school rises to the northeast of the Kasbah of Boujloud.
It oversees the city of Fez.
The building constitutes a school and a mosque at the same time. It was established by the Sultan to teach science, perform Friday prayers, and compete with the Attarin School.
The school takes the rectangular shape, which consists of an open courtyard, a mosque, two classrooms, large reading rooms, a water clock, and a patio with a water basin.
The Bouanania School is considered one of the most important tourist attractions in Fez.

The best activities that you can do at the Bouanania School

• You can see the entrance to the school through the vaulted corridor, and see the entrance consisting of two right angles to reach the courtyard, surrounded by two sides, lights of different dimensions and shapes. 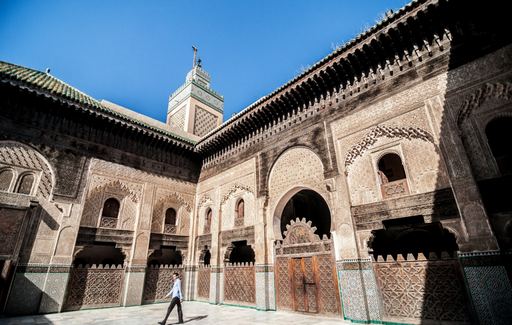 • You can see the mosque’s open courtyard and student rooms distributed over two levels, a minaret and two ablution rooms
You can see the corridors surrounding the courtyard, which is carried by huge bases, which reach the students’ rooms. 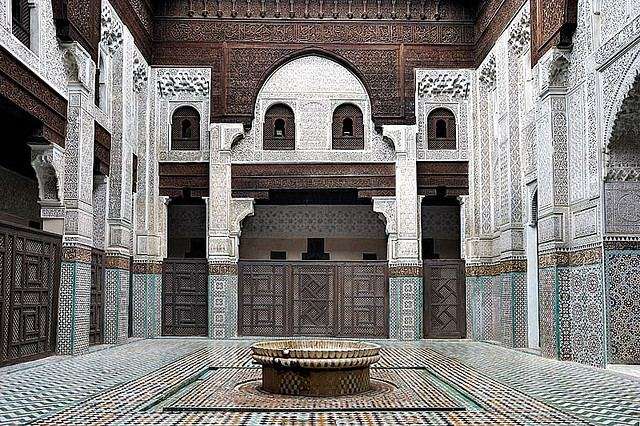 • You can also see the other façade of the courtyard through which a channel connected to one of the river’s rivers passes to provide the city with water.
• You can also see the road leading to the prayer hall through a large courtyard, which is covered with white marble, and its facades are decorated with traditional motifs.
The tiles are decorated under the columns of the portico arches. It is a network of white interlocking lines and black, blue and red geometric motifs, surrounded by small green squares. On top, there are reliefs engraved on glazed squares in black.
• You can also see the three facades of the mihrab, inscribed with Qur’anic verses and the wooden pulpit dedicated to delivering the Friday sermon.
• You can watch the water clock that was operating according to a precise system that combines water throughput and moving the clock by means of ropes that result in a falling metal ball that determines the timing. 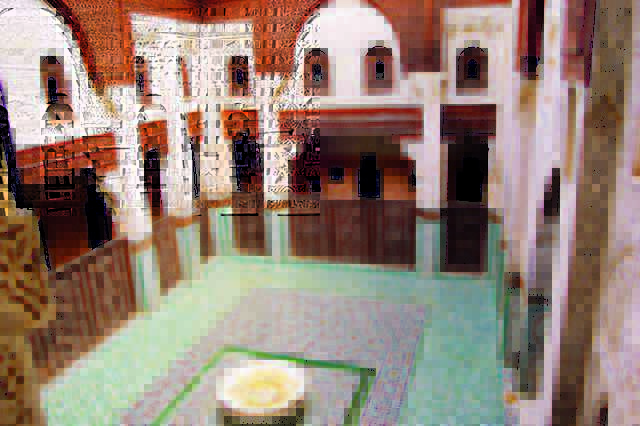 The Bouanania School is available for visiting all days of the week from 9:00 am until 18:30 pm.
Entrance fees are free and may require a small amount depending on the tourist season.

The best Fez hotels near the Bouanania School

Riad Fes is a 5-star hotel with an excellent rating among the best Fes hotels. It is less than 10 minutes’ walk from the school.
Summary of Arab visitor ratings
The hotel got excellent reviews for the location, cleanliness, services, location, staff.

Dar Taheri is a 5-star hotel with a great rating among the best hotels in Fes, just a few steps away from the madrasa al-Bouanania.
Summary of Arab visitor ratings
The hotel got great reviews.

The 5 best things to see in the Al-Karaouine Mosque, Fez, Morocco