The best 3 activities when visiting the Coptic Museum in Cairo, Egypt

The Coptic Museum in Cairo, this museum was opened in ancient Egypt within the borders of the Fortress of Babylon, whose remains are located behind the museum building, but many additions occurred to it during the reign of the Roman Empire and then added to it those who came after them from the Roman emperors. It is one of the best places of tourism in Cairo
The number of holdings in the Coptic Museum is about 16,000. The museum’s holdings are arranged according to their types, into twelve sections. They presented a scientific presentation that took into account the chronological arrangement as possible.
The Coptic Museum is the largest museum in the world for the antiquities of Egypt from the Coptic phase, and one of the most important tourist attractions in Cairo.

The best activities you can do in the Coptic Museum

• The museum contains many departments such as the Fabrics and Textiles Division dating back hundreds of years, the ivory and icons section, the wood and metal department, and the glass section. 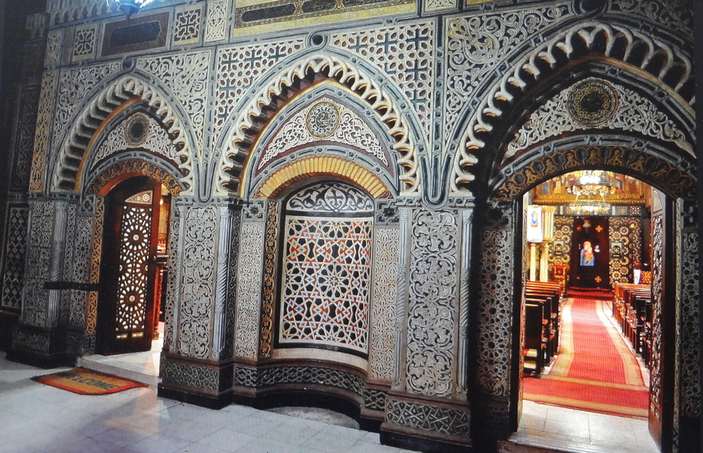 • You can see the tomb made of gaseous stone, which shows the overlap between the signs of the cross and the ankh, which dates back to the end of the 4th century AD.
You can see pieces of fabric bearing some Christian symbols dating back to the sixth century AD.
You can also see a bronze lamp with a crescent and cross handle, and an inscription on ivory comb showing some of the miracles of Jesus.

The times of the Coptic Museum in Cairo

The price of the entry card for non-Egyptian tourists is 50 pounds, and for children under the age of four, admission is free.

The best Cairo hotels near the Coptic Museum

Four Seasons Hotel Cairo First Residence is one of the best 5-star hotels in Cairo, less than 25 minutes by car from the Coptic Museum in Cairo.
Summary of Arab visitor ratings
The hotel got great reviews in every way.

The Kempinski Nile Hotel is one of the best 5-star Cairo hotels in Egypt, less than 30 minutes by car from the Coptic Museum in Cairo.
Summary of Arab visitor ratings
The hotel received very good reviews for the view, cleanliness, services, and size of the rooms.

The site of the Coptic Museum in Cairo

The best 4 activities when visiting a fish park in Cairo, Egypt