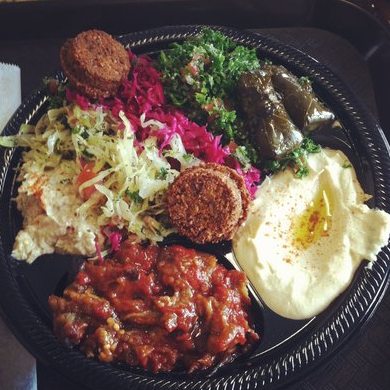 Joe's Falafel Restaurant Address: 3535 Cahuenga Blvd W Fresh pita bread and fresh ingredients is what makes this restaurant one of the best Arabic food restaurants in Los Angeles. The most famous dishes served by this restaurant are: (falafel, Greek salad, lemon chicken, and chicken shawarma) and all These foods have a nice and delicious Arabic flavor. There is a small car park for this restaurant in addition to the car parks on the street. 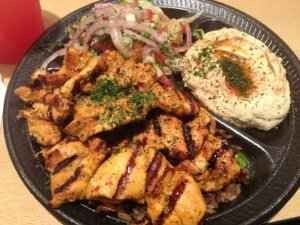 Beta bar & Grill Restaurant Address: 519N. Fairfax Ave Whether you like meat or veggie dishes, this restaurant will offer you many options such as: (Shakshouka, Hummus, Shawarma, and kebab). The food in this place is characterized by authentic Arabic spices, the kindness of the staff in the restaurant, and the delivery of food quickly.

Farida Restaurant Address: 6266Sunset Blvd The owner of this restaurant is called “George Abu Dawood” and he named this restaurant as “Farida - Farida” after his grandmother's name. This place is pleasant looking, it is full of many colors in (chairs and walls) and is characterized by the presence of Moroccan tiles glazed with white tiles, and the walls are covered with posters (posters) of Egyptian cinema, and also is characterized by the use of traditional Arabic spices and the presentation of authentic Arabic dishes. Among the most famous dishes that are served are: (lamb shawarma with hummus, eggplant, eggs, pickled turnip and beet flakes with thyme).

Bowery Bungalow Restaurant Address: 4156Santa Monica Blvd This restaurant is the first restaurant in Silver Lake that reflects Lebanese and Egyptian heritage, and serves traditional Arabic dishes from the farm to the table. This cozy place with Arabic origin contains a mini bar, hanging lights, brick walls, and vintage cooking tools. And among the most famous dishes that are served: (Moroccan couscous with saffron, chickpeas, beef, hummus, tahini with grilled chickpeas.

Momed Atwater Village Restaurant Address: 3245Casitas Ave This restaurant was opened in 2010 by its owner named "Alex Sharkissian" and at this time the Arab food in Los Angeles was limited to (falafel, hummus and shawarma dishes). The owner of this restaurant would like to put a glimpse of traditional Arabic food in his restaurant, and he called it “Modern Mediterranean”, which was shortened to the name “Momed”. The food in this place combines the taste (Egyptian, Moroccan, Tunisian, Turkish, and Greek). And among the most famous dishes that are served: (Shakshouka, beef rib tagine served in the traditional Moroccan bowl, with couscous, dried apricots, almonds, roasted shallots, and cherry tomatoes).