The most important tourist attractions in Britain

The best tourist cities in Italy

The coolest tourist islands for the autumn vacation

Top 5 destinations in August this year

The most beautiful places of tourism in Madrid, Spain

Learn about the most beautiful tourist areas in the Comoros through this article, Comoros is one of the countries located on the east coast of the African continent, which is an archipelago that includes several main islands, numbering to four islands, in addition to some other sub-small islands, and islands are distinguished The moon contains many natural tourist places in it, and in this article today on Arab travelers we show you the most important tourist places in the Comoros.

The most beautiful tourist areas in the Comoros

Comoros is one of the Arab African countries, and it is officially called “Comoros Islands” with an area of ​​1.862 square kilometers, and it consists of four main islands: Mahori, Anzouani, Nagasigiao, and Mawali, in addition to some other small islands.

The capital of the Comoros

The capital of Comoros is the city of Moroni, and this city is located on the island of Grand Moon.

The Friday Mosque in Moroni is one of the oldest and most famous mosques in the city, and it is distinguished by its distinguished engineering architecture, white color, white dome, and many ornate shapes found on the doors, where you feel the past that is reflected in the Arab heritage when visiting, which gives an atmosphere Spiritually beautiful. 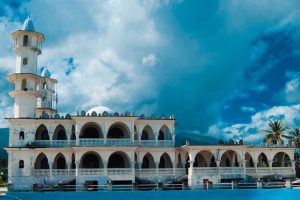 Moheli is the smallest of the four main islands located in the Comoros country, and this island is distinguished by access to the past, as it does not have any feature of the features of development; it is characterized by an innocent island, and includes a number of rocky islands that spread on its surface, and you can enjoy watching many Of the types of beautiful marine creatures, such as whales, dolphins, and sea turtles; the beauty of this island can distract you from the lack of many aspects of development, and luxury.

The island of Mayotte in the Comoros is considered one of the most famous tourist places there, which many people used to go to, and this island belongs to France after its people refused to refer to their independence when the people of the other islands were liberated from the Comoros archipelago, and its name was derived in the French language from the Arabic word ” Death ”, which gives an indication that this island is the island of death because of the coral reefs that lead to the destruction of ships. Tourist brother Irrigation, like scuba diving, snorkeling and sailing, these islands have good infrastructure.

Read:Where is the Taj Mahal in India

Grand Moon Island is the largest island in the Comoros archipelago, and these islands are characterized by a better economy than other islands, in addition to that you can live the experience of seeing many stunning views, such as dark solid lava, silver lava, and many sandy beaches that are distinguished Its sand is white, and it is one of the most quiet places to be nominated for the holidays.

Mount Karthala is the most active volcano in the world, reaching a height of approximately 2300 meters, and this volcano erupts regularly; it erupts once every eleven years, and the last time the volcano erupted was in 2005, you can enjoy watching the lava with its distinct forms that Take it, as well as you can climb up to the edge of the volcano.

It is from the highest mountains of Anjouan Island, and reaches a height of nearly 1,600 meters. By climbing on top of the mountain, you can see the entire archipelago that includes the Comoros in an amazing, unique experience.

Read:What is the capital of Canada

Today in this article, we presented to you on the comprehensive Arab travelers website a number of the most important tourist places in the Republic of Comoros. Follow the new Arab travelers.

What to wear on the beach in Dubai

Amazing facts about Burj Khalifa – the tallest tower in the world

Tourism to Zell am See

The best 3 star hotels in Rome .. for an economy trip