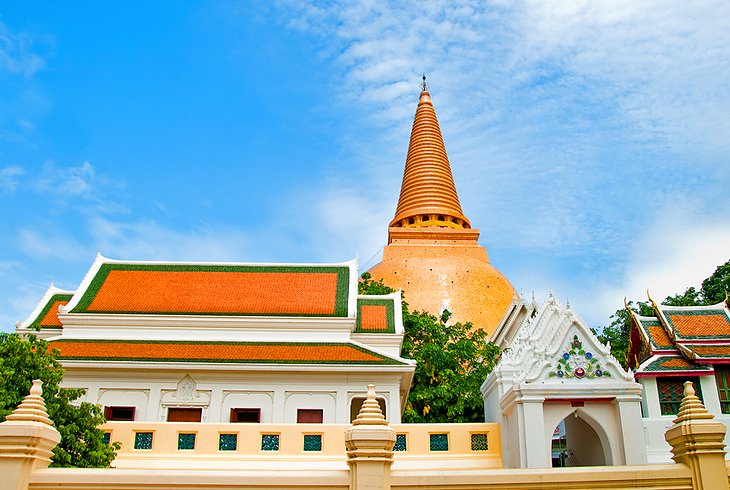 – Phra Bakhum is known as the holiest area, and it is the most important attraction in this region, and it is the longest Buddhist monument in the world, and it is located higher than the famous Shwedagon Pagoda in Yangon Burma, and is famous for the tragic legend of chedi, where it is said that one of the astrologers told the ancient king Phya Kong said that one day his son would be killed, the king sent his son to live in the woods, where a woman found him and raised him, and when he became a young man, the son named Faya Ban entered the service of the King of Ratchaburi, who was subordinate to the king of the neighboring kingdom of Nakhon Chase, and circled Juveniles even killed his father.
– And this magnificent place is located on a circular terrace in the middle of a square garden surrounded by a network wall with the main entrance on the north side, as it features stone ornaments decorated with rich ornaments and seven head motifs, and one of the buildings on the balcony, holds a very fine Buddha statue of quartz Encrusted, covered with varnish and gold leaf. 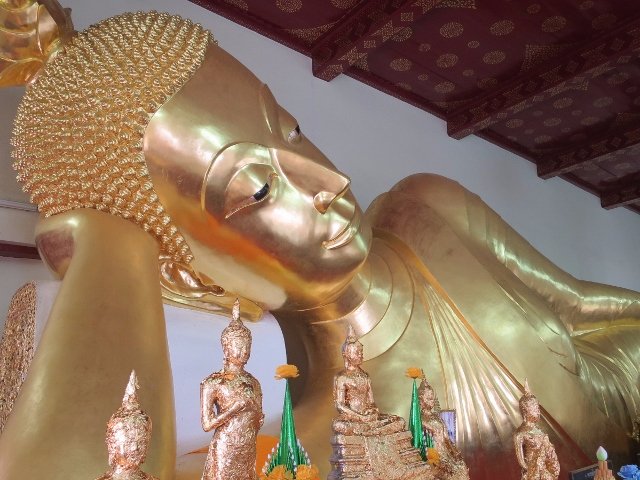 The Museum of the Old Temple, which contains a statue of Moon and stone decorations, is located in wiharn to the north of the eastern entrance, and goes back to the year 1979 and extends southward, and in this museum you will see stone wheels of law from the early days of Nakhon Pathom, as well as coins Metal, Buddha statues, and everyday objects from the ancient past in Thailand, and there are also a number of stone and clay sculptures and Buddhist passes inscriptions for his early disciples. 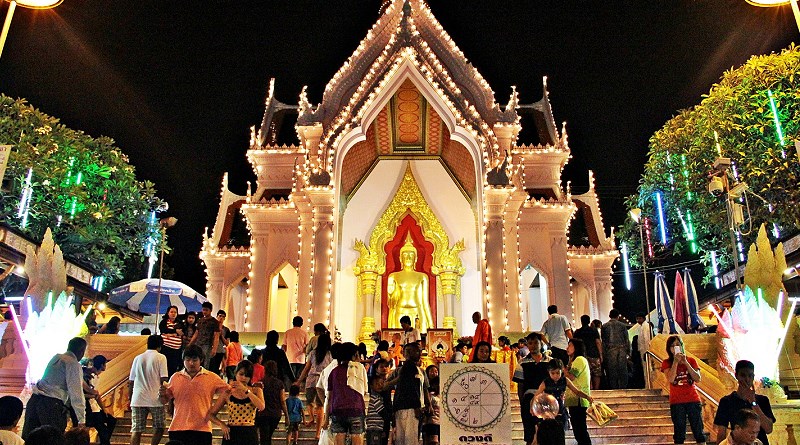 Every year visitors from all over Thailand flock to the grand Nakhon Pathom temple festival in November, and the magnificent city is lit with fairy lights while the classic drama of dance, shadow plays and other entertainment takes place on the terraces, and the large square turns into a theme park. 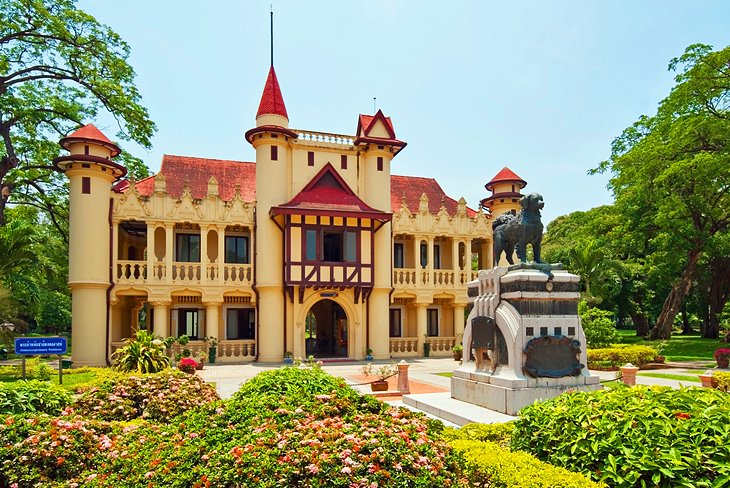 – In 1910, before he came to the throne, Rama VI built Sanam Chan Palace in the northwest of the city, and the palace resides in large areas and connects a wide street to the western gate, and includes some interesting buildings in a mixture of Thai and European styles .
There are a number of ornate halls that were used in theaters and meeting rooms, as well as the Phiman Pathom Hall where Rama VI is said to have seen a super vision of Phra Pathom Chedi, and a room was kept for the public in Bangkok, the style, and a small shrine also contains the Hindu deity Ganesha Also, the palace includes many wonderful and ornate statues. 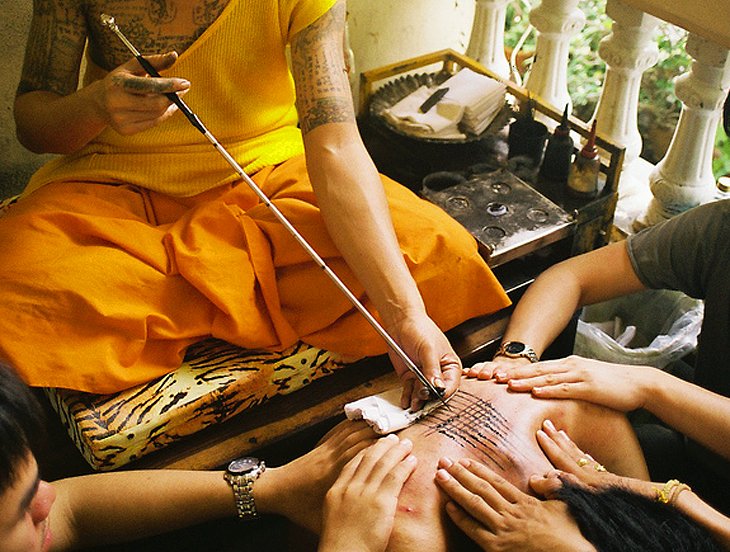 The origins of the temple are unknown, although it is also believed to date back to an ancient period, and monks practice the art of giving the leg of Yant Tatu, which is a traditional art form of the nature of temples and buildings in this region, and tourists can visit the area and obtain a wonderful tattoo, and The place basically aims to protect from evil, and make it provide strength and luck, which is the site of the famous annual Sak Yant Festival, where thousands of visitors flock to Nakhon Pathom to practice worship and honor art.

The building is born 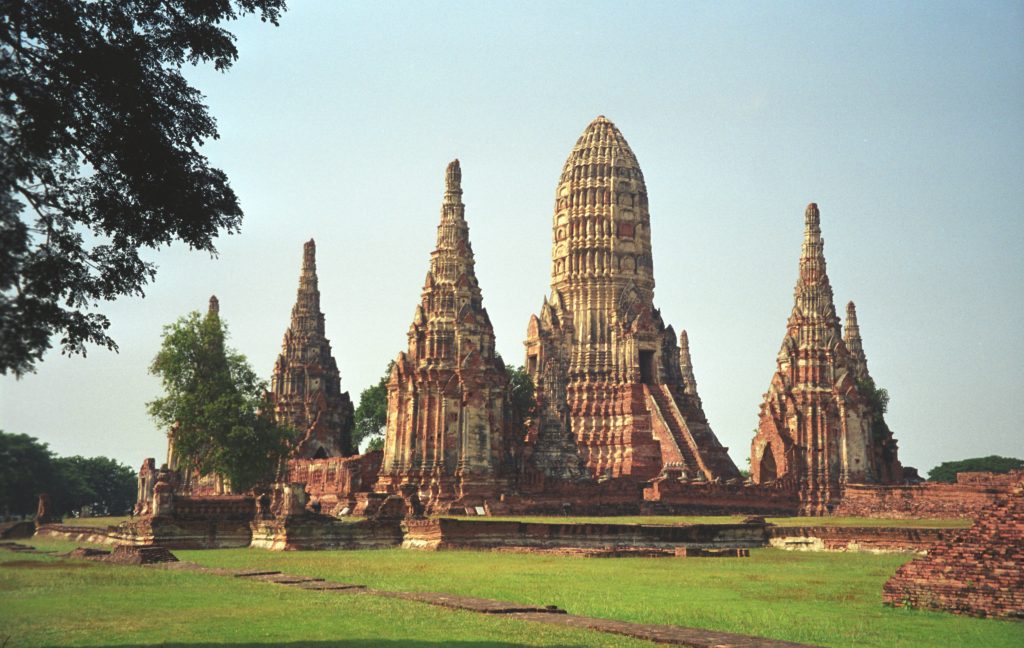 Although less eye-catching than Phra Pathom Chedi, this white-painted pang has a square base which is an important site, especially for those interested in Buddhist history in Thailand, and it is believed to be the oldest Buddhist building in the country, and archaeologists have discovered traces of foundations The terraces of the sacred building, parts of cornices decorated with figures, and many pictures of the Buddha are around. 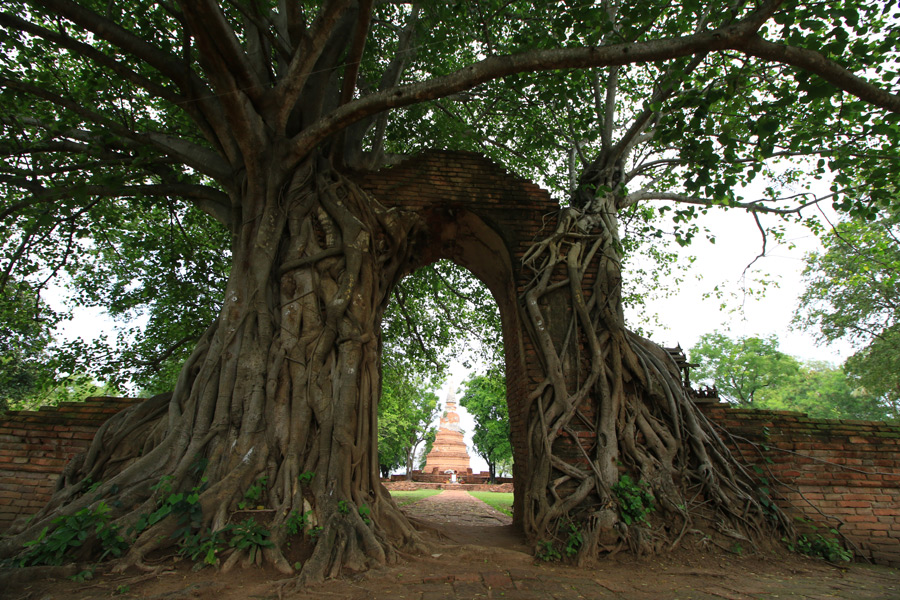 The temple of Wat Phra Naam is known as the temple of the magnificent Buddha pictures, and the site was excavated from a number of artifacts, and the discoveries included pictures of sandstone Buddha, the temple includes statues of crouching deers, bronze and earthly Buddha images, and the construction of Bangkok style temple. 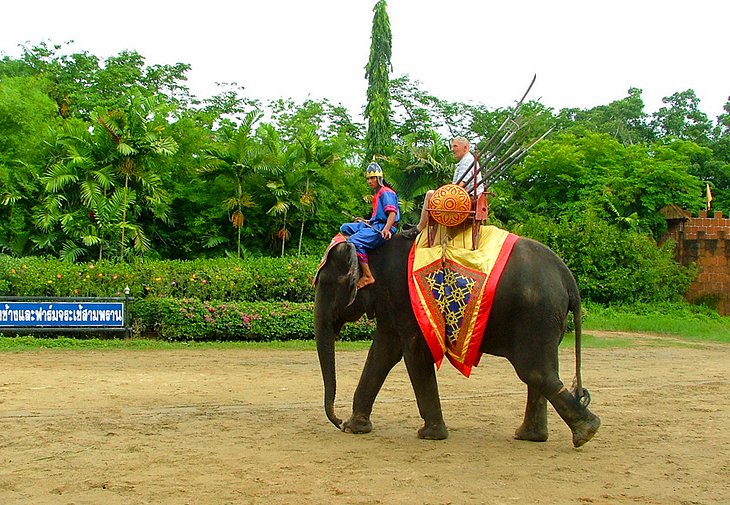 East and West meet in this region, where guests can enjoy many Italian-style gardens in a unique Thai atmosphere, it is an ideal place for wandering in the nature while retaining some of the comforts of home, and there are hotels, swimming pools, tennis courts, golf course and restaurants Serving Western, Chinese and Thai foods.