The most important tourist places in Kuwait

The magic of Kuwait entices visitors and residents alike to spend hours of time discovering the important sites in its history and culture. All these places are located within short distances close to each other, and as an oasis in the desert, Kuwait shows a wonderful mix between the ancient Arab world and a prominent landmark of a modern Gulf state. 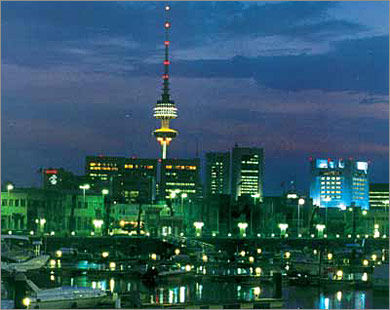 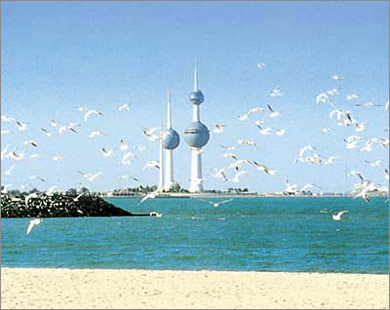 Kuwait City is the entertainment tourism city, providing its visitors with various entertainment services, the majority of which are managed and organized by the Tourism Projects Company in cooperation with local companies.
Entertainment City:
The Entertainment City stands out in the forefront, as it is the largest entertainment facility in Kuwait and one of the most important entertainment cities in the Middle East. The city is located in the Doha region and has an area of ​​one million square meters. It includes in its various sections the latest means and forms of entertainment in the world, and its doors are opened for different age groups.
Sea front:
Perhaps the most important thing that attracts the attention of tourists is the waterfront area, with its great tourism potential, parks, fountains, clubs, theaters, restaurants, museum for boats and an exhibition of aquatic life, along with the folklore arts and cafes that embody nostalgia and the heritage of parents and grandparents.
The waterfront project extends 21 km and includes 12 service centers and includes Kuwait Towers, Green Island, Swimming Pool Complex, Al Shaab Sea Club, Ras Al Ard Club and Yacht Club.
Water Park (Aquapark):
An important tourist entertainment edifice that was established on an area of ​​74 thousand square meters along the sea, and was devoted to various water games, where fast water slopes, kimkazi pools, artificial waves and others.
Musical fountain: 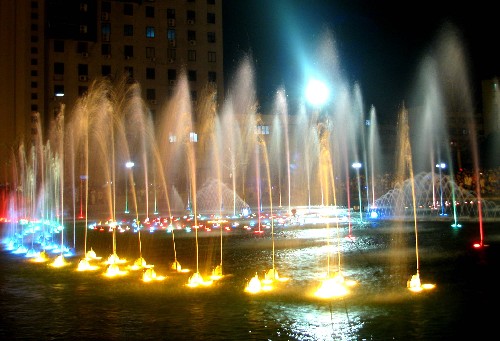 It is the fourth of its kind in the world in terms of the largeness and multiplicity of ponds and fountains. It is located near the skating hall and includes three tiered ponds that include 220 fountains allowing the enjoyment of watching the colorful dancing water on fun musical tunes, as its waters dance in bright colors on the musical tunes.
Yacht Club: 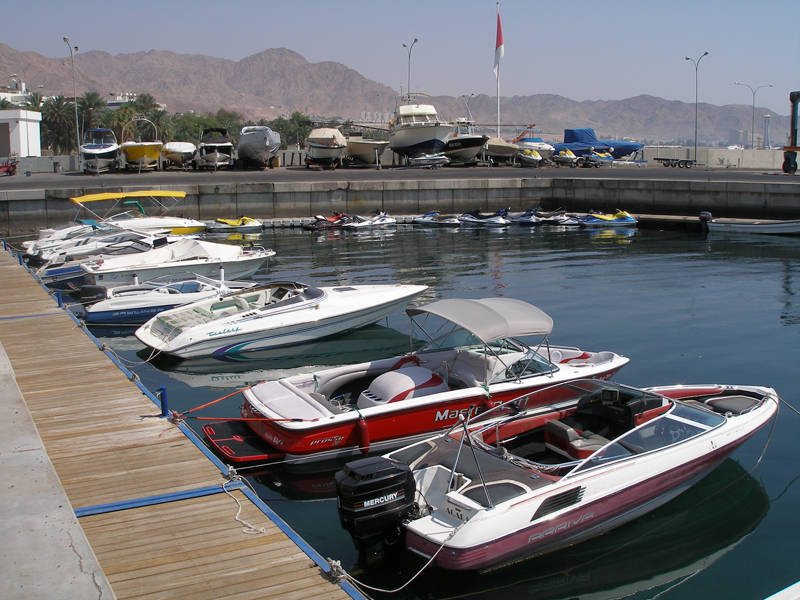 It provides its owners with a real pleasure for the yachtsmen as it contains a large docking dock designed with a unique engineering method to repel strong winds and can accommodate about 300 boats.
Ski hall: 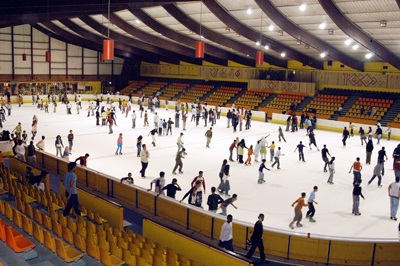 For hobbyists to enjoy ice hockey matches and the temperature in them reaches nine degrees below zero during the summer months, it also allows its pioneers to watch exhibition teams on ice.
This hall is a sports hall is the first of its kind in the Middle East, and its total area is 8398 square meters, and is divided into two halls, the Olympic Hall which is the largest and the women and children hall, and the hall is equipped with all health, training and security services and all ski equipment.
the green Island: 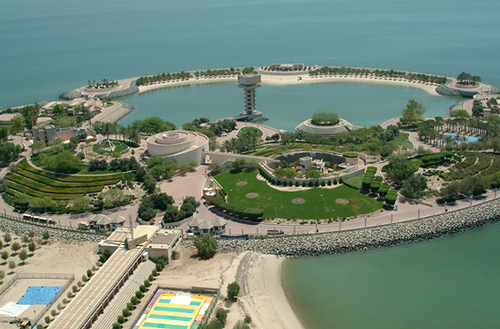 This island crawls in Kuwait inside the sea where there is a lake dedicated to swimming and various games, and the island was made by the Tourism Projects Company near Kuwait Towers on a sea area of ​​750 thousand square meters, with a diameter of half a kilometer and connected to the mainland a 134-meter corridor.
The island includes all recreational services for all ages, and includes a 35-meter-high tourist tower, a children’s recreational castle equipped with trenches, waterfalls and a spiral that is penetrated by a spiral road.
Markets and complexes: 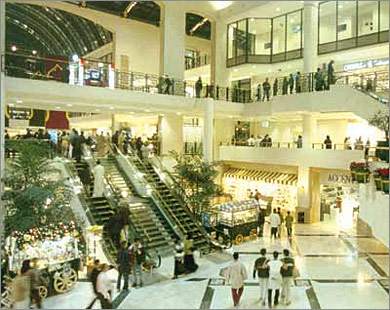 In Kuwait City alone, there are 23 huge modern complexes, which with open markets constitute an attraction that attracts visitors always.
In Kuwait, careful tours can be made in the old souqs in the Safat area, such as the Harem market, in which women handle the sale of various items of traditional clothes and handicrafts, some decorations, the Waqif market, and the modern markets spread in Fahad Al Salem Street, which is the heart of the commercial and financial movement in Kuwait.
Al Mubarakiya Market: 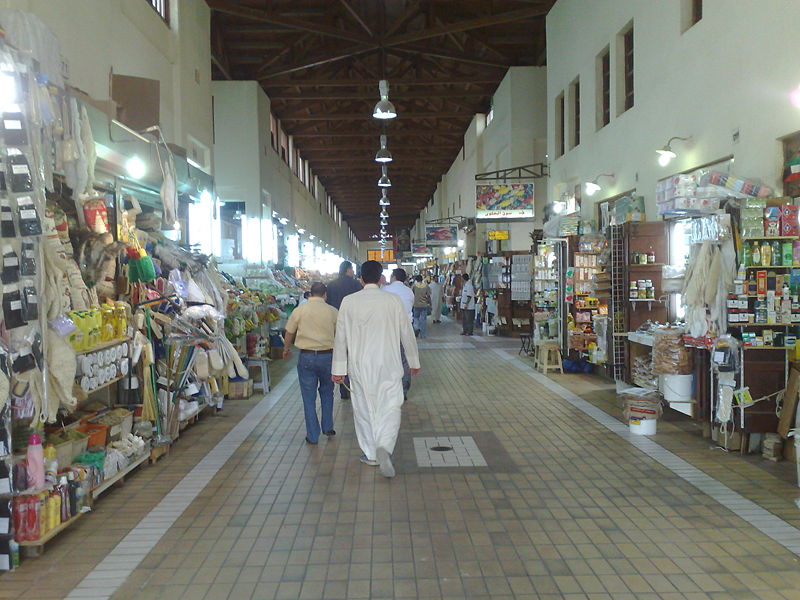 It is one of the most important markets and is in itself an architectural masterpiece with its magnificent galleries and its steep alleys of heritage and history, to constitute a kiss for resident and visiting shoppers.
This market is abundant with abundant types of meat, fish, foodstuffs, consumer goods, sweets, dates, honey, perfumery shops, and men’s, women’s and childrens garments .. In addition to a pleasant collection of accessories stores, heritage goods, antiques, ceramics and souvenirs, all at reasonable prices for all levels.
There are also good numbers of cafes, breaks, and restaurants that serve drinks and favorite foods among visitors, including Gulf, Indian and Iranian dishes, inside Mubarakiya Market.
As a visitor wanders through the corridors of Souk Al Mubarakiya, the visitor can live the atmosphere of the old markets of Kuwait. The ceilings appear as if they are of cedar wood covered with palm fronds.
The market is completely covered and is not affected by the fluctuations of weather abroad, and the market serves a spacious car park located directly below the market, and is linked to the market through a group of elevators and escalators scattered in all corners.

As for the modern markets, Kuwait is filled with many commercial complexes, whose stores compete to attract customers through competition in designs, types, quality, and prices.

Among the most famous of these markets is the East Market, which is a new urban jewel added to the waterfront, built on wide areas adjacent to the beach, at a total cost of 35 million Kuwaiti dinars.
The ground floor includes shops and trade fairs, while the second floor in addition to the shops includes restaurants and cafes overlooking the city and the marina, in addition to that the market contains three cinemas and stores to entertain young and old and an external theater, and a health club was built on the western side of the market And a union of fishermen and a garden named the martyrs park and a house that represents the Kuwaiti environment and popular coffee.
A picture of Sharq Market. . 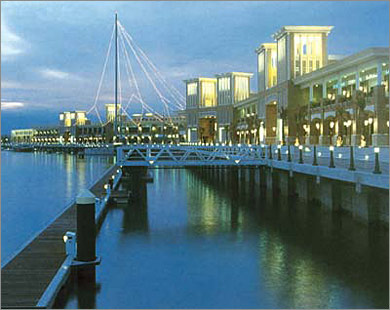 Also, one of the most amazing complexes of Kuwait is the Marina Mall, which is located in Salmiya. . Marina Mall is one of the largest commercial complexes in Kuwait. . It is divided into two parts. . A bridge connects them. .
The first section is the mall. . Contains the most famous clothes, accessories, cosmetics and furniture stores. . One of the most famous international stores. . In the center of the complex there is a large glass dome. . In the center, a group of restaurants and cafes. . Either on the upper floor of the complex. . It contains fast food restaurants. . Food Court. . There are also children’s play shops and cinemas. .
As for the second section of the Marina Mall. . It is located directly on the sea. . It has a great view. . Where there is a dock for yachts. . This section contains restaurants and cafes. . This section links the pedestrian mall with a pedestrian bridge over the Arabian Gulf Street. .
Scientific Center:
The Scientific Center is a gift of giving to the people of Kuwait, which was built by the Kuwait Foundation for the Advancement of Sciences in compliance with a noble and generous initiative from His Highness the Amir of the country, Sheikh Jaber Al-Ahmad Al-Jaber Al-Sabah, may God have mercy on him and sponsored him to be a distinguished center for spreading environmental knowledge in the Arab Gulf region. The scientific center is located on the waterfront in Ras Al-Ard in the Salmiya region, and it includes 3 main facilities, the aquarium, which allows the visitor to see the natural environments in the seas, through tunnels rich in marine life and natural habitats in the deserts and in the coastal outskirts of the Arabian Peninsula, And the Discovery Hall with its interactive exhibits and its distinguished resource center that embraces educational enrichment programs for children in addition to a 250-seat iMax showroom that supports all of this, such as restaurants and a gift shop, in addition to a 2,000 square meter sailing dock that displays seven sailing ships representing Traditional ships in Kuwait and the Arab Gulf region
The three Kuwait Towers: 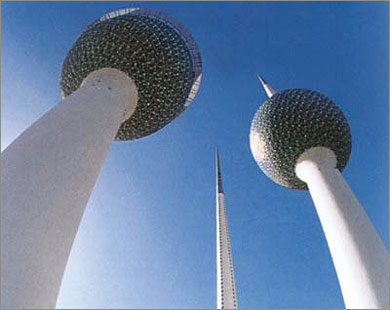 It is one of the most prominent cultural and leisure landmarks in Kuwait, and one can eat and drink at the top of the main tower. It is worth noting that the towers were officially opened in 1979.
And the height of the main tower reaches 187 meters, and it consists of a supreme ball, which is a revealing ball, and a full circle revolves around itself every half an hour, informing visitors of the views of Kuwait. The tower also contains two express elevators to transport visitors from the ground to the revealing ball at a height of 133 meters in 35 seconds.
As for the middle tower, it is a water tank with a height of 147 meters and a capacity of one million gallons of cubic meters. The smaller tower is intended to control the electricity of Kuwait and its suburbs, and its height is 113 meters.
Liberation Tower: 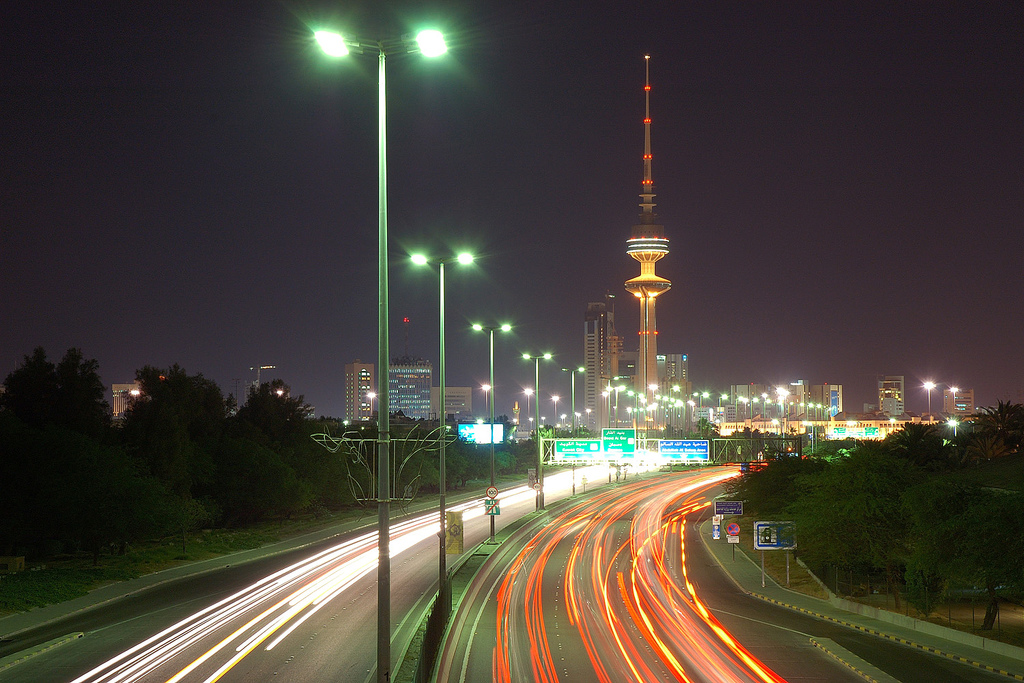 It was officially opened in 1996 in the center of Kuwait City, and it occupies an area of ​​(21) thousand square meters, which is the communications tower, and it rises (372) meters from the surface of the earth and is considered the fourth highest tower in the world.
Other tourist attractions. .
There are many historical monuments in Kuwait, including a section including the National Museum of Kuwait, which depicts the customs and traditions of the Kuwaiti people, and the museum is considered a cultural institution that includes
An exhibition of antiquities and plastic arts, as well as the planetarium, which contains some astronomical devices, maps and manuscripts.
And with the museum there is the House of Islamic Antiquities, which is packed with more than 20 thousand rare Islamic artifacts dating back to various Islamic eras from different parts of the Islamic world from Andalusia to India, and the Islamic Antiquities House, launched in 1983, has become one of the pride treasured by Kuwait.
The house’s activity is not limited to displaying only antiques and Islamic monuments inside and outside Kuwait, but the house has already turned into a cultural institution that includes accompanying and ongoing activities such as holding seminars, giving lectures and providing specialized studies and research.
And unlike the National Museum of Kuwait, there is the Scientific Museum, which uses the fiberglass material in mummification of birds and various animals, and contains rare marine and wild creatures and many forms of plants and scientific models for the latest inventions.

Among the important monuments of Kuwait are the Folklore Center, which is an important bastion for preserving Kuwaiti folklore arts, and Sadu House, which is concerned with preserving heritage.
Sadu (knitting wool) is considered one of the oldest traditional arts and crafts among the people of the Badia in Kuwait and the Arabian Peninsula, and because it is a handy craft of a utilitarian nature benefiting Bedouin women in making poetry, rugs and other types of furnishings. . The house aims to develop these traditional traditional crafts and save them from extinction and spread awareness of their importance and market their products through holding exhibitions inside and outside Kuwait. There is the Tariq Rajab Museum, which includes rare Qurans, Islamic pottery, gold and silver jewelry, metalwork, embroidery, and old Arab costumes.

A family trip to the Danish capital “Copenhagen”