The most prominent landmarks of Thailand

Over the years, Thailand has become one of the most important tourist destinations in the world, as it combines picturesque nature and ancient traditions, in addition to the most beautiful landmarks such as floating markets, major Buddhist temples, ancient palaces and many natural parks, and we have prepared for you a list of the most important landmarks of Thailand that you must not miss to visit .

With its soft white sand and calm waters, Railay Beach is one of the most beautiful beaches in the world. Surrounded by high rocky slopes, it is only accessible by boat, but it gives its visitors the opportunity to engage in many enjoyable activities such as rock climbing, long walks, boating, canoeing, snorkeling, diving in the depths of the ocean, etc. It is worth noting that Railay Beach frequently tops travel magazine covers and tourist brochures. 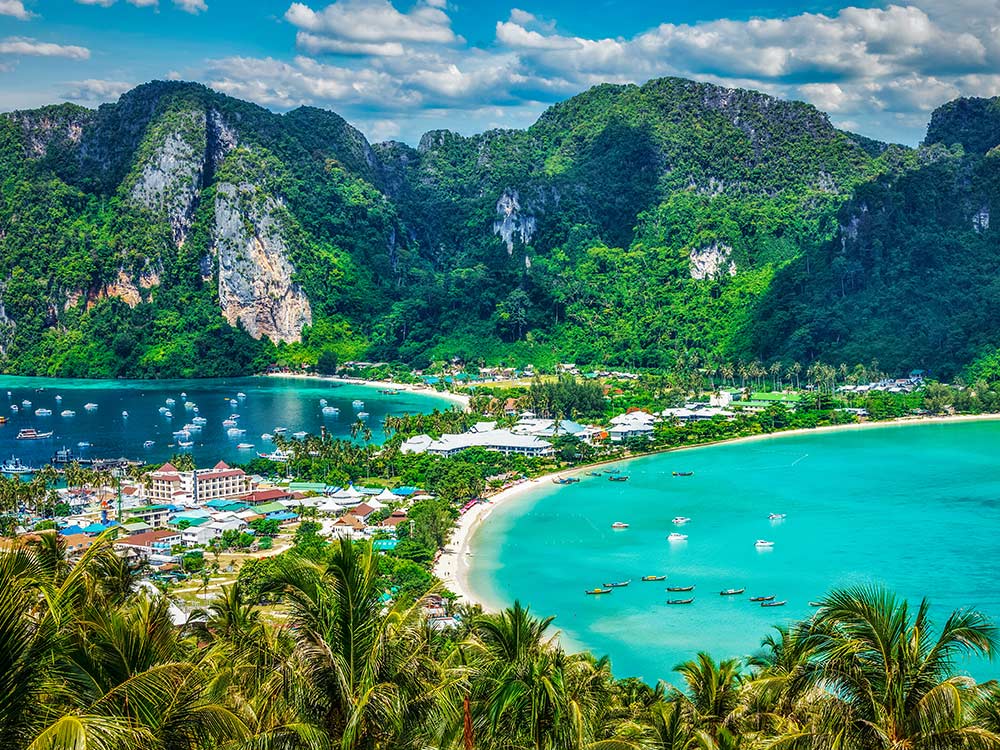 Ko Phi Phi Island gained wide popularity after the success of the movie “The Beach” starring Hollywood star Leonardo DiCaprio, but it was hit by a tsunami in December 2006, which destroyed many of its features. However, this beautiful island managed in recent years to restore its tourism activity and has become one of the most important festive destinations in Thailand.

Ko Larn Island, 7.5 km from Pattaya Coast, is a tropical haven filled with greenery and surrounded by the blue waters of the Indian Ocean. It can practice multiple sports such as water biking, snorkeling, diving, windsurfing and more. And don’t miss the “Khao Nom” hill, the Air Wheels Hill, the statue and the Guan Yin Temple, especially since they all offer stunning panoramic views of the island and its surroundings. 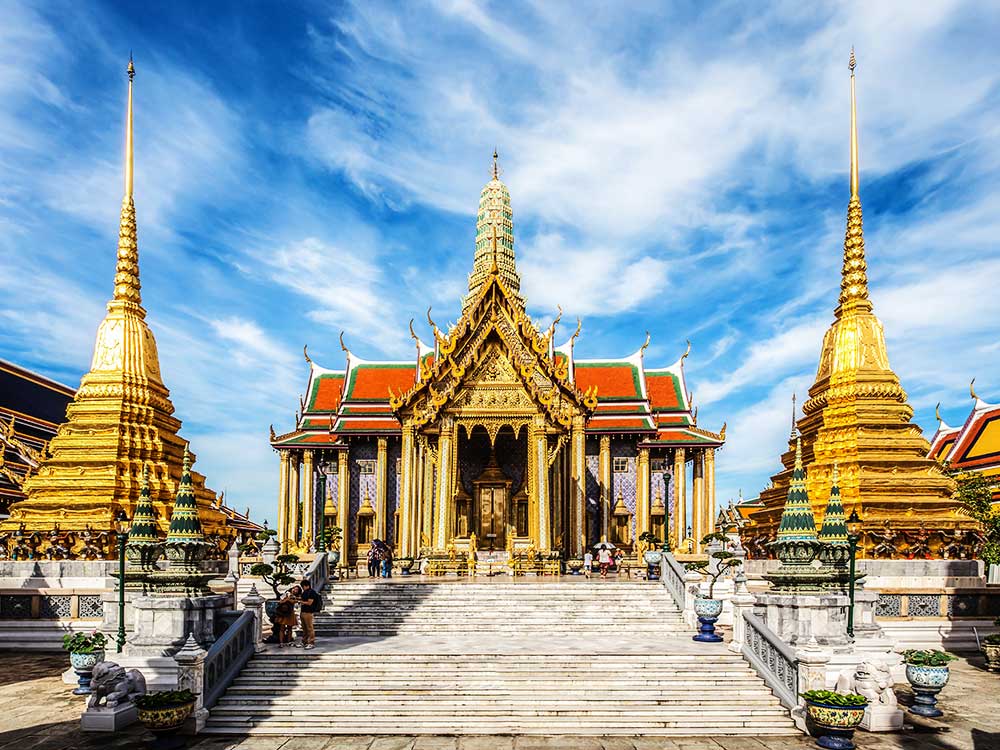 The Grand Palace is a spacious complex of royal buildings located in Bangkok, the capital of Thailand, and construction began in 1782 and inhabited by the royal family until 1925. Today, official events are held and it is famous for containing the Temple of the Emerald Buddha known as the “Wat Phra Kaew”, which is one of the The largest temples around the country and the most prominent tourist attractions. 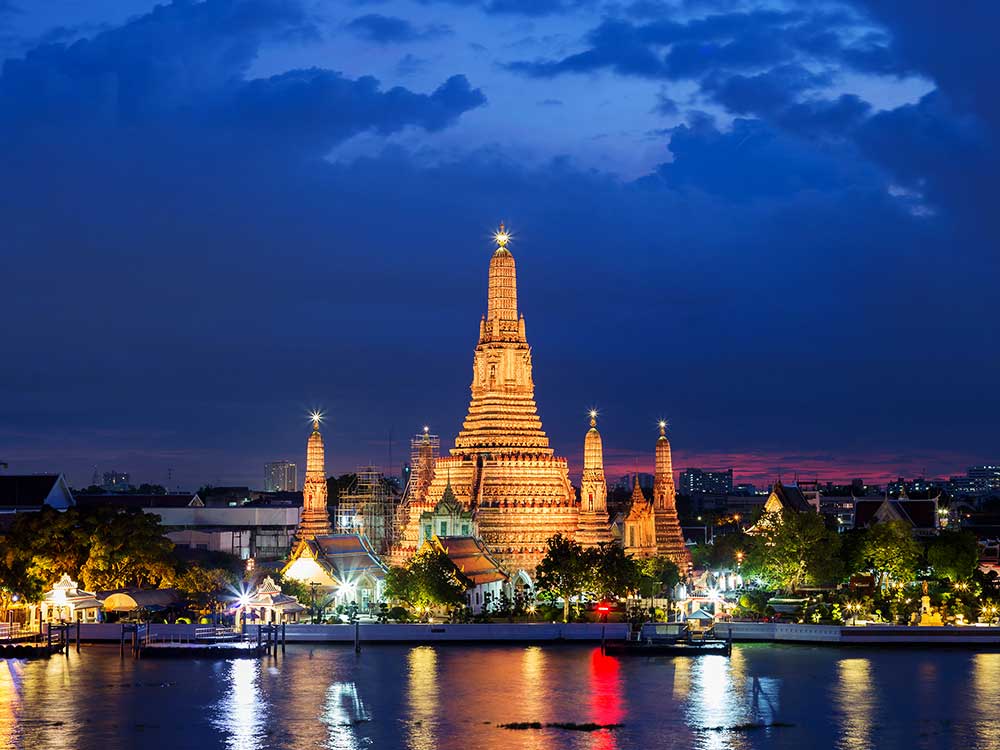 Bangkok is famous for its temples in which Thailand’s ancient culture, traditions and aesthetic aspects stand out. Among these temples are the Temple of the Reclining Buddha known locally as “Wat Pho” which was established in 1788, that is, before the city of Bangkok itself. The statue of the Temple of Dawn (or “Wat Arun”) is one of the most famous landmarks of the city, and is located on the banks of the Chao Phraya River, and it appears in its most beautiful image at night when all its lights are lit. 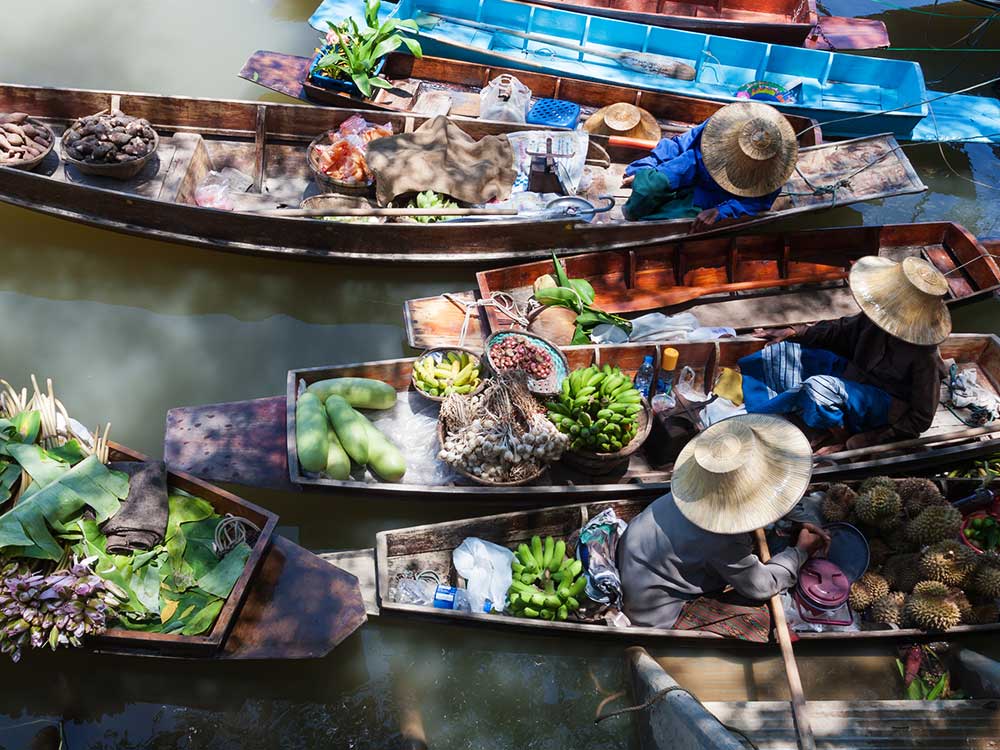 The Damnoen Saduak Floating Market is one of the most important landmarks in Thailand, located a two-hour drive from Bangkok, showing the richness of Thailand’s culture, traditions and lifestyle. It is a rich and varied marketplace, in which residents sell vegetables, fruit, souvenirs and ornaments on traditional boats, in an experience you will never find anywhere else. 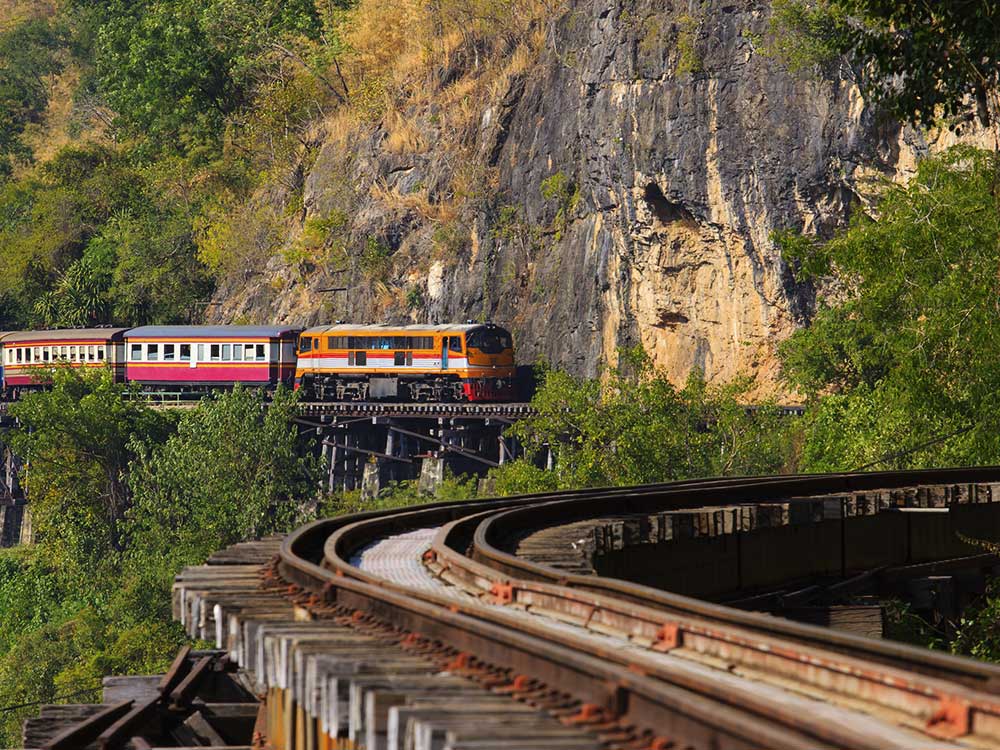 The railway linking Thailand and Myanmar is known as the “death rail”, and its origins date back to World War II. She gained her fame due to the huge number of prisoners of war and citizens who died while working to complete it during the Japanese occupation of Myanmar, and this story appeared in the American movie “The Bridge on the River Kwai” (adapted from a book written by Pierre). Paul. 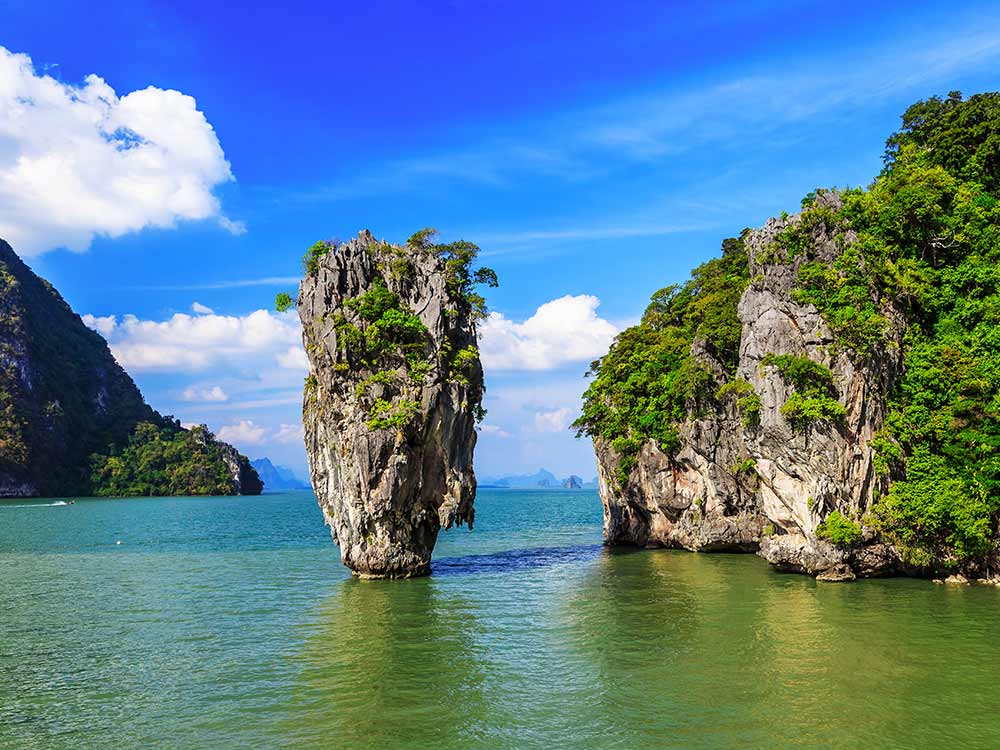 Fang Nga Bay is located north of Phuket, and it takes 45 minutes by car to reach there. You will find Fang Nga Bay National Park, which includes hundreds of limestone cliffs above the Indian Ocean waters. Be sure to visit the famous James Bond island that appeared in the movie “The Man with the Golden Gun”. You can also visit small fishing villages built on wooden beams, eat fresh seafood or go on a cruise and hope for the splendor of clear water. 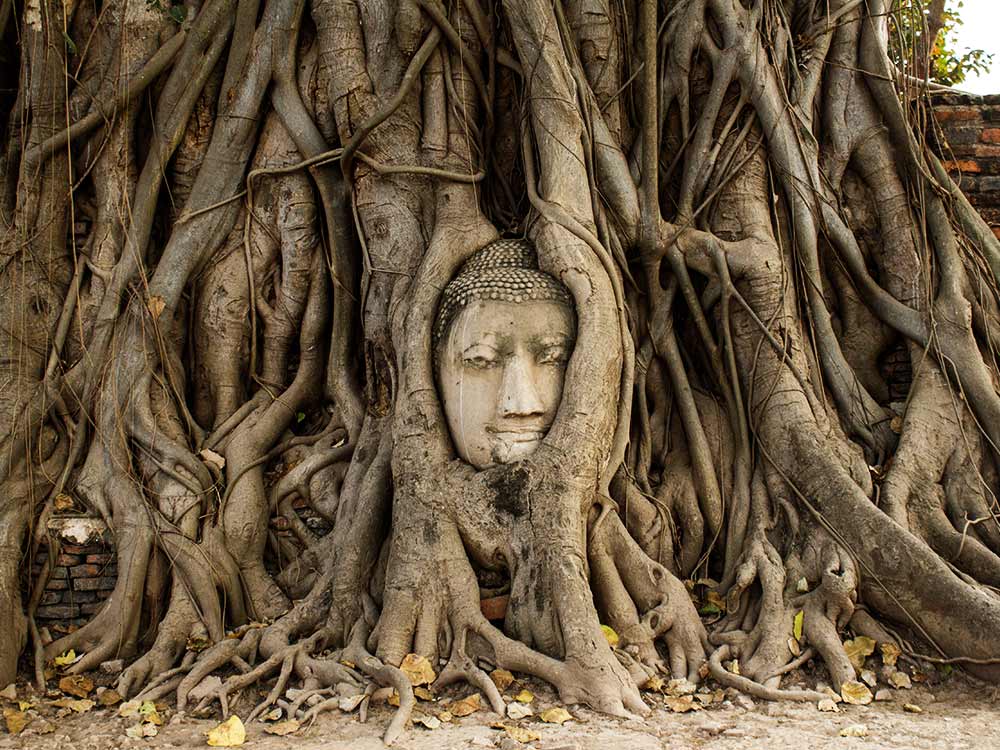 Ayutthaya was built in the year 1350. It was previously the capital of the Ayutthaya Thai Province, and has been designated by UNESCO as a World Heritage Site. This ancient city still tells a lot about the ancient history of Thailand, and is famous for the representation of the Buddha’s head located in the trunk of a tree. Ayutthaya was once full of golden statues, great temples, and palaces built to be looted and destroyed by Burmese forces in the eighteenth century.

The island of Ko Samui is famous for its beautiful landscapes, beautiful beaches, coral reefs and coconut groves, and attracts millions of tourists annually thanks to its wonderful celebrations, hotels and tropical forests that are worth exploring.