The most prominent places of tourism in Greece, Santorini Island

In our article today, we will address a topic on tourism in Greece, Santorini Island, that famous island located on the Aegean Sea in southeastern Greece, has been classified as one of the most beautiful and important tourist places in Greece and the entire world, which is witnessing a great demand from tourists, given that it is packed with historical and tourist attractions In addition to that it contains wonderful natural scenery, including its beautiful beaches with clear blue water, in addition to that it is full of hotels, clubs and shops, and in this article in the Arab travelers we will present to you a guide for entertainment and tourism in Santorini Greece.

It is one of the most important places of tourism on the island, and this name was given to it because it is located among the red volcanic rocks, which made its sand color in red, and the red beach witnesses a great demand in the seasons of tourism, as the beach is famous for the spread of fruit sellers on its sides. 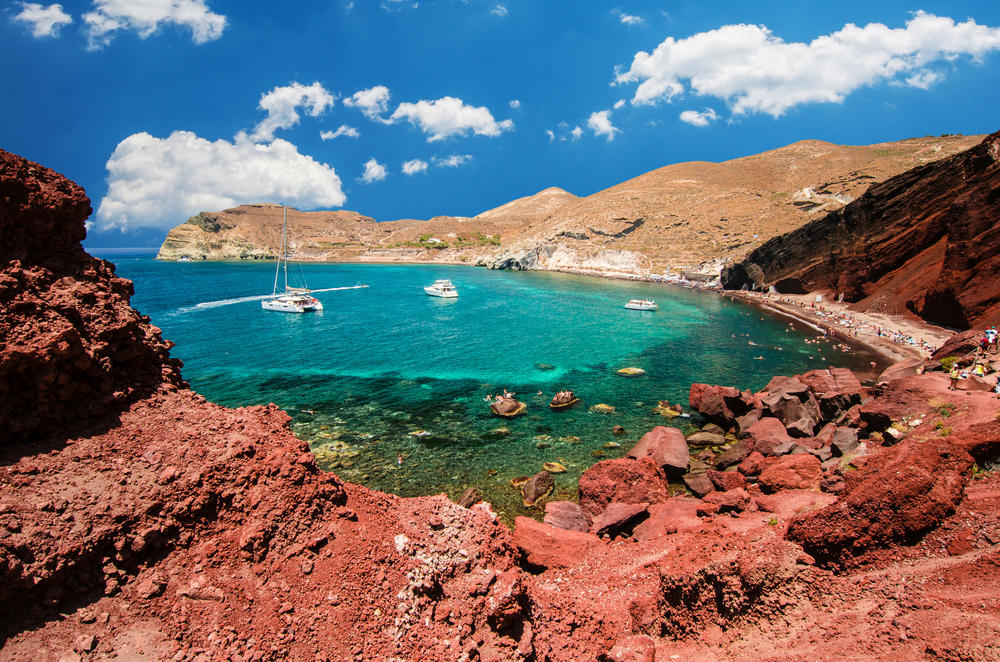 Kamari Beach is one of the most famous beaches of the island, and it is famous for containing the giant rock Mesa Funa, in addition to its sand in black color, and the visitor can wander around the beach at any time and enjoy the beautiful scenery. 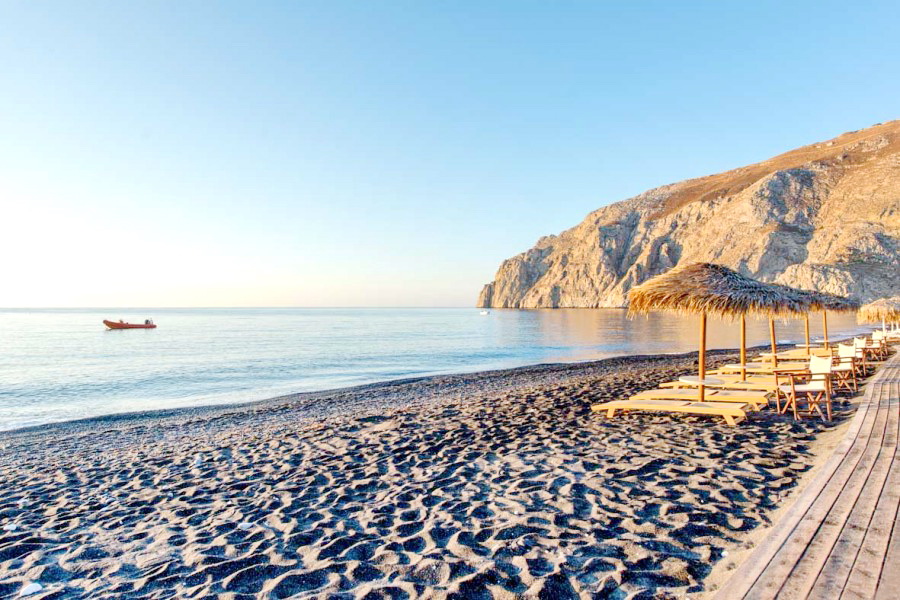 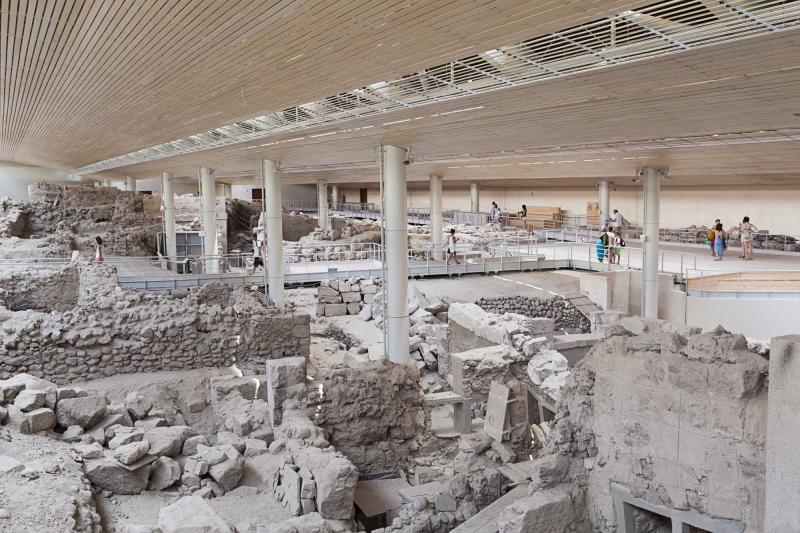 The city of Fira

The origin of the city of Fira is due to the volcanic activity that formed thousands of years ago, so the city has become churches with blue domes and white square houses built on the terraces located on the crater.
Thanks to its beautiful white buildings, the city of Fira is considered one of the most magnificent places of tourism on the island, you will not find its narrow streets except paved with distinctive white pebbles which gives it an impressive look, and when the visitor ascends to a high place in the city, he can enjoy wonderful panoramic and natural scenes of the sea and buildings This city, as he can visit the ancient churches in it. 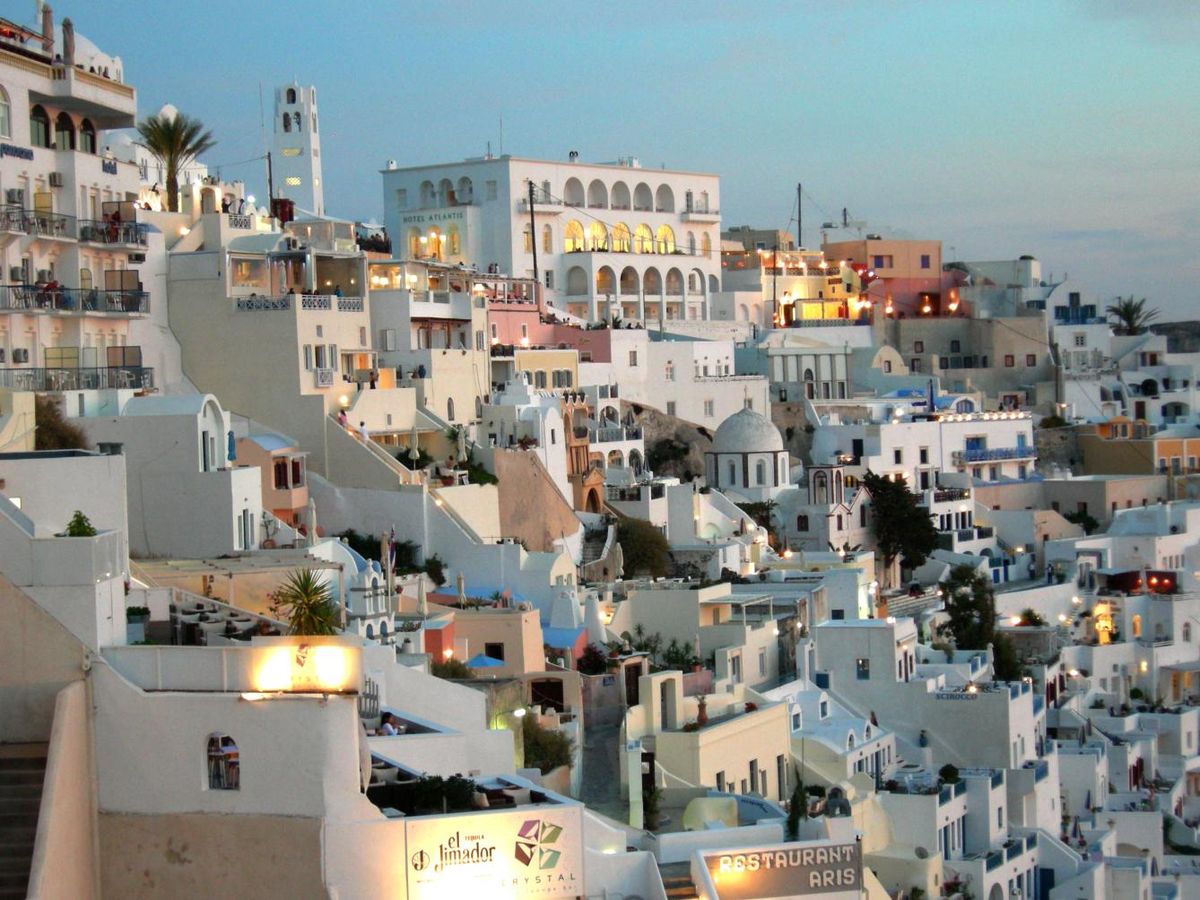 The town of Oia

For those who enjoy watching the beautiful sunset views, they can go to the town of Oia, in which most of the white houses have been converted into beautiful small hotels, and the town is famous for its winding paths in addition to its delicious seafood, and the town has beautiful paintings, as a result of the reflection of the red sun on the buildings in it , Which adds a wonderful romantic look that attracts a lot, in addition to the town is characterized by simple houses and delicate colors and a line of colorful and beautiful flower arrangements in front of each house, which can be accessed to the beach through the paved stairs leading to it. 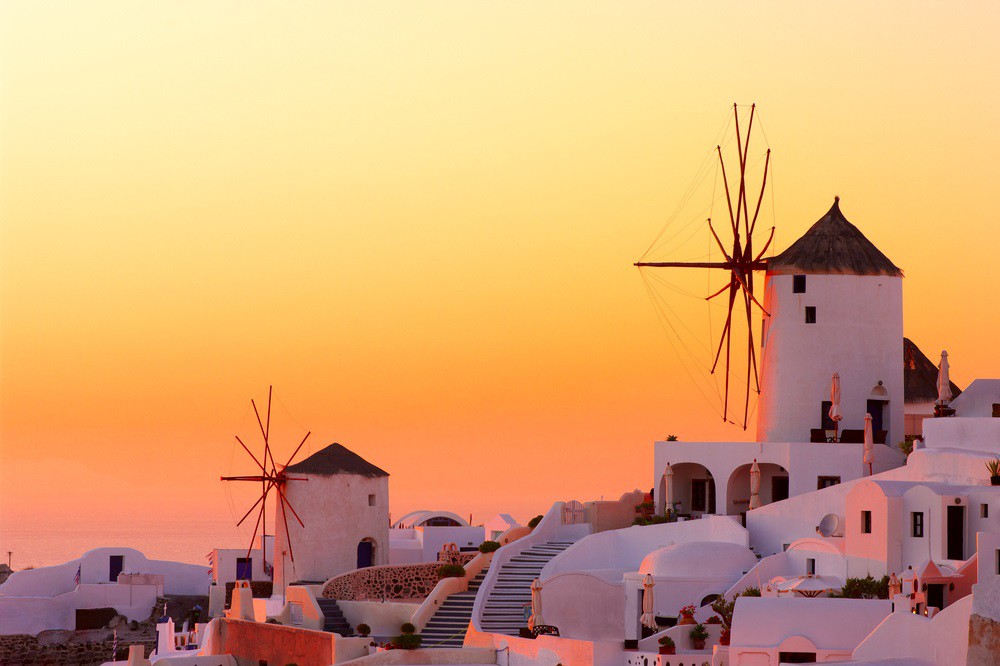 It is the crater of the volcano that blew up the island thousands of years ago, and it contains hot springs that are very impressive, in addition to being filled with sea water, which enables visitors to enjoy swimming and boat trips in it. 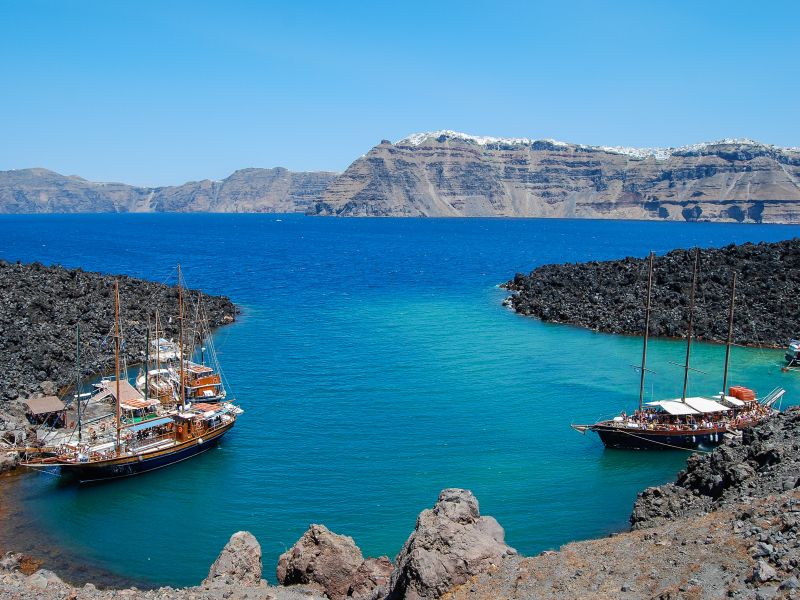 The ancient village of Thira

The history of this village dates back to the ninth century BC, and it contains Byzantine buildings, Roman structures, ruins and monuments of Greek temples, and the visitor can know the history of the island through its museum, which was built in the open air and contains discoveries of great civilizations dating back to BC, in addition to Figurines from ceramics, marble, and historical art from the Akrotiri civilization. 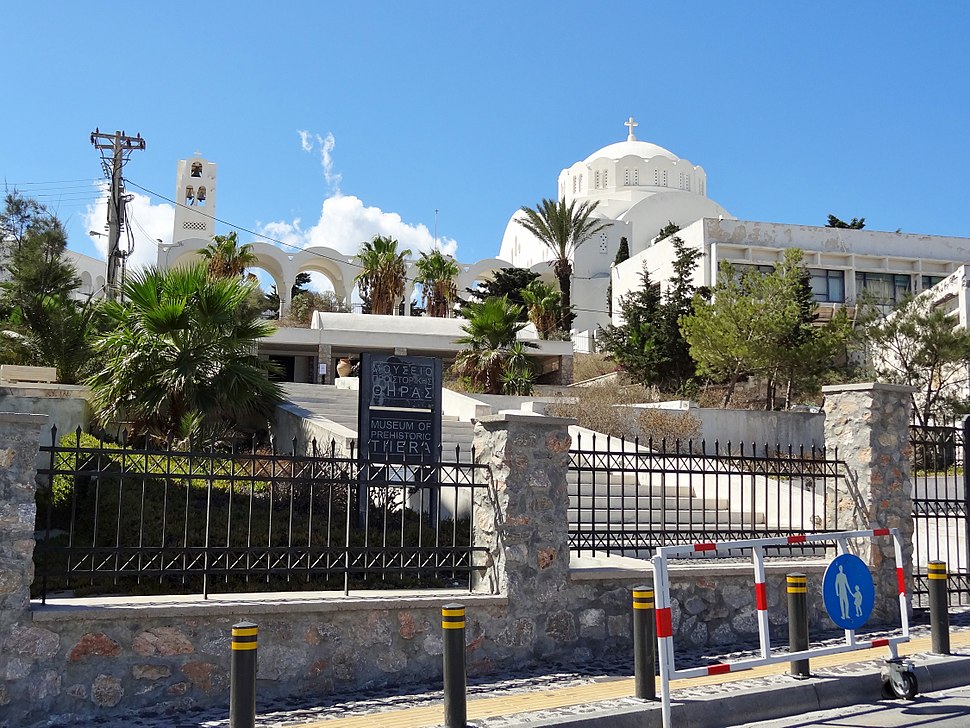 Among the most important tourist attractions on the island, the monastery includes a museum that displays the history of secret schools during the Turkish period, along with a display of the history of Patriarch Gregory V who was executed by the Turks, and one of the features of the monastery is that it is permanently open to the public. 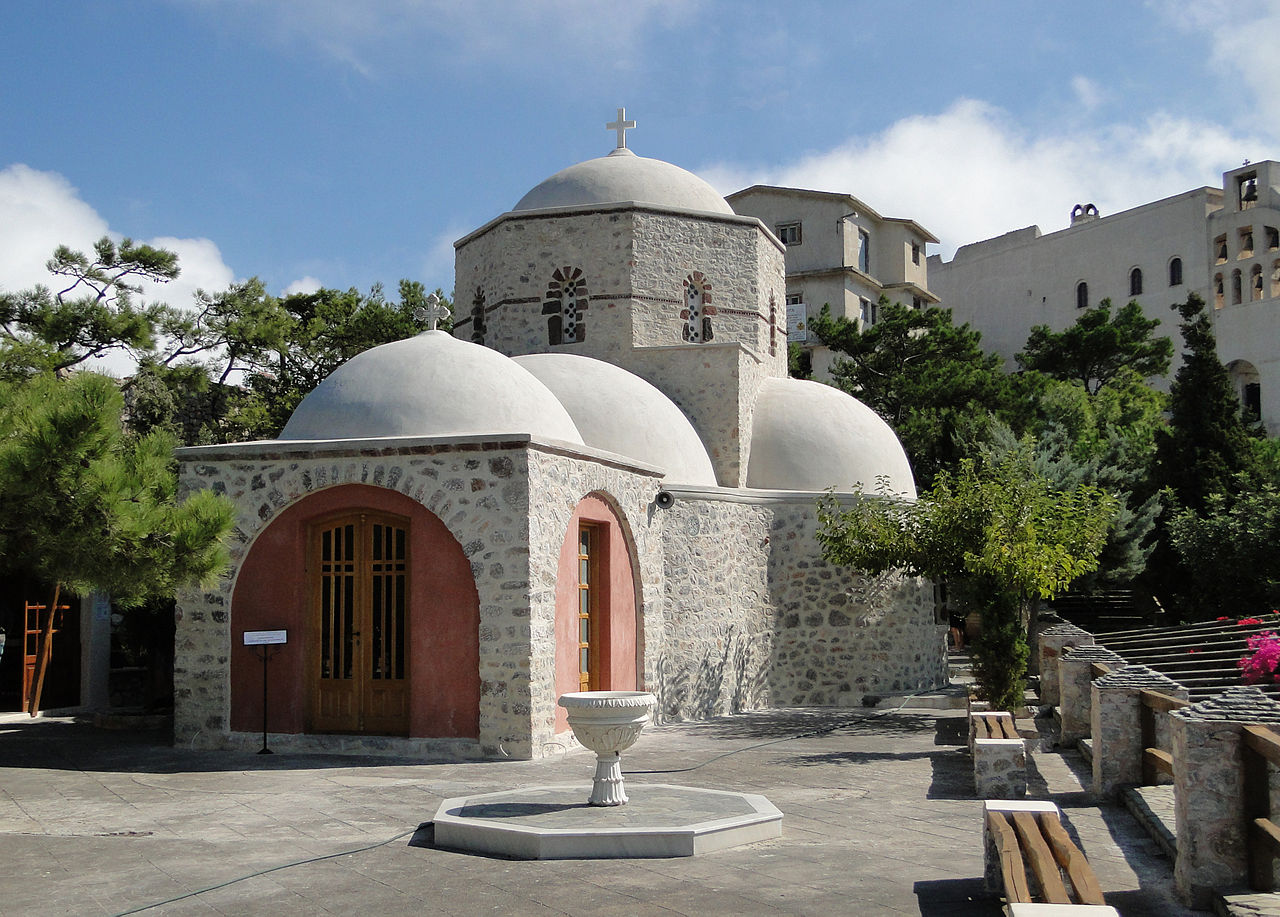