7 of the best Hurghada resorts 2022 recommended

The most beautiful tourist resorts in the Maldives

Report on the Cortina Hotel Munich

Get to know Colorado and its wooden cabins

Information on the Museum of mini Egypt

Those wishing to tourism in the Czech Republic are satisfied with visiting only major cities, such as Prague and Brno, and do not mean only famous tourist and historical sights, and many miss themselves many wonderful cities, all of which witnessed the most exciting eras of history, which also has a rich culture in addition to a picturesque nature. In this article, we show you the most beautiful tourism cities in the Czech Republic. 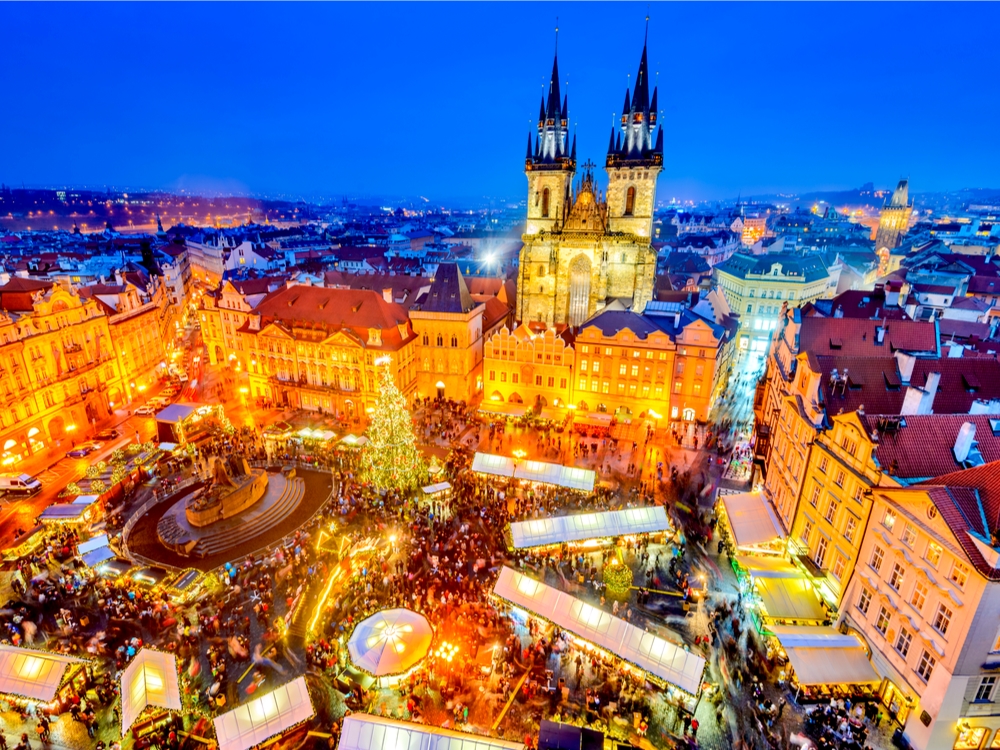 Prague Old Town Square
The Golden City, the capital of the Czech Republic and its largest city, is located in the center of the historical district of Bohemia on the Vltava River, the longest river in the country. The city abounds to this day a lot of the charm of the ancient world, being home to a number of well-known cultural monuments, many of which survived the destruction witnessed by Europe in the twentieth century, as the city was not destroyed in World War II unlike many of the cities of Central Europe, and it includes areas The main attraction in the city is Prague Castle, Karl Bridge and Old Town Square, which contributed to the inclusion of Prague Historic Center in the UNESCO list of World Heritage Sites. Prague is also famous for its towers that stand tall over its churches and Baroque palaces, and remains a city for all seasons.

Read:What is the capital of Yemen before Sanaa? 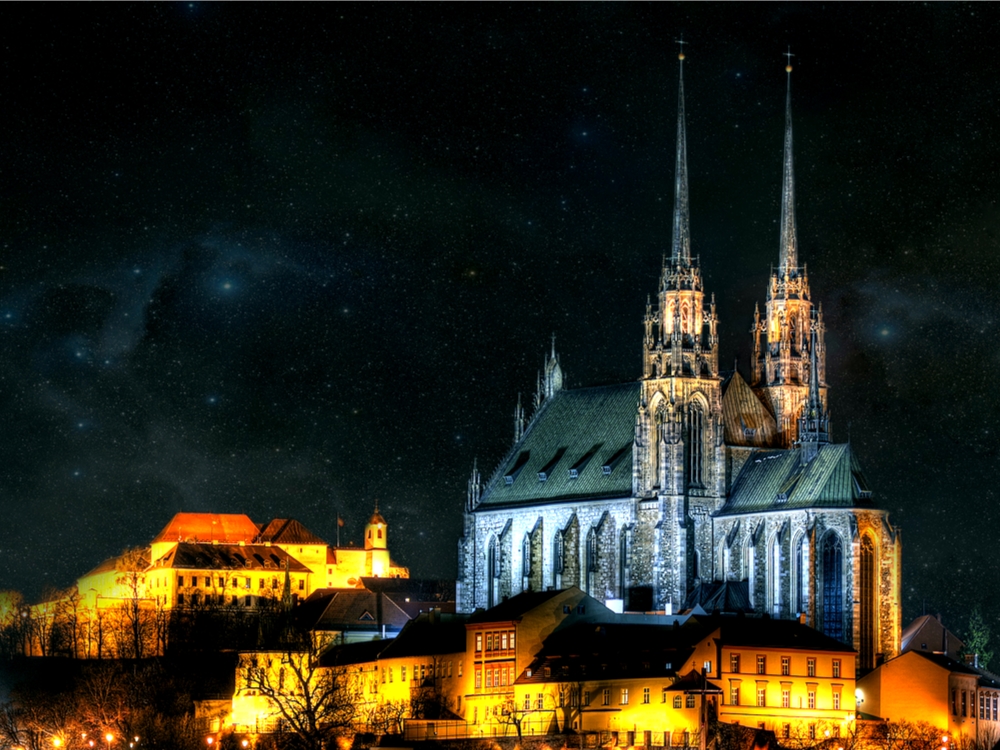 The famous Spielberk Castle in Brno
The cultural capital of Moravia is a city with a scholarly nature, famous for its prestigious exhibition city. This city has witnessed a remarkable prosperity since leaving the socialist system, as it knew a large number of restorations that changed the face of the city greatly, but it is still characterized by attractive architectural buildings dating back to the Baroque and Gothic era. Among the most important tourist attractions in Brno, the silent kingdom of death, which are catacombs of the dead under the Church of St. James, with 50 thousand human bones, and there is also the Castle of Spielbruck, which was built in the thirteenth century. 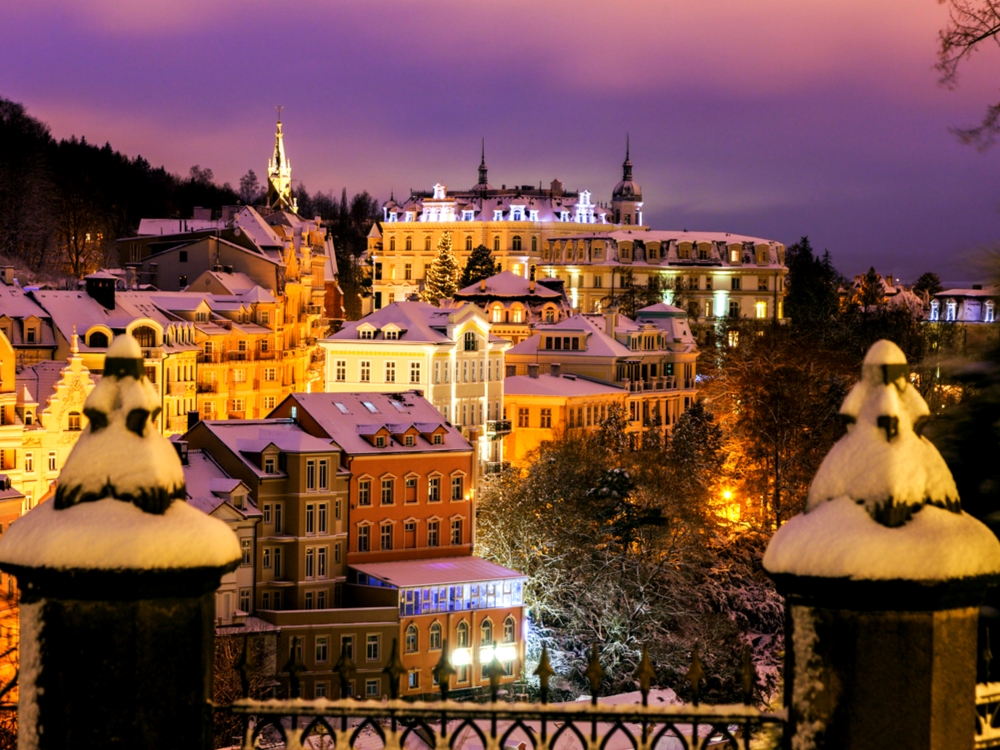 Karlovy Vary in the winter
It is located to the west of Bohemia, about 130 km from Prague, from which the Alawr River passes, and it was named after the King of Bohemia and the Romen Empire Karl IV who built it in 1370, and this city is famous for its mineral springs, which include 12 of them located among the captivating natural scenes, and is considered one of the most important destinations for physical therapy In the country, and indeed one of the most beautiful spa resorts in the world, and it is also full of colorful and distinctive architecture, all of which make Karlovy Vary one of the important cities for those looking to tourism in the Czech Republic. 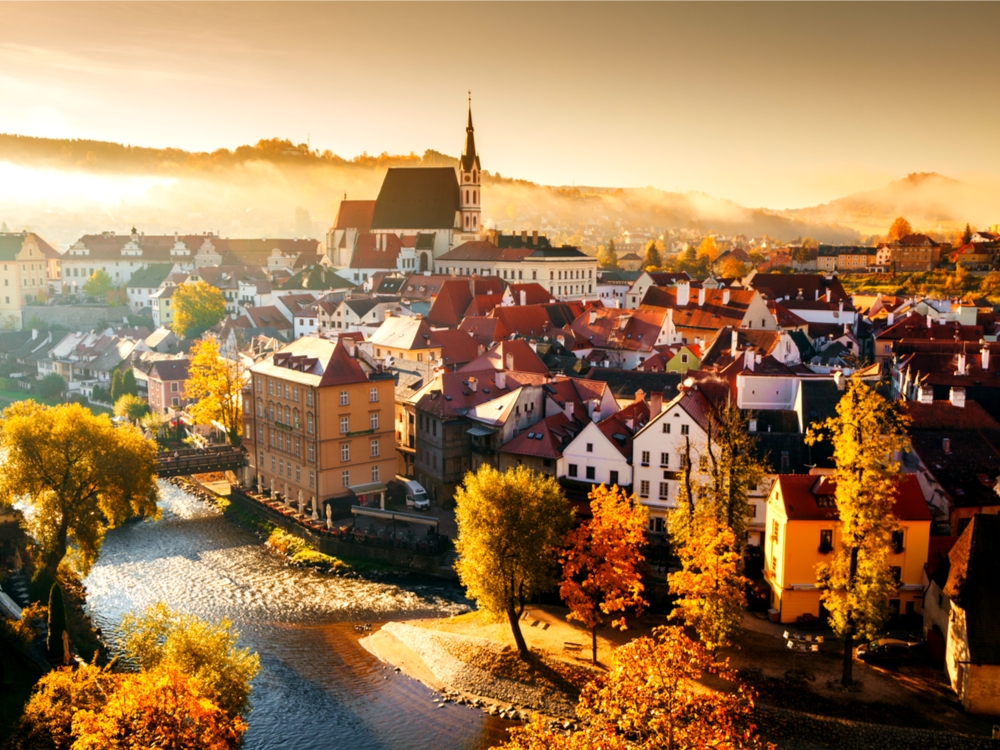 It is one of the most beautiful tourist destinations in the Czech Republic and is a city suitable for honeymooning, due to its romantic nature, and is famous for the Egon Shell Art Center located in the town of Holesovice. Cesky Krumlov remains one of the best preserved medieval cities in Europe, as one of the most important tourist places in the old town, which includes landmarks dating back to those times. The city’s construction dates back to the mid-13th century on the slopes around a Gothic castle built by the Bohemian nobles, until aristocratic settlers expanded the castle and combined the elements of the Renaissance and Baroque era, which today constitute the largest complex of castles in the middle of the continent, 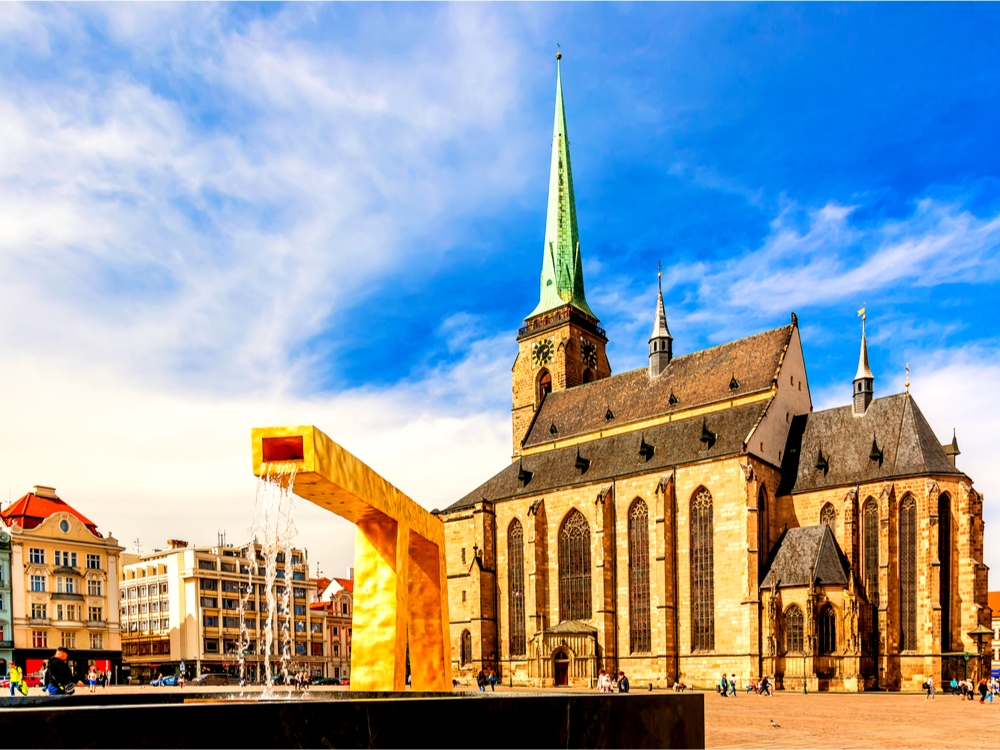 St. Bartholomew’s Cathedral in Plzen
It is located in Western Bohemia at the confluence of the Mezzi, Radbosa, Uhlava and Slava rivers that converge to the Peronka River. Plzen, and in particular the old quarter, is filled with historical buildings constructed in Baroque architecture with exquisite decoration, which appeared in it in the late seventeenth century. The city contains the dinosaur park famous as the Dino Park Plzen, and the highest church in the country is St. Bartholomew’s Cathedral, which remains one of the most important tourist attractions in the Czech Republic. 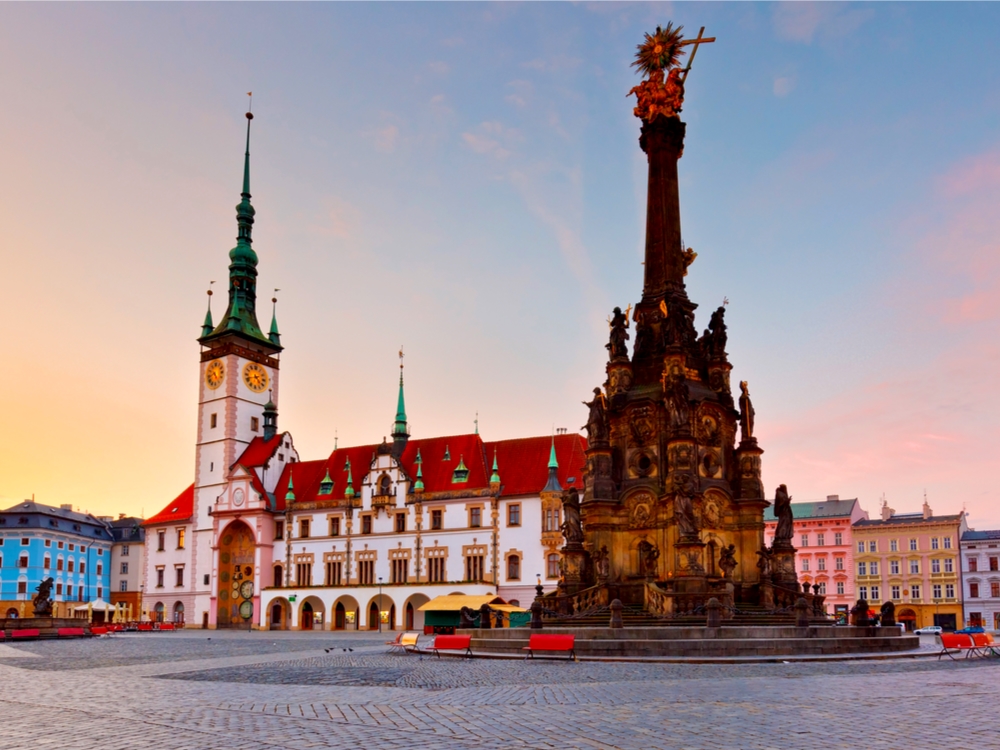 Pillar of the Holy Trinity in Olomouc
Located in the east of the country in the historical Moravia region on the banks of the Morava River, and blessed with an ancient town whose features have been preserved, and boasts the presence of many churches with wonderful designs and decor, such as the Basilica Minor Church, and also includes many of the most important tourist attractions in the Czech Republic, most notably each of the castle With the city’s name, the 35-meter high Holy Trinity Column listed on the UNESCO World Heritage List, an astronomical clock which is one of only two in the Czech Republic, as well as the St. Moritz Church built in the style of Gothic architecture. 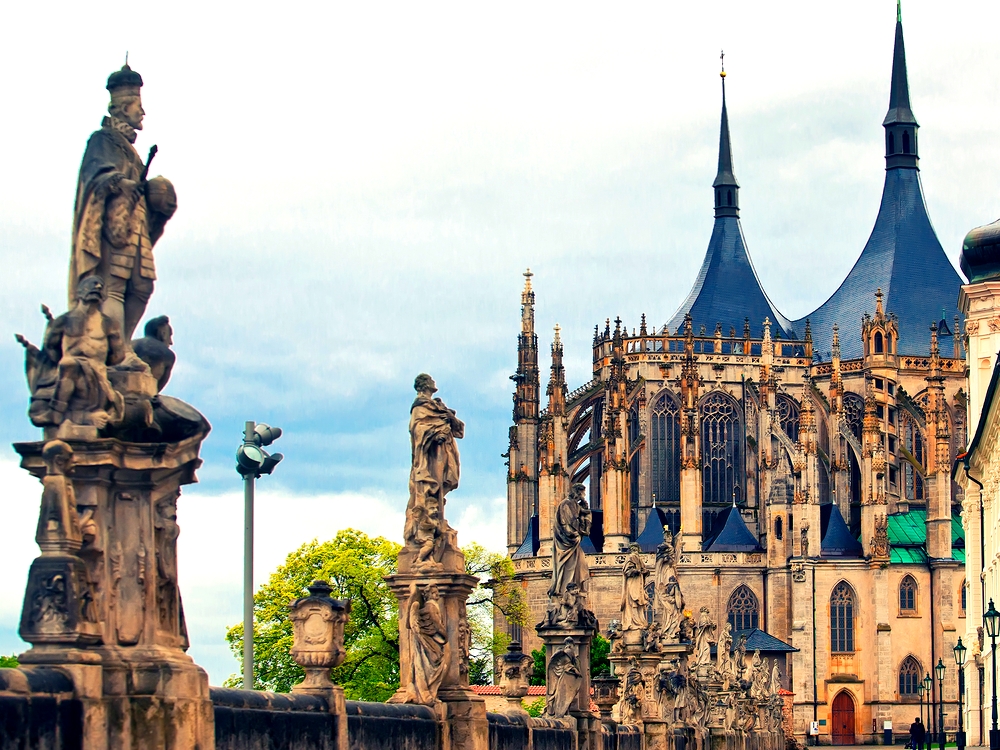 St. Barbara Church in Kutna Hora
It is a town located in the Central Bohemian region, 71 km east of Prague, unique for its distinctive architecture, and it is one of the most important tourist destinations in the Czech Republic, among the most prominent landmarks is the Church of Santa Barbara, which embodies a masterpiece of Gothic architecture, and the archaeological church of Sidlik restored according to the Baroque style where you can Visitors see a curious masterpiece of human bones. This city originally originated from the exploitation of silver mining and mining, where to this day it is possible to visit the Silver Museum, which includes a silver mine. 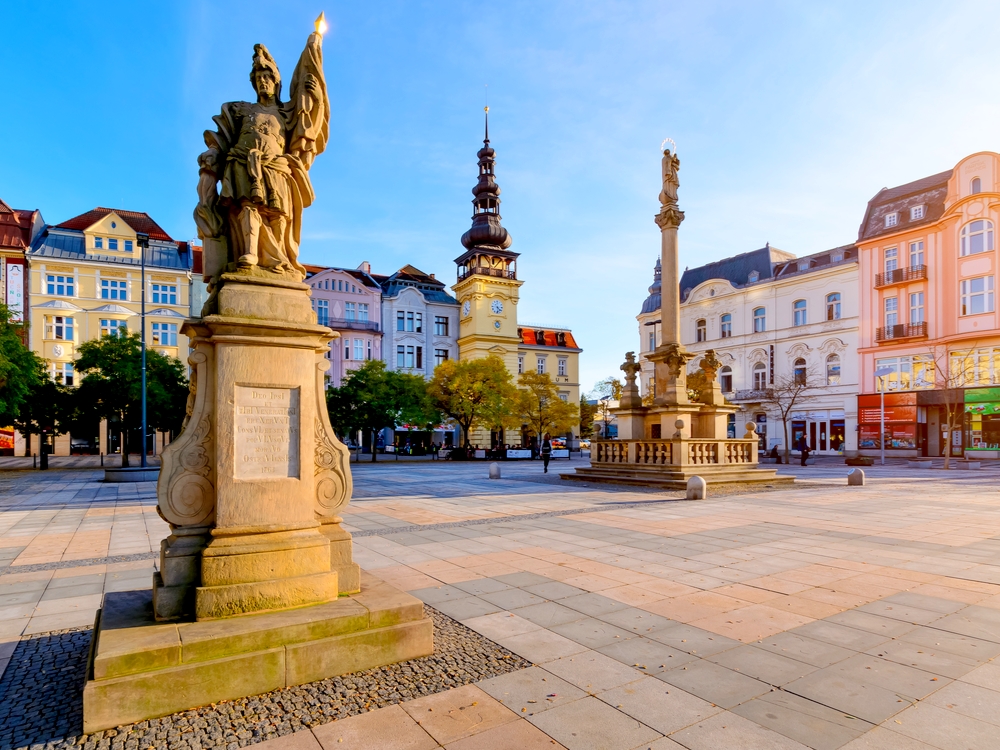 A city located on the intersection of the Oder River with the Opava and Ostravis rivers, its history was influenced by the discovery of high-quality coal mines, which gave it the title of Iron Heart of the Czechs, and although coal mining ended in the mid-nineties, the city continues to benefit from this past, as it boasts museums and the heritage associated with it The city’s Mining Museum includes a unique collection of mining tools and machines, and Michael’s mine in the city was declared a national cultural landmark in 1995.
Ostrava is also available on many historical areas, which are among the most important tourist attractions in the Czech Republic, such as Ostrava Hall, which is the largest in the country from the inter-war period, as there is the highest tower located at an altitude of 85 meters and offers a wonderful view of the city and the Bicicidges mountains and even parts of Poland . 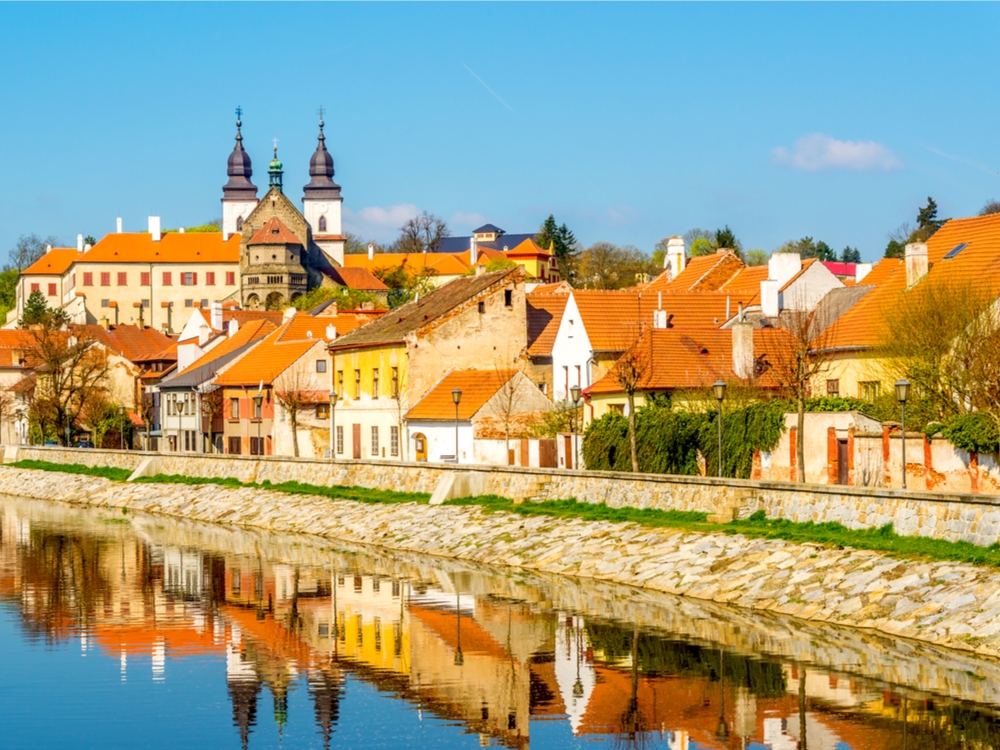 Is a charming city in the region of Vysocna, and one of the most beautiful tourist destinations in the Czech Republic for history lovers, preserves the feeling of the small city because of the surrounding mountains, and is characterized by its calm and buildings of a similar style to the architecture of the German-speaking world, including the city hall and its wonderful ancient palaces. Tribic contains some of the sites included in the list of UNESCO, such as the Church of Prokopios Basilica, in addition to the Jewish Quarter and the cemetery, and it is visited by thousands of tourists annually to visit its ancient neighborhoods. 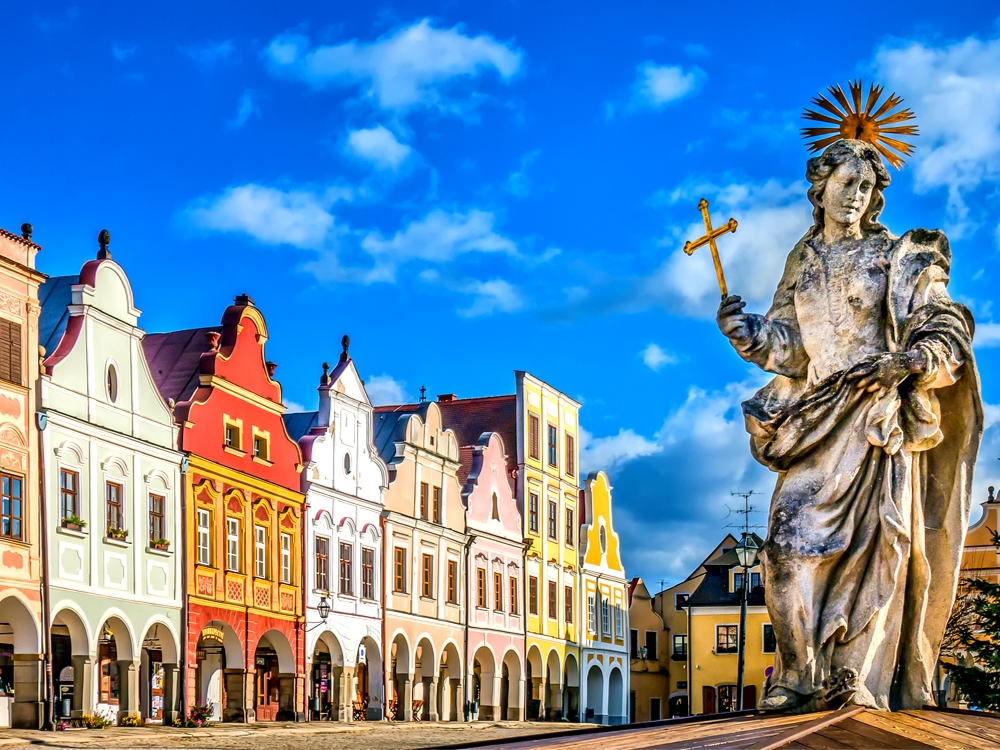 Telk Town Square
It is located in the south of Moravia, and was established as a royal fortress at the crossroads of trade routes between Moravia, Austria and Bohemia, and includes some of the most important tourist attractions in the Czech Republic, such as the city square included in the list of UNESCO World Heritage sites, where colorful Baroque homes, gardens and pools of water surrounding it. Telch is one of the cities of a historical nature, where ancient antique buildings are scattered everywhere, which gives a glimpse of the Middle Ages, such as the historic Gothic Castle Telch that includes its prestigious English-style park.

Are you planning to visit one of these cities? What is the city you wish to visit in the future?

The best Chinese food, including appetizers, main courses and desserts

The effects of Al Moez Street

Where is Katara located in Qatar?