Top 10 things to do in Greece

White sands as far as the eye can see, corridors dug by nature’s hand next to man’s hand in the mountains, olive groves and vineyards, amazing history and breathtaking natural beauty, all in just one small country! Yes, it is Greece that offers you all this and more. No wonder that these countries serve as the dream destination for any photographer with its rich history, breathtaking natural beauty, and countless islands, not to mention the effects of its ancient civilization and its white beaches, all of which makes Greece one of the favorite destinations for tourists in Europe. In addition to its capital, Athens, there are many places and cities rich in charming landscapes, such as “Shiprick Bay”, “Meteora” monasteries and active “Ni Kameni” volcano, “Acropolis” Athens and “Epidaurus” theater, among others. Also, most tourists coming to Greece prefer to go aboard one of the ships to the islands of “Mykonos”, “Santorini”, “Corfu”, “Rhodes” and “Crete”, which are the most popular tourist destinations in Greece and most popular with tourists.
>>> Tourism in Greece
>>> Air Greece

Here we have prepared for you a list of the 10 best activities you can do in different places during your trip to Greece, so that your trip is truly a dream trip. 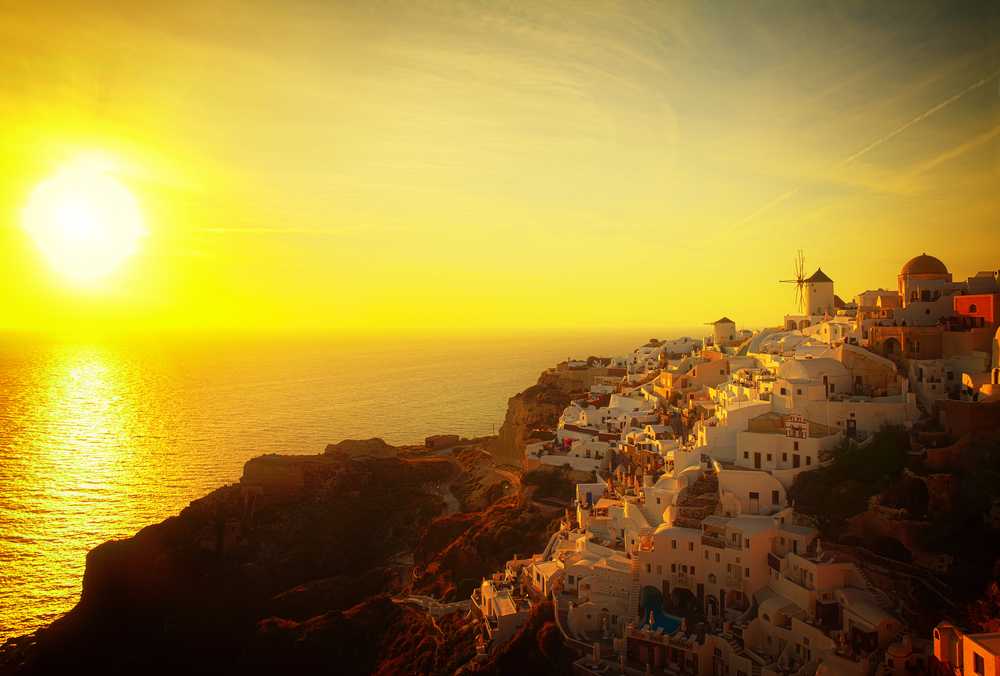 What could be more romantic than relaxing in the warm sunshine with your loved one? Everyone who visited Santorini will tell you before about the magnificence of the legendary sunset scene in the village of “Oia” so you never miss an opportunity to see this legendary sunset, so choose your favorite drink and choose your suitable location to watch, whether on the beach, on a yacht or on a boat in Cruise, let your imagination and feelings unleash the beauty of the sun scene diving between the waves of the sea on the horizon.

2. Enjoy an unforgettable landscape of Shiprick Bay on Zakynthos Island. 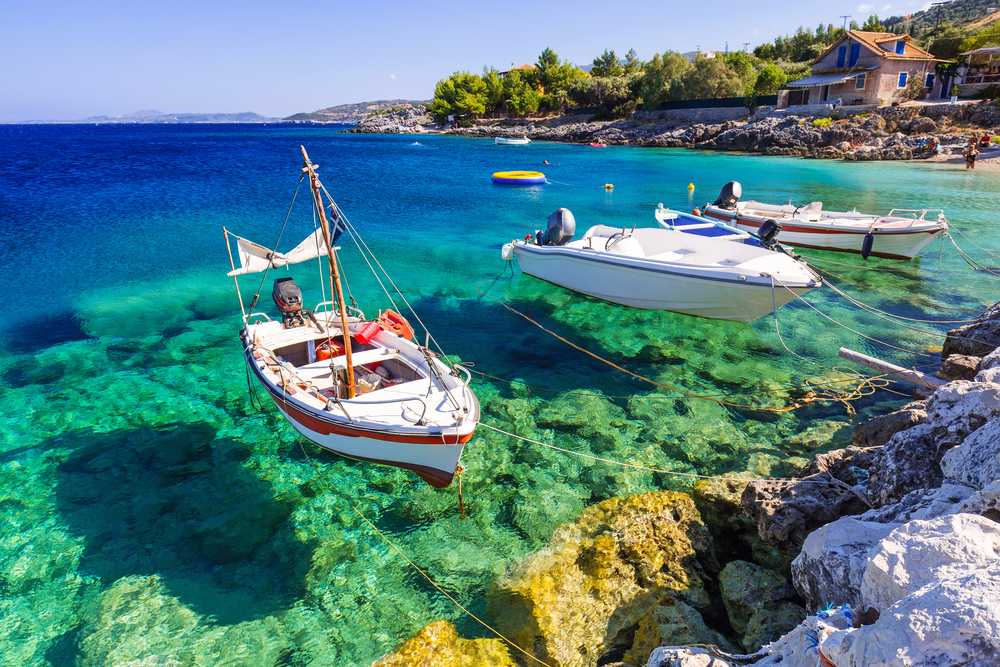 Zakynthos Island is world famous for its pure water beaches and uninterrupted nightlife, and it is one of the most beautiful islands of Greece with its beaches which are among the most beautiful in the world. It offers its visitors a variety of amazing leisure activities, from diving to hiking or swimming in its clear warm waters. A group of white rocky hills surrounds these white sandy beaches of enchanting beauty, creating with them a unique image, which can be said to sum up the natural beauty of Greece in one place.

3. Visit one of the most amazing places in the world – “Meteora” monasteries: 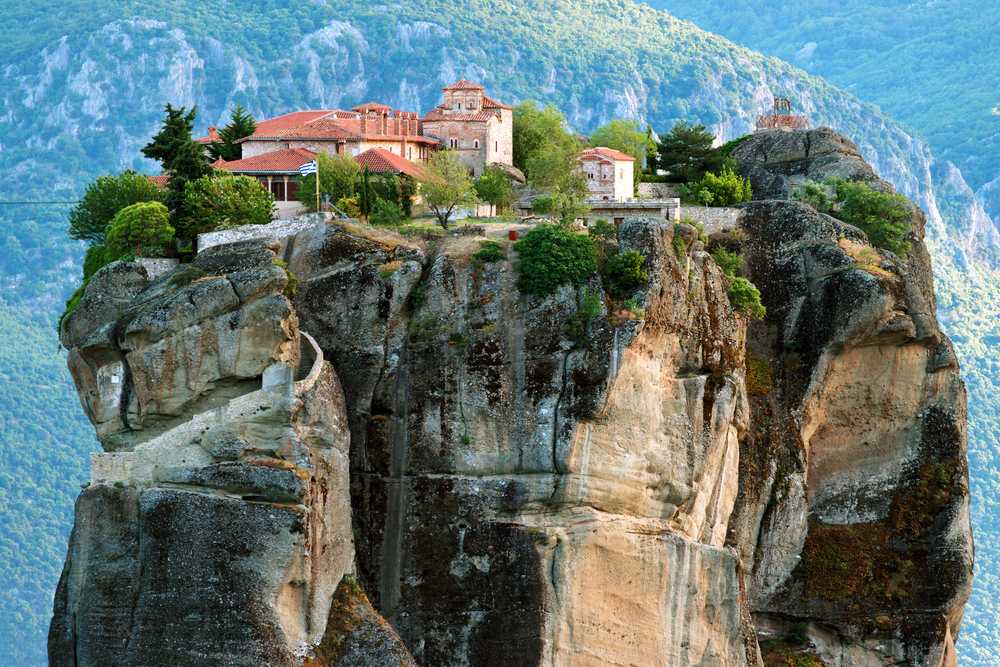 Filled with spirituality, extremely calm, inspired, enormous and impressive. It is these words that are often used when talking about “Meteora” monasteries. These monasteries built of rock enjoy an exquisite architectural composition, and the trip provides a unique experience to explore the masterpieces of nature, along with the beauty of its impressive architectural structure. Not to mention the opportunity to explore dazzling history, along with the eternal human desire to communicate with the Creator.

No trip to Crete is complete without a hike between the passages of the active “Nai Kameni” volcano, whether you are an expert mobile or just wanting to walk and hike, you must visit this place during your trip to Greece. This amazing tour, which is very popular with arrivals to Santorini, provides you with insights into the atmosphere in the Aegean region. The hiking path starts from the “Fira” enamel and runs along the volcanic crater, up to the village of “Oia” and passing through some historical monuments such as the village “Imerovigli” and “Firostefani” on the way. 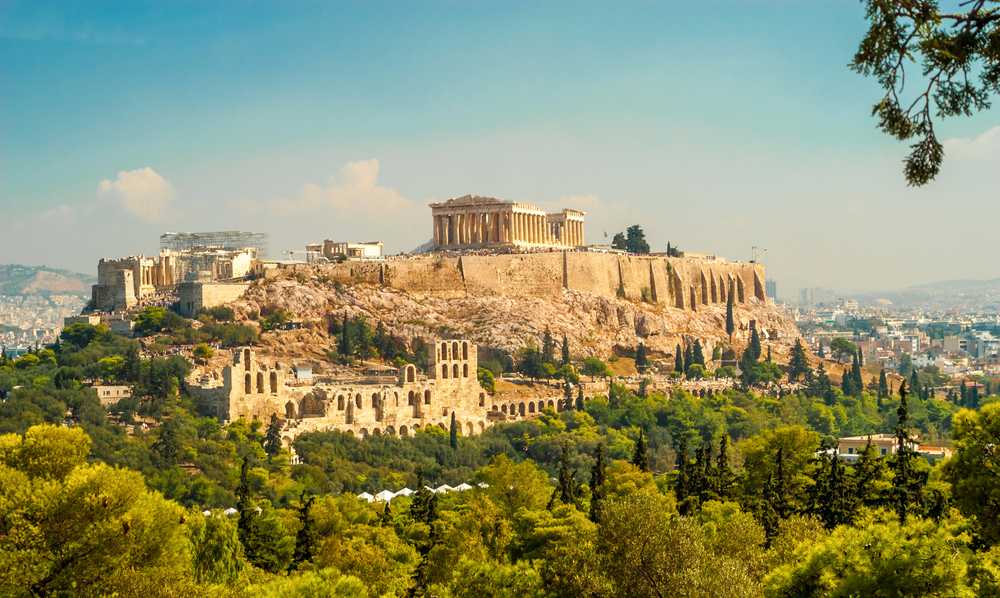 Let’s get a bit tired of Athena’s history, so let’s go back in history to the old days. As the mention of Athena only comes and brings pictures of its timeless archaeological and historical temples. There is no place better than Greece for any lover of history to quench his passion for seeing the ruins. And in the midst of these archeology, we find the Acropolis landmark, which was once called the Parthenon, this majestic edifice which is the best witness to the ancient civilization of this country, which the eye sees from anywhere in Athens. The structure of this edifice consists entirely of marble stones, as it was built to be the seat of a giant statue of Athens, the patron of this city. So be sure not to miss this glamorous scene, and enjoy its beauty whether it glitters in the sun, or when the colorful lights make it more beautiful during the night.

6. Explore the beauty of the Greek islands: 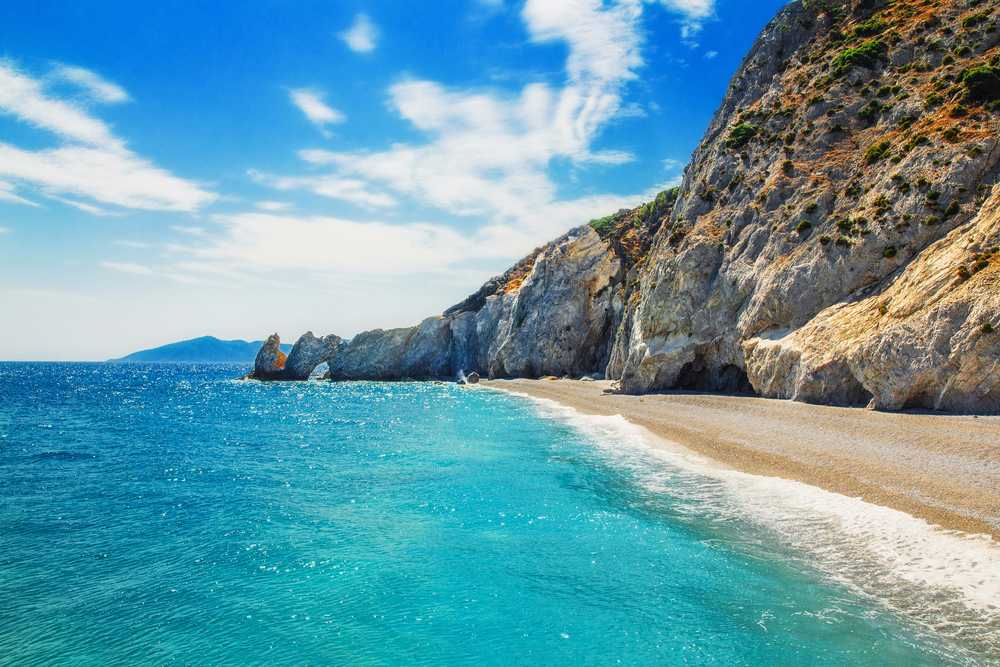 White sand, as far as the eye can see, traces of being proud in the sun, and clear blue water, what might your imagination reach more than this? But this is not a fantasy in the midst of what you will see from the beauty of the Greek islands, such as “Mykonos” and “Santorini” and “Rhodes” and Zakynthos and other islands scattered along more than 1,600 km from the Greek coast. This coast which is replete with many of the most beautiful beaches of the world, such as “Arvanitia”, “Lalaria”, “Santorini” beaches, “Paradise” beach and others Here in Greece you will never have to search for beautiful beaches, as the country is full of various breathtaking beaches that you will find easily here.

7. A look at the Epidaurus Theater: 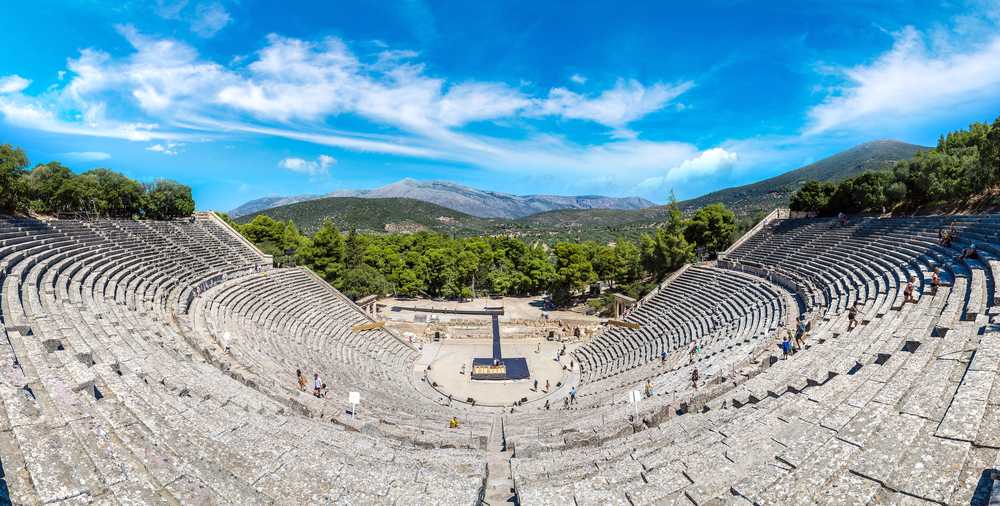 This Greek architectural masterpiece is perhaps the most prominent of the features of ancient Greek civilization and its architecture, which is still tall today. The “Epidaurus” theater is located in one of the small villages, and it is one of the ancient theaters that preserved history and nature and received attention to our time, as it is one of the most prominent monuments and the largest cultural and heritage centers of Greece throughout its history dating back to the fourth century AD. 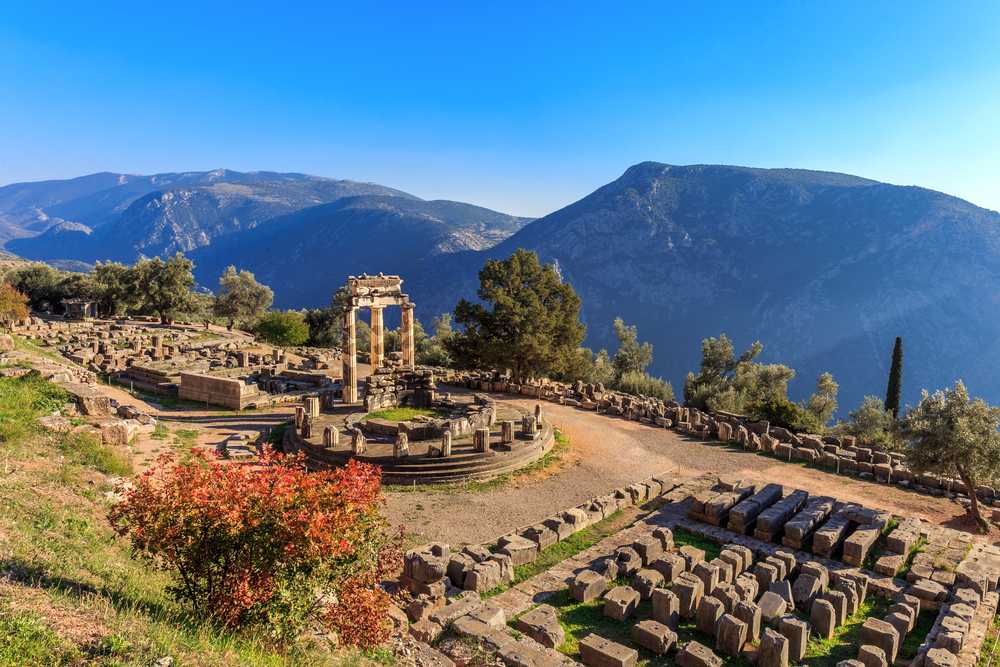 Delphi is situated on the low slopes of Mount Parnassos, and enjoys an impressive view of one of its valleys. One of the most important tourist destinations in Greece, spiritually and historically, the Delphi area, which is listed on the UNESCO List of UNESCO World Heritage Sites, is indispensable for any visitor who loves history during his vacation in Greece. The area includes a number of archaeological sites, such as the Greek theater, stadium, treasury, and the “Thulus” building, in which the masses were gathering ancient times, and many others as well. 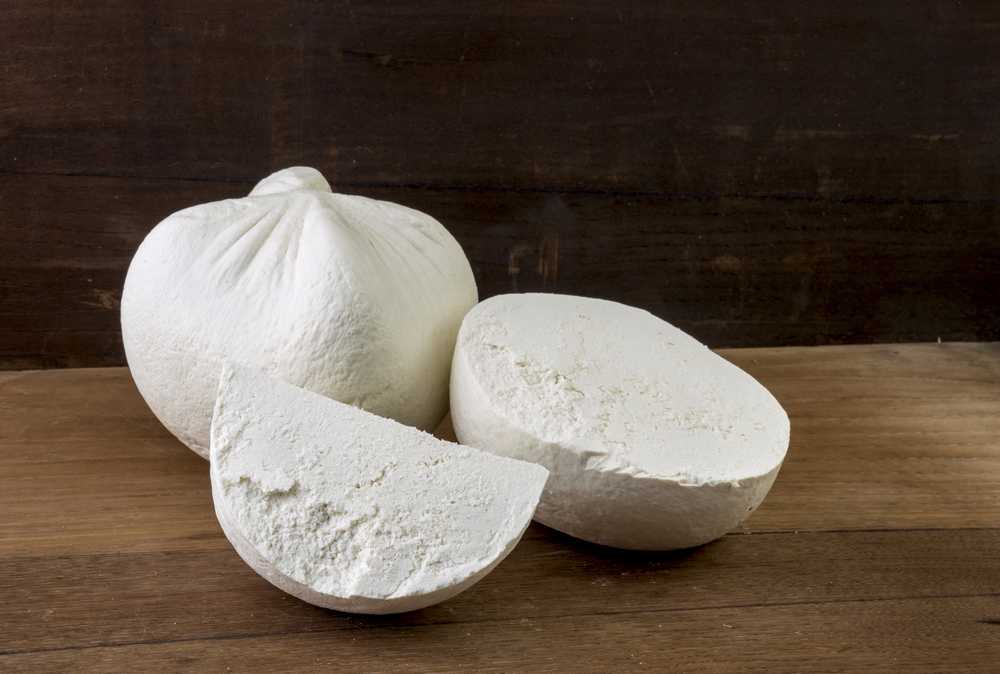 You are on a date with unrepeatable flavors of the most prominent varieties of cheeses such as feta, mesithra, kefaluteri and gravyira in her hometown. While the reputation of virgin Greek olive oil exceeded all horizons.

My trip to Goa – Goa India