Top 10 tourist destinations near the Sirkeci area of ​​Istanbul

Sirkeci Istanbul is a neighborhood located between the Sultanahmet area and the bride of the city, the charming Amenuno, it is also near the Galata Bridge, the main mouth of the Bosphorus strait, the Golden Horn, and the neighborhood is one of the tourist areas in Istanbul that is famous for a large number of hotels and restaurants, to Aside from the main means of transportation in Istanbul, which help visitors in easy access from the European side of Istanbul, to the important European tourist sites in Istanbul.

The area is also distinguished by its historical buildings dating back to the era of the Ottoman caliphate, which during that era included the most important luxury hotels in Istanbul, and although these buildings are no longer used as hotels today, the spirit of hospitality with its originality is still visible in the region.

Sirkeci Turkey hotels offer different advantages from other hotels, as they are located just steps away from Sultanahmet area, and a shorter distance from the Eminonu port and its sea pier, as well as most of them near many of the prominent tourist attractions in Turkey Istanbul, also characterized by their prices. It is affordable for everyone .. Read more 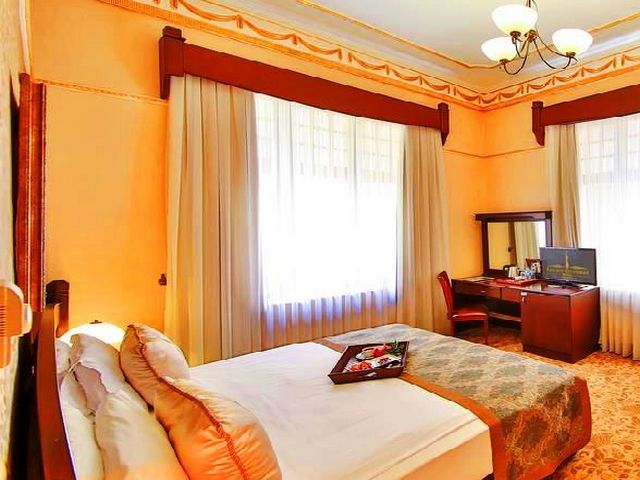 Activities you can do in the Sirkeci Istanbul area

The Sirkeci Istanbul Station, which stands with all its Ottoman glory, is still a train station to and from Europe, and although there are fewer trains today, it is still considered the most important for Istanbul’s transportation and transportation system, to provide many flights that leave every quarter Towards different places of Istanbul, which raised its tourist position among other regions.

There is no need to mention the importance of this bridge in connecting the two naughty Istanbul Asian and European, the visitor suffices for those stunning scenes that he sees during his transit trip, where he enjoys watching the most beautiful landmarks of Istanbul nearby .. Read more

The Golden Horn is one of the borders of the Sirkeci district in Istanbul, and one of the most beautiful areas of Istanbul that is worth a visit, where the views are unparalleled in its beauty, through which you can sail a ship that travels the area and learn about it and enjoy its breathtaking beauty like the historic Ayoub district station, Pierre Loti hill and its café With a charming view .. Read more

The history of the Gulhane Royal Park extends back to the Ottoman era, and it is considered one of the Istanbul parks that provide many recreational activities and is one of the most beautiful tourist places in Istanbul for young people as well as for families .. Read more

The Archeology Museum provides visitors with an interesting journey through the folds of the ancient history of the city, with all the successive eras, through which you can learn about the history of Turkey throughout the ages, up to the contemporary era through the museum’s valuable and rare artifacts .. Read more

Topkapi, which was built in the 15th century AD, was the administrative headquarters of the Ottoman Sultans, one of the most important palaces of Istanbul, which houses one of the important museums of Istanbul, and where the luxurious Topkapi Harem Palace is located .. Read more

The German fountain, built in the shape of a balcony, was built in Germany and then moved to Turkey, to celebrate the anniversary of the visit of German Emperor Wilhelm II to Istanbul more than a century ago … Read more

• You can pass by the Byzantine walls, which were fences surrounding the city of Constantinople, Istanbul now, which has a total length of about 23 km.

• These walls, which deserve the lens of your cameras, were built as a series of defensive stone walls on the city during Roman times.

• The walls have undergone several additions and modifications throughout their history, and are considered one of the most sophisticated and detailed defense systems in the world.

• Visiting the fences, much of which is located in Sirkeci, will give you a great opportunity to take souvenir photos with backgrounds of the city as well as the sea.

• The park is located in Bahcikapi district, Sirkeci district of Istanbul, which is a great opportunity for you to get to know the area, because it contains distinctive features worth visiting.

• The park is considered a haven for the people of the region, and it includes many green spaces and pedestrian walkways, and a good number of Istanbul restaurants and cafes.

• You can eat Turkish food from street vendors, and listen to bouzouq music and other musical instruments, from musicians who visit the park regularly.

• The complex of the Museum of Ancient Oriental Works, which you must visit, includes several buildings that tell the history of the ancient city.

• In the first building, you will see the artifacts left behind by the eras of Babylon, Urartu, the Sumerians and other exhibitions from the Middle East.

• When you visit the second building, you will see coffins dating back to the Hellenistic era, and where there are many archaeological shrines of veteran flags and leaders.

Then they headed towards the third building, the building of which is very similar to the palaces, and contains some of the exhibits and oriental ceramic relics.

Don’t forget to take pictures of the famous clay plate, which includes the peace treaty between the Pharaohs and the Hittites in the 13th century BC.

• When you visit Gulhane Park, head towards the Gothic Column, a historic landmark representing the Roman victory and dating back to the 3rd century AD.

You may know that the pillar was made of marble, with a height of 18.5 m, and is fixed on a base containing a Latin inscription.

Museum of Islamic Sciences and History of Technology

Then visit the Museum of Islamic Sciences and History of Technology located in the former Imperial Stable Building, which opened in 2008.

• Take a few pictures of the museum’s displays, which consist of identical copies of scientific tools used by ancient Muslim scholars.

• You should see the original tools and items in the museum, most of which date back to the 16th and 19th centuries.

You can learn more about the museum by visiting its official website from here.

• You can enjoy a shopping tour in the Egyptian market, Istanbul, to buy what you need, especially the spices and seasonings that the market is famous for.

• You can also easily reach the Grand Bazaar Istanbul, which is located near the area, which will give you an opportunity to buy some souvenirs.

• The Sirkeci area includes some shops distributed in its outskirts, which vary in selling a large number of goods and products.

• It is no secret to you during your shopping tour in the streets of Sirkeci, the nature of the lives of its traditional residents, which deserve to take some memorial photos.

Sirkeci is 1.2 km from the center of Istanbul. The following is the area map.

The best tourist activities in the Moda Istanbul area