The Republic of Abkhazia overlooks the Black Sea, and is located between the states of Russia and Georgia. Abkhazia stretches over an area of ​​three thousand three hundred square miles along the coasts of the Black Sea and the Caucasus Mountains. It is famous for being a huge tourist resort due to its distinguished location, and its charming, picturesque views. It attracts a lot of Russian tourists and has become a new destination on the lists of Arab tourism, as it includes a large segment of Muslims, which makes it a favorite destination for many Arab travelers.

Islamic history of the Republic of Abkhazia

The indigenous people of the Republic of Abkhazia belong to Circassians in ethnicity, language, and culture and are famous for their longevity as they live to a great age of up to one hundred and forty years. There is more than one religion in Abkhazia. The majority convert to Christianity with a ratio of up to sixty percent, while Islam has a ratio of sixeen percent to its adherents. There are those who convert to the ancient religion of Abkhazia, where they worship several deities. Islam entered Abkhazia during the period of Ottoman rule, from the sixteenth century until the eighteenth century. War erupted between Turkey and Russia in the nineteenth century, and the Abkhaz nobility was divided between Christianity and Islam. He was the one who converted to Christianity on the side of the Russians, and those who remained on Islam as the Turks. The Russians finally won the period between the sixties and seventies and forced all Muslims to migrate to the Ottoman Empire. Thousands of Abkhazians nicknamed the immigrants as; they moved from their homeland to the Ottoman Empire in the mid-nineteenth century. The number of immigrants today in Abkhazia is estimated to be about one million, according to the leaders . As for the citizens of Abkhazia, they estimate the number between one hundred and fifty thousand, and five hundred thousand people. In 2009, the citizens of Abkhazia received, for the first time, an invitation from the King of Saudi Arabia to perform the Hajj in Mecca.

Tourism in Abkhazia revolves around nature, and the vast green areas that decorate the buildings are wonderful architecture. You can also enjoy swimming in the Black Sea, and eat famous traditional foods in one of the best restaurants that fill the country.

It is located in the capital, Sukhum, and is considered one of the most important tourist attractions in Abkharia. It is located in the western part of the capital outside the waters of the Black Sea. It was built in 1864 at the request of the French Maritime Navigation Department. It is thirty seven meters long and has a strong light with a brightness of more than twenty-four kilometers. The lighthouse tower is made of iron, and the interior has a staircase of one hundred thirty-seven degrees. In 1877 during the Russo-Turkish War, the Turks took the lighthouse bulb as a booty when they left the city, and they were replaced in 1878 by a new one. The lighthouse gives a breathtaking view of New Athos in Sukhum and the surrounding places It out. The lighthouse is popular with tourists and many important personalities. It was newly restored in 2008 after it was subjected to some damage to guide and assist maritime navigation in the area. 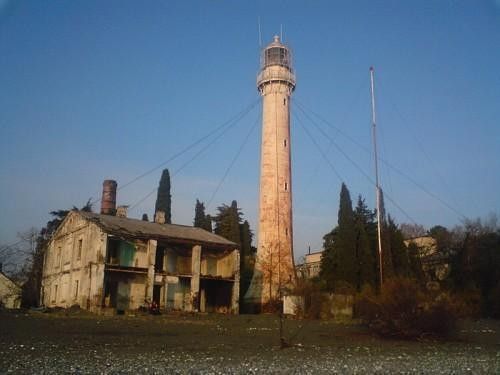 Glory Park is located in the city center, between Prospect Mira, and Nestor Street. The most important landmarks in Abkharia are the main site of celebrations and sorrows. The park was built in honor of the citizens who died while facing the Georgian invaders during the National War between 1992 and 1993 The center of the park includes a trail, a sword stuck to the ground made by sculptor Amirila Adele. This trace has a special meaning that indicates the end of the battle and the pride of those who fell in it. 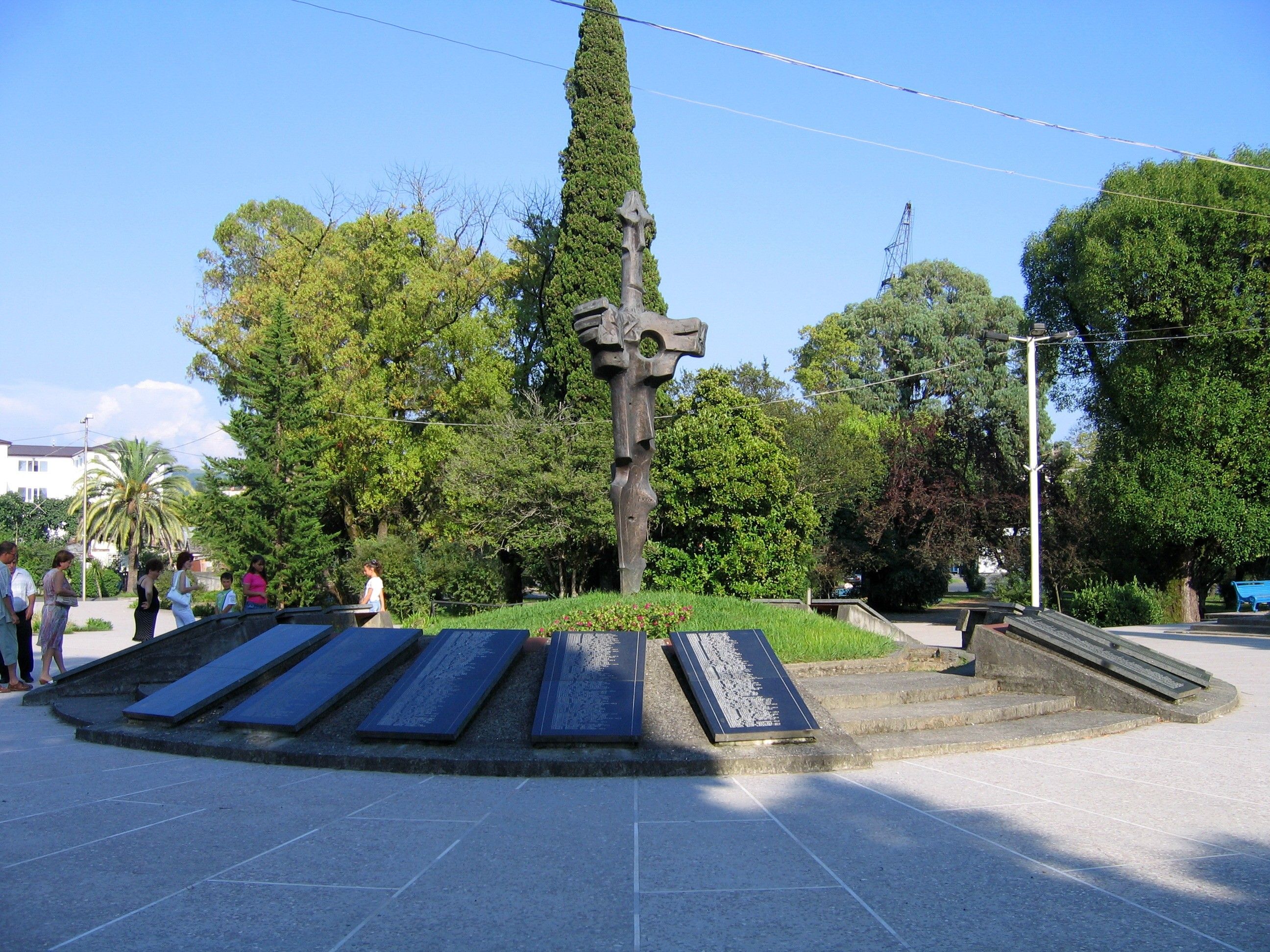 Baghrat Castle was established in the period between the tenth and eleventh centuries, either during the rule of the Georgian visits to Bagrat III, or later during the rule of Bagrat V, and is considered one of the most famous symbols of tourism in Abkhazia. Bagrat Castle was established in a circular shape, and its thick stone walls were made of giant stones, It has been well preserved thus far, and the walls are ten meters high. The castle is located above sea level, and was established in the Middle Ages as a fortress, to protect the valley of the Basala River. While excavating under the castle, many cooking utensils such as iron knives and blades were discovered, along with glass bracelets and Byzantine coins. 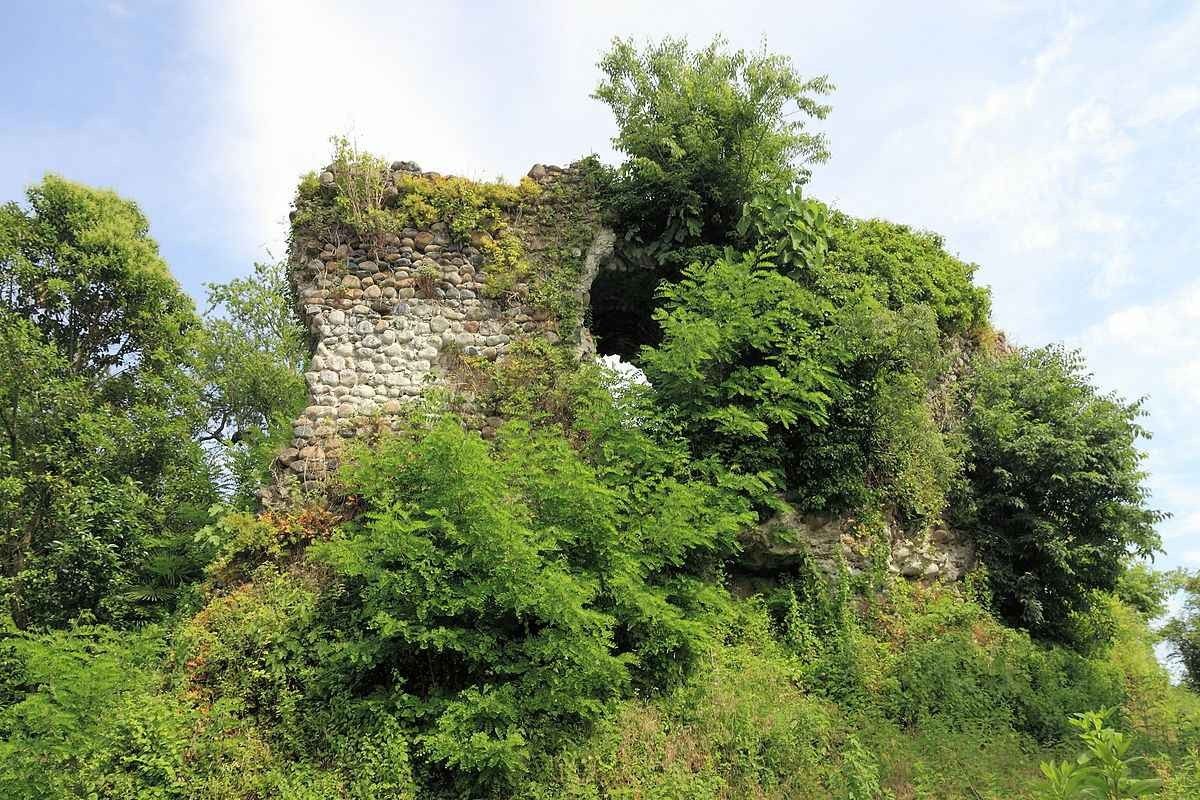 The Bagrat Castle Read also: Tourism in Tatarstan .. All you need to know to travel to Tatarstan

The Abkhazian Scientific Research Institute defines experimental diseases and treatment as the monkey colony for the public. It is located on the mountain of Trapezia, and was established in 1927. The first monkeys were brought to Sukhum of a species: chimpanzees, babons, and macaques. It was difficult to adapt these monkeys in this nature, but today the colony includes about five thousand species of monkeys, and it is an amazing place for science lovers, wildlife, and also for children if you go to tourism in Abkharia with your family. 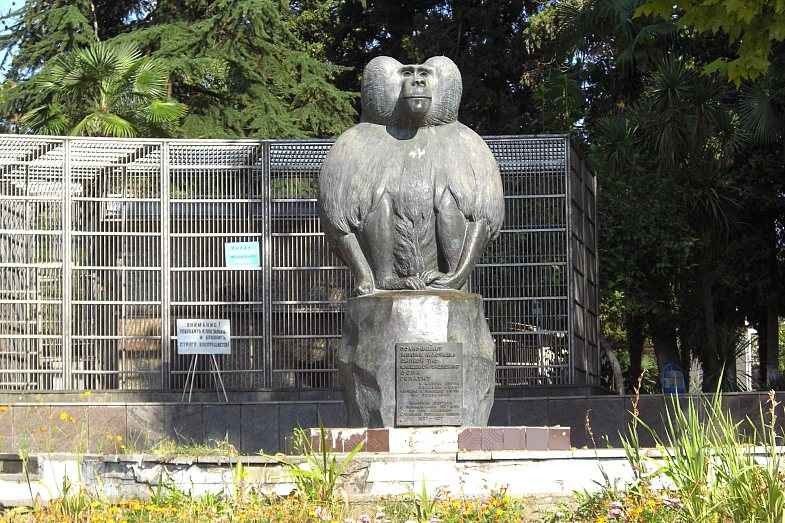 The Pleslitsky Bridge is a prime example of medieval architecture in Abkharia, located six kilometers from the capital Sukhum, and extending over the Basala River. A large area of ​​walnut trees lies behind the bridge, and is famous for being a great destination for picnics, and inhaling fresh air. Limestone, reinforced with cement for protection in the form of an arch, with a length of thirteen meters, and a width of 4.7 meters. The Pislitsky Bridge is the only architectural monument of its kind, three bridges like it were established in the nineteenth century, but they were completely destroyed by the Russo-Turkish War. 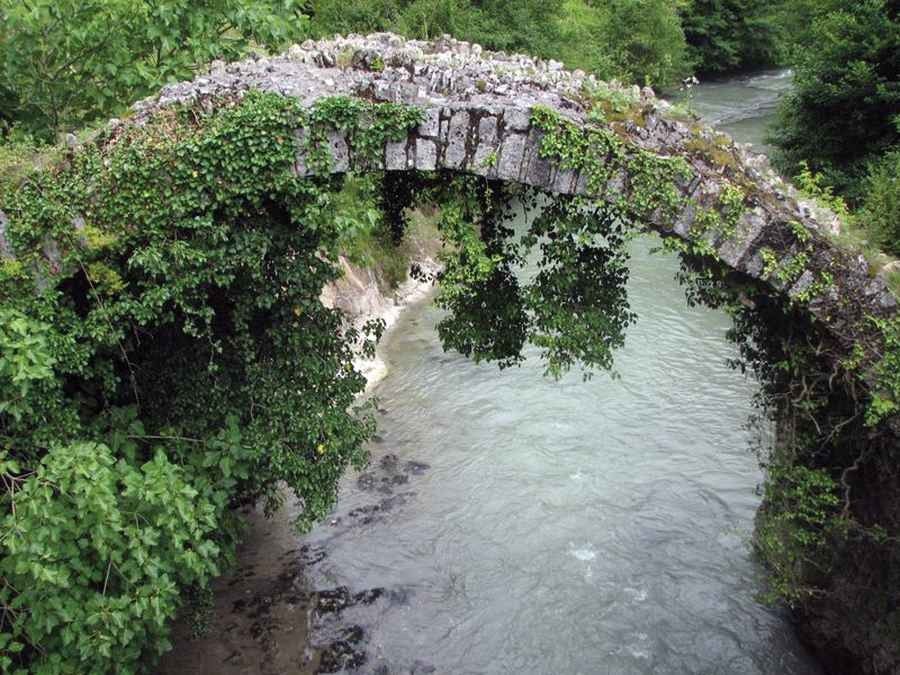 What a doctor you were, and a wonderful art expert left his home with a collection of sixty paintings of the city. The house was then transformed into an art gallery in 1964. Many Abkhazian artists contributed to the formation of the collection of this exhibition. Each of them donated some of their artworks, including Varvara Popnova, Olga Brendell, Marina Ishba and Khota Avidspa. When the exhibition opened it contained a hundred paintings, Twelve sculptures. During the Russo-Turkish war, a large part of the exhibition was destroyed, and his group, which consisted of three thousand objects at that time, was transferred to the Exhibition of the Union of Artists of Abkhazia. The exhibition now holds a group of art exhibitions for Abkhazia artists, and foreign artists also so it is one of the most important tourist places In Abkhazia. 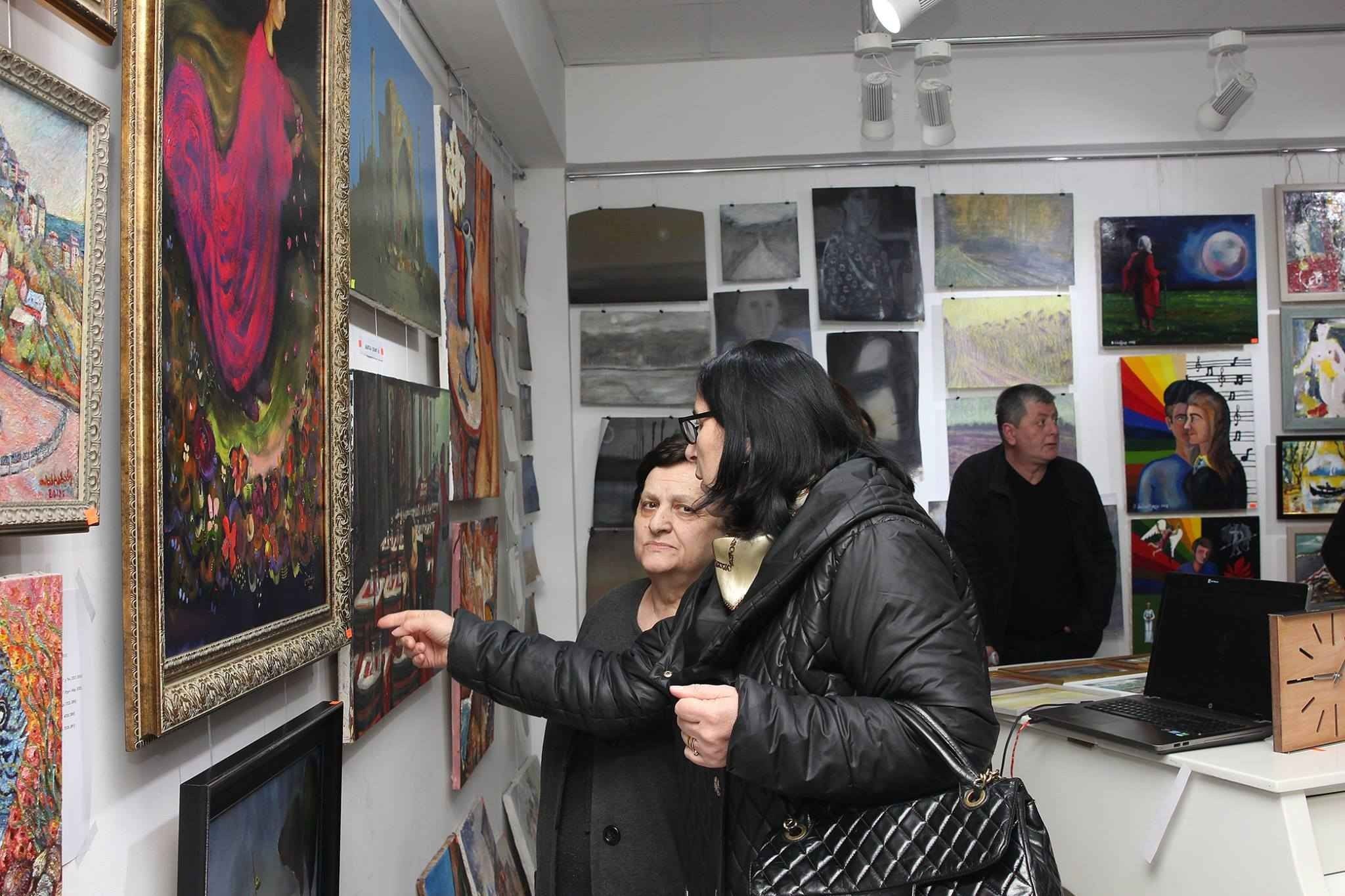 One of the most important tourist attractions in Abkhazia extends for about a hundred kilometers, up to the Georgian border along the Angur River, and penetrates several natural attractions such as slopes, valleys, and forests. Some historians say that this wall belongs to the fourth century, and others say that it dates to the sixteenth century. The fence also includes a tower, which was once established for protection and observation.

Urban and social aspects in the village

Where is the designer palace?