Tourism in Bologna, Italy: The 10 most important tourist destinations are recommended

Bologna is one of the best tourist destinations in Italy and Europe, famous for its famous foods as it is an important place for the manufacture of famous Italian pasta of various kinds. You can enjoy wandering within the different city halls to see a number of aspects of ancient architecture, and after completion you can go on a shopping tour first to head for a meal Delicious local meal.

The ideal way to travel to Bologna is where its JI Marconi di Bologna airport is directly linked to the airports of the Middle East, Europe and a number of tourist islands.

Another way to reach Bologna, whether from different cities of Italy or through other European cities, as the city has its own central train station, which is ranked among the best in Italy.

Italy has a high-quality bus network linking the different cities of the country, which facilitates your transportation, and it saves you a lot of money if you travel within limited expenses.

The best times for tourism in Bologna

The period between April and June, as well as August and October are the best times to travel to Bologna where; the weather becomes temperate full of fresh air breezes with temperatures ranging from nineteen to twenty-six degrees Celsius.

Walk and walk around Bologna

Bologna can be easily explored on foot, since most of the sights are located in and around the city center. You find lots of restaurants and cafes wherever you go beside; the features of ancient architecture from brick-built houses, and various shopping destinations.

As you go around, you will find many restaurants and cafes full of tourists and locals, as the city is famous for its delicious food. Local dishes are mainly based on pasta, cheese and sausage.

Bologna provides all shopping lovers with many destinations that suit different tastes and budgets, from popular markets to malls and souvenirs. For popular markets, you can find them east of Pisa Maggiore, and also in Mercato del Arbi. While the commercial centers there are many such as the Centro Borgo and Centro Nova.

If you visit both areas, you will find laughter and talk voices filling the place, mixed with the sound of the water of the fountain that distinguishes both of them, which is the Fountain of Del Nettuno. In Bologna, between them you can find Istiklal Street full of shopping destinations, as well as Galleria Street filled with aristocratic houses. 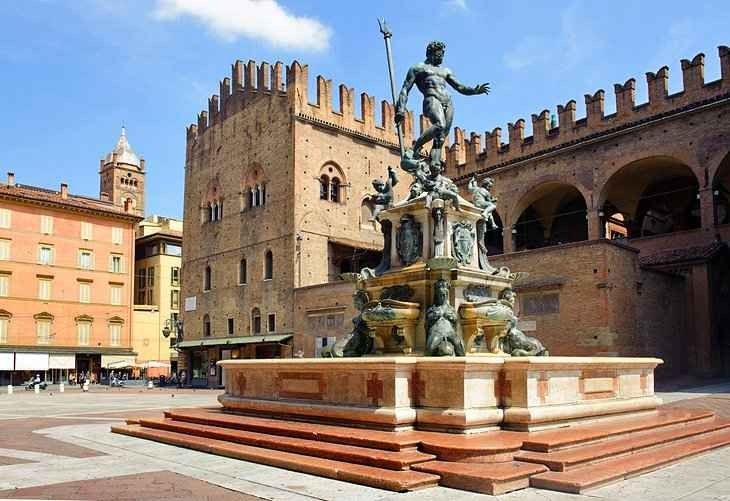 The colossal church, which is among the most important places of tourism in Bologna, Ibiza Maggiore, was established in 1390 to become larger than the church of St. Peter in Rome, but these hopes were not fulfilled to this day. A small museum is attached to the church that displays a number of designs for the façade, some of which were laid down by The famous architect
Andrea Palladio. 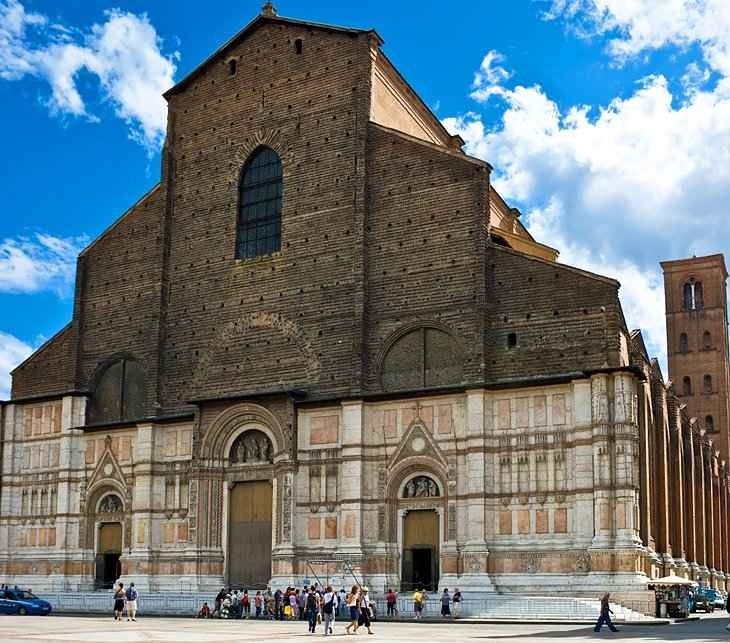 The city of Bologna has its leaning towers along the lines of the city of Pisa, but they are not the size and grandeur of the Leaning Tower of Pisa. These are the only remaining towers among the twenty towers that decorated the sky of the city in the twelfth century. These towers were established in the past to observe and take shelter in times of attack, but today you can climb them to enjoy a wonderful view of the city, which places it among the best tourist attractions in Bologna. It is tilted to thirteen meters, and Torre delle Ascenelli which includes four hundred and forty eight degrees. 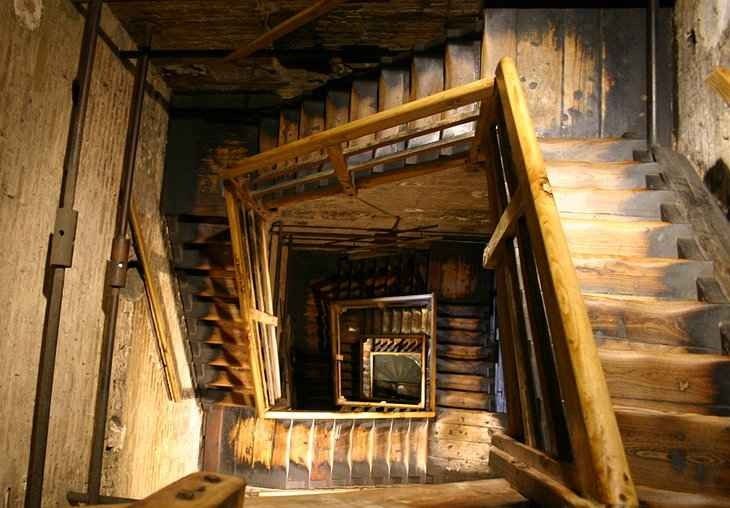 Santo Stefano is one of the most important places of tourism in Bologna, being one of the oldest churches of the city, consisting of eight buildings and nicknamed the cradle of faith.

One of the most prominent tourist places in Bologna displays a collection of prehistoric monuments and Etruscan civilization, in addition to a number of treasures of the Egyptian, Roman, Greek and Celtic civilizations. 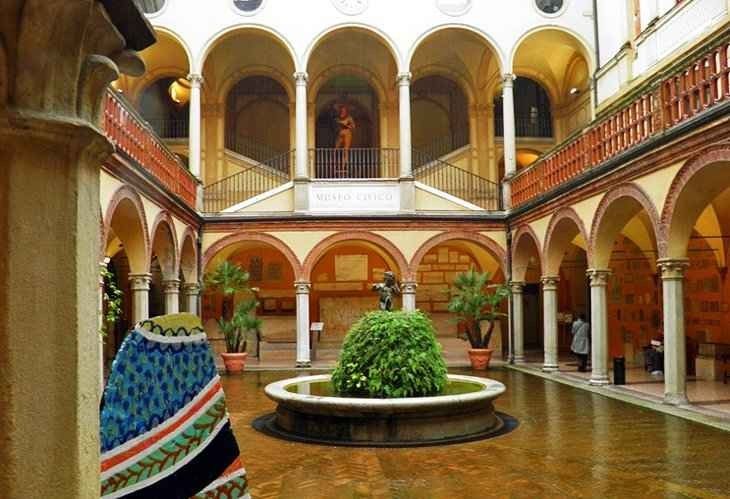 This church was founded in 1221 in commemoration of the memory of Saint Dominic, and it is classified among the best tourist places in Bologna because of its wonderful designs. These designs include a marble dome with sculptures and fine details, in addition to wood inlay adorning the choir. The church provides tours that cover most of its parts. 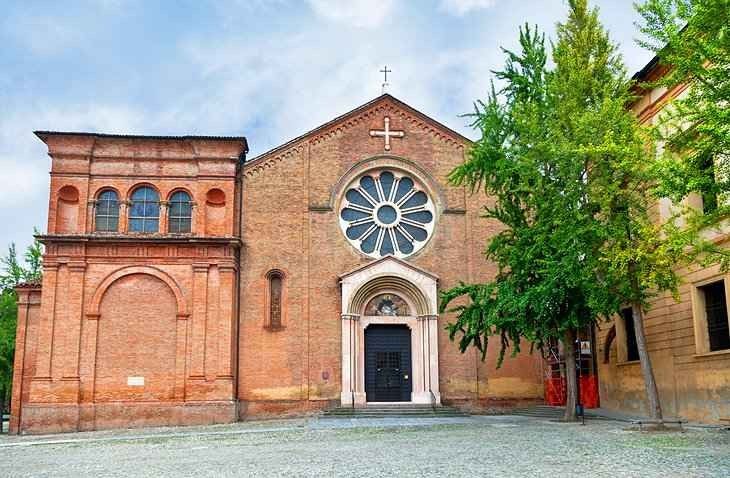 The small church remains considered one of the most important tourist attractions in Bologna, as it includes a small musical room with a number of treasures and pieces of art that amaze all those who see it in all its splendor. These distinctive pieces include bright drawings, murals, and gold-plated sculptures. A group of fifteen clay figurines are distributed throughout the room, and the ceiling has charming designs as well. Concerts and music programs are held at this room due to the excellent acoustics of the room.

St. Peter’s Basilica is considered one of the most beautiful places of tourism in Bologna because of its charming designs and artworks. The church was founded in the seventeenth century in the Baroque style, and underwent numerous renovations and repairs. Behind the door at the end of the church corridor is a collection of treasures that were donated to the church, for religious ceremonies. 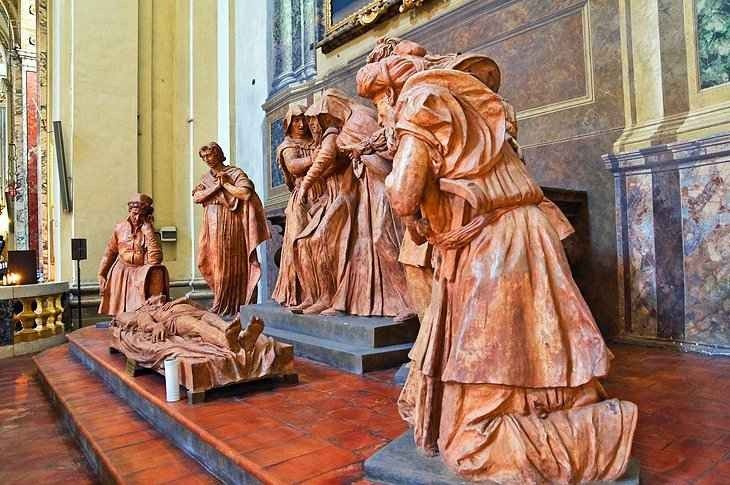 The National Gallery is one of the best places for tourism in Bologna, where it displays and preserves a number of artworks of artists who lived in the city and the region of Emilia-Romagna, especially the period between the third and nineteenth centuries. Some of these artworks were saved from churches that were burned or converted to other uses, and some were Bring it from France after Napoleon I captured it and brought it to the Louvre Museum. 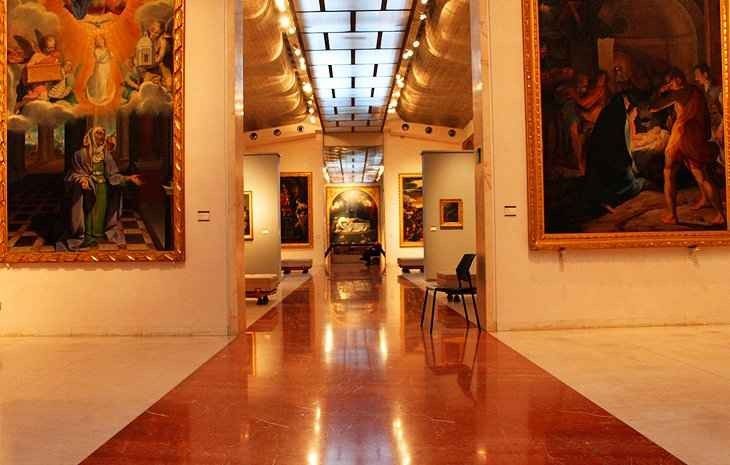 Piazzola is one of Bologna’s must-see attractions; a huge open-air market in the city center near Parque Montagnol. This market started in 1251 as a livestock market, but today it includes more than four hundred vendors from street vendors to craftsmen who sell their businesses. Handmade.You can put whatever you want on the market from used clothes to shoes, household items, cosmetics, and other commodities. 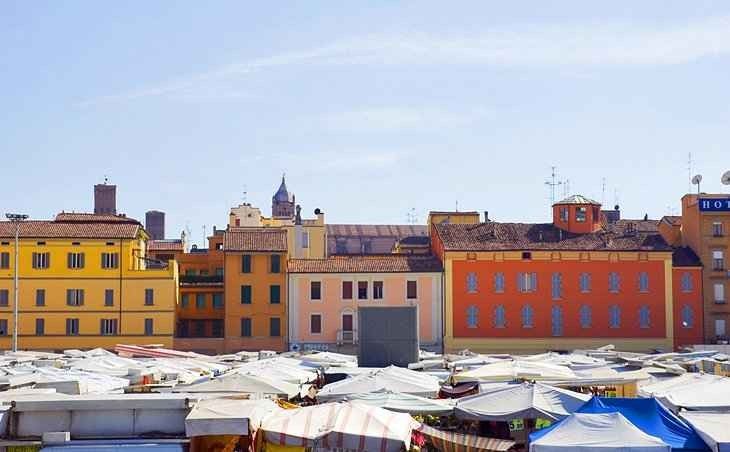