Tourism in Fez, Morocco .. and 10 most beautiful tourist places

Fez is classified as the most unusual and distinguished city in Morocco, and it is also known as the country’s spiritual capital. Despite its progress, it still retains its authenticity and long history. Tourism in Fez is based on centuries-old Islamic architecture that invades every corner of the city. Wherever you stroll around Fez you will find monuments and historical monuments surrounding you, making them a popular destination for fans of history and culture.

The school of Bou Anania was established between 1350 and 1357 by Sultan Bou Anani, and it is considered one of the most important tourist attractions in Fes because of its unique architecture and beauty. The school is one of the few Islamic buildings that non-Muslims can visit. Until the 1960s the school was teaching theology, but then it was converted into an archaeological tourist attraction. You will be amazed by the exquisite woodwork and stunning stucco decorations made with the hands of the best Moroccan artists. 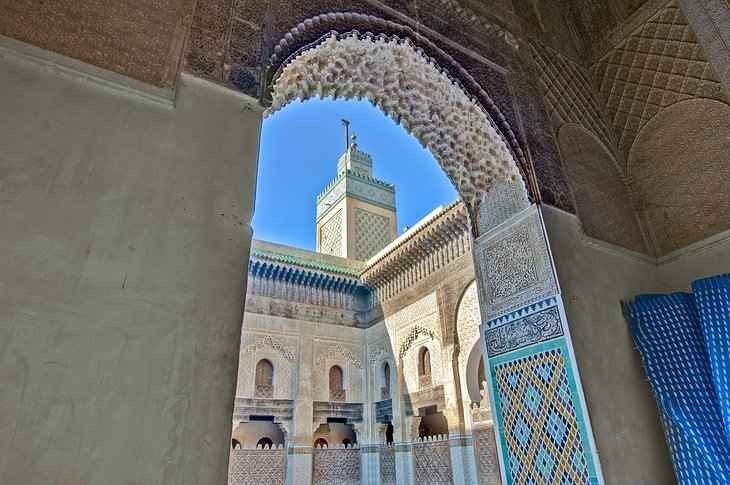 Another example of the professionalism and splendor of Mardan architecture, was founded in 1325 by Bou Said. The backyard of this school has a sophisticated design, distinct from the works of zellig, and the cedar motifs that make it one of the most beautiful places of tourism in Fez. See the green spaces of the villager’s mosque in a magical view from the school roof. 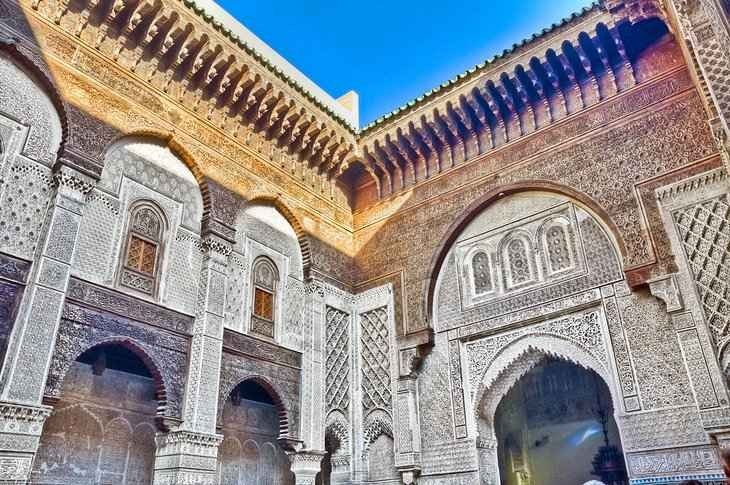 One of the most important tourist places in Fes and the oldest neighborhoods, and is considered the largest ancient city in the world still preserved in its original form until now. The main gate inside the city is known as: Bab Boujloud. By approaching it, you can see the famous teacher’s lighthouse, Bo Anani School. The city’s branches are divided into two different regions, separated by a meandering river. On the northern bank you find most of the historical monuments and markets, while on the south bank you find the area of ​​the local population, and the narrow paths which are a great destination for taking some wonderful memorial photos. 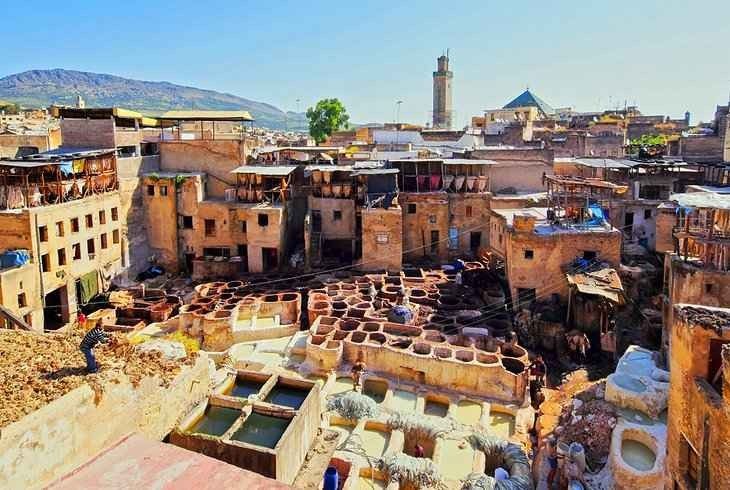 The markets and gradations area is located in Fez El Bali, and is considered one of the best places to visit in Fes, especially for those who love shopping. The area is full of kiosks that sell; handcrafted works, leather and metal crafts, colored lamps, and tiles. The area is located west of the Al-Qarawiyyin Mosque, and is also home to gradations of vacancies; one of the most magnificent tourist sites in Fez. These graduations are the place where animal skins are tanned. You can see the entire process from the houses in the area, and it is also a great place for photography lovers to take the most amazing photos. 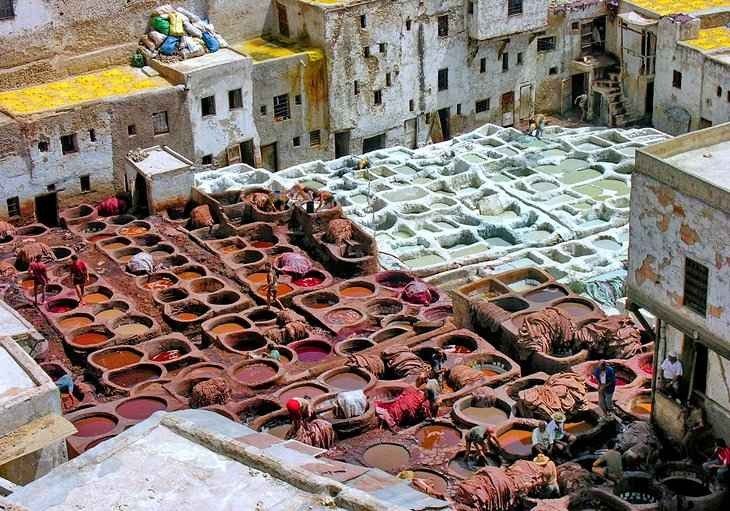 One of the most important places of tourism in Fez, located in the new part of the city, and it was an old Jewish neighborhood. It is located north of the royal palace, and is filled with many houses that were; it was home to the Jews who lived in the city. The Jewish cemetery is located at the edge of the neighborhood, and it is considered one of the most important landmarks of this area in addition to the Jewish Museum, which includes a collection of pieces that reflect the culture and private lifestyle The Jews of Fez. 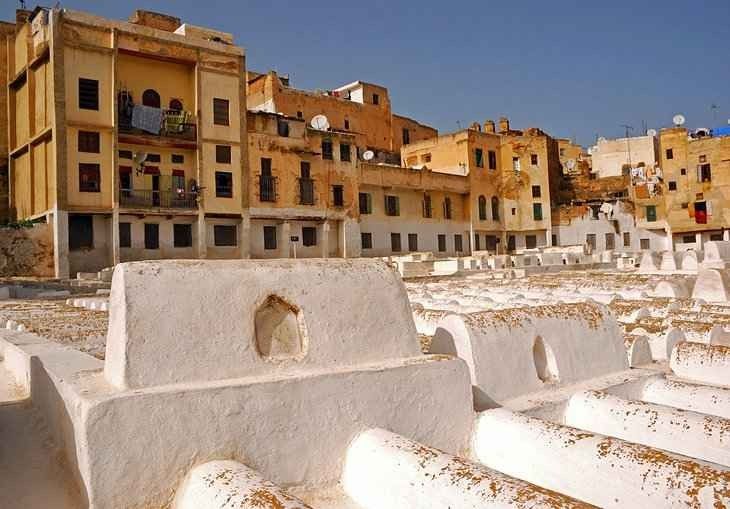 Borj Nord and the Merenid Tombs

If you want to see the entire city in an impressive and scenic view, then Nord is your ideal destination. It is located outside the city walls, and is one of the best tourist attractions in Fez, located within a 16th-century fortress, which contains a museum for the Armed Forces. This museum includes a collection of weapons that include some rare pieces that reflect the manufacture of weapons around the world in the past. After that you will go to the golden Merinid cemetery, which is located on top of the hill where you can see all parts of the city, and the green spaces behind it. 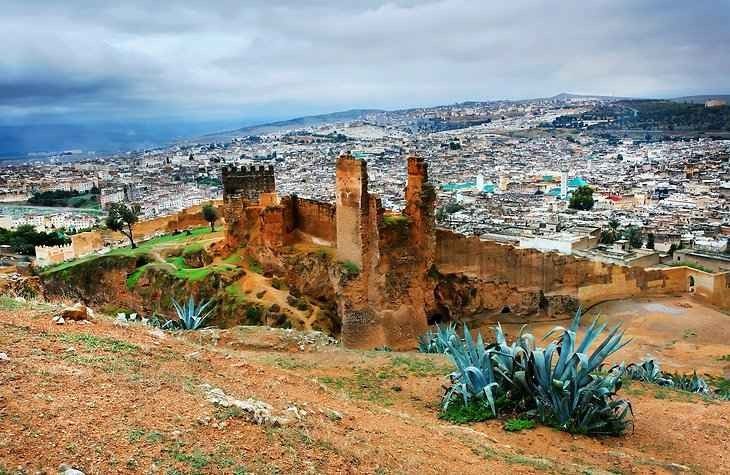 Borj Nord and the Merenid Tombs

The Al-Karaouine Mosque is one of the tourist sites in Fez, which reflects the culture and history of the city. Founded in the year eight hundred and fifty seven by Tunisian immigrants who came from the city of Kairouan. Today it is one of the most important centers of worship in Morocco, with a prayer hall that accommodates twenty thousand worshipers. It contains one of the oldest offices in the world, with more than thirty thousand books. The ninth century Qur’an copy is located in this collection, which makes it an important destination to visit when traveling to Fes. 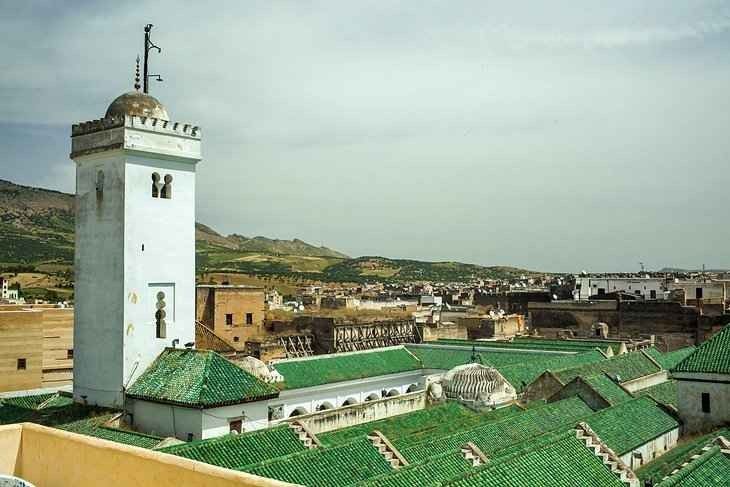 The Al-Batha Museum is located within the Spanish barbarian summer palace, which was founded in the nineteenth century. The museum includes a Moroccan group, of handicrafts such as carved wooden doors, ironworks, embroidery, carpets, and jewelry. The brick room is the center of attention in this museum, which makes it one of the most tourist places in Fes attractive to tourists. Inside the room you find wonderful blue tiles, colored In bright silver. There is also the backyard of the museum, which is more like an oasis with tall palm trees, and charming plants. 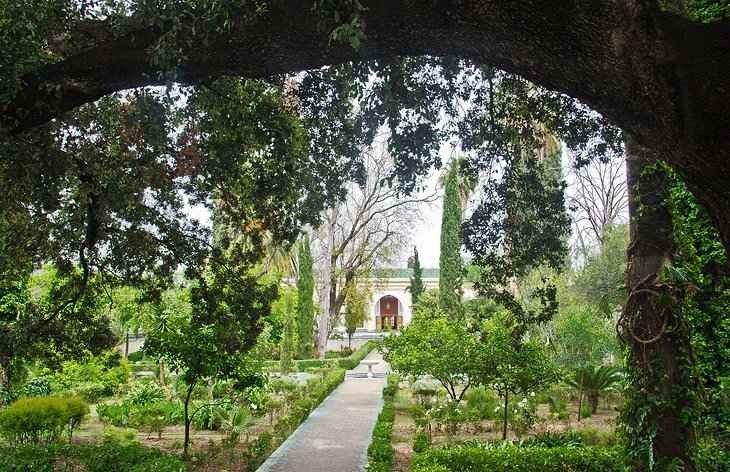 A unique destination not to be missed when traveling to Fes, located in the center of the Negjarine Palace, surrounded by Porsche Metalworkers. This museum highlights the beauty and uniqueness of the Moroccan timber industry, through its display of carved silo doors, decorated state cabinets, and Mashrabiya window frames. In addition to the courtyard full of solid wood columns, ornate balconies, and stunning plaster designs all make it one of the most beautiful places Tourist in Fez. 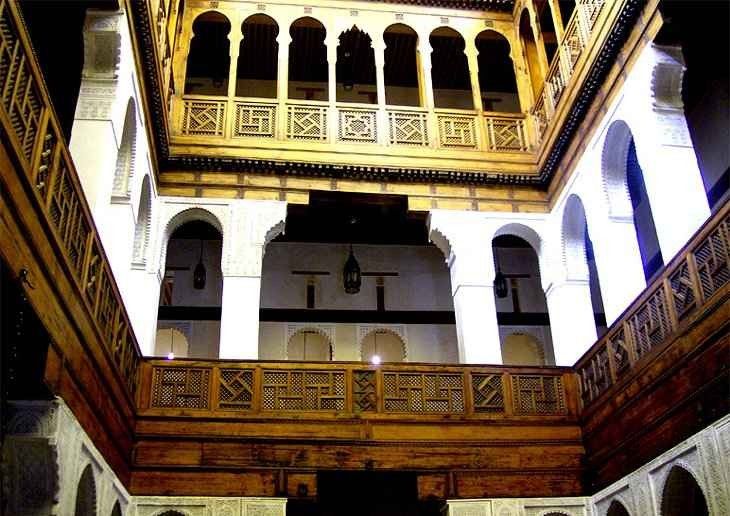 Founded by Berbers in the fifth century, Taza was an ancient fortress that protected the road leading to fertile lands in the West. Located in the walls of the city, Tazika National Park is one of the best places to visit in Fes. It is a great destination full of adventure, fun, and enjoyment. The forests of the garden are full of cork trees and cedars. You can climb Mount Tazica to enjoy the view of these enchanting forests of up to one thousand nine hundred and eighty meters. 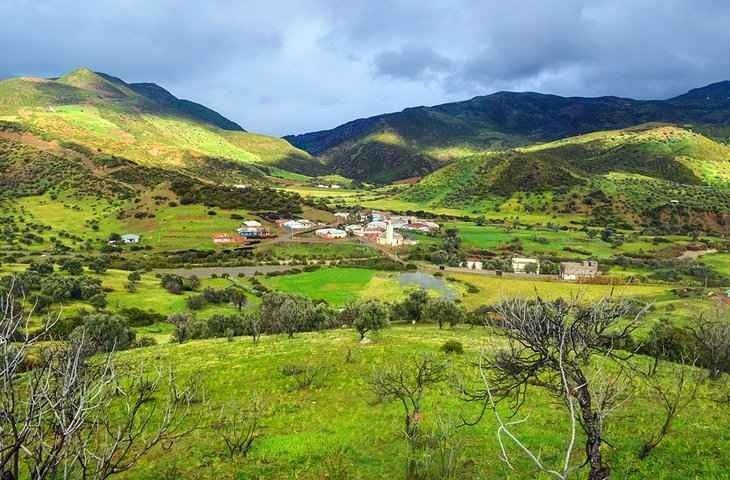