Tourism in Tajikistan is essential information you must know before traveling

Tourism in Tajikistan is experiencing increased growth due to the many features enjoyed by the country that attract large segments of tourists. Arab tourists in Tajikistan find a suitable place to spend vacations and vacations among the picturesque natural places. Although tourism in Tajikistan does not have the elements of well-being that do not exist in the countries Major tourism in Europe and Asia, the simplicity of life and free of complications and congestion is an attraction for many as well.

Essential information before traveling and tourism in Tajikistan

Arab travelers need an entry visa to Tajikistan, but procedures vary from country to country. For citizens of countries such as: Egypt, Kuwait, Saudi Arabia, Qatar and the UAE, they can obtain an electronic entry visa upon arrival. The procedures are limited to filling in the e-visa form from this link for the Ministry of Foreign Affairs in Tajikistan to review within 1-5 days and then Send confirmation and an invitation to complete the rest of the procedures. Also, citizens of previous countries can obtain an electronic visa directly from this official website: www.evisa.tj for $ 52. 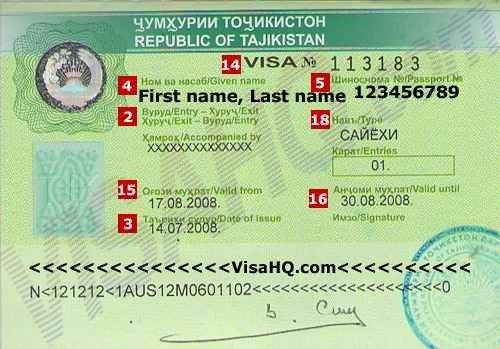 As for citizens of countries such as: Bahrain, Algeria, Jordan, Libya, Lebanon, Morocco, Sultanate of Oman, Syria, Yemen and Tunisia, they can submit an application via this link for $ 5. After that, the Ministry of Foreign Affairs in Tajikistan will send a confirmation to the e-mail address the bearer can Obtaining a tourist entry visa for the country from the airports of “Dushanbe” and “Khujand” for 35 dollars. The rest of the citizens of Arab countries who did not mention their countries previously can obtain a travel visa from any embassy or consulate of the Republic of Tajikistan around the world. Read also: The best time to visit Tajikistan

A visitor is entitled to reside in Tajikistan for a period of 30 days from the date of the validity of the entry visa, after which he must obtain a registration document stamped by the Immigration Police Office with an additional amount of money, otherwise he will be imprisoned and legally held accountable. The beginning of May until mid-October. During this period, the ice begins to recede from the peaks of the “Pamir Mountains”, which leads to the opening of closed roads and the emergence of many charming natural places in the region. There are many occasions and tourist events in Tajikistan throughout the year, perhaps the most famous of which is celebration Do not harvest some of the flowers that the country is famous for, such as “tulips” and “milk flower”, among others.

Not long ago, the celebrations in Tajikistan were limited to religious occasions, especially Islamic holidays, but after the government sought to stimulate tourism, a wonderful group of events and festivals appeared on the Tajik agenda.

The festival takes place from 20-22 March of each year and represents the New Year among the inhabitants of Central Asia. The festival coincides with the period of spring equinox in the country where nature and climate are fully prepared for celebration and bustle. Many local dishes are presented in the celebration such as «Somolak» which He needs a lot of effort in preparing him, and therefore he is entrusted to the virgin girls who cook them in crockery while they talk, sing and dance.

Also called (At Chabysh), it is a horse racing festival held in July every year.

It will be held in the capital «Dushanbe» from October 8 to 12 and is dedicated to lyric poetry in the manner of the inhabitants of the south. The festival is not without artistic, lyrical and exhibition activities.

The best means of travel and tourism in Tajikistan is to fly by plane, but unfortunately there are no direct airlines for most of the world and therefore the best solutions are to go through Russia or through its neighbors such as Uzbekistan, Kyrgyzstan and Afghanistan. You might like to read: How to plan a low-cost tourist vacation

There are several places to change the currency in Tajikistan, the most important of which are the branches of banks located in the airports of “Dushanbe” and “Khujand” as well as in most major hotels. Tourist checks are not accepted throughout Tajikistan, but bank cards can be used in the previous two cities only.

Travelers during tourism in Tajikistan need to know the local currency which is called (Samani) in relation to “Ismail Samani”, founder of the first Tajik state.

The cost of living in Tajikistan

The tourism trip in Tajikistan is characterized as an inexpensive trip in terms of daily expenses such as eating and transportation. Rather, it can be said that the cost of such items is at least twice less than some Arab capitals. A comparison of food prices between the cities of “Dushanbe” and “Riyadh” 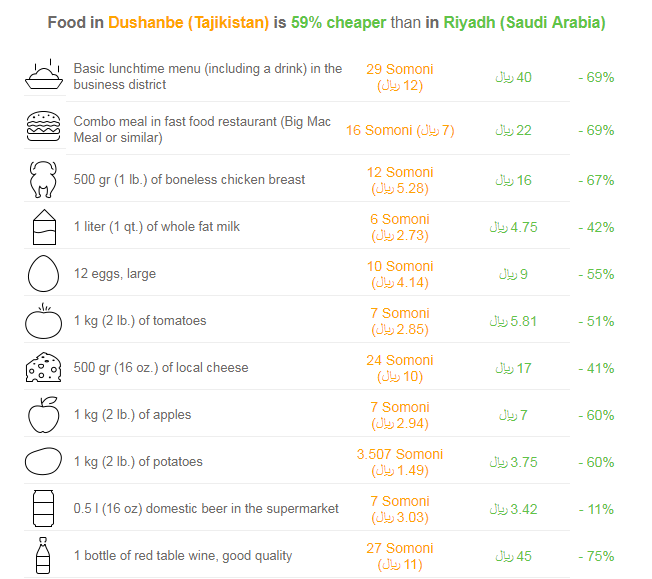 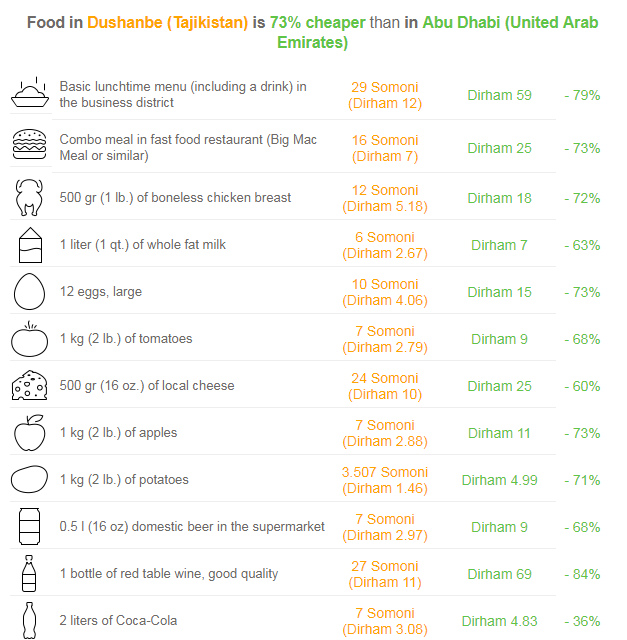 There are not many hotels in Tajikistan, and most of the major hotels are concentrated in the cities of “Dushanbe” and “Khujand” and they are characterized as modern hotels designed in the European style. As for young people with economic budgets, they can find hotels dating back to the “Soviet” period, which provide lower capabilities at low prices. .

The most important tourist places in Tajikistan

History and nature are the most important tourism attractions in Tajikistan that have gone through different civilizational periods over 3000 years of age. They still preserve the effects of these civilizations and their fragrance. As for nature, Tajikistan is known for its mountainous nature that occupies 93% of its area, and its green summits in the summer white and winter, which makes it on top of relaxing resorts In the world.

The country’s capital and its most important cities enjoy services. There are many traditional tourist places, such as the “National Museum”, which is located on an area of ​​15 thousand square meters. The museum includes many halls that reach more than 20 halls of various sizes, displaying antique pieces and paintings from different eras. There is a “National Museum of Archeology”, which includes the original artifacts that have been reproduced for display in other exhibitions. As for lovers of green places, they can visit the Dushanbe National Park, which includes a strange and strange variety of plants, during the tourism in Tajikistan. The environment It is in Tajikistan but also includes plants from tropical forests. The park administration provides several additional activities such as outdoor art shows, educational displays, and book fairs. 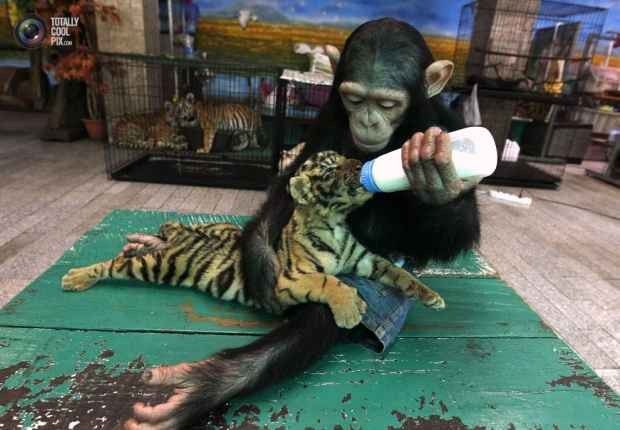 For families and children, there is the Dushanbe Zoo, which was established during the Soviet era and was known at the time to be one of the best zoos in the Soviet Union. Although the park was affected by the civil war and weak financial resources after independence, many aspects of the park remained as they are, especially tropical animals and Indian elephants that are displayed in the arenas Exposed. In addition to groups of tigers, reptiles, bears, eagles, hawks, foxes and wolves. If you are a fan of adventure then you should visit the Dushanbe Highway, one of the fastest highways around the world and also the oldest of them. 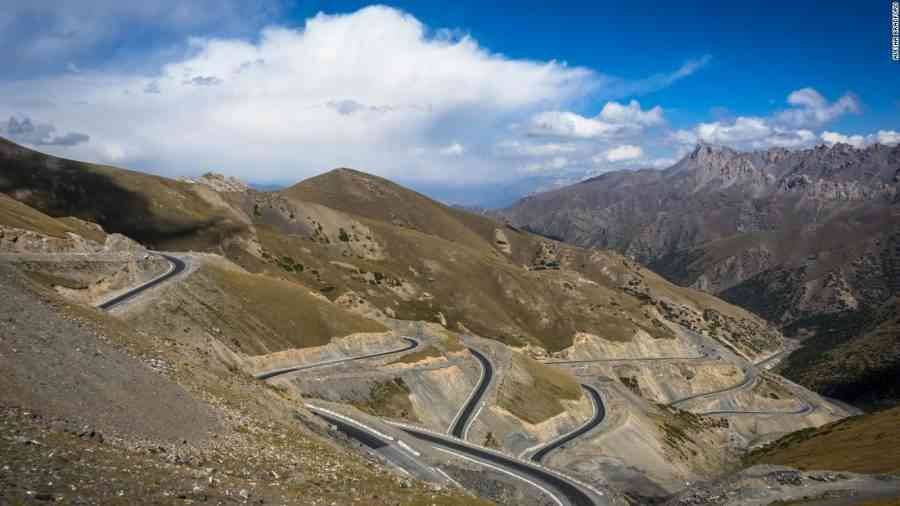 Those who travel to Tajikistan for the purpose of tourism can benefit from the medical tourism offerings that are available in several areas, including Dushanbe. On top of the snowy mountains that surround the city and in the region of Khojah Obi Qarim in particular, there is a medical clinic for diseases of the joints, rheumatism and back pain. Treatment is provided in this sulfur water resort The hot springs that originate from inside the mountain rocks with a temperature of 98 degrees. The water also includes natural therapeutic elements such as radon and fluorine in addition to sulfur, and the spa provides more than 20 treatment services such as electrical therapy and massage. This treatment center is located at an altitude of 2000 meters above It provides sea surfaces housing, a hospital and hotel accommodation for the duration of hospitalization in addition to the landscape that is in the flow of fresh river from the heart of the mountains. 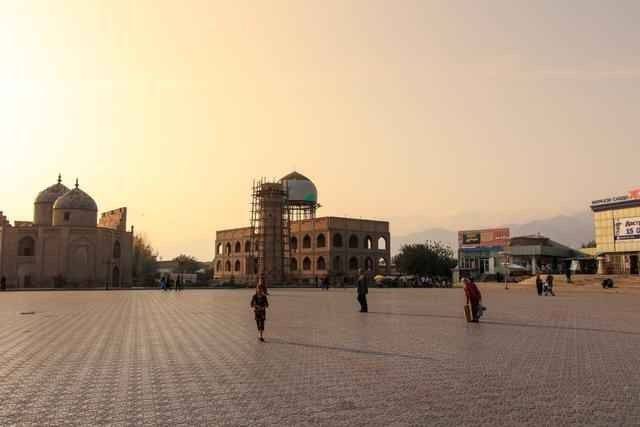 One of the oldest cities in the Central Asia region, as it extends for more than 2500 years and is the second most important place to visit during tourism in Tajikistan to get acquainted with its long history. The city witnessed great events in history, including confronting the armies of Alexander the Great, Genghis Khan and the Russian armies that all left and stayed « Khujand. ” 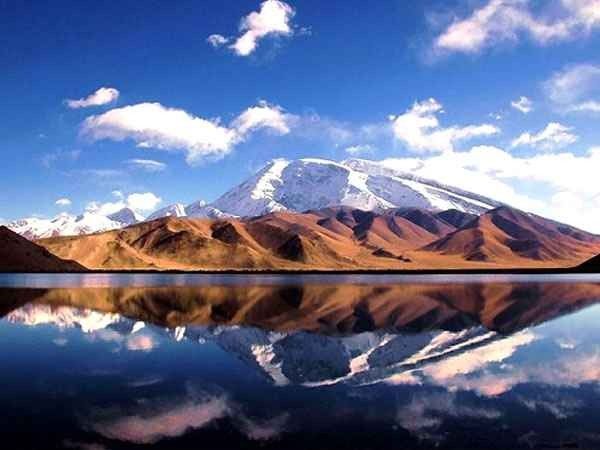 Tajikistan is famous for the presence of many mountain lakes, which are estimated at 1,450 lakes in all of the country. The largest of these lakes is Lake Karakol, which is located at an altitude of 3914 meters. It is a salty lake believed to have formed in a crater left by the fall of a meteorite 25 million years ago.

The best restaurants in Al-Baha .. Delicious dishes of the highest quality and the best prices