Tourism in the Asian section of Istanbul: places to visit

An integrated guide to tourism in The Asian section in Istanbul It is described as the quietest and most beautiful as it includes shrubs and vegetation areas as well as places of maritime entertainment from them and overlooking the city and so on. We will show you some of the aspects of the beauty of the Asian section in Istanbul, so follow our virtuous reader:
The Istanbul section associated with the Asian continent is distinguished by its calm nature, unlike the vitality and clamor of the European part, and this does not mean that it does not include tourist areas worth visiting, but rather it is distinguished by some of them, which differentiates them from the other part if not also from the rest of Europe.

The Asian section in Istanbul: 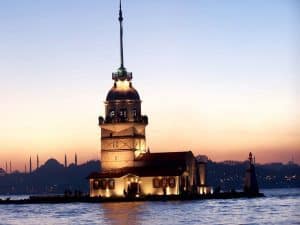 Kizi Kulizi Tower, Girl Tower, or Girl
An important milestone in Asian Istanbul about which stories and stories about the history of its past were woven around, and it is considered one of the dated legacies. With bliss.
So he decided to build a tall building away from the mainland, and he hid part of the Bosphorus Corridor, then he restored it, and he did so and built this tower, but at the age of 18 his daughter was born. That the tower is called the girl’s tower so that visitors can remember it.

You can see, visit and enjoy, as a tourist, several things in the girl’s tower area, such as:

Exploiting the Bosphorus Strait by marching in it via a boat, and through this pass you can reach the tower, and after your arrival there is also looking to the sea from the top of the tower to take the most magnificent period of the magnificent and clean sea view, as you can look beyond the pass on its opposite side where additional features of Istanbul , And the tower is a good place to take some photos of the memory.
The tower also has a restaurant set with sophisticated tastes on the first floor, as it includes a café in the above, so you can relax or eat while you enjoy the views that will surely delight you.

Among the beautiful landmarks of Heydarpasa Railway:

Including a means of transportation, including a shrine for tourism, as it is the largest in Turkey and the oldest, as well as its location overlooking the sea, which allows taking a break to the side of the sea and enjoying its calm and watching boats, and taking pictures of the memorial and others.

Shamlica, a distinctive bride hub with varied views of minarets and residential areas of Istanbul neighborhoods, as well as green and clean clothing on it, with its height from the rest of the Istanbul hills in the Asian section of Istanbul, what enables tourists or even local visitors or domestic tourism to view Istanbul from afar as a painting A wonderful artist, characterized by the presence of gardens with multiple types of flowers and organized paths between them with a lounge at close distances.
The hilltop has areas for food and cafes for drinks as well, and those who visit them especially the tourists are undoubtedly embarrassed, as well as the region has a romantic visit from the preachers or grooms and other fans of memorial photography.

An amusement park and games, located along Baghdad Street, and it includes father’s areas for children and others for adults and children together, and for adults individually as well. For example, there are exciting and adventure games such as the kick-off agitation, or octopus and car games, as well as rotating games for children on horses, or the house of madness .

An area characterized by a maritime constructive nature, especially its ancient history, and it is linked to the cultivation and production of cucumbers for the Turks, and a visitor to it is bound to visit the Museum of SV Cars to display old cars.

It is bordering and adjacent to the Bosphorus, in exchange for the European Turkish Bebek, a region that includes the homes of the wealthy who want to adjacent to the palace that is there, and on its plateau you will find an observatory that is the second observatory in Istanbul, you can see the Bosphorus and Fatih Bridge in full.
Among the most heritage antiquities are the lighthouse attributed to Kandilli, the marine home of Muhammad Pasha, and from Kandilli you can head towards Kanlıjah, which is famous for the presence of the Mehrabad Forest, which is the most visited tourist and tourist destination throughout the year.
There are many hotels, restaurants and different shopping areas on every tourist place that you visit within the Asian section of Istanbul, places of rest and other entertainment or great views.