Tourism in Uzbekistan is not the same as tourism anywhere in Asia, as humans, customs and traditions in addition to the simple calm nature are the main attractions of the country. And “Khwarizm.” Arab tourists, when traveling to Uzbekistan and its neighbors such as Kyrgyzstan and Tajikistan, find a special welcome and sincere affection, as the residents love the Arabic language and are keen to learn some of its vocabulary, especially with regard to Sharia sciences.

Tourism in Uzbekistan is necessary information before traveling

Uzbekistan can be visited at any time of the year, but the best tourist seasons are in April, May or September and October. Many festivals and tourist events are held throughout the year, so tourists can choose travel dates to coincide with some of these events. We advise Arab travelers that the tourism trip in Uzbekistan be during the spring season to enjoy the “Nowruz” celebrations and see the live performances and colorful colors. Also attend the “silk and spices” festival. It is held in the city of Bukhara and largely reflects the culture and civilization of the local population. 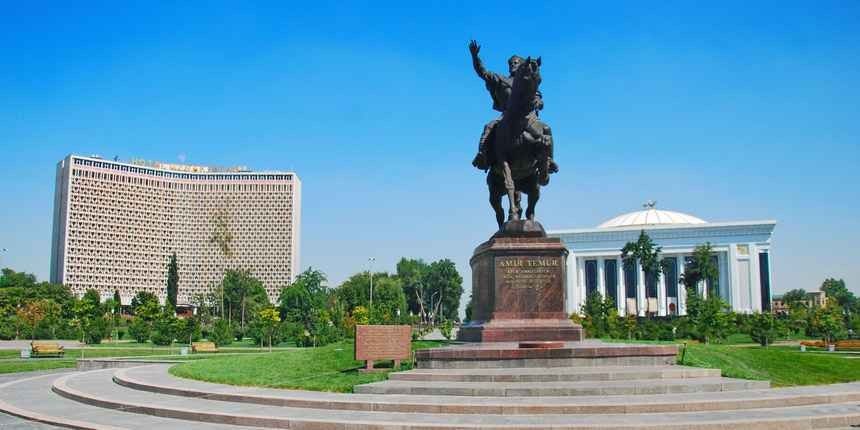 Also read: Information about the State of Uzbekistan

Unfortunately, Uzbekistan has not yet allowed citizens of Arab countries to enter its territory without obtaining a prior visa, although there are a number of nationalities who have the right to do so. The visa must be requested to enter Uzbekistan from the headquarters of its embassies or consulates around the world. There are some cases that allow it to obtain a visa Entry from the capital, Tashkent, including: The absence of diplomatic representation of the Republic of Uzbekistan in the country from which the flight began to Uzbekistan. Coming to Uzbekistan via an indirect flight from a country in which there is an embassy or consulate, but there was not enough time to obtain the visa.

Requirements for obtaining an entry visa to Uzbekistan

Invitation letter from a tourist company operating within Uzbekistan, a valid passport, fill out the visa application form, personal photos

The best means of travel to Uzbekistan is to book direct flights to the capital Tashkent. As for internal transportation, there are more than one method, including domestic flights, although most travelers prefer to travel by train to enjoy watching the local villages and green spaces that are among the most prominent features of tourism in Uzbekistan, as most agencies provide Travel and tourism is a car rental service for or without the driver for families and individuals. The city of Tashkent itself is served by a subway train that some consider to be one of the distinctive signs of the city that must be visited and hiking.

The most important tourist cities in Uzbekistan

In Uzbekistan there are a group of major cities that you will get to know as soon as you hear their names that you must have read about or have associated with in your mind famous personalities.

The city of “Tashkent” is the first destination for tourism trips in Uzbekistan, not only because it is the capital but also for the beauty of the city and its good coordination and the large number of green parks in its vicinity. Walk in the streets of “Tashkent” private tourism, there only you can see the imaginary buildings that were built in the Middle Ages alongside architecture Soviet with a socialist character known with modern European facilities. 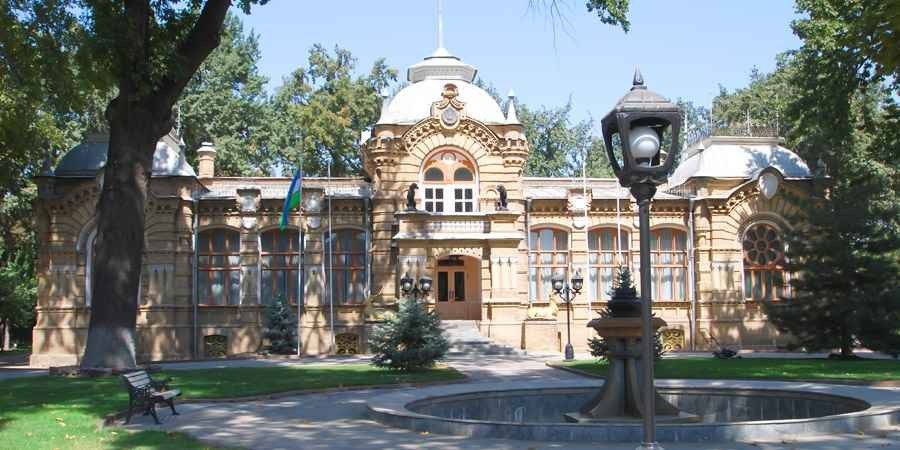 The old residence of Prince “Rakhmonov” is considered one of the most important tourist tours in Uzbekistan in general and in Tashkent in particular. The history of the construction of the palace dates back to the year 1891 AD in favor of Prince Rakhmonov, the grandson of the Emperor Nikolai I, who was exiled by his parents to “Tashkent” until he died in it In the year 1918 AD, the prince was fond of hunting, which made him increase the entrance to the palace with many bronze statues in addition to the interior decoration.

The television tower in Tashkent is one of the highest buildings in Central Asia, with a height of about 375 meters, and it is resistant to earthquakes that are less than 9 degrees on the Richter scale. There are at an altitude of 150 meters several halls that include modern restaurants serving European and Uzbek dishes alike. The platform is specially designed for tourists who want to take pictures of the city from the highest point.

The school was built in the fifteenth century and soon turned into a primary orientation center for Central Asian Muslims. The school houses one of the most important manuscripts libraries in the world, which includes some of the rarest copies of the Noble Qur’an and Islamic books. One of the stories that the library is told is that it includes the copy of the Qur’an from which the caliph was reading “Othman bin Affan” when he was killed and that the pages still kept the blood drops that he asked. 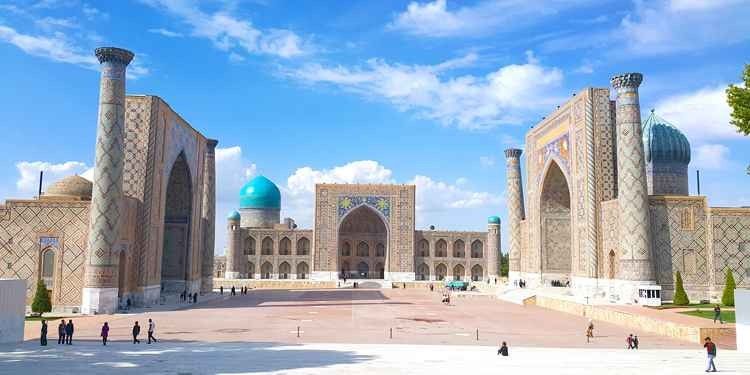 Samarkand is the second largest city after the capital “Tashkent” and it is believed that the date of its existence is similar to the history of the city of Babylon in Rome. Thus, the city’s age is more than 2,750 years during which many historical events have witnessed since the era of Alexander the Great through the Islamic conquest and the wars of “Genghis Khan”. The city is distinguished by its climate Cultural, which is a mixture of several nearby civilizations, such as Persian, Indian, Western, Arab and European. Given the city’s historical importance and its unique archaeological holdings, UNESCO has chosen it to be on its lists of human heritage.

Tourists like to call the “museum city” the city of “Khiva”, which for a long time was considered one of the most important commercial cities on the Silk Road. Many myths revolve around the city’s origin, including that people gathered around a cold freshwater well dug “Sam Bin Noah” still standing Until now.

Visiting the main markets is one of the most important tourism tours in Uzbekistan, as a city is almost empty of a major market.

Alay Bazaar is considered one of the oldest markets in Uzbekistan and it is believed to date back to the twelfth century AD. The market first started as a commercial station on the Silk Road to sell sheep and cattle and then later turned into a large market due to its geographical location. Now it displays in the market all kinds of goods From oriental sweets, exotic fruits to jewels, gold and silverware.

The Bazaar Chorsu market is one of the oldest markets in Uzbekistan as well, since its existence dates back to about 100 years ago. The market still retains some features of the old market such as high domes that protect sellers and buyers the sun’s heat. The Sharso market is an integrated commercial complex that displays all kinds of goods Like fresh and dried fruit, special Uzbek bread known as “libishka”, horse meat, clothes, etc. Read also: Tourism costs in Uzbekistan

Visiting Samarkand without visiting the Siab market means that the tourism trip in Uzbekistan is missing something !! The Sheyab market is located close to the most important tourist places in Samarkand such as the “Baby Khanum Mosque” and the “Hazrat Khaizar Mosque” as well. Form 5 lanes that sellers line up on its sides to sell vegetables and fruits in particular throughout the day. There are many other exhibits on the market such as dried fruits, refreshments, fast food, and sweets. The most famous goods in the Chiap Market are unique spices in their shapes and colors, and even rare types of them. The goods that attract the attention of tourists in the market are the “bread” from which there is more There are 17 different types. One visit to the Sheyab Market in Samarkand ensures that you get the latest news and developments of the city, where the market is the meeting place of local citizens and the place where you communicate their news. Tourism in Uzbekistan is a travel through time and space, it is a journey that takes you in its rich details, whether human or Historical.

A light trip to Beirut

The most important physical therapy clinics in the Czech Republic