Tourism in Vietnam … comprehensive information before traveling to Vietnam

Vietnam has a charming nature and a rich heritage, which attracts tourists from all over the world. Every day on Vietnam vacation is an experience and a new adventure. It includes a great diversity of tourist places such as; islands, coastal areas, caves, and green spaces. There are also areas that highlight the history and culture of the country such as; temples that highlight the influence of Chinese culture, Hindu religion in Vietnam.

Here is all you need to know about tourism in Vietnam..the scenic nature and ancient civilization

Conditions for obtaining a visa to enter Vietnam

Arab travelers can obtain an entry visa to Vietnam in two ways. The first is by going to the Vietnamese embassy in your country, or the region near you. Accompanying your passport, an invitation letter from any tourism agency in Vietnam, two personal photos, and a copy of the passport. The second method, which is the easiest, and best, is done through the Internet where you can apply for a visa for twenty dollars. When you arrive at Vietnam, your passport is updated with the visa at the airport. It takes two days to obtain the visa online. 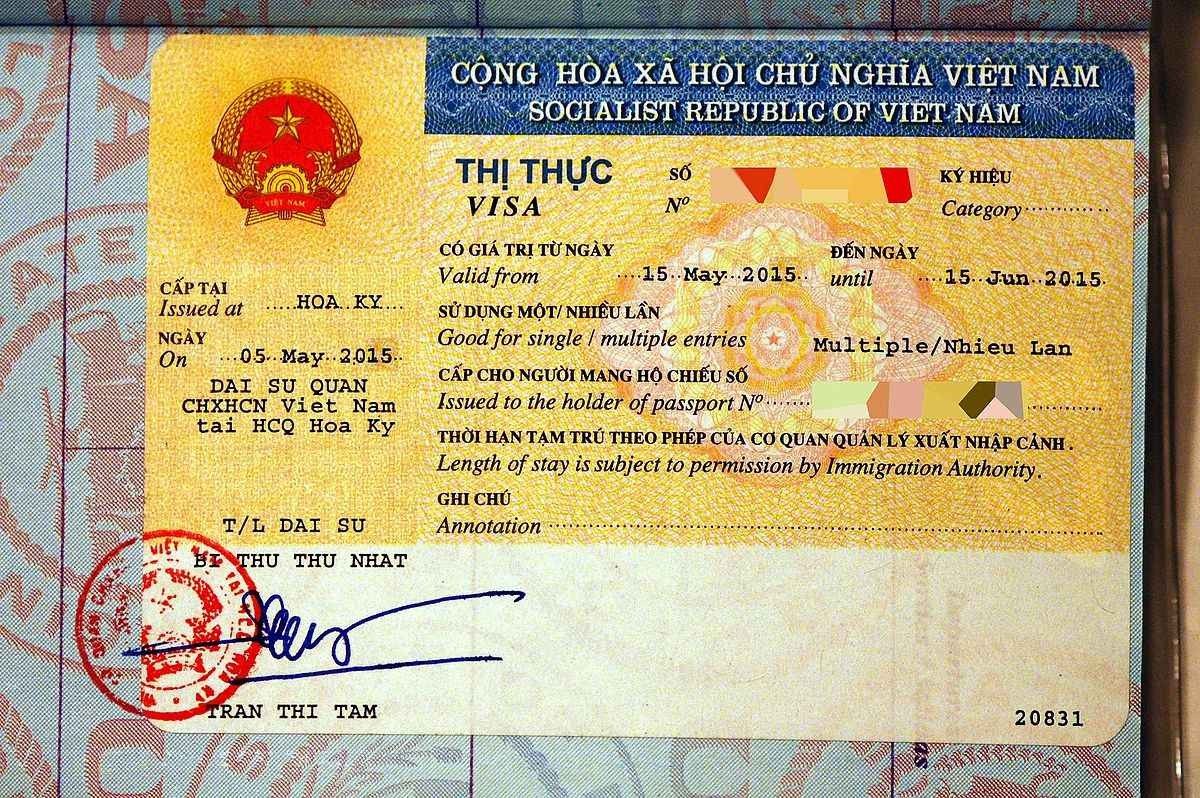 The best time to travel to Vietnam

The period between April and June, September and November is the best time to travel to Vietnam where; you can visit all parts of the country, and the prices in that period are low. The period between December and March is also appropriate; as the weather becomes mild, and the sky is clear in the south, it tends to decrease temperatures in North. It is also considered a period of celebrations and feasts and prices start to rise.

The most important tourist events in Vietnam

A traditional celebration, it is a national holiday that takes place for four days between January and February. The streets are filled with lights, festive appearances, and traditional food.

The Perfume Pagoda Festival is held near Hanoi, where Buddhist Vietnamese from across the country gather for the pilgrimage at the top of the Holy Mountain.

Hmong Spring Festival is held in the north, where; Hmong residents gather in cheerful marches, dressed in bright colors, and shiny with wonderful traditional clothes.

The popularity of tourism in Vietnam has increased recently due to the ease of procedures, including airlines. The plane is the best way to travel to Vietnam. There are many direct flights from the Gulf countries and other Arab countries to Vietnam. Either through Qatar Airways, Cathay Pacific Airlines, or Singapore Airlines.

Financial transactions are among the advantages of tourism in Vietnam, because they are flexible and easy, as you can convert any of your main currency such as the dollar and the pound sterling to the local currency. The conversion rate varies from one place to another so you have to research well, and the government bank is considered the best A place of transfer, known as Vetcombank, and it has several branches in major cities such as Hanoi and Ho Chi Minh. Make sure your money is new, with no harm. If it is old, or has any sermons, either the transfer agency rejects it, or the money transfer rate increases. You can also use visa, credit cards, and mastercard freely due to the availability of automated banks throughout the country. Read also: The most beautiful tourist places in Ho Chi Minh Vietnam 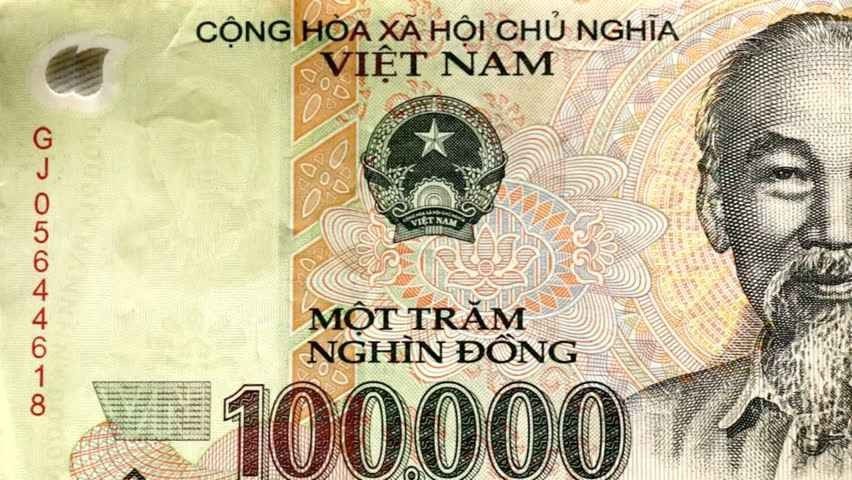 The cost of living in Vietnam

The Vietnamese currency is one of the lowest currencies around the world. So the cost of living in Vietnam is considered cheap, as the cost per day in Vietnam ranges between forty to one hundred dollars, depending on the standard of living you choose. One dollar is equal to 22711.79 Vietnamese dong.

Hotels are characterized by a huge diversity that suits everyone’s tastes and expenses, and that is another advantage of tourism in Vietnam. The closer we get to the center of big cities, the higher the price, and recently many luxury hotels and resorts were built near the country’s coast, and in the southern regions.

The most important tourist places in Vietnam

Vietnam is located between the South China Sea, Laos, and the Cambodia border. It is characterized by charming rice fields, mountains, valleys, and forests. This is beside the picturesque beaches in the south, archaeological sites, modern cities, and ancient colonies. This combination of tourism in Vietnam creates a varied experience, characterized by adventure and exploration.

A breathtaking panoramic view with its green water and limestone rocks scattered throughout creating a spectacle, more like a piece of paradise. Ha Long Bay is located one hundred and thirty kilometers east of Hanoi in the north of the country. It is considered one of the most important tourist places in Vietnam, as it includes two thousand islands that enjoy many natural appearances that attract tourists from all over the world. Such as; caves, lakes, and diving holes. 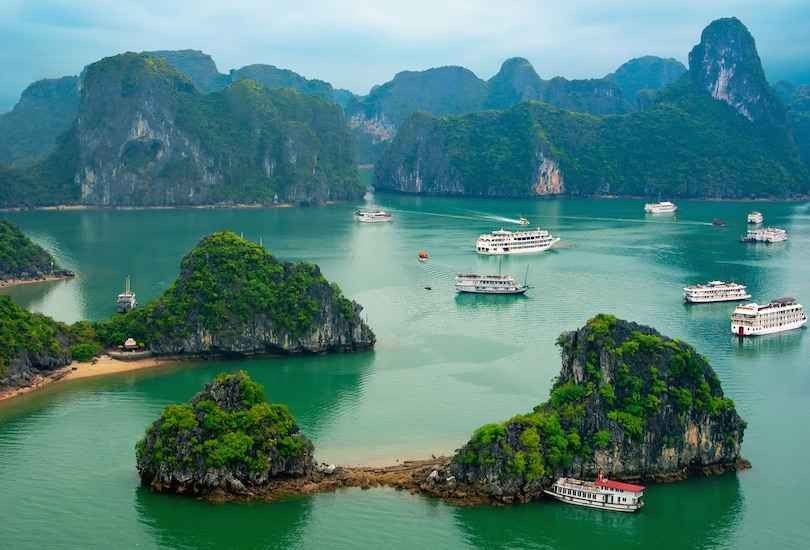 The capital of the country, and is one of the most important symbols of tourism in Vietnam. Central Hanoi has an open museum, so you can enjoy the atmosphere and history of the city. The museum includes many buildings that highlight the history of Vietnam; the time of the French and Asian colonization of the country. After you finish visiting the museum you can; enjoy a walk in the city streets, and you can sip a cup of coffee in one of the cafes that fill the place. You can also visit the opera, or the presidential palace , Or St. Joseph’s Church. If you get bored of all of that, you can go shopping at one of the city’s markets. 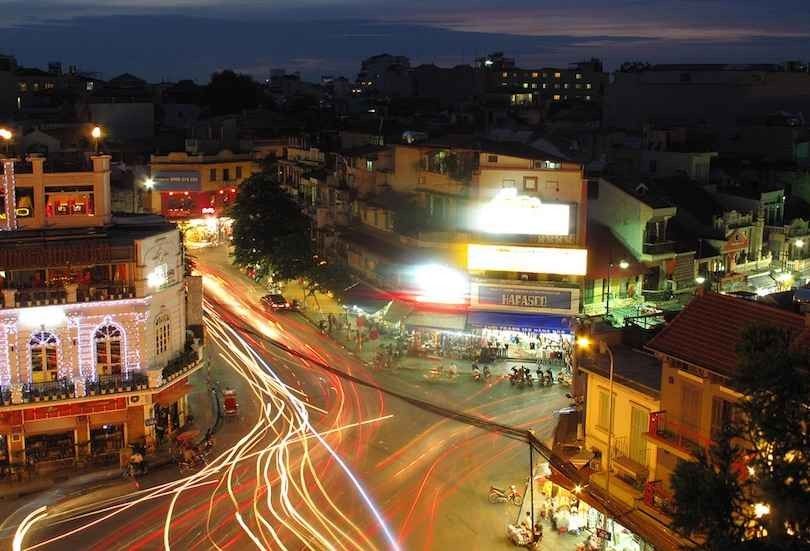 Hoi An is located on the coast of South Sea of ​​China, south-central Vietnam, and is a breathtaking ancient city, dating back more than two thousand years. It was established in the Kingdom of Champa, and is considered an important cultural and historical center in Vietnam. Located in the center of Hoi An, a small old city, which can be traversed entirely on foot. The city’s small lanes are full of wooden houses, old architecture, sewing shops, shoe stores, bags, souvenirs, and customized costumes. 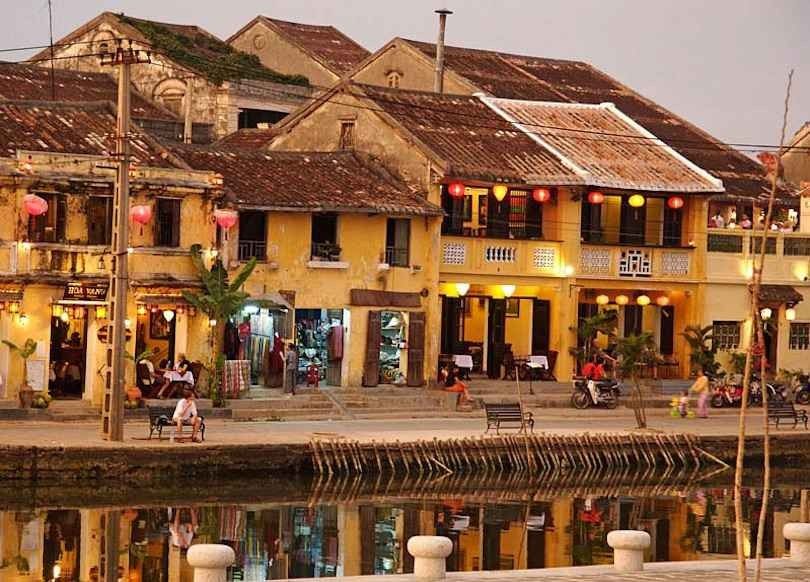 It is located on the bank of the Perfume River in central Vietnam, and was the capital of the Empire of the Nujin dynasty. Today the impact of that era is reflected on Hue architecture, culture and cuisine, which makes it one of the most important and best tourist spots in Vietnam. The castle is considered one of the most important monuments of the city; it includes a large palace, temples, walls, and ornate gates. This is next to the main landmark of the castle that stands out through the river; Than Mu Pagoda. 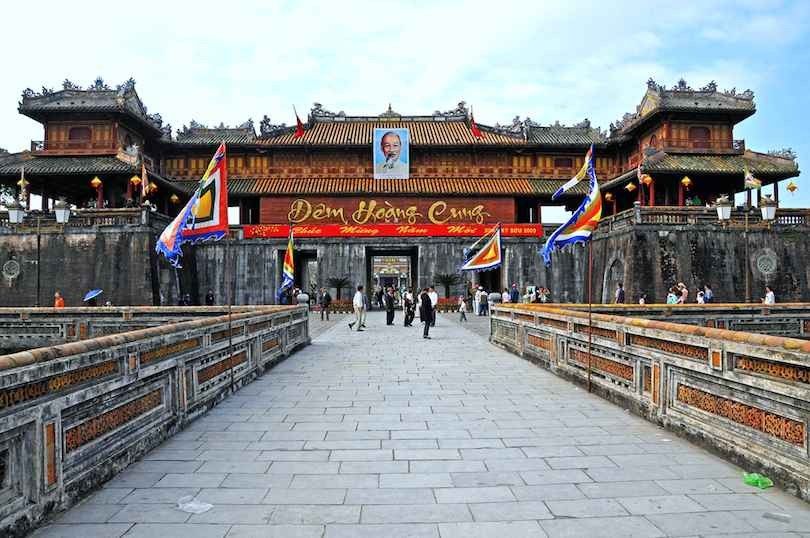