Tourist places for children in Pattaya .. Your guide to enjoy a special trip with your children …

Tourist places for children in Pattaya .. Pattaya is famous for having many gardens and parks that attract children and provide them with various recreational activities.

Tourist places for children in Pattaya .. 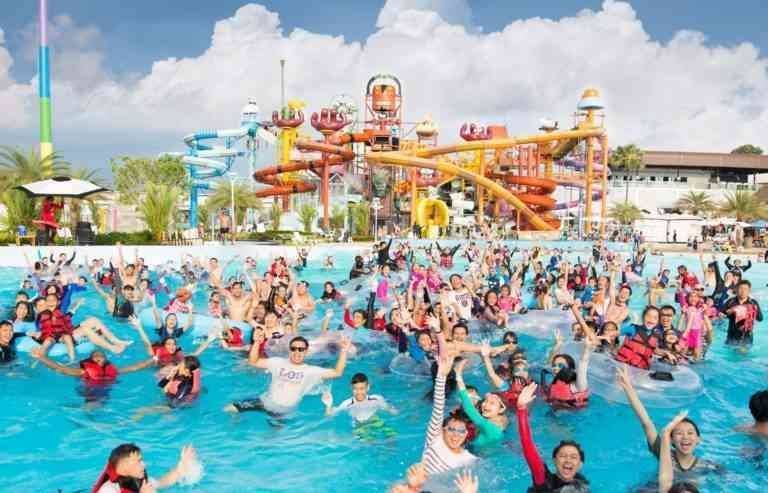 “Pattaya Park” .. It is one of the most beautiful gardens in the center of Pattaya, Thailand and we advise you to go to it with your children to spend a beautiful time in relaxing and in a number of recreational activities such as swimming where there are a number of swimming pools that suit children and help in their education and games such as flying saucer The express train, water games, and cable cars that provide a beautiful view of the garden when riding it in addition to the existence of places designated for children suitable for all ages. You can buy souvenirs from the stores located there and have a delicious meal in the revolving restaurant to enjoy a wonderful view of the beach. Garden at work from ten in the morning until seven in the evening. Also read: Tourist places in Pattaya 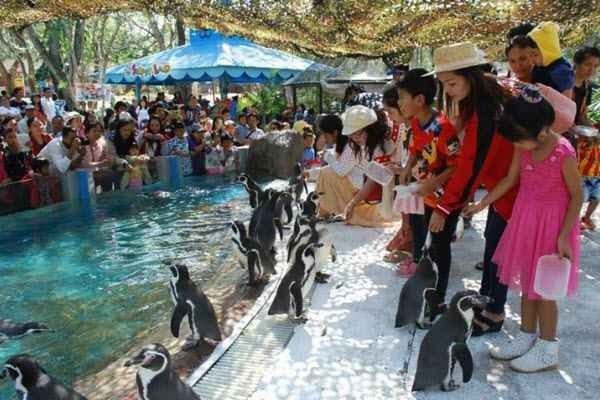 “Khao Khyu Zoo” .. It is considered one of the largest open zoos in Thailand. It is located in Chonburi area in Pattaya and has an area of ​​two thousand acres and large numbers of tourists go to it especially with their children because it includes about 8 thousand animals such as leopards and lions and elephants and other animals which are not inside Cages are even moving freely, so the park provides carts to move around the park and get to know all the animals and get close to them. You can also walk around in the places where this is permitted and the park organizes educational programs on animals. This helps children to increase their general information about wildlife and how To preserve the endangered species, and not to attend exciting performances, as the animals make beautiful and funny movements. They also contain various types of birds, including the penguin, and children can play with and feed him. 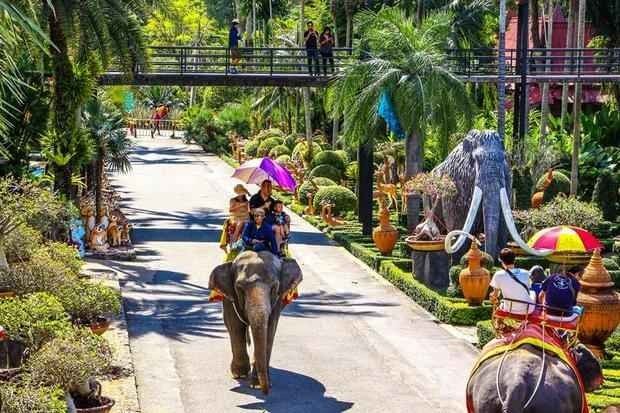 “Nong Nosh Garden” .. It is considered one of the most important and largest parks in Pattaya, with an area of ​​600 acres. It was established in 1980 AD and a large number of tourists and locals go to 5 thousand people per day so it has a great reputation and is characterized by stunning views of the Gulf And it specializes in tropical plants, which number about 18 thousand species, including palm trees, bromides, roses, orchids and seasonal flowers, and it has a garden dedicated to butterflies in addition to the garden’s interest in the artistic side, organizing a number of musical and cultural performances for all groups and traditional dances so you got a number of awards and you have to go to it A with your children to experience the elephants’ love riding for children and watching the different shows of animals such as elephant shows that are admired by young and old and the rental of a small boat for walks in the lake in addition to having safe and designated places for children and at the end of your tour you cannot miss a Thai meal in one of the restaurants located between the trees and take souvenir pictures and buy gifts Which will remind you of this beautiful trip, the park starts working from eight in the morning until six in the evening on all days of the week and the ticket price is 400 baht for adults and 200 for children. Read also: Popular and cheap markets in Pattaya 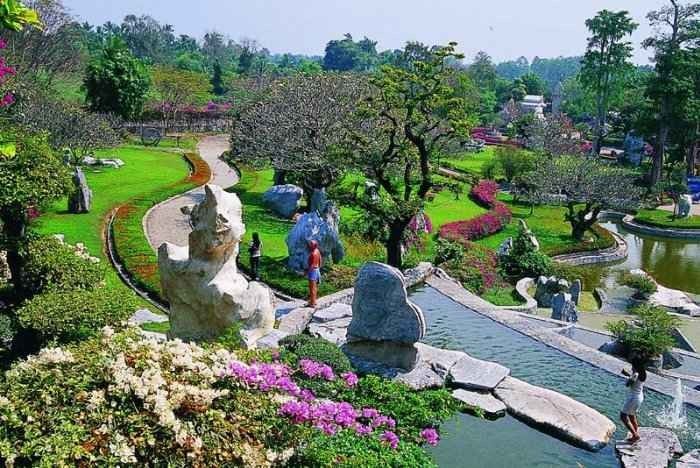 “Million Years Rock Park” .. It is considered one of the most beautiful and newest tourist destinations in Pattaya and has an area of ​​70 acres and is one of the places that are loved for children due to the presence of many marine creatures in it such as thousands of crocodiles as well as huge fish such as catfish and many endangered fish and also animals such as lions. Bears, tigers, elephants and other animals and various types of rare plants and Thai trees so you should take a tour with your children in the park to explore so it will help children to increase their information and spend a fun time and must take pictures memorial next to the wonderful statues on it A hundred animals and fossilized trees that date back more than a million years, this park is an open museum that includes animals, plants, statues and carved stones. The park organizes beautiful acrobatic paragraphs and circus shows, especially with predatory animals such as crocodiles, which are exciting shows and children are fascinated by watching them and you can take a rest and sit in the seats Sawmill in the park and have a hot drink. The park provides a restaurant overlooking the lake, where you can eat your meal or eat it in the trees. The garden starts working from eight in the morning until six thirty in the evening and entrance fees are 300 baht for adults and 150 for children. 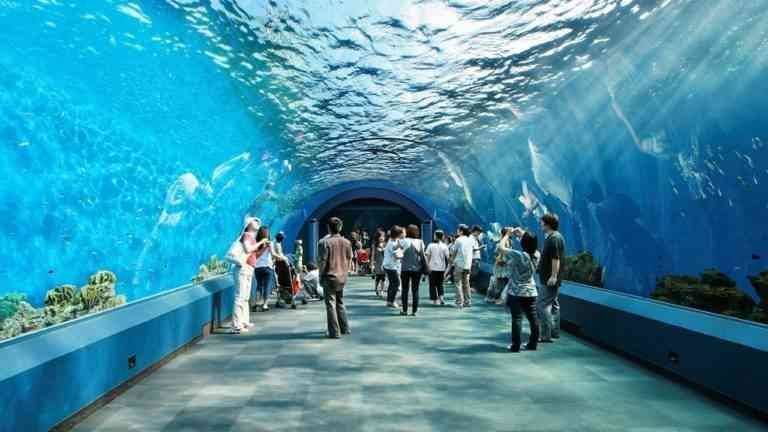 “Underwater World Park” .. It is one of the most famous water tourism places in Pattaya and in the south it is characterized by the presence of a large number of marine organisms by Faisal. The number of species there is 4 thousand species, including what is rare such as guitars and sharks, the depth of up to a hundred meters and a thickness of 6.5 It has a tunnel with visitors moving to see the enchanting marine life and they are 3 tunnels, a tunnel with many types of wonderful coral reefs and a tunnel for the remains of ships and traditional and small fish species and a tunnel that includes predatory creatures such as sharks and other marine creatures living in the depths of the sea so visiting this world is sure dear the tourist That you will spend The best times with your children especially when watching diving shows with sharks and do not forget to take souvenir photos for these beautiful moments, it starts working from nine in the morning until five in the evening, the entrance ticket price is 250 baht for adults and 150 baht for children. Read also: travel advice to Pattaya ..

“Cartoon Network Amazon” .. This park is considered one of the most beautiful tourist places in Pattaya, was established in 2014 and is suitable for children as it has many recreational activities such as Disney figures, paragraphs of Gumball, Ben Ten and other famous personalities and acrobatic performances where dolls move between children to pick up Commemorative photos with it, as well as various water games, you can practice swimming with your children and teach them in pools with low depths suitable for them. The park also contains about 150 water games that suit children and are safe under the supervision of specialists such as the water train or the rubber boat that will bombard you. In a water basin, it is sure that your children will spend an exciting and exciting time trying such games, and if you love surfing then you should try Survina game and after playing various games and spending time you will not forget with your children, you can go to the open restaurant to eat a local or international delicious meal, the garden begins At work from ten in the morning until seven in the evening. 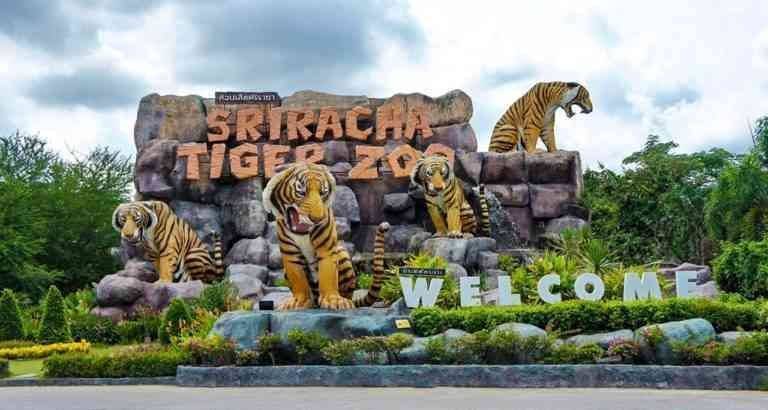 The “Tiger Park” is considered one of the most beautiful zoos in Pattaya and has different animal species of up to 200 species. It was opened in 1997 AD and it was called this name because it contains a large number of Bengal tigers besides crocodiles, birds and rare types of living creatures. Its young and feeding and taking pictures with it must be liked by children as well as attending crocodile shows with trainers in addition to watching how predators and pets live in the same place as tigers and dogs and participate in feeding it it is amazing to see that and you have to take a tour in the park to get to know it and hike between the Quarrel on foot or by riding an elephant and the park provides a restaurant that serves delicious Thai and Chinese dishes as well as beautiful gift stores. The park starts working from eight in the morning until six in the evening, and entrance fees are 250 baht for children and 450 for adults. 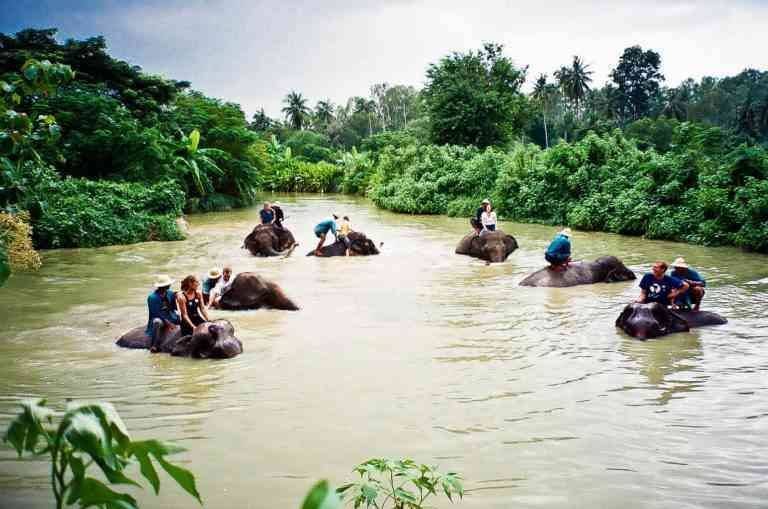 “Pattaya Elephants Village” .. Children all over the world love elephants, so your children will surely be happy to visit a village dedicated to elephants. It was established in 1973 AD. The village shows visitors how elephants live, how they are caught, and their shows are held every day in addition to a decorated procession of elephants to explain how elephants participate In wars in the past, as well as music and dance festivals, the most popular activity for visitors is watching elephants bathing, as the elephants are used as a transportation method in the village and you can approach the elephants to play with them and feed them and ride them individually or collectively and go on a half-hour trip to visit the fields And get to know the simple life of the villagers, this trip is organized 4 times per day or a forest trip. You can rent a boat and go on a wonderful cruise. The village also contains a silk house that displays information about the silkworm and we advise you to buy souvenirs from it and then eat Thai seafood dishes in the existing restaurant. In the village, you start working from eight thirty in the morning until six in the evening and the ticket price is 1600 baht per person.

Family night venues in Alexandria … the Mediterranean bride for all individuals

Tourist places for children in Europe..The ideal place to delight children and spend a special holiday ..