Tourist places in Madrid .. A tour in the capital of the Kingdom of Spain!

The Kingdom of Spain has many attractions in Madrid, as the number of tourists increases in Spain in the summer season, in order to feel relaxed, but the capital of Spain is not the place to relax because you will definitely want to see all the scenic spots in Madrid.

A picturesque medieval city 75 km away from Madrid, but it is definitely worth a visit as this city has been classified as a World Heritage Site by UNESCO, which has drawn attention to this city. The city is filled with many tourist places such as temples, monuments, museums, etc., and while walking in Toledo you will find many shops that sell souvenirs in order to remember this picturesque city. If you do not have a car, you can take the train from Madrid to Toledo and the duration of the train going will take half an hour Just. 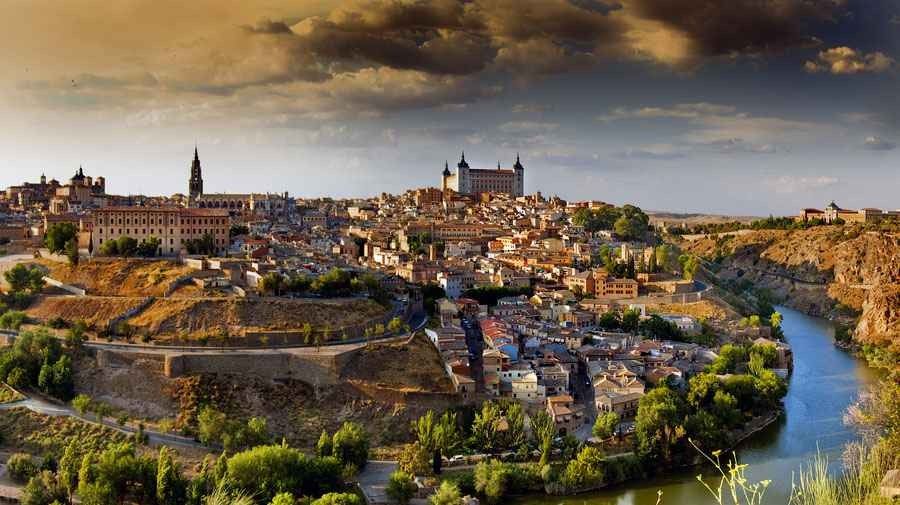 One of the most attractive places for locals and tourists is the Del Retiro Park, which was originally created as a place for the recreation of the royal family and in the late 1700 the park was opened to visitors. One of the places we recommend you to visit is the lake where you can see the huge columns of the memorial of Alfonso XII of Spain and after seeing The monument You can rent one of the boats and take a tour around the lake. But do not forget to visit the Palacio de Cristal Palace or as some call it the Glass Palace and it was built in 1887 AD. One of the most famous and beautiful palaces in Madrid, and glass has been used in the front of the palace and in This The place all you will do is enter the palace and reflect on the sunlight that flows through the glass panels. 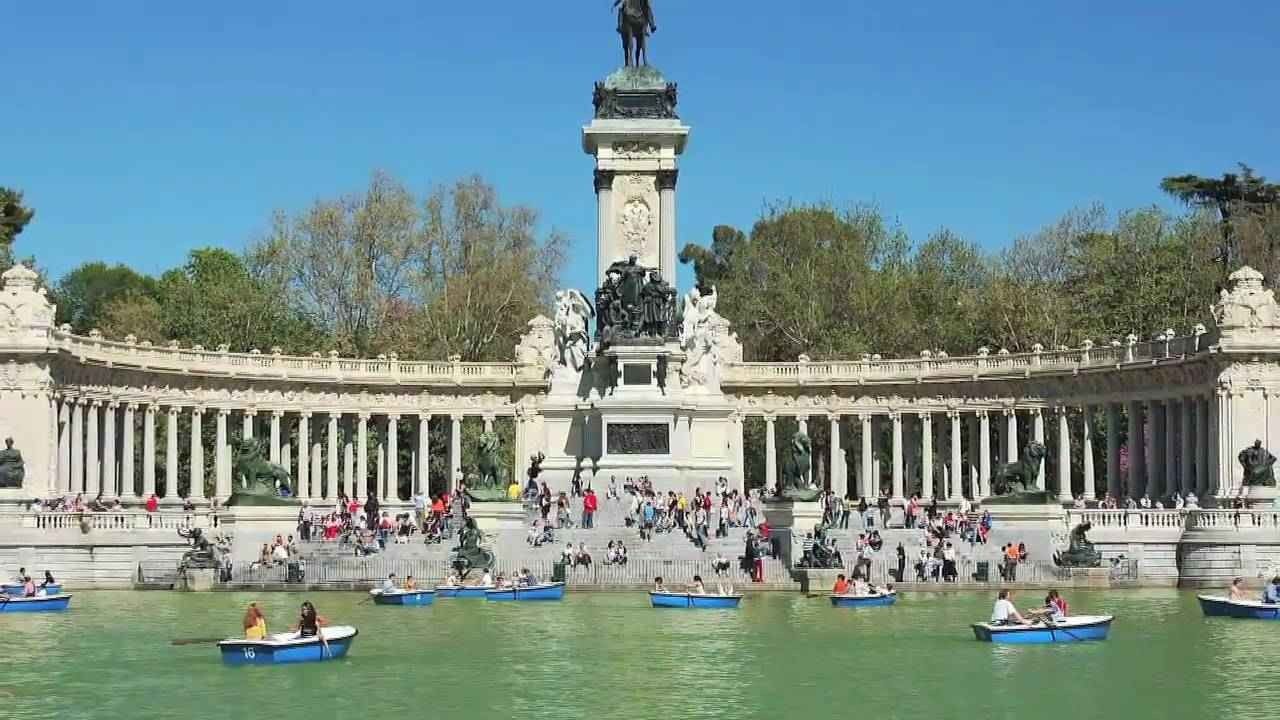 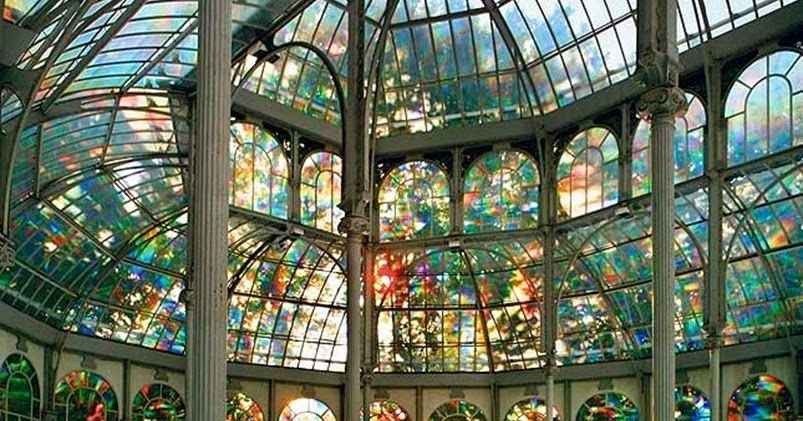 One of the most famous tourist places in Madrid is a famous museum of art, and this museum was created to be a modern addition to the Prado Historical Museum. The museum was officially opened by Queen Sofia in 1992 but the museum was originally built to be a hospital, and the museum was expanded in 2005 with New architecture designed by French architect Jean Nouvelle. The Reyna Sophia Museum is home to a wide range of charming works created by Spanish artists, including wide collections of artworks by artist Pablo Picasso. 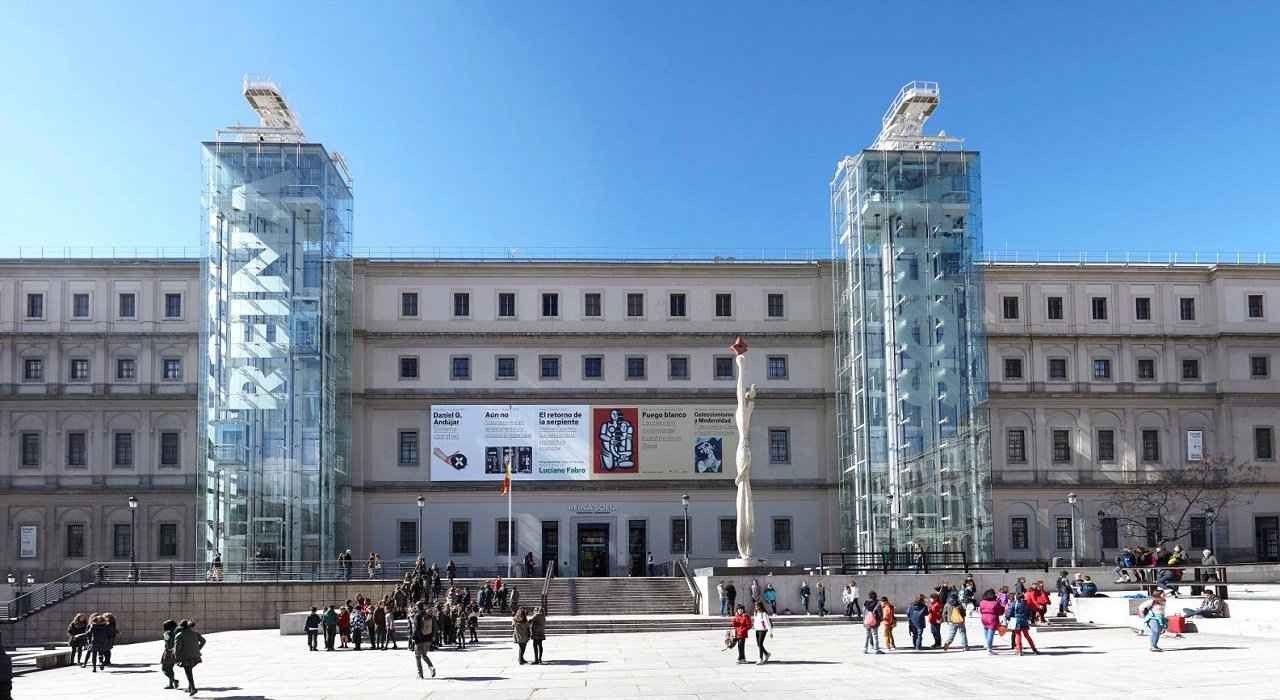 San Miguel Market is located a short walk from the Plaza Mayor which is a historical landmark in Madrid. The market was established in 1916 and is now one of the oldest and richest markets in Madrid. San Miguel Market is a popular shopping destination where you can find all foods The local, with the picturesque glass market walls of the twentieth century, can be considered among the most famous examples of creative architecture in the Spanish capital. 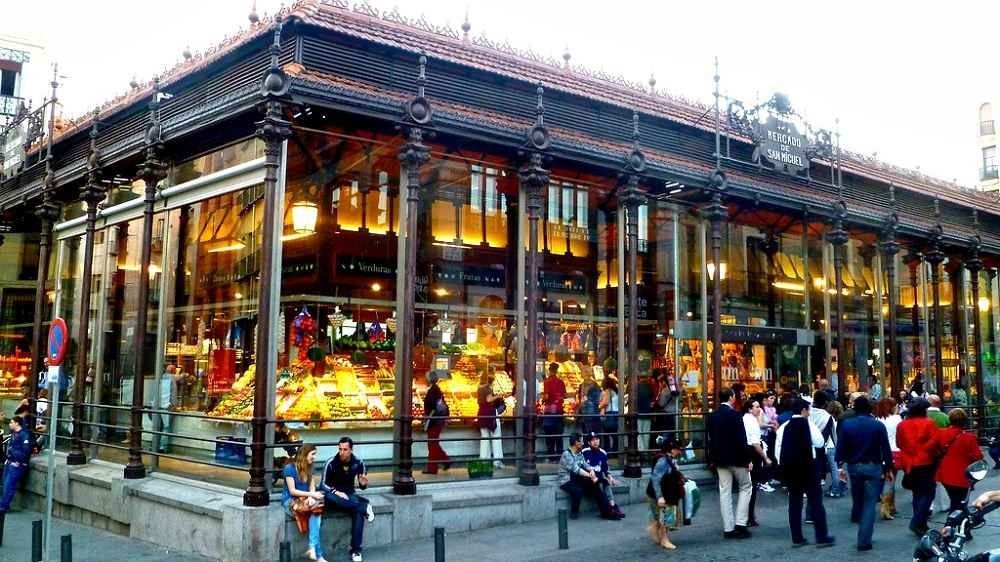 If you want to relax a little, you can visit this beautiful beachfront located in Madrid in the river. People flock to the sandy beach at the weekend where they can swim, rent boats and take picnics around the beach. The beach is an hour’s drive from Madrid but definitely worth a visit. ! 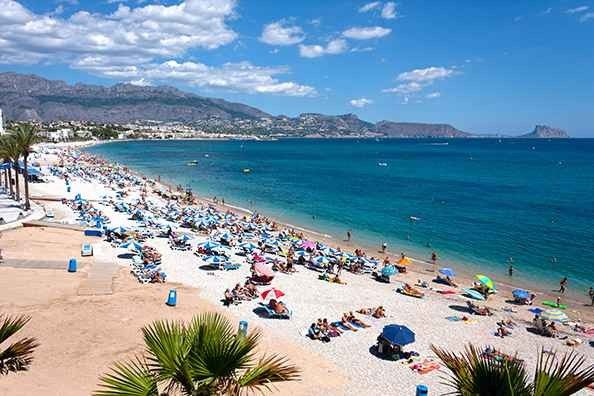 Rio Madrid is one of the most visited areas by the local people, especially summer. You can find three pools and a walkway along the Manzanares River, which is located in the heart of the Spanish capital, Madrid. And if you want to hide away from the high summer heat, Frio Madrid is a place Great for that as you can find many green spaces along the river with many activities like bike rental and hiking tours. 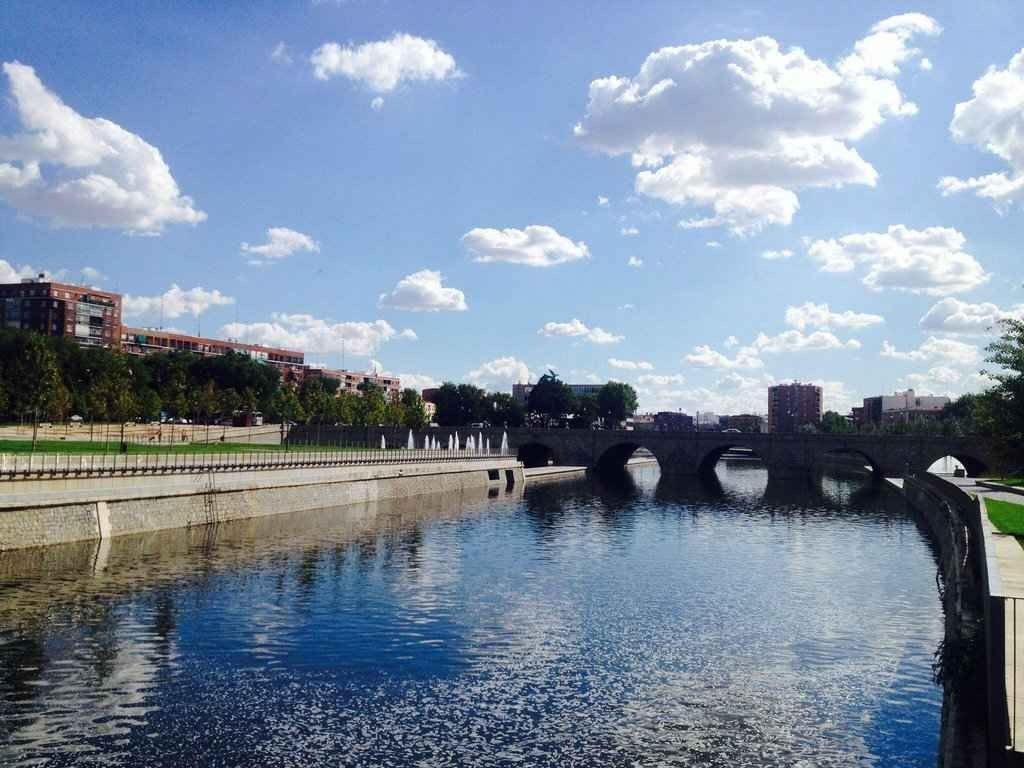 A famous temple located near the royal palace, a park near the royal palace, the temple was originally an Egyptian temple where the construction of the Aswan Grand Dam in Egypt had threatened many historical monuments due to the floods, and in order to preserve and protect them, Spain provided assistance, and as an expression of gratitude the Egyptian government gave Debod Temple to Spain in 1968. 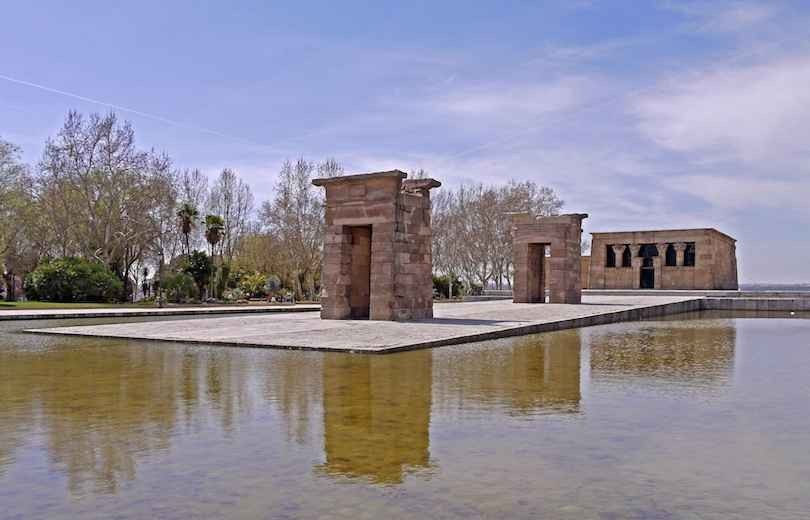 You can say that this street does not sleep !, and this street attracts many tourists from around the world, but this street is relatively modern as it was completed in 1910, and hundreds of Spanish and international shops, restaurants, and companies lined up with it, and the most famous building there is a company Telefonica is the third largest telecom company in the world and it was the tallest building in Europe when it was completed in 1929. 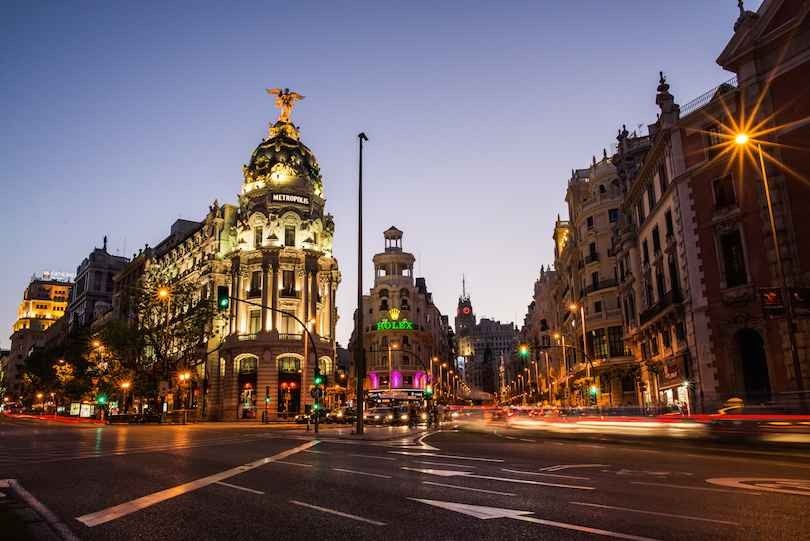 Gran Via – Gran Via

It is a famous historical landmark and it is one of the most important tourist places in Madrid, it is one of the most famous luxury squares in Madrid and is called the heart of Madrid, and the history of the square dates back to the year 1619 AD. The square is a tourist place where many national celebrations take place. A statue of King Philip III is centered in the square. You can also find two of the oldest skyscrapers in the world next to the square. 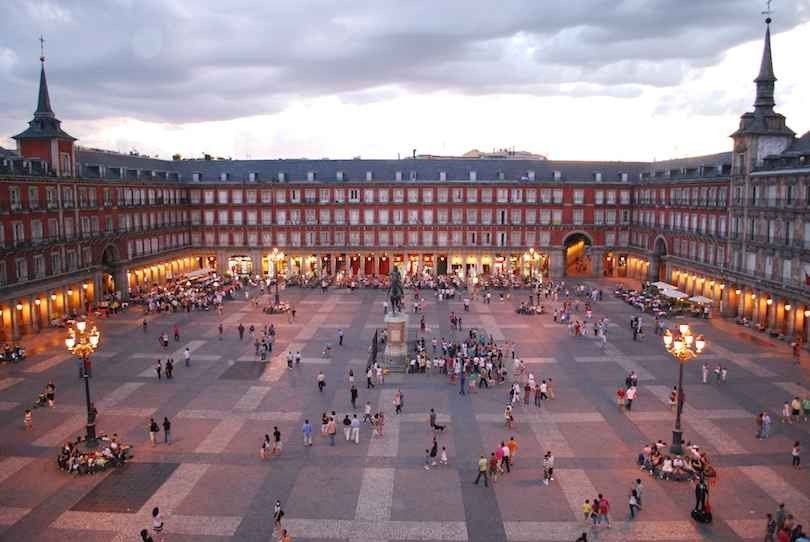 1. Palacio Real – Royal Palace of Madrid (Palace of the East):

The palace was built in 1764 AD with more than 2500 elegantly decorated rooms where the palace was built to be the residence of Carlos III. The last king to live there was Alfonso XIII and Victoria Eugenie in the early 1900 stove This palace was considered as one of the finest European palaces where it was designed Italian style. Now the palace has become a famous historical landmark in Madrid and has become a major place held in national celebrations and official banquets in the dining hall. In this palace you can visit the gardens and take a tour of the halls and royal rooms in addition to that you can visit the Palace Museum. 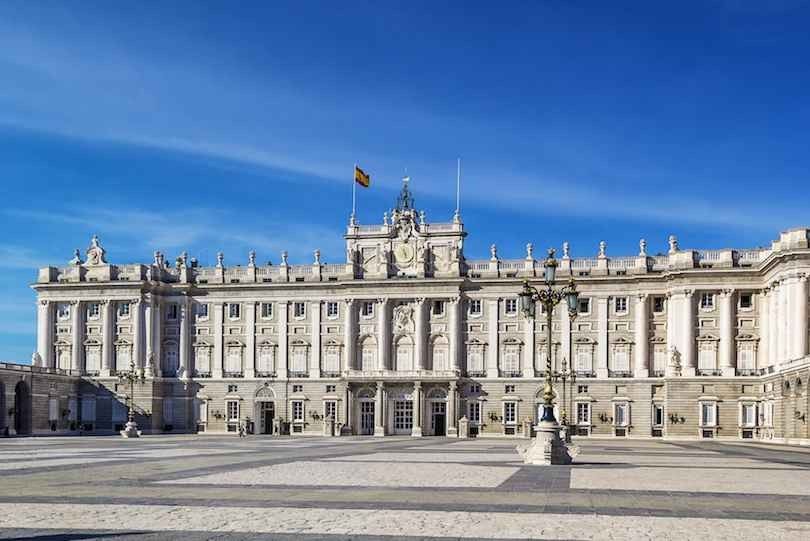 Palacio Real – Royal Palace of Madrid (Palace of the East)

The most important driving laws in Europe

How to drive from the right easily