Tourist program in Jakarta .. Jakarta is the capital of Indonesia so it is one of the most important tourist destinations and we advise you to visit it to see the beautiful natural monuments in addition to the monuments, Arab travelers give you your tourist program. 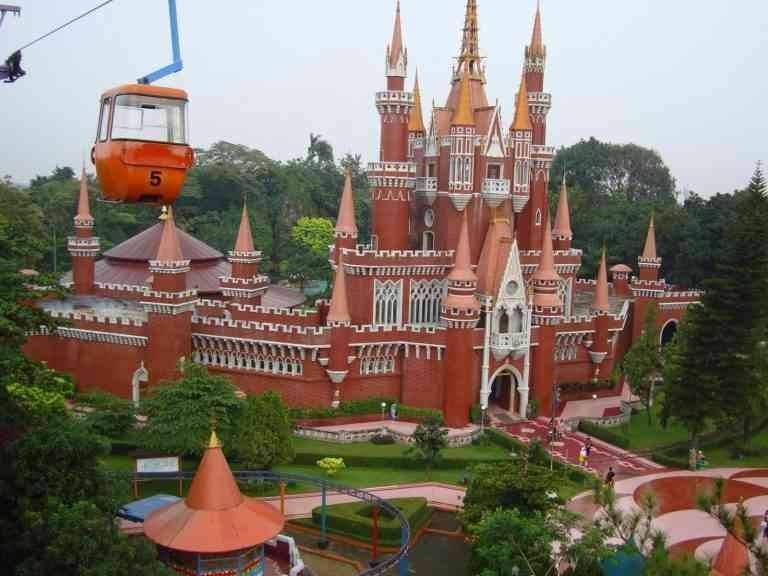 – The first day “Ancol Dreamland – Taman Mini Park Jakarta” .. “Ancol Dreamland Park” is located on the Bay of Jakarta so it is one of the most beautiful recreational parks in the region, where lovers of calm and nature go to it is far from the city center and has a lot of activities that You will definitely like it, you have to try the express train that takes you on a wonderful and interesting tour, as you can ride bicycles and take a walk in the middle of this beautiful atmosphere where the air is fresh, then you should go to the tunnel under the water to see a beautiful marine life up close where fish of various types There are also sharks in it, you can’t miss it Cut memorial pictures next to it because there is no separation between you but transparent glass and you have to ride the cable car as it is one of the most beautiful activities of the garden and you can get a wonderful panoramic view of the garden and its surroundings, the garden also provides a zone for playing water games with a view of the sea and you can swim with it, it is fun Also attend the beautiful dolphins shows especially if you are with your family because the children are happy with that. “Taman Mini Jakarta Park” is located east of the capital and it is the ideal destination for many tourists as many wonderful tourist attractions then you should visit the museum in it to learn about Indonesian history, p You can wander in the park to inhale the fresh air and relax among the trees, then go to the lake to ride a colorful boat and fishing, there is a place to sell books if you love reading, buy whatever you want, if you feel hungry you can have a snack from the restaurants in it and if you are In the company of your children, you must enter the traditional palace of children where he simulates the myths that they see in cartoon films and offers fun activities such as coloring, drawing, 4D cinema in addition to children’s clubs, the park organizes art shows in the closed hall and starts working from seven in the morning until ten in the evening As for Entrance fee 10 thousand rupees. 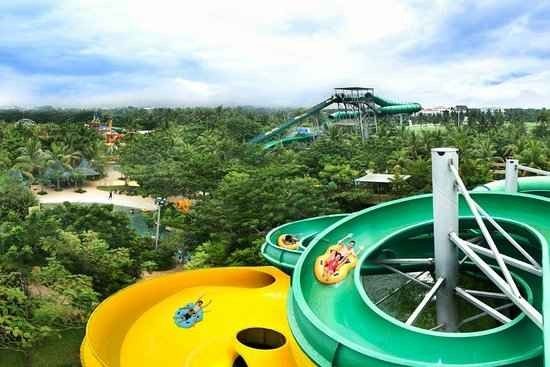 – The second day, “Waterboom – Taman Angelic Mall” .. “Waterpark” was opened in 2007 to become one of the most important tourist destinations in the region, distinguished by its view of the beach and of course you will enjoy being in it where the beautiful pools and different water games that suit the ages Different even children In addition to swimming pools of different depth, you have to enjoy the outdoor seating where the trees are around you and you can play football with your family or friends or ride bicycles, do not miss to take memorial photos for these special moments, the garden begins to work from eight o’clock Morning until nine o’clock in the evening on Saturday and Sunday. As for the rest of the week, it starts at ten o’clock in the morning. “Taman Angelic Mall” at night go shopping with it as it is one of the best malls in Jakarta, it contains about 500 shops and consists of 7 floors, buy your needs from it in addition to souvenirs and if you are an ice lover then the mall has a ski hall, starts at Work from ten in the morning until ten in the evening.

– The third day “Raghunan Zoo – Seto Papakan Lake” .. “Raghunan Zoo” You must go to it Dear tourist to see a lot of local animals, it was established in 1864 AD and the park is characterized by its large area which reaches 140 hectares as it is a natural reserve given Because it contains about 550 species of animals and plants from Indonesia and other countries, when you go to it you will see animals such as buffaloes in addition to birds such as Paradise birds and overlapping tropical trees and savannah weeds, there is a beautiful lake park in which the swans and Australian ducks live and you can ride a boat with it in the past In that there is a river in it and the hippopotamus and crocodiles live in it. One of the most beautiful activities that you can do is ride a tiger train that takes you on a tour around the park and it is very popular with children. The park starts working from seven in the morning until four in the afternoon on weekdays Except on Monday, the entrance price is 4000 rupees for adults and 3000 rupees for children. After visiting Raghunan Zoo, you should go to “Seto Papakan Lake”, which is only about 5 km away, it is an artificial lake and is one of the most important tourist places in Jakarta that was opened in 2000 m and an area of ​​32 hectares, fed by n Ciliwung cat is an ideal destination for fishing because it contains various types of fish even ornamental fish do not miss the boat ride to rowing and enjoy this natural atmosphere, when you visit you will be able to get acquainted with the lifestyle of the local people in Jakarta where traditional folk food and strange rituals held in This area is in addition to the simple traditional houses. The area starts operating from six in the morning until seven in the evening. 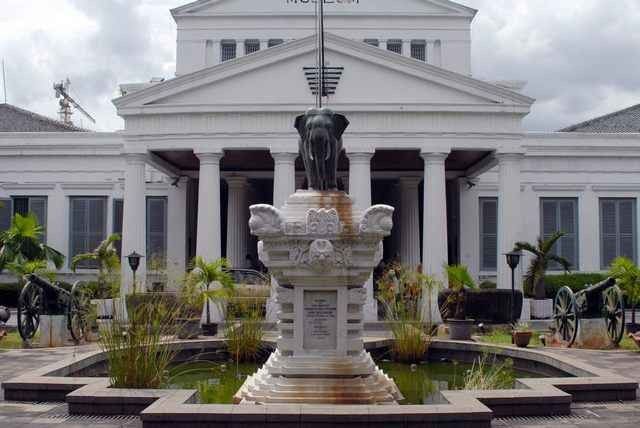 – The fourth day “National Museum of Indonesia – Monas Jakarta” .. ““ National Museum of Indonesia ”was opened in 1868 AD and the locals call it the Elephant Museum due to the presence of a bronze statue in the form of a huge elephant at the entrance to the museum, the museum is characterized by its beautiful architectural design In addition to its valuable contents, the bronze elephant statue dates back to the reign of King Rama the Fifth, which he gave to the museum in 1871 AD. The museum provides guides to provide various information about its possessions, it includes about 140 thousand artifacts belonging to thousands of years and there is a garden with a number of wonderful sculptures, the museum begins At work from the o’clock Safe in the morning until five o’clock in the evening, all days of the week except for the two, as for entry fees 10 thousand rupees. “Monas Jakarta Tower” The tower represents a symbol of freedom and independence for the country against Dutch and Japanese colonialism. It was opened in 1975 AD and has an area of ​​80 hectares and a length of 132 meters At its summit is a statue like a flame of fire made of gold-plated copper to express the spirit of the Indonesian people and its refusal to occupy, the tower provides football fields and gardens, you have to climb to the top of the tower to get a wonderful view of the city and also visit the gallery in it to see historical paintings and exhibits alongside Sitting in the garden to the east Prosperity among the flowers, there is near it the famous Istiklal Mosque for you to visit it because it is one of the most beautiful mosques in Jakarta. The tower starts operating from seven in the evening until midnight except for Monday at the end of each month.

The fifth day “The World of Seas in Jakarta – Abu Nawas Restaurant” .. 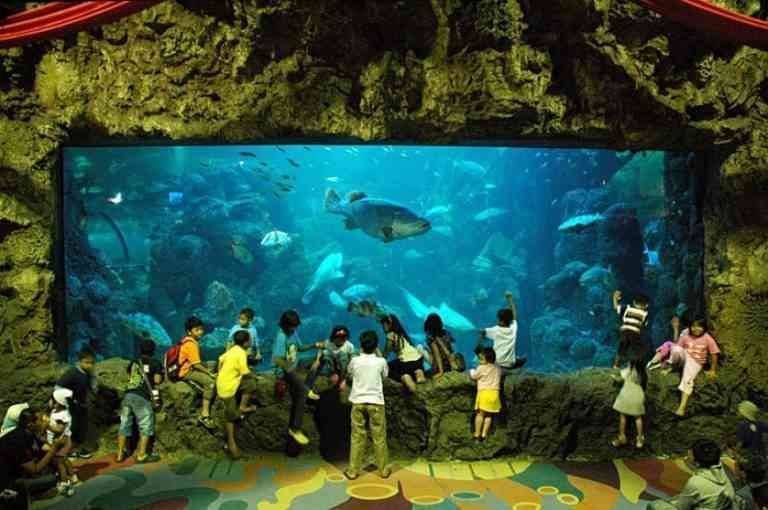 – Fifth day “World of the Sea in Jakarta – Abu Nawas Restaurant” .. “World of the Sea in Jakarta” is one of the most important tourist destinations also because it provides a set of beautiful entertainment services, there is a huge fish tank that includes many types of fish and coral people and different marine organisms Which has a number of 5 thousand species, and there is a fish museum that shows a lot of information about her lifestyle, you must attend the beautiful entertainment shows such as dolphins. These types of shows help increase children’s information and easily communicate them to them. Of course, taking pictures of these moments is a wonderful thing, the park begins At work from For the hours of nine in the morning until six o’clock in the evening, seven days a week. “Abu Nawas Restaurant” Dear tourist, eat your meal in the Arab restaurant Abu Nawas, which offers a group of delicious Arabic food, such as delicious appetizers, or Al Nafoura Restaurant that offers delicious Lebanese meals, then you have to do a free tour in the streets Jakarta and take souvenir photos with it.